Music crowdfunding has become a popular method for financing a new album these days. And, with many record labels participating less and less in the production of a recording, it doesn’t seem to be going anywhere.

With the likes of Kickstarter, Indiegogo & Patreon (to name just 3), there are plenty of options for setting this up – as well as creative ideas for what to offer people in return for stumping up their cash in advance.

For this article, I handed over the keys to Jazzfuel to US-based saxophonist & composer Mike Casey to share some tips from his own music crowdfunding success.

Over to you Mike!

[2021 update: the campaign Mike describes here was run the popular PledgeMusic platform – which has since had a very public decline into bankruptcy proceedings. However, the strategies and tips he shares – from preparing to launch through to the content you’ll need – are applicable to all types of campaigns, so there’s still a lot you can take away from this one!]

My name is Mike Casey and I am a passionate jazz saxophonist & songwriter. My debut album, “The Sound of Surprise: Live at The Side Door” came out in February 2017 and I used PledgeMusic (and a few strategies I outline below) to help me reach 111% of my crowdfunding goal in under 30 days.

My goal with this article is NOT to re-hash the same “10 tips for music crowdfunding” that you’ve seen a million times. While the fundamentals are essential, I think you’ll find this article delves a little deeper into advanced strategies that, when used properly, can be extremely effective.

First of all – what is music crowdfunding?

Dictionary.com defines crowdfunding as “the activity or process of raising money from a large number of people, typically through a website, as for a project or small business.”

And guess what? Your fans, friends, and family WANT to support you. All you have to do is have a platform set up that enables them to do so. Crowdfunding lets you do this in a manageable way.

If you plan ahead, research, study, and execute properly, you’d be surprised by how much a crowdfunding campaign can do for you:

First off, lead time is key.

Admittedly it took me way longer to set up the campaign than I originally thought. Luckily my PledgeMusic campaign manager, Mike Blatt, helped me greatly through the initial set up process. I’d highly recommend looking at other artists’ successful campaigns (whether on PM, Kickstarter, or Indiegogo) to get a sense of pricing structure and also to inspire you to come up with unique offers for your fans.

Once you launch the campaign, DON’T immediately announce it to all your followers on social media. Instead, keep it off social media and only send the campaign to your email list, close friends & family, and your biggest supporters. Why?

In my case, I was able to reach 88% funded during my pre launch period. I chose to have a long pre launch phase (2 weeks), because PledgeMusic gives you 60 days to reach your goal. When I announced the campaign publicly, many were amazed that I was already at 88% – this helps convince people who may be on the fence contribute to help push you over the top.

Public launch DAY (yes, it should be your main focus that day)

Your campaign video is key for two reasons:

Instead of posting a link to my campaign on Facebook, I uploaded the video directly to Facebook, made a long status and tagged everyone involved in making the album, and included a link in the bottom. Tagging folks involved in the album is not spammy – it will show on their profile and this helps get the post more views/engagement.

Post the video/announcement between 8:30am-10:30am. This is the best time to make a big announcement, and if done correctly, will have a lot of engagement initially. This initial engagement will help that post get more views throughout the day, as all social networks algorithms take good care of high quality content that has proven to be engaging. The earlier you post, the higher your chances of gaining enough engagement so that Facebook (for example) will keep showing the content throughout the day to people who follow you.

Tip: Write the post in advance so that all you have to do the day of is copy & paste.

The first sentence of the status should grab the reader and encourage them to read more. At the same time, it can’t reveal what it’s about. Dole out more information bit by bit in the post to ensure people keep reading. For example, my headline was “Here’s the big announcement!”

It’s an announcement so be sure to spell check everything and make it sound as official as you can.

After you post, stay by your computer. Your launch day work has just begun! I can’t stress this enough.

@reply people & thank them for retweeting/liking. Do you have an existing pinned post that people have engaged with? Go back and individually @reply each person that interacted with THAT post and tell them to check out your latest pinned post for a huge announcement.

Reply to every comment, to help spur engagement and make Instagram’s algorithm take notice of your post. Go back to all your previous photos and @reply people who have commented, telling them to check out your latest post for a huge announcement!

Just 24 hours later, here are my results from following these launch methods: 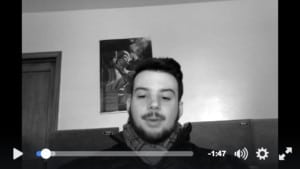 EXCITING NEWS: My debut album (recorded live @thesidedoorjazzclub) is available for pre-order on @pledgemusic! Pledgers get access to exclusive content + advance copy of the album! We're already at 88% of our goal and we need your help to bring the album to life! Link in bio 🙂 thank you for your support!

Twitter: 4,491 impressions, 118 total engagements including 20 retweets (including one from music industry heavyweight & PledgeMusic founder, Benji Rogers), 29 likes. These numbers may seem low – but keep in mind Twitter has the least engagement of any platform.

I truly hope these tips help you in your own music crowdfunding endeavours!

We’ll personally pitch your upcoming release to the right press contacts… and follow up with them.