Ten of the Best Recording Studios in London 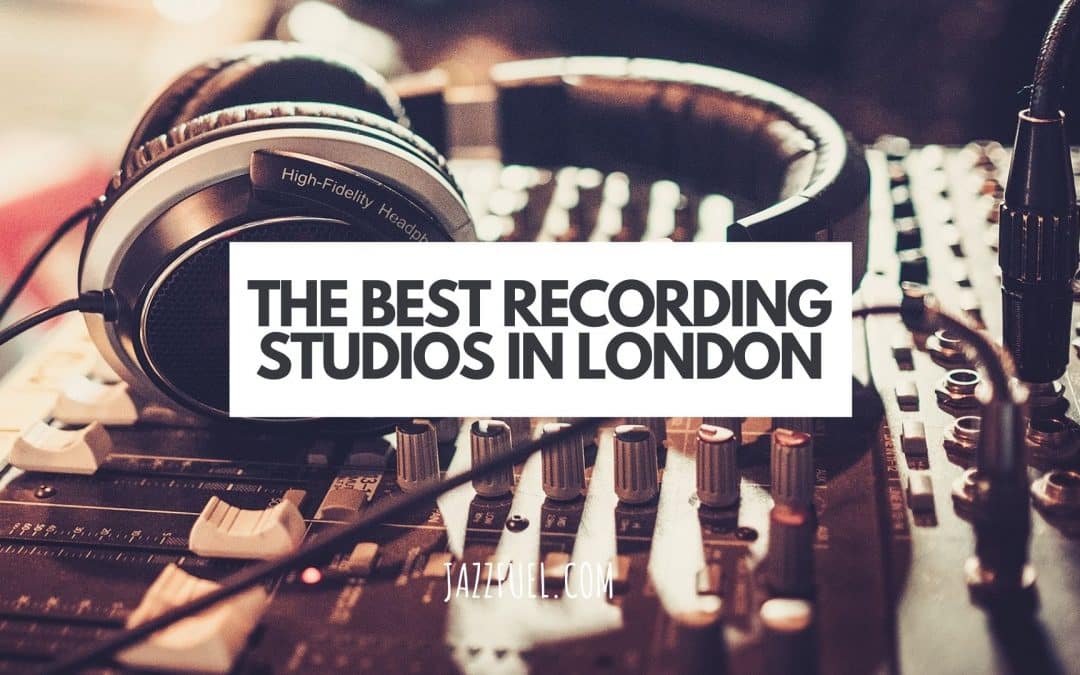 Join us as we take a look at some of the best recording studios in London, including the iconic Abbey Road, a completely solar panelled studio and many more. If you’re a jazz musician looking to record your latest compositions read on for our top picks.

The ten London studios on this list span the entire city and all offer great facilities, knowledgeable studio engineers and fantastic spaces for recording your single, EP or album.

We’ve included some legendary studios on this list as well as lesser-known gems which offer a more affordable service. So, let’s get straight to it.

[On the other side of the pond? Check out our guide to 8 iconic New York recording studios too]

This London recording studio was originally opened in 1986 by two local jazz musicians, Dill Katz and Colin Dudman, as a low-budget alternative to the established (and expensive) London studios of the time.

The studio itself (which also houses its own rehearsal space) is impressive. Its most notable aspect outside of its impressive gear and architecture is the fact that it’s entirely solar-powered.

The studio houses a full, up to date ProTools system (with HDX rig), and a 24-channel SSL console (analogue). The instruments are included free of charge, which includes a Yamaha C3 series acoustic grand (although session tuning is charged for upon request), a Gretsch 5-piece kit, several synths, guitars and bass guitars, and the amps to go with them.

The studio welcomes clients to bring their own studio engineer, or hire from their staff.

Their client list includes the likes of jazz-pop singer Jamie Callum, Ben E. King (of Stand By Me fame), and Amy Winehouse.

Due to its solar power, this studio is best for those who wish to be a little more environmentally friendly. The large space and conservatory is fit for a more relaxed feel, and the analogue/digital hybrid setup is good for someone who wants a vintage sound without the complexities of tape.

The studio has a live room, so it is ideal for bands or solo artists who want an acoustic/live feel. The studio also contains high-quality gear, with everything mentioned, plus the addition of several Neumann mics in an impressive microphone collection.

The first studio, Livingston 1 has three large spaces and a large control room with a 72 channel SSL SL4072 G+ series console. Thanks to its ample space, it’s a great choice for larger ensembles and big bands.

Two of the rooms are divided by glass walls with doors that allow for the space to be opened up.

The recently refurbished Livingston 2 also has three live spaces, a control room (featuring a Custom Series 75 console) and an additional space that is often used as a bass amp booth or isolation area.

Livingston 1 houses a full up to date ProTools system as well as an Ampex tape recorder. There is also an impressive selection of AKG, Shure, and Neumman microphones.

The instruments include a 1978 Fender Precision Bass, a 1970s Fender Stratocaster, and a Martin D-16GT Acoustic.

This studio is best for artists looking to record live/simultaneously.

It almost goes without saying that Abbey Road is one of the best recording studios in London. It is so legendary that it has become a household name for many. The Beatles and their album named after the studio, along with their famed zebra-crossing walk has made the building not only a famed studio but a tourist attraction.

That said, the studio itself is more than impressive, containing the three legendary spaces of Studio One, Two, and Three.

There is an extensive range of outboard equipment, plugins and vintage and modern instruments to use.

Famed artists that have recorded at the studio (other than the Beatles) include both Shirley Bassey and Aretha Franklin.

Whilst the legendary Studio One, Two, and Three are expansive, acoustically-engineered spaces with a plethora of impressive equipment, the newer additions of the smaller Gatehouse and Front room make the magic of Abbey Road more accessible for upcoming artists with a lower budget. Abbey Road is a flexible studio, with much to offer.

Studio One can also accommodate a large symphony orchestra or chorus, making it ideal for recording big band jazz or film scores.

Resident Studios have been open for over thirteen years, and boast two recording studios (as well as three rehearsal rooms). The studios were established in 2001 when they took over from Stepping Stone Studios, which was a leading studio during the busy Willesden music scene.

Since then, the studios have evolved with the technology, moving from analogue tape to SSL and ProTools.

Studio A sports a vintage solid-state logic (SSL) analogue console, whereas Studio B and C have smaller, humbler desks. The studios host an impressive microphone collection, including a selection of Neumman, Shure, AKG, Audio-Technica, and Rode mics.

The selection is also diverse (as is the case with many of the studios on this list), including dynamic, condenser, and ribbon microphones.

Resident Studios pride themselves on accommodating lower budgets with ‘extremely competitive prices’, so this studio is best for just that: people looking for quality recordings at an affordable price (in comparison to many major London studios, that is).

Perhaps one of the more extravagant studios on this list, Metropolis is a complex of recording, mixing, and mastering suites that is ‘designed around a massive and airy twenty-metre high atrium filled with platforms and walkways’.

This massive complex gives a lot of space and freedom, contrary to the claustrophobic atmosphere of typical studios. The complex also contains a fifty space security car park and nineteen residential apartments. On top of this, the Metropolis has its own ‘outstanding quality’ bar.

While this is not necessary, if your budget is on the higher side, this studio may give you the ambience that you’re looking for.

All four studios sport their own distinct analogue consoles. Whilst recording at the studio you will have access to their engineers and assistants, as well as a microphone/equipment list that the website deems ‘enviable’.

They’re not lying, the list is so extensive that there’s no need to go into it here, just know that the list is extensive, and contains everything necessary for a great recording. There are large selections of all types: dynamic, small and large-diaphragm condensers, valve, ribbon, and even wireless.

This studio is best for those looking for something more expansive. Metropolis is an extravagant complex, with a plethora of options, so it’s likely to accommodate all kinds of artists.

The Drum Shed is a fully equipped studio for recording drum tracks. They boast a large selection of both new and vintage drums.

The Drum Shed uses Logic Pro instead of ProTools, and they have a much smaller amount of microphones than the other studios on this list. However, the studio does benefit from being a speciality studio, as it has a large selection of drum options for building out a kit.

This could also be good for those recording on micro-budgets from their bedrooms, who cannot record drums from home for whatever reason.

This studio has a long history, once known for being used as a film studio during the 1950s. A48 channel SSL console can be found in the control room along with an 8-channel Shadow Hills preamp.

Dean Street is best known for recording the likes of Alfie Boe, Cee Lo Green, and Wolf Alice, among others.

Dean Street Studios is based in the vibrant and exciting Soho district and prides itself on creating a relaxed and friendly environment to help inspire creativity.

Located in North London and founded in 1976, all of RAK’s studios a spacious, and boast plenty of natural light. Unlike most studios, RAK has in-house accommodation for up to six people, including catering facilities and off-street parking for up to 10 vehicles.

This is great if you live far away and don’t want to shell out for travel expenses or an expensive hotel, and it’s also great if you’re bringing a lot of your own equipment, or you have a large band.

Among the studio’s impressive equipment list is a Roland Juno 106, a Roland Jupiter 8, a Wurlitzer, a Fender Rhodes, and a Leslie cab. The studio notably doesn’t include any guitars or basses, but it does feature several amplifiers. The studio also contains several drum kits.

The computers, software, preamps, and microphones are industry standard.

This studio is best for those who are looking for a historic, tried and tested studio, and it’s also the best choice for those in need of accommodation.

Regarded as one of the best recording studios in London, this facility prides itself on its friendly and highly experienced production team. They boast ‘the best sound engineers and producers to assist you with your projects.’

The studio, like the others on this list, has an SSL desk, as well as a plethora of microphones and other equipment. They also provide a long list of instruments, including a Gibson J45, a Fender Telecaster, a Roland Juno 6, a Korg MS-20, and a Yamaha DX7. Their most notable microphone is likely the Neumann U87.

The studio says they ‘don’t believe in a fixed price for everybody’, so the studio is seemingly low-budget friendly. All prospective clients can also visit them for a free consultation, which is a nice option if you’re on the fence about whether to record there or not.

This studio is best suited for those looking for a more personal touch, along with the option for low-budget entry.

The legendary Church Studios relaunched in 2014 after a hiatus following a long history, led by the acclaimed music producer and songwriter Paul Epworth

Their most notable space is Studio 1, as it boasts an expansive floor space, triple-height ceiling, and a vast equipment list. A key feature of the studio is its 72 channel vintage EMI Neve console. According to their website, it is ‘the only one of its kind in London’.

The Neve console is legendary in of itself, so this is certainly a selling point for those looking for a vintage and warm sound.

Church also has a second studio (aptly named Studio 2), but with a modern SSL console instead. This room can record 4-5 piece bands, with a large booth that can accommodate isolated drums. Studio 2 also has a private lounge and communal kitchen.

This studio is versatile, as it offers both a modern and vintage approach with its two broadly different studio spaces. Studio 1 is an expansive, no-bars space that is great for vintage experimentation, whereas Studio 2 might be better suited to those with a more modern, minimalist mindset.

There are countless other studios in London, many of which could have made this list. A few honourable mentions include AIR Studios, Jimi Hendrix-designed Electric Lady Studios and Britannia Row Studios.

When you’re finished in the recording studio, be sure to check out some of the best jazz clubs in London. If you’re a recording artist, head over to our complete guide to releasing new music for more top tips.