How to write an effective music press release 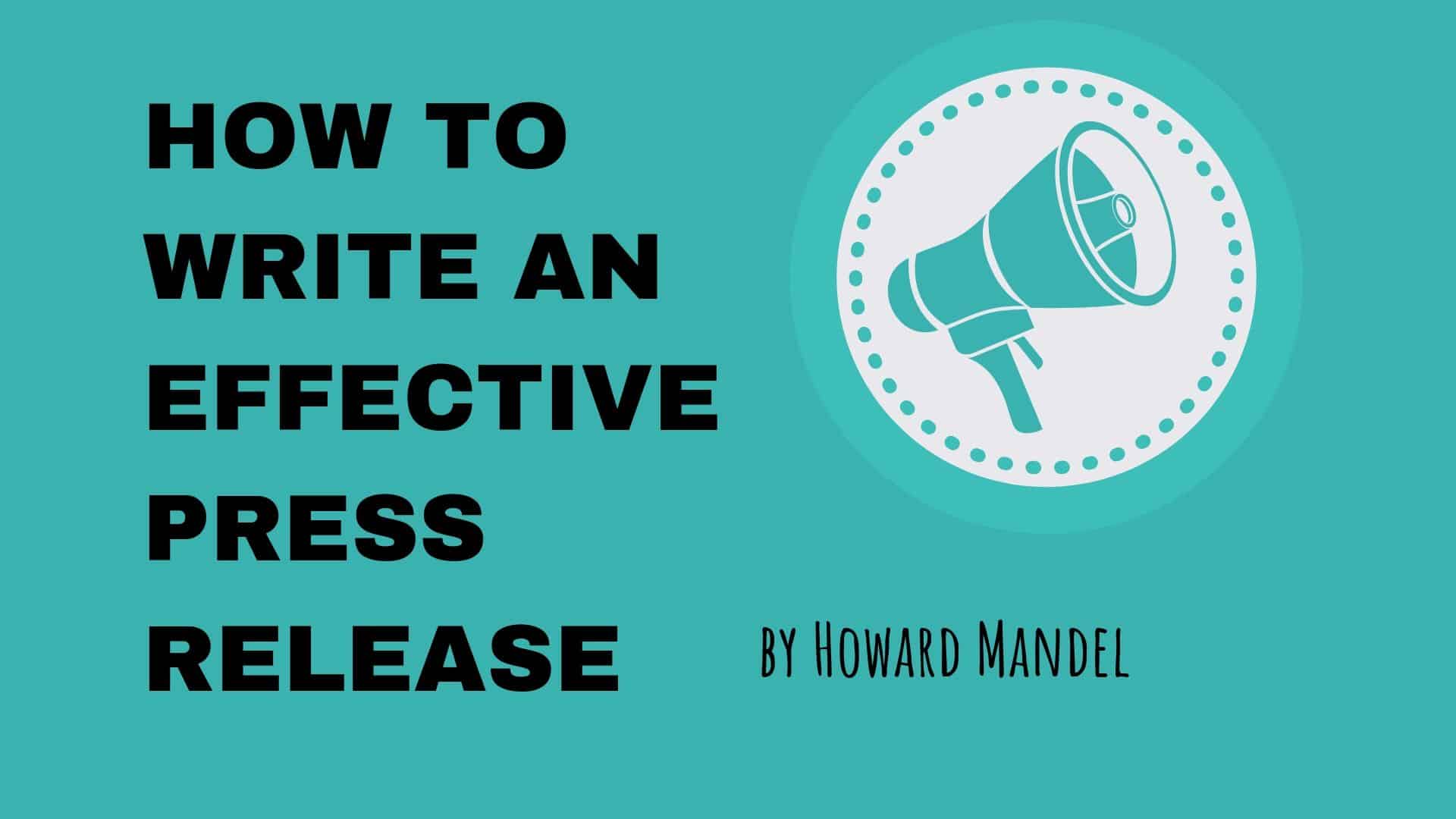 If your goal is to get more gigs and sell more music, recording and releasing great music it is only the start.

Persuading magazines, blogs, websites and other media outlets to spread the news for you is vital in building your profile and one of the best ways to get this going is by writing and sending an effective press release.

To make sure you get the best possible advice on this, I want to introduce you to someone who’s read thousands of press releases and written dozens himself.

Enter Howard Mandel: president of the Jazz Journalists Association, author of two books, consultant editor of the Encyclopedia of Jazz and Blues, and writer at JazzBeyondJazz.

In this article, he dives deep into how to write a great press release so you can stand the best chance of connecting with press, even if you’re running a DIY campaign. Or, to put it another way:

“Don’t worry! Press releases aren’t physics or trigonometry. You can indeed write one yourself.”

What Makes a Press Release Effective?

As British music journalist Matthew Wright observed in his practical post “How To Get Reviewed by a Jazz Journalist,” getting coverage by independent, respected publications whether in print or online is almost always a boost to a musician trying to build a career. The first approach to such publications, or those who write for them, usually involves a press release: a concise text (appropriate image attached) intended to pique interest and supply basic information.

Over years of writing about jazz I’ve read thousands of press releases, and written dozens. Press releases are issued as emails and snail mail, as printed pages accompanying CDs and LPs for review, and may be used on websites, even as home-page posts. My guidelines about them may be most useful for artists who launching DIY publicity campaigns, intending to create or at least contribute to their own press releases.

This article’s prime dictum is: Don’t worry! Press releases aren’t physics or trigonometry. You can indeed write one yourself.

Basic considerations for a press release

The basic consideration when starting to write involves the intended audience for what you’re writing – that is, the readers you want to engage. Press releases ought to be designed to be available, accessible and offered to a multitude of potential end-users, but those end-users are not your greater potential listening audience – which includes friends, relatives and fans who are not involved in the business end of your work.

Rather, the readers you want to influence are editors, writers, broadcasters, webcasters and perhaps agents or bookers at venues. These folks don’t want (and probably won’t read) lengthy, in-depth articles about you and your projects that you yourself or your publicist have painstakingly composed. They’re not looking for literature. They want information, quickly and clearly stated.

You may place at the top of a press release some choice endorsements you’ve received from noted influencers – do that in a format different than the body of your text – but I urge you to lead with facts that can be absorbed at a glance.

The best checklist for information necessary to provide remains that hoary journalism standby, the five Ws: Who, What, Where, When, Why (and sometimes How). Of these, I think “Why” is the most important, the intrinsic lure that persuades someone to make an effort and perhaps enlist others in spreading word of your news.

Yes, news! A press release is by definition about something that just happened or is about to happen (which means it’s not a bio, though it may and most likely should include some biographical information, nor is it an album synopsis, although if it’s an album you’re promoting, you do want some specific info related to it in your text).

Those readers I mentioned above are looking for news of something new, not simply the same old thing – if that were the case, they could just reprint an old story. No, you should project that you’ve got something newsworthy to offer.

So identify what that something is.

If you can’t tell an editor or writer what’s newsworthy – interesting now, not in the receding past or some vague future – you won’t grab their attention. A big, often circular file, aka “trash can,” awaits press releases that don’t convey timely, compelling news.

How do you know what’s news? Well, what are you bursting to say? What do you want the world to know?

A related question is: How do you conceive of that world? Local, regional, national, international, or all of the above? Narrowly focused (say, on jazz per se, immediately upcoming performances and current recordings) or broad (taking in politics, aesthetics, other arts, community issues, spirituality)?

Are you reaching out to local media platforms and press, music (or music business or music education) outlets, independent journalists, slick periodicals, online bloggers, the Twitterverse? If your answer is “everyone,” you’ve posed a bigger than necessary challenge for yourself, not to say you can’t do that.

Although you will and should want this press release to catch the eye of everyone who receives it, I advise some prioritizing is necessary in order to concoct the text, as well as a dispassionate understanding of how your message will play to a professional who is less invested in the subject than you, yourself. Maybe a good way of planning a press release text is to draft a hook, line and sinker.

Is there a local angle in your hook (“There’s a new saxophonist-composer in town, who sounds like nobody else, exciting crowds at Club X, every Xday at X o’clock“)?

Are you promoting a regional tour (“Player X, roaring through the area, brings a new sound and/or concept to this place on this date at this time“)?

Are you announcing a new phase of activities, collaboration, life-style change related to your work (as a theme, this works best if you’re already established for the reader as something else)?

Do you have a new album – if so, what’s it about, why should readers care (“The Way of All Flesh, X’s musical answer to the question of the meaning of life, is coming out WHEN, available WHERE“)?

Notice that each example includes who (“X”), what (new in town and drawing crowds, new concept, album on meaning of life), where (in town at Club X, to this place, available at this site), when (date and time) and why.

The why may not be as obvious as these other elements or may require assertions that seem self-serving (“sounds like nobody else . . . exciting crowds,” “roaring . . new sound and/or concept,” “answer to all your questions“). But the more specific and convincing those assertions are, the more likely you’ll get consideration of coverage.

Some assertions will naturally get widespread attention (for instance, “Jazz Musician X has won the Nobel Peace Prize, as announced today by the Swedish academy…“)

Some such endorsements like Grammy nominations, contract signings, professional appointments will be of interest primarily to business or fan-based publications and the scribes who labor for them.

Some “news,” like “Musician X has moved out of town” may be for family newsletter or other vehicles than a press release.

But now I’m getting in the weeds. You have something to say – say it! Organize your news around the five Ws succinctly. In ye olden days of daily newspapers, a reporter got it all in 25 words or less. Think of your hook as a Tweet.

How long should a press release be?

Put the most catchy of the Ws (usually What) most prominent in the first sentence of your first paragraph, followed by your next important fact (probably Who) and secondary details (When, Where –be accurate and exact!) although if you’re playing the White House, pyramids or an esteemed venue on a special occasion, get the glamor up front, then get to Who (you?).

Add another dimension, a little bit more description – to the main element of your hook. Refer only to aspects of your background and history that connect directly to or amplify what you’ve said before. Keep it short but cite interesting complications. Don’t write the story for the journalist – make the journalist want to learn more, call or e-mail and write from that interaction.

A press release, imho, should seldom be more than two printed pages (like, front and back), perhaps 800 to 1000 words. Writing more as a press release per se amounts to being in love with your own voice or wasting trees.

Reinforce one more time your hook. Lean on Why, remind the reader of What – then turn to How. How does one learn more about the What? Where and When does one click on/call/buy tickets/see a website/watch a Youtube clip. You don’t need more than a paragraph for this.

Make it easy for the reader. A press release is a request they promote you or your project, yes, but also an invitation to have some contact, perhaps start a relationship. If they’re open to your project once, you’ll ask them to cover it again, right?

A press release is only the beginning.