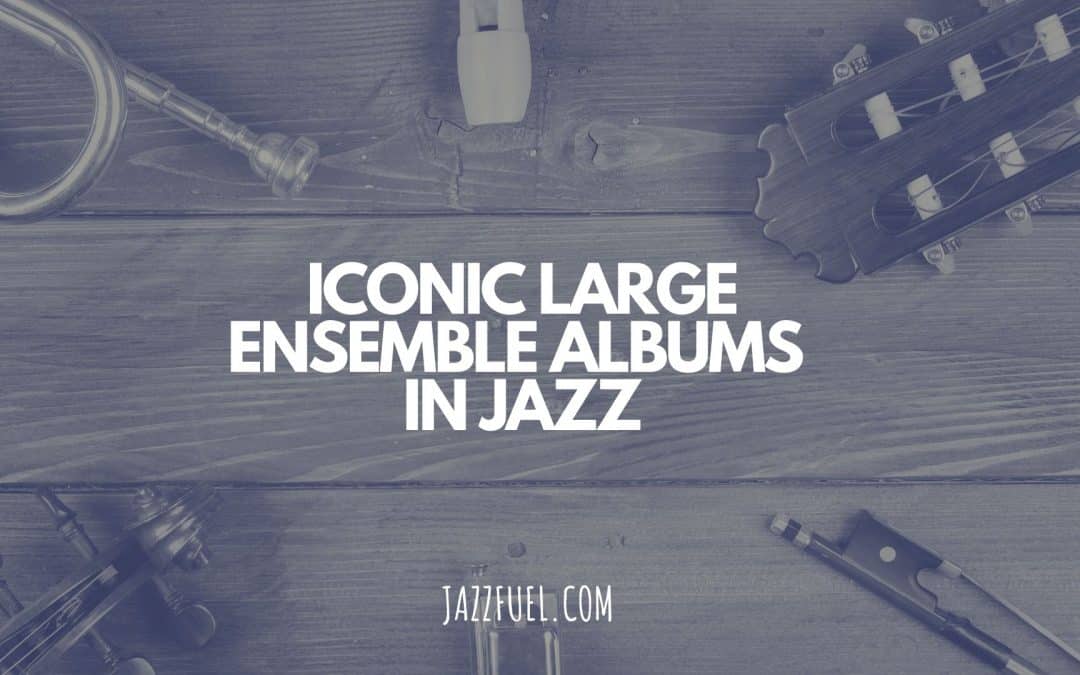 Many of the greatest jazz albums of all time are made up of what we’d call small groups; trios, quartets and quintets. There are, of course, a handful of big bands (think Duke Ellington & Count Basie) which also feature.

In this article, though, we jump into the topic of ‘large ensembles’ – those groups which seem to fall somewhere in the middle and, as such, bring together fascinating and sometimes unexpected groups of instruments to achieve their distinctive sound.

Many interesting large ensembles have been created with sizes between the small group and big band.

Some might actually be an expansion of a smaller group project, or a scaled-down version of a big band one – perhaps for economic reasons or so as not to overpower a soloist. Others, though, are created out of nothing with this exact line up in mind.

Whatever the reason, the large ensemble has provided us with some of the most interesting recordings in jazz history and, in this article, we’ve picked out 10 essential recordings in this format.

‘Birth Of The Cool’ was the title given to a series of recordings by trumpeter Miles Davis, released together on a 12-inch LP record in 1957. The sessions were in 1949 and 1950 and the tracks had been issued soon afterwards as singles and 78 discs.

For this project, Miles was part of a nine-piece ensemble which used tuba and French horn. Gil Evans’ arrangements featured rich harmonisation of the melody and counter-lines.

The tempos were slower than in bebop, presenting a new style of jazz which suited Miles’ strengths as a player.

‘Birth Of The Cool’ was the first of many collaborations with Gil Evans and included several players who became associated with the term cool jazz: saxophonists Gerry Mulligan and Lee Konitz and pianist John Lewis, founder of the Modern Jazz Quartet. Drummer Max Roach also played on the sessions.

The album’s impact and influence has grown over time and some of the ensembles mentioned below are modelled on the ‘Birth Of The Cool’ nonet.

Although he frequently performed with a smaller line-ups, Charles Mingus sometimes recorded with eight or more players to bring his ambitious compositions to life.

Mingus always featured some very distinctive soloists and he preferred to teach the music to his players. This was the early approach of Duke Ellington, one of his key influences and his employer for a brief period.

Recorded in May 1960, ‘Mingus Dynasty’ is an excellent example of the composer’s joyful and unpredictable sound.

The blues is the foundation for some numbers, like the 12/8 gospel-influenced ‘Slop’ and ‘Gunslinging Bird’, a tribute to Charlie Parker which sounds like a runaway train.

The CD features a bonus track, ‘Strollin’ which is a vocal version of the Mingus standard ‘Nostalgia In Times Square’, sung by Honi Gordon with a tenor saxophone solo by Booker Ervin.

The composer and pianist Carla Bley is something of a large ensemble specialist.

Like the great Duke Ellington, she has collected her favourite soloists to feature in her band. These include the trumpeter Lew Soloff, trombonist Gary Valente, tuba player Bob Stewart and her partner, the bass guitarist Steve Swallow.

‘Fleur Carnivore’ was recorded live at Copenhagen’s Montmartre club with a 15-piece ensemble. It is an excellent introduction to Bley’s distinctive compositions.

Highlights include Gary Valente’s emphatic solo on the hypnotic ‘Song Of The Eternal Waiting Of Canute’, the clever call and response on ‘Ups And Downs’ and the rockish ‘Healing Power’.

With drummer Buddy Williams and percussionist Don Alias in the band, there’s a groovy jazz-fusion polish to the music.

Bley’s tunes are great vehicles for the soloists, who include saxophonists Wolfgang Puschnig and Andy Sheppard.

This also features a 15-piece group, with arrangements by Brecker and Gil Goldstein. Brecker’s large ensemble tour of the UK in 2002 laid the foundations for the recording.

The compositions are mostly Brecker’s and include the gentle bop head ‘Cool Day In Hell’, the ballad ‘Angle Of Repose’ and the African-style ‘Timbuktu’. ‘Night Jessamine’ is a breezy funk number in the style of the Brecker Brothers.

Michael Brecker is at the top of his game here and it really is a saxophone tour de force.

This album is one of the classics of West Coast jazz, a style which evolved in the 1950s in Los Angeles and San Francisco. It features the crisp alto saxophone of Art Pepper and a tight-sounding ‘mini’ big band with arrangements by Marty Paich.

The material includes some of the compositions associated with this scene, including ‘Bernie’s Tune’ and ‘Four Brothers’, often with a strong counter-line in the arrangement. The inclusion of ‘Move’ is another nod to the ‘Birth Of The Cool’.

If the band sounds familiar it’s because Paich and others wrote for a few ensembles using many of the same personnel. These include Shorty Rogers and His Giants, the Dave Pell Octet and on the album ‘Mel Tormé and the Marty Paich Dek-Tette’.

David Murray emerged as a leading light on the New York jazz scene in the late 1970s.

A virtuoso on tenor saxophone and bass clarinet, his main influences are John Coltrane and Albert Ayler. Murray’s music is rooted in the blues and incorporates free improvisation.

‘Home’ is the second recording of his octet group, made up of some of the more experimental players on the scene, including saxophonist Henry Threadgill, trombonist George Lewis and pianist Anthony Davis.

Like Mingus, Murray succeeds in bringing an unusual group of soloists together and sparks fly when they improvise.

The title track, a ballad in the spirit of Ellington, is a feature for Threadgill on flute. Other highlights include the infectious ‘Last Of The Hipmen’ and the rousing ‘Choctaw Blues’.

The Swiss trumpeter and flugelhorn player Franco Ambrosetti assembled a 10-piece ensemble in New York to record this album in 1985.

Michael Brecker and Steve Coleman are two very different saxophonists and this is an opportunity to hear them soloing on the same record.

The tracks include a notable cover of Wayne Shorter’s ‘Yes Or No’, Ambrosetti’s latin original ‘Rio Moreno, Allegro Con Brio’ and George Gruntz’s beautiful ballad ‘Ode to a Princess’.

In such talented company, Ambrosetti rises to the occasion and this is a very satisfying album overall.

The great jazz pianist and keyboardist Herbie Hancock experimented with large ensembles in the late 1960s and early 1970s. His Mwandishi band was a sextet and he sometimes recorded with larger groups.

‘Fat Albert Rotunda’ was composed for a TV show but it is now rightly seen as a classic. It contains the funky opener ‘Wiggle Waggle’ and the hauntingly beautiful ‘Tell Me A Bedtime Story’.

Five tracks were cut with a sextet featuring Joe Henderson on sax and flute, Buster Williams on double bass and Albert ‘Tootie’ Heath on drums.

A further two tracks were recorded with 10 players including Joe Farrell on tenor, anchored by Jerry Jemmott on bass guitar and Bernard Purdie on drums.

British drummer Bill Bruford is a founder member of the progressive rock band Yes and he has many jazz-related side projects to his name.

As the 20th anniversary of Earthworks approached, Bruford and Garland planned a series of concerts in New York using some of the city’s first-call players. If the results are anything to go by, they had an absolute blast.

It’s great to hear these players solo on such challenging material as the serpentine ‘Pigalle’ and ‘Footloose And Fancy Free’, both of which have odd time signatures.

Bruford has an individual sound on the drum kit and Garland proves an exciting soloist. He also arranged the music.

The Tokyo-born composer and arranger Miho Hazama founded her 13-piece ensemble, m_unit, while studying at Manhattan School of Music.

Hazama surprises the listener with her writing and the solos can come from any player in her band, which includes strings, woodwinds, brass and vibes.

Guitarist Lionel Loueke and vocalist Kavita Shah are among the guests, bringing even more sounds to the mix.

The album was nominated for Best Large Ensemble Album at the 62nd Grammy Awards in 2020.

Many of the artists listed have made other large ensemble recordings, so explore these and look out for other recordings featuring unusual instrumentation.

You can find many of the musicians referenced here on our list of best albums of all time, or head over to our Jazz Music homepage for more.