10 of the Best John Coltrane Albums in Jazz History 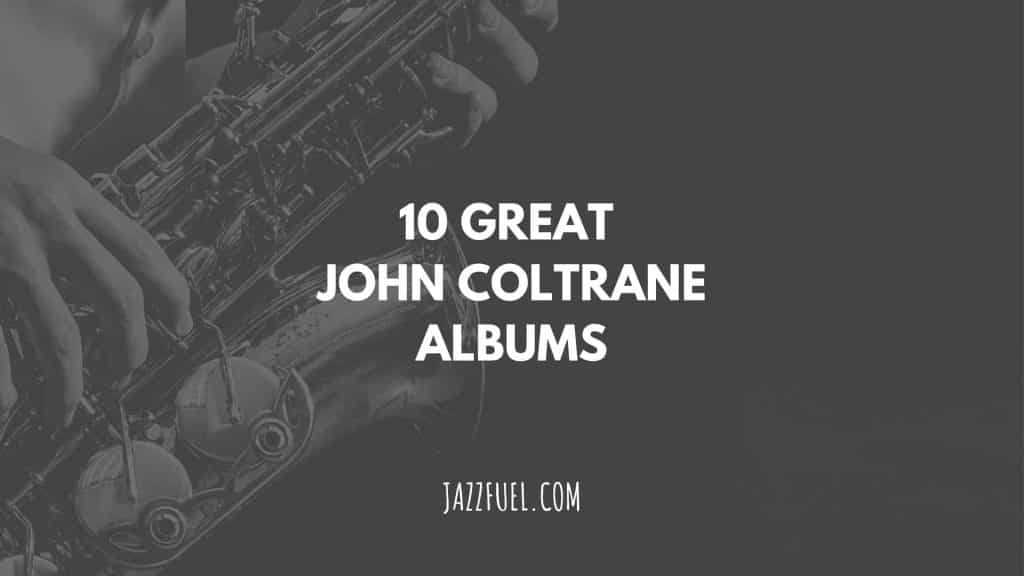 American saxophone player John Coltrane is surely one of the most inspiring figures in all of jazz history and, in this article, we’ll take a chronological look at 10 of the best albums from his discography.

The tenor and soprano saxophonist practised constantly and was relentless in his efforts to develop his music and push forwards artistically.

Coltrane’s recorded output features some of the most important jazz albums of all time and underwent several major stylistic shifts, from the hard bop of his early career, to the intensely spiritual free jazz of his final years, via his important role in the modal jazz revolution and his own ‘Coltrane matrix’ phase.

So, in chronological order, here are 10 of the best John Coltrane albums that tell the story of his life and career. 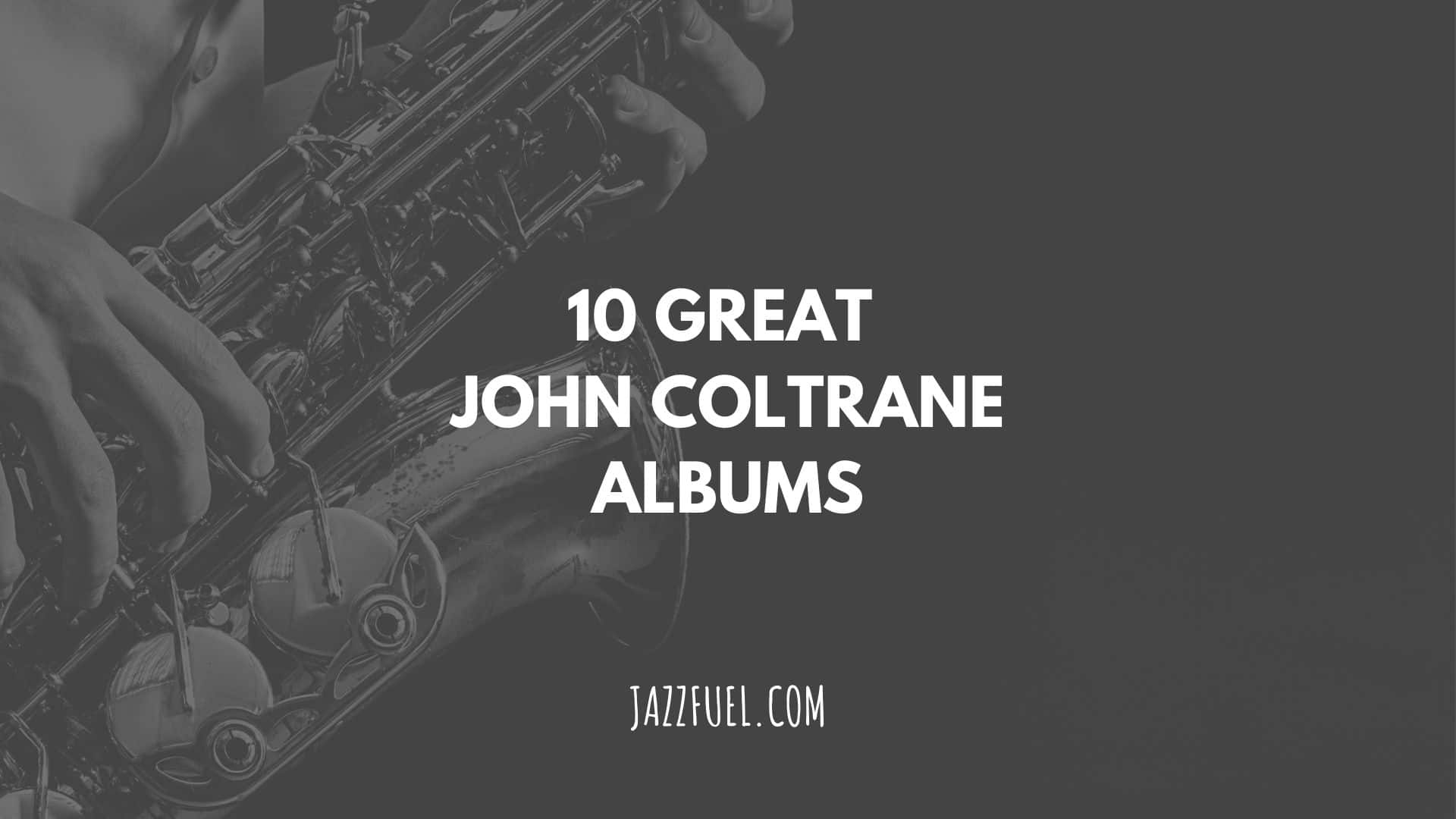 John Coltrane was born in Hamlet, North Carolina, in 1926, but moved to Philadelphia as a teenager.

After a stint as an alto saxophonist in a U.S. Navy band during the Second World War, he began to work as a professional musician. After switching to the tenor saxophone in 1947, he played in big bands led by Dizzy Gillespie, Johnny Hodges and Earl Bostic in the early 1950s.

Seeing Charlie Parker play live in 1945 had been a key early inspiration, and at this point he was already known for his endless practice sessions, which would often finish with him falling asleep with the horn still in his hands.

His first major break came in 1955, when he got the call to join what would ultimately become known as Miles Davis’ ‘First Great Quintet’, which would record the classic Relaxin’, Cookin’, Steamin’ and Relaxin’ series the following year.

In 1957, aged 30, he recorded Coltrane (sometimes issued as The First Trane!), his debut record as a bandleader.

That same year he recorded Blue Train, which would be his only album for Blue Note Records. Featuring a teenage Lee Morgan on trumpet, it is regarded as both a classic of the hard bop genre, and one of the finest examples of John Coltrane’s early period.

The original compositions ‘Lazybird’ and ‘Moment’s Notice’ anticipate the challenging harmonic territory that he would explore further during the next few years.

John Coltrane was deeply involved in the modal jazz revolution that took place in the late 1950s, playing on Miles Davis’ seminal Milestones and Kind of Blue albums, which both included tunes that moved away from traditional chord functions towards a more static harmonic landscape.

But alongside that, the saxophonist was plotting his own contrasting harmonic upheaval.

A number of his compositions began to use ‘Coltrane changes’, harmonic sequences that are based on key centres moving quickly in thirds. This rapid movement between barely related tonalities makes them extremely challenging to improvise over coherently.

The title track of Giant Steps, Coltrane’s 1959 debut for Atlantic Records, is the most famous example of this. It remains a tune that’s studied by jazz musicians around the world and was featured in this guide to 10 essential jazz standards.

‘Countdown’, meanwhile, applies the ‘Coltrane Matrix’ to the chord sequence of the jazz standard ‘Tune Up’.

The ballad ‘Naima’, reportedly Coltrane’s favourite of his own compositions, is a tender dedication to his first wife.

Recorded over multiple sessions in 1959 and 1960, Coltrane Jazz is an interesting transitional record.

Tracks like ‘Little Old Lady’ and ‘My Shining Hour’ are great examples of Trane at his most straight-ahead, with the saxophonist accompanied by pianist Wynton Kelly, Paul Chambers on bass and Jimmy Cobb on drums, who at the time formed the rhythm section for the Miles Davis Quintet.

One element of John Coltrane’s saxophone playing that is arguably sometimes overlooked is just how fabulously swinging it is, and he’s really steaming here.

We also get a glimpse of his future direction, as the track ‘Village Blues’ has an altogether looser rhythm section, with McCoy Tyner on piano, Steve Davis and Elvin Jones.

‘Fifth House’ juxtaposes a static vamp with a faster-moving ‘Coltrane Matrix’ section, while ‘Like Sonny’ is a dedication to his tenor colleague Sonny Rollins.

In 1958 jazz critic Ira Gitler coined the metaphor “sheets of sound” to describe Coltrane’s dense scalic improvisational style during this period. His highly distinctive saxophone sound is somewhat metallic; capable of both harshness and tender beauty.

The title track of this 1960 recording features John Coltrane on soprano saxophone, an instrument that Miles Davis had bought for him whilst on tour earlier that year.

Applying a modal jazz approach to the Rodgers and Hammerstein song, Trane and pianist McCoy Tyner solo over a hypnotic three-four vamp. By playing a song from the hit musical The Sound of Music, he was able to reach a more mainstream audience, and this tune would become one of his most requested numbers when performing live.

We also hear his ‘Coltrane changes’ concept applied to the Gershwin standard ‘But Not For Me’.

The saxophonist was in prolific form in 1960: that same year he would cut Coltrane Plays the Blues, Coltrane’s Sound and The Avant Garde, all of which are fantastic.

This compilation boxset brings together all of the live tracks that Trane recorded at New York’s famous Village Vanguard jazz club in 1961.

The involvement of Eric Dolphy on alto saxophone and bass clarinet was controversial at the time, with some critics slating the more Avant garde direction in which the music was heading.

‘Impressions’, which shares a chord sequence with Miles Davis’ ‘So What, is a modal jazz classic.

The 15-minute rendition of ‘Chasin’ The Trane’ contains another famous solo, as does ‘Softly as In A Morning Sunrise’ which, like ‘My Favourite Things’ is a burning modal makeover of a Songbook standard.

In 1962 Coltrane settled on what came to be considered his ‘classic’ quartet, with McCoy Tyner on piano, Elvin Jones drums and Jimmy Garrison on bass. With Tyner’s crashing, fourths-based chords and Jones’ wild, polyrhythmic drumming, the band is generally associated with burning modal jazz.

But on Ballads the quartet demonstrated its tender side with a gorgeous programme of Songbook torch songs, including ‘Nancy (with the Laughing Face)’ and ‘It’s Easy To Remember’.

The band had apparently never played any of the songs before and arrived at the session with copies of the sheet music purchased from a local music store, before discussing exactly how they would approach each number.

Every tune except for ‘All or Nothing at All’ was recorded in one take.

In 1962 John Coltrane co-led a session with Duke Ellington, the great composer and pianist who had first come to fame as a bandleader during the big band era, decades before the saxophonist’s emergence.

The pair are accompanied by two contrasting bass and drum teams: Jimmy Garrison and Elvin Jones, from Coltrane’s regular quartet, and Aaron Bell and Sam Woodyard, who formed the rhythm section of the Ellington Orchestra at the time.

On paper, the Coltrane-Ellington combination might seem like a strange one, but this is a wonderful album, and arguably a highlight of both musicians’ extremely impressive discographies. Ellington’s groovy ‘Angelica’ is particularly enjoyable.

The ever-modest Coltrane said of the session:

“I was really honored to have the opportunity of working with Duke. It was a wonderful experience. He has set standards I haven’t caught up with yet. I would have liked to have worked over all those numbers again, but then I guess the performances wouldn’t have had the same spontaneity. And they mightn’t have been any better!”

Widely regarded as Coltrane’s masterpiece and one of the greatest jazz albums of all time, A Love Supreme was recorded in 1964 and takes the form of a four-part suite: ‘Acknowledgement’, ‘Resolution’, ‘Pursuance’ and ‘Psalm’.

As suggested by the track titles, the saxophonist was heading in an increasingly spiritual direction that would characterise much of his later work, and the music can be interpreted as an expression of gratitude to a higher power.

Coltrane himself chants verbally on the opening track, hypnotically repeating the words that make up the album title.

The saxophonist was highly influential in using a scale-based approach to improvisation, and this classic example of ‘60s modal jazz sees Coltrane wringing every melodic possibility out of each chord.

Coltrane was fascinated by Ornette Coleman’s developments in free jazz that shook the scene in the late 1950s and early ‘60s.

From 1965, the year Ascension was recorded, his own music was often entirely improvised, dispensing with chord sequences and organised tempos.

This watershed album utilises an 11-piece band, signalling a move away from his classic quintet format. The music alternates between more structured ensemble passages and solo sections that are essentially free, with soloists given skeletal harmonic information, plus the instruction to finish with a crescendo.

The roaring dissonance heard here and on subsequent albums continues to divide fans.

The two were married in 1966 and had three sons together. Originally a bebop pianist, she would become better known as a harpist and purveyor of cosmic free jazz. She recorded extensively with her husband in his final years, and together the pair developed a deep interest in spirituality and religion.

John’s final recording is an intense, ruminative affair that is largely freely improvised.

Made in 1967, it features Alice Coltrane, Pharoah Sanders, Jimmy Garrison and Rashied Ali, with whom he recorded the sax-drums duo set Interstellar Space, another classic effort from his late period.

Coltrane died from liver cancer that same year. He is remembered as one of the greatest and most important musicians of the 20th Century, for his incredible artistry, his humble demeanour and his endless dedication to developing as a musician and human being, not to mention his unforgettable contributions to dozens of classic albums as both bandleader and sideman.

Thanks for reading and hope you found some more listening inspiration in this article!

If you’re looking for more saxophone-related information, check out all the articles on this topic here.

And, of course, you can find John Coltrane amongst many others in our round up of the best jazz saxophone players in history and the best jazz albums ever.

Whilst his Lush Life album didn’t make the cut due to it’s spread out recording sessions, we included a deep dive on this great compilation of songs here.