Jazz Drum Kit Setups – What Gear Did The Greats Play? 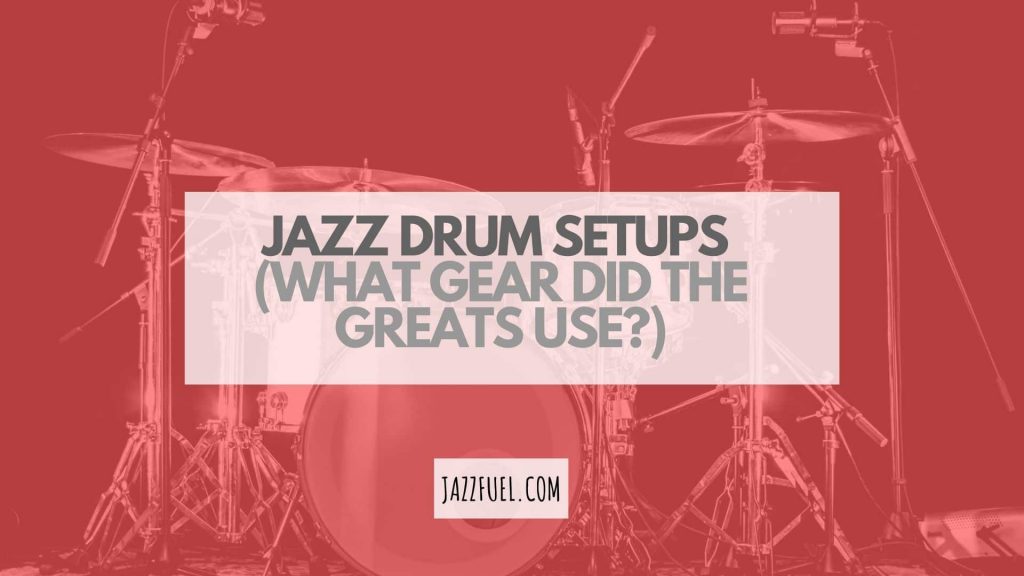 As jazz drummers, we draw inspiration from the sounds created by our heroes. Of course, that can mean learning their best solos and licks, but we can discover a lot about how they made that sound by analysing the setup of their drum kits, too.

In this article we’ve highlighted 10 great jazz drummers covering around 100 years of music and looked at the types of gear they used to make their music.

The drum kit is used everywhere in modern music.

But what we imagine today as an orthodox jazz drum setup is younger than you might think.

It was the result of a few decades-worth of experimentation at the beginning of the twentieth century and consolidated by jazz musicians in the early ’40s.

In fact, the drum kit isn’t really an instrument, but a collection of instruments brought together to meet the requirements of the music being played.

The ten drum kit set ups discussed in this article are examples which we feel are most typical of the artist and are aimed at encompassing as many styles, approaches and eras as possible.

A short history of the drum kit

The evolution of the drums is inextricably linked to the musical style in vogue at any one time.

In the 1920s, drummers in theatre pits had an array of percussion instruments on a contraption tray. These ‘traps’ would be used to accompany the production or silent film.

This dual role of drummer (time-keeper) and percussionist (musical colourist) continued into the 1930s.

By the end of the 1940s big bands were out, and the music of the smaller combos which followed had more need of one than the other.

By the ’60s, drummers were looking to expand their sound palette beyond the standard jazz set up, and began incorporating more and different types of drums and cymbals, as well as percussion instruments.

The result is that we have gone full circle back to time-keeper and colourist.

Jazz drummers today are as likely expected to include a shaker in their bag of tricks as they are to keep the saxophone section from dragging.

Jazz drummers, like other members of the human race, come in different shapes and sizes.

One drummer’s chair height or hi-hat pedal placement may not be comfortable for another. A third might prefer two bass drums while a fourth finds this excessive.

Everyone has their own preferences of brand, model, sizes, number of drums and cymbals, placement of parts, percussion knick-knacks, etc.

And everyone changes these preferences over the course of their career.

With all that in mind, here are 10 jazz drumming greats and their choice of setups…

A pioneer of drum kit playing, Baby Dodds started his career not long after Ludwig Drum Co. patented the modern bass drum in 1909.

This technological innovation allowed for the jobs of two drummers to be accomplished by one and is regarded as the birth of the instrument.

Early jazz had stylistic elements of New Orleans brass bands, reflected in the drummers’ playing by using the snare and bass drums as the nucleus of the instrument.

He had woodblocks and cowbells attached to the top which, together with the wooden hoop of the drum, he would use to vary the timbre of his time-keeping.

His snare drum employed a dual-tension system which enabled him to tune each head separately, allowing him more control over the sound than if he had a single tension drum – this was relatively new technology in the ’20s.

It also had calfskin heads and gut snares, giving a warm sound and less sympathetic resonance than a modern set up.

Baby Dodds’ playing focused on drums rather than cymbals: he never embraced the hi-hat, and used the two small cymbals attached to his bass drum for punctuation and effects.

Duke Ellington and Sonny Greer had a long and fruitful relationship which has given us many important jazz recordings.

Part of this was down to Greer’s ability to perfectly straddle the line between drummer and percussionist.

This, however, was augmented by timpani, gongs, temple blocks, tuned percussion and tubular bells, making the available colours to Ellington’s arrangements infinite.

Bebop synthesised many elements of earlier jazz styles, getting rid of some and creating others. The drum kit did not escape this shake-down.

What we think of as a jazz drum kit today comes from this period.

There are no longer any curios, and the spotlight in the music has shifted from the drums to the cymbals.

Art Blakey occasionally supplemented this with cowbells and shakers for numbers with a Latin tinge, but generally he stuck to the classic jazz drum setup: two ride cymbals, hi-hat bass and snare drums, floor tom and rack tom.

His Gretsch drums were also a modern collection of sizes:

These were complemented by a set of Turkish-made K. Zildjian cymbals.

Stan Levey used the same basic set up as the rest of the bebop drummers, with one exception: he reversed the positions of the parts of the instrument and played as if he was left-handed.

This meant he had the ride cymbal and floor tom on his left, and hi-hat and snare on his right.

Bizarrely, Levey was actually right-handed, but was self-taught and decided not to change later in life.

He completed the kit with a Zildjian 20” ride cymbal and a rather imposing 16” hi-hat.

A drummer has many problems, many of which are not his fault – honest!

He has to keep people in time, not play too loud, be the first to arrive to a gig and the last to leave.

And so, it could be seen as foolish to add to this burden.

Lugging around two bass drums, for the novelty of playing fast on the pedals? Better make that osteopath’s appointment monthly.

Experiments in speed and power by rock drummers in the ’60s and ’70s has made this a more regular occurrence in modern drumming. However, the forerunner was a jazz musician.

Allegedly inspired by tap dancing, Louis Bellson was the first drummer to persuade a drum company (Gretsch) to make him a drum kit with two bass drums.

Although he wouldn’t employ both drums for time-keeping, he would use them to great effect in solos and features, such as Skin Deep with Duke Ellington.

Best known as a jazz fusion drummer with as many drums as chops, Billy Cobham has changed his set up many times.

Early in his career, he played a standard bebop drum kit, albeit in his open-handed style (a technique where the hands never cross over each other). He would even play traditional grip with his right hand as opposed to the usual left.

In footage showing Cobham with Horace Silver in the ’60s, he uses a floor tom which has a pedal attachment. This would tune the drum in the same way the tone of an orchestral timpani could be adjusted.

His experimentation continued into the ’70s when he was part of the ground-breaking Mahavishnu Orchestra. He started to use two bass drums, and a huge number of toms and cymbals.

He would often set up the instrument in a roughly symmetrical fashion, in order to get the most out of his open-handed technique.

As is common with large drum sets, he uses a metal frame to accommodate the toms and some cymbals in order to save floor space.

Tony Oxley’s set up is as unique as his approach to music.

Generally known for his work in the area of free jazz, Oxley had cut his teeth playing orchestral music in a military band.

He went on to be house drummer at Ronnie Scott’s Jazz Club in the ’60s, accompanying all the jazz greats passing through London.

During this period Oxley was moving away from traditional forms of jazz as much as he was playing it and by the end of the decade was even experimenting with altering the sound of drums electronically.

His drum kit extended well beyond the standard jazz set.

As well as core kit, he used an array of differently sized cymbals, bells, woodblocks, Chinese tom-toms, shakers, skulls… the list goes on.

A signature part of this collection was an enormous cowbell, which legend has it was made specially for him.

As was fashionable in the ’70s, Al Foster’s set up is instantly recognisable by near-vertical cymbals looming high over the drums.

Foster sits low behind the kit and has his snare drum high and at a 45° angle.

He is currently playing Yamaha drums and Zildjian cymbals, but has been endorsed by Paiste in the past.

Bill Bruford is best known for his work with rock bands King Crimson and Yes.

However, in the mid-eighties he formed the jazz group Earthworks, reforming with differing line-ups in the late-nineties through the noughties.

Bruford was an early adopter of electronic drums which were designed and manufactured by a company called Simmons.

At the time, the limitless sonic range available from this new technology seemed like it would dominate the field in much the same way keyboards had for pianists.

However, their complexity meant large price tags, and it was rare that music was made which could be said to be exclusively playable on electronic drums.

That said, Bill Bruford’s experimentation in this sphere led to a distinctive sound in Earthworks.

We finish this article with a profound illustration of how far the drum kit has come from its humble beginnings.

The drum kit Jeff Ballard uses in his trio album Time’s Tales with Lionel Loueke and Miguel Zenon comprises pieces from around the world.

He has drums and percussion from North Africa, South Africa, India, Pakistan, China and Europe and bells from Tibet.

The only conventional parts of the set up are a snare drum made in America and cymbals made in Turkey.

This collection is intended to complement the multicultural nature of the music the group plays.

A nuanced and sophisticated combination of drummer and percussionist roles, Ballard’s set up shows us that it is possible to function as a modern drummer but integrate a spectrum of timbres from numerous traditions.

Thanks for reading!  Hopefully this provided some ideas and inspiration for how you might tweak your own drum setup for jazz!

If you’re looking for more specifics, you can head over to our Jazz Drums homepage to find reviews on some of the best jazz cymbals and drum kits.