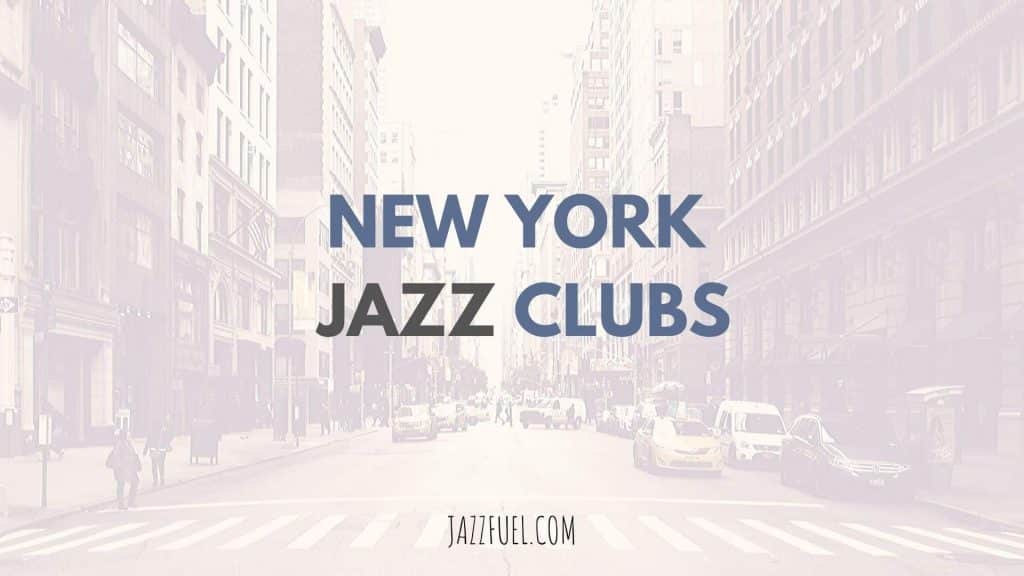 In many ways, NYC is the centre of the jazz world.

And, as such, New York jazz clubs, bars & venues provide a place where jazz fans and musicians alike can hear some of the best music of the day. From living legends to the stars of tomorrow – and everything in between – this city has it all!

So whether you’re a musician preparing to make the pilgrimage to the capital of jazz, or a fan looking to check out some killer music, we’ve put together this list of some of the best venues in New York City as part of our collection of jazz clubs and festivals around the world.

It’s not a usual ‘best of’ list though: we’ve asked a bunch of New York-based musicians from the Jazzfuel community for their help in deciding which clubs should be here – as well as getting extra input on the style of each venue as quotes. Big thanks to those people, some of whom you’ll find quoted in this article with their top tips.

I know it’s a bit of a cliché to ask for comments in the comments section, but we really mean it: where did you go and what did you see last time you were in New York? What other venues should we add to this list and why?

The original version of this legendary New York jazz club opened in 1949 and the great Charlie Parker was the headliner – which may explain where the inspiration for the club’s name comes from.

The 2nd iteration of Birdland opened in 1986 on the Upper West Side before relocating to it’s current premises in Midtown, where it continues to welcome the modern day jazz greats – as well as jazz fans and musicians from around the world who make the pilgrimage to this piece of jazz history.

Established in New York’s Greenwich Village in 1981, the Blue Note is possibly one of the biggest and most legendary ‘brands’ in jazz.

Many of the biggest names in American jazz have performed at the club – Chick Corea, McCoy Tyner, Joe Lovano and John Scofield to name just a few – and, like it’s counterpart Ronnie Scott’s in London, it often welcomes celebrity musicians as on-stage guests and patrons.

Alongside these artists, though, it provides a platform for some of the many killer up-and-coming musicians on the New York scene.

An intimate jazz club in the heart of New York City institution The Lincoln Center, Dizzy’s runs its popular late show alongside the traditional sets.

Trumpeter, composer & educator Wynton Marsalis is the artistic director of Jazz at the Lincoln Center and, as such, the club welcomes some of the best rising stars from the world of jazz – as well as some of the modern-day greats.

Jazz singer legend Tony Bennett hailed Dizzy’s as “the best jazz room in the city” – something which is on display 7 days a week.

Sadly closed in 2020 due to the pandemic, Jazz Standard was one of the most famous jazz clubs in NYC, and remains in this list as testament to the modern day jazz greats it welcomed onto its stage, but also in the hope a new iteration will arrive soon.

Maria Schneider, The Mingus Big Band, André Previn, Nancy King & Fred Hersch are just some of the names to have released live albums recorded at the club.

In fact, we did an interview with guitarist Kurt Rosenwinkel who talked about it: “Having a weekly gig at Smalls in New York every Tuesday in the 90’s with my own band really helped me develop to the point where international presenters and industry people became aware of me.

The word spread about our night and we started getting offers for jazz festivals in Europe and when the lines were always down the block and around the corner, thats when I started getting interest from the labels and eventually got signed…”

Aside from the live shows, this New York jazz club has built up an incredible archive of more than 16,000 recorded gigs, meaning you can watch many of the great shows there online.

Located in Tarrytown, just a short train ride away from the Grand Central station, this New York jazz club describes themselves as a community held together by the artistry of jazz musicians and their patrons’ love of live music.

Recently celebrating it’s 5th birthday, it was opened in 2017 with a performance by the legendary Roy Hargrove Quintet.

In addition, at the Jazz Forum, there is a rotating exhibit of local and regional artists in the club space, available for sale. Proceeds go to the artists and Jazz Forum Arts, the not-for-profit organisation that runs the club.

“This is one of the greatest jazz clubs in the world. Everywhere your eye lights is something beautiful to look at. And the food is terrific.”
– Bill Charlap, Grammy award-winning pianist

Another Greenwich village gem, the 55 bar has been open for more than 100 years (!!) and describes itself as “a prohibition era dive bar with incredible live Jazz, Funk & Blues nightly”.

Don’t let the ‘prohibition’ tagline fool you into thinking of retro jazz and swing… in recent years this underground club has hosted some of the most innovative names in modern jazz in a super intimate space.

“In my opinion the best jazz venue in NYC is the 55 Bar. It’s held longtime residencies for the likes of Mike Stern, Wayne Krantz, and Sweet Georgia Brown.. This lovable dive has music every night of the year week which spans jazz, blues, and the more avant-garde varieties as well…” – American guitarist B.D. Lenz

Of course, there’s a stage 1 and stage 2 at this venue, but we wanted to focus on Rockwood Music Hall stage 3, which is an intimate, underground jazz club-style venue.

Based on the Lower East Side of Manhattan since 2005, it’s provided an early opportunity for many rising stars in all different genres, including jazz, to perform in New York City.

Approximate capacity: 64
Check it out via rockwoodmusichall.com

Named after Milton ‘Mezz’ Mezzro – a jazz clarinettist on the 1920’s Chicago jazz scene – this Greenwich Village club is described by the owners as a “jazz venue, a listening room and lounge.” As part of its endorsement from the Steinway Piano Company, it has a full size grand piano, meaning it can feature the jazz piano greats in style.

Approximate capacity: 60
Check it out via mezzrow.com

Opened in 1935 by Max Gordon, The Village Vanguard holds the accolade of being the oldest operating jazz club in New York City. It’s intimate room has hosted the real legends in jazz history, including – to name just a few –  Lester Young, Ben Webster, Gerry Mulligan, Thelonious Monk, Miles Davis & John Coltrane. On top of that, many legendary live albums have been recorded there.

“Go, you will be glad you did! Monday night is big band night – the players are top musicians in New York and the chairs in the Vanguard Jazz Orchestra are handed down over the years” – Gary Brocks, NYC-based jazz singer & trombonist

I don’t know about you, but the chance to play ping pong, pool and shuffle (I had to have that one explained too) until 4am, whilst listening to some of the killer New York jazz musicians jam, sounds like a pretty good night out.

That’s exactly what you can do at the West Village hangout Cellar Dog.

Most evenings there are 2 sets from 2 different bands (usually around 6/7pm and 9pm) from local New York-based jazz musicians followed by a marathon jam session.

If the name is new to you, that’s because this venue was known as Fat Cat until July 2021!

Thanks for checking out this guide to some of the great jazz clubs that New York City has to offer.

We’ll be updating it regularly, so please feel free to share your own tips in the comments section here…

Musician looking to get a new album together? Check out our pick of 8 of the best NYC recording studios.