Michael Brecker – The Career of a Jazz Saxophone Great 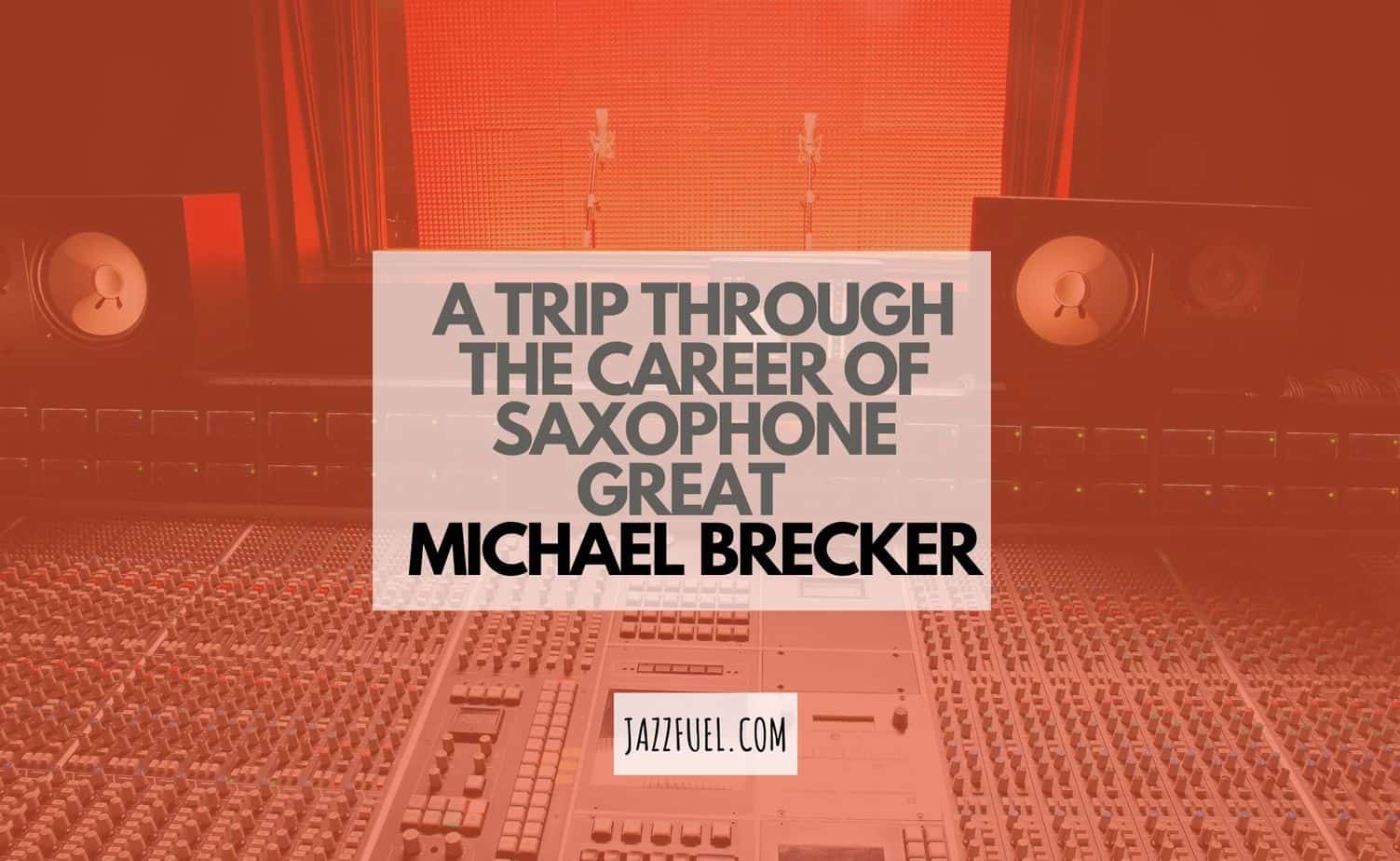 Michael Brecker was perhaps the most influential tenor saxophonist to appear on the scene after 1960s greats like John Coltrane, Wayne Shorter and Joe Henderson. In this article we take a trip through the making of the musician and his career highlights along the way.

The technical prowess of Michael Brecker as a saxophone player is legendary, and he was able to play incredibly complex material with a Zen-like precision.

Chris Potter, a world-renowned saxophonist himself, said of the first time he heard Brecker play “I just couldn’t believe it. I just remember thinking: man, this is as far as you could ever go on the saxophone”.

An astonishingly versatile musician, his career included work with pioneering jazz-rock and fusion bands, sideman appearances with older jazz masters, extensive session work with some the biggest pop and rock acts in the world, and acclaimed, award-winning albums under his own name.

He was also, by all accounts, a warm, humble and funny man, with an incredible work ethic, who was extremely highly regarded in the jazz community before his untimely death.

So, in chronological order, here are some of the key moments from the life and career of Michael Brecker.

Brecker was born in Philadelphia in 1949. He was exposed to music early on: his father was an amateur jazz pianist who took Michael and his older brother Randy to see greats like Miles Davis, Duke Ellington and Thelonious Monk live.

His sister Emmy played classical piano, while Randy played trumpet and would later go on to have a major jazz and funk career of his own.

Brecker studied clarinet and alto saxophone before switching to the tenor saxophone under the influence of John Coltrane.

He described his supportive family life in an interview: “My father could think of nothing nicer than to have professional jazz musicians in the family… It was the wrong way round. Fathers are supposed to advise you to get a proper job. My teenage rebellion was to consider becoming a doctor.”

Moving to New York and working with jazz-rock band Dreams

After a brief period of study at the University of Indiana, Brecker made the big move to New York City in 1969, as so many jazz musicians have done before and since.

Aged 20 he became a member of the jazz-rock group Dreams, recording Dreams and Imagine My Surprise.

Although the band was short-lived, it helped launch the careers of important musicians like the fusion drummer Billy Cobham, guitarist John Abercrombie, pianist Don Grolnick, as well as Michael and Randy. Legend has it that the band may have influenced Miles Davis during his Jack Johnson period.

“I couldn’t have picked a better time. I was in the first generation to be exposed equally to jazz and pop. We listened to Miles Davis and Sonny Rollins, John Coltrane, rhythm-and-blues, the Beatles, Hendrix. We developed a whole new approach and it gave us so much freedom. The rock context meant that you could play complex ideas and not be met by a bunch of puzzled or hostile faces.”

Despite his work in the new spheres of fusion and jazz-rock, Brecker was equally adept in more traditional acoustic jazz settings, and his playing had caught the attention of a number of older musicians.

Randy and Michael both joined the band of Horace Silver, who was known for his funky hard bop, recording In Pursuit of the 27th Man in 1972. D

During the ‘70s Brecker appeared on albums by all-time jazz greats including Chet Baker, Ron Carter and Charles Mingus.

The Brecker Brothers, founding a jazz club and Steps Ahead

After leaving Silver’s band, Michael and Randy were encouraged to form a group of their own by an executive at Arista Records.

As The Brecker Brothers, their brand of fusion proved highly popular, with complex unison horn lines played over heavy rock back beats and bold synthesizers. Their 1975 self-titled debut album opens with ‘Some Skunk Funk’, one of their best-known tunes.

The band stayed together until 1982 before returning with a couple of come back albums in the 1990s.

In 1977 Randy and Michael had founded Seventh Avenue South, a New York City Jazz Club of their own.

Out of spontaneous gigs and jam sessions here grew the fusion band Steps Ahead, featuring Michael and the vibraphonist Mike Mainieri.

Alongside his jazz work, Brecker was carving out a prolific career as a studio musician during a time, in the 1970s and ‘80s, when it was common for pop songs to contain a short saxophone solo.

A concise instrumental interlude on a mainstream hit requires a very different approach to the average solo with a jazz group, and Brecker played masterful pop saxophone solos on hundreds of songs.

“I think I’ve always been able to adapt to many styles, provided that the music was good and I had some kind of feeling for it.”

Brecker was credited as co-leader on Cityscape (1982), a jazz-meets-orchestra collaboration with the arranger and composer Claus Ogerman.

But remarkably, he did not make his proper debut as a bandleader until 1987, when he was 38 and had been working at the highest level for almost 20 years.

On Michael Brecker he is accompanied by an A-list rhythm section: Pat Metheny, Kenny Kirkland, Charlie Haden and Jack DeJohnette. The closing track, the standard ballad ‘My One and Only Love’, begins with an epic solo saxophone cadenza.

The following few years saw him release two more albums in fairly quick succession: Don’t Try This At Home (1988) and Now You See It… (Now You Don’t) (1990), both of which utilise various band lineups and share a fusion-orientated sound.

On all three albums his plays the EWI (the electronic wind instrument, a sort of saxophone synthesiser), as well as tenor.

Throughout the 1990s Brecker continued to tour and perform with all manner of jazz, pop and rock artists.

In 1995 he made Infinity, a fairly straight-ahead session on which he guests with McCoy Tyner’s trio. The pianist is of course most famous for his role in John Coltrane’s classic 1960s quartet, and on Coltrane’s ‘Impressions’ Brecker’s burning modal playing won him a Grammy for Best Improvised Solo.

The following year he played on Herbie Hancock’s ‘The New Standard’, on which a great band – Hancock, Brecker, John Scofield, Dave Holland and Jack DeJohnette – plays jazz renditions of contemporary pop, rock and R&B songs, including The Beatles’ ‘Norwegian Wood’, Stevie Wonder’s ‘You’ve Got It Bad Girl’ and Nirvana’s ‘All Apologies’.

‘Tales from the Hudson’ and growing influence

Six years after his previous album as a bandleader, Brecker released Tales From The Hudson in 1996 on Impulse! Records.

One of his best loved albums, it won a Grammy for Best Instrumental Album, while his solo on the closing track ‘Cabin Fever’ won Best Jazz Instrumental Solo.

As one of the most influential jazz musicians of the last 40 years, countless budding jazz musicians have learned Brecker’s solos and tried to copy his distinctive sound and harmonic palette.

The Michael Brecker Collection contains transcriptions of some of his most famous solos, including some from Tales From The Hudson and his next album, Two Blocks From The Edge.

The Michael Brecker Ballad album & paying tribute to the greats

Most of Brecker’s albums prominently feature the saxophonist’s compositions, which are often characterised by a sort of hard-edged, urgency.

But in 2001 he displayed his tender side on The Nearness of You: The Ballad Songbook, playing a number of standard torch songs.

The album also features a guest appearance from James Taylor, who sings ‘Don’t Let Me Be Lonely Tonight’.

Brecker had soloed on Taylor’s original recording of the song in 1972.

“What Mike did with his unaccompanied rendition of “Naima” on those first few tours was something else. Every night that got standing ovations and people couldn’t stop applauding. It was that amazing.” – Herbie Hancock

Final years and More To Live For documentary

In 2005, after suffering back pain, Brecker was diagnosed with Myelodysplastic syndromes (MDS), which prompted a worldwide search to find him a matching stem cell donor. Although this was ultimately unsuccessful, the publicity around his plight resulted in a big rise in awareness of stem cell donation, with thousands of potential donors signing up and tens of thousands of dollars raised for testing.

The documentary More To Live For was made during this period. The film covers Brecker’s experience with leukaemia and the making of his final album, Pilgrimage.

Michael Brecker died from complications of leukaemia in January 2007. He was inducted into the Downbeat Hall of Fame the same year and awarded a number of posthumous Grammy Awards, taking his total to 15.

“Michael Brecker is an iconic musician. Michael possesses the ability, technique, and the heart and soul that only a few of the greatest jazz musicians can claim. I submit that he is the master musician of our time. But, beyond all that, Michael has always striven to find truth in the musical moment. That’s why his playing touches the spirit of so many of us. One note, and you know it’s Mike.” Peter Erskine

We hope this quick look through the life and times of this jazz saxophone great has given you a little more insight into the music and career of Michael Brecker – or perhaps reminded you of some of his albums that you haven’t listened to for a while.

If you have other Brecker-related recordings, performances or similar that you think should be highlighted, feel free to use the comments section below.

You can also find more info the other musicians he worked with on this site, including in our run down of iconic Kenny Wheeler albums (on which Brecker was a guest) and the best jazz drummers of all time (more than one Brecker bandmate!)