The Most Famous Miles Davis Albums in Jazz History 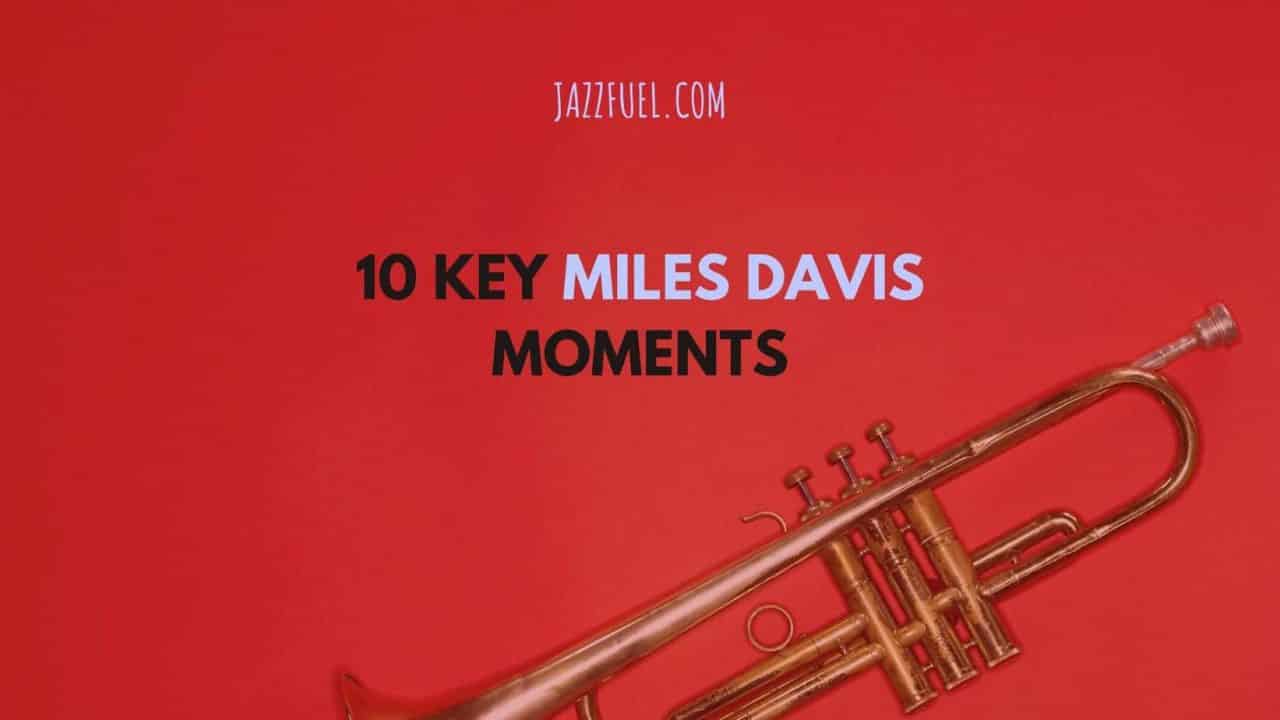 In this article we take a look at 10 of the best Miles Davis albums and moments that shaped the career of this jazz trumpet legend.

Jazz trumpeter Miles Davis was a restless innovator and a cultural icon, whose music changed dramatically multiple times over the course of his five-decade career.

He was at the forefront of various key musical movements and, as perhaps jazz’s greatest bandleader/musical director, helped bring a number of fellow all-time-greats to prominence.

So here, in chronological order, are 10 defining albums and moments – including bands, recordings, books and films – that helped shape his remarkable career and the legacy he leaves behind.

Moving to New York City and recording with Charlie Parker

In his late teens Miles Davis left East St. Louis, where his family were wealthy landowners, to move to New York City and attend the prestigious Juilliard School of Music.

Meanwhile, he immersed himself in the city’s nascent bebop scene focused around 52nd Street in Manhattan, eventually dropping out of Juilliard as his jazz career took off.

Joining Charlie Parker’s quintet in the mid 1940s was a huge break for the young trumpeter. Parker was already a big star, and Davis was replacing the great Dizzy Gillespie in the band. Miles could not compete with Gillespie’s high trumpet range, so he found his own cooler improvisational voice, mostly remaining within the mid-register.

On classic tracks for Savoy and Dial Records like ‘Now’s The Time’, ‘Moose The Mooche’ and ‘Yardbird Suite’, Miles’ measured approach, placing great emphasis on the use of space, provides a stark but highly effective contrast with Parker’s more overtly virtuosic alto style.

Birth of the Cool and work with Gil Evans

Gil Evans had begun to make a name for himself for his arrangements for the Claude Thornhill Orchestra in the mid-1940s.

Along with other forward-thinking musicians and composers/arrangers – like baritone saxophonist Gerry Mulligan and pianist John Lewis – he began to host workshops in his basement apartment on 55th Street.

Miles, with his newfound fame as a result of his work with Parker, was the perfect front man for this new project, which came together as a nine-piece band to record Birth of the Cool in 1949 and 1950.

With contrapuntal arrangements that were inspired by impressionist classical music, the nonet was an important part of the Cool jazz movement, which saw softer, more relaxed sounding music marketed as an alternative to the ‘hotter’, more frantic sounds of bebop.

Gil Evans would deploy his distinctive arranging style on a number of later large ensemble Miles Davis albums, including Miles Ahead, Porgy and Bess and Sketches of Spain.

‘Round About Midnight, Columbia Records & the First Great Quintet

As his reputation grew, Miles performed at the 1955 edition of the Newport Jazz Festival.

His haunting rendition of Thelonious Monk’s ‘‘Round Midnight’ was witnessed by George Avakian of Columbia Records, who was impressed enough to hand Davis a major recording contract.

Miles Davis’ first album for Columbia, Round About Midnight, contains the definitive rendition of the Monk ballad, and features his First Great Quintet: John Coltrane on tenor saxophone, Red Garland on piano, Paul Chambers on double bass and Philly Joe Jones on drums.

However, before it could be released there was the matter of his existing contract with Prestige, who Miles still owed four albums.

Over two one-day sessions in 1956 he recorded Cookin’, Relaxin’, Workin’ and Steamin’ with the same quintet. Although they were made in a rushed, even throwaway fashion, these informal sets of jazz standards are still revered as some of the greatest 1950s hard bop on record.

Experiments in modal jazz and Kind of Blue

Inspired by the theoretical work of George Russell, Miles Davis had begun to experiment with modal jazz in the late 1950s, where a chord and corresponding scale might remain static for some time, in contrast to the tonal key centres and cadences of traditional western harmony.

This was seen in Davis’ ‘Milestones’ from the album of the same name, and then on ‘So What’, from the even more famous Kind of Blue.

Regularly cited as both the best and most commercially successful jazz record of all time, the 1959 album contains some of the most influential and atmospheric music ever recorded.

‘So What’, the opening track, primarily uses the D Dorian mode, but moves up a half step to E flat Dorian in the eight-bar ‘bridge’. Pianist Bill Evans brings an introspective touch to the beautiful ballad ‘Blue in Green’.

Davis speaks frankly about his extraordinary life, his music, and his experiences of racism in this book that was co-authored with Quincy Troupe and published in 1989.

With his trademark colourful language, he proves an insightful critic of his own artistic output and also gives interesting insights into his relationships with other jazz greats, characterising Charlie Parker as a ‘greedy motherf*****’, for example.

A number of other books have been written about Miles and his music, including Ian Carr’s in-depth Miles Davis: The Definitive Biography.

In 1964 Miles was working towards finding the personnel of what would become his Second Great Quintet.

He had settled on the young rhythm section of pianist Herbie Hancock, bassist Ron Carter and drummer Tony Williams, who was still just 17. George Coleman was on tenor saxophone, but would later be replaced briefly by Sam Rivers, then ultimately by Wayne Shorter.

The band was booked to play a benefit concert for the Civil Rights Movement at Philharmonic Hall, a major new venue.

Miles’ sidemen, already nervous due to the prestige of the event and the setting, were put further on edge when they were told that they would not be paid for the performance shortly before taking to the stage.

According to pianist Herbie Hancock, “when we walked away from that concert, we were all dejected and disappointed. We thought we had really bombed … but then we listened to the record – it sounded fantastic!”

The slower and medium tempo numbers from the concert were released as My Funny Valentine, with the frantic up-tempo tunes issued as the album Four & More.

Hancock, Carter and Williams are credited with having reinvented the role of the rhythm section in jazz, and their clever interplay and metric modulations on My Funny Valentine are particularly notable.

ESP and the Second Great Quintet

Davis, Shorter, Hancock, Carter and Williams all contributed compositions to the band’s repertoire at various points on Miles Smiles, Sorcerer and Nefertiti, as Miles embraced a style that built upon his modal experimentations of the late 1950s and added some elements of the free jazz movement that was being pioneered by Ornette Coleman at the time.

When playing live the quintet continued with a selection of jazz standards from Miles’ earlier years – ‘Autumn Leaves’, ‘So What’, ‘All of You’ – but in a wild, exploratory fashion. The Complete Live at the Plugged Nickel 1965 album is a great example.

Miles goes electric – In a Silent Way and Bitches Brew

Miles had begun to experiment with some electric instrumentation on Miles in the Sky and Filles de Kilimanjaro (both 1968), but In a Silent Way (1969) is considered his first full-blown jazz fusion album.

Comprising just two long tracks, it can be seen as a return to the static harmonic landscape of Miles’ late ‘50s modal work, but filtered the through the lens of late ‘60s rock and fusion.

The music, which bubbles away on single chords and largely dispenses with traditional song forms, was controversial at the time but is now considered a classic part of the Davis discography.

The music, played by a larger ensemble, is highly improvised, with the bandleader giving visual and verbal cues during the recording, and also makes use of heavy editing and production.

Davis had a period of near inactivity during the second half of the 1970s, as he struggled with substance addiction and poor health.

He returned in 1981 with The Man With The Horn, which saw him playing funk and fusion with younger musicians including Mike Stern, Bill Evans (the saxophonist) and Marcus Miller, the electric bass player and producer who would be a key collaborator over the following decade.

Davis’ 1980s work was generally poorly received by critics, but was commercially successful, with his band playing at large venues and stadiums.

The 1985 Miles album You’re Under Arrest famously saw him covering the contemporary pop songs ‘Human Nature’ (made famous by Michael Jackson) and Cyndi Lauper’s ‘Time After Time’, which he likened to his earlier interpretations of old Broadway show tunes.

Miles on film: Birth of The Cool and Miles Ahead

As a cultural figure Miles has proved endlessly fascinating: for his drastic musical shifts, his bold sense of fashion, his provocative, opinionated public persona, and for his raspy speaking voice (caused by a 1955 operation on his larynx).

Stanley Nelson’s 2019 documentary Miles Davis: Birth of The Cool provides the viewer with behind the scenes insight, with interviews with Davis’ former band mates (including Wayne Shorter and Herbie Hancock) and romantic partners (including Frances Taylor, his first wife, and Juliette Grecco, with whom he began an affair in Paris in 1949).

Meanwhile, Miles Ahead, Don Cheadle’s 2015 biographical drama, jumps between time periods to look at various moments in the trumpeter’s career.

Although there were criticisms of its level of historical accuracy, it received some positive reviews for its fun, energetic portrayal of Miles in almost an action hero-type role.