Gerry Mulligan | 10 Essential Albums From The King of Baritone Sax 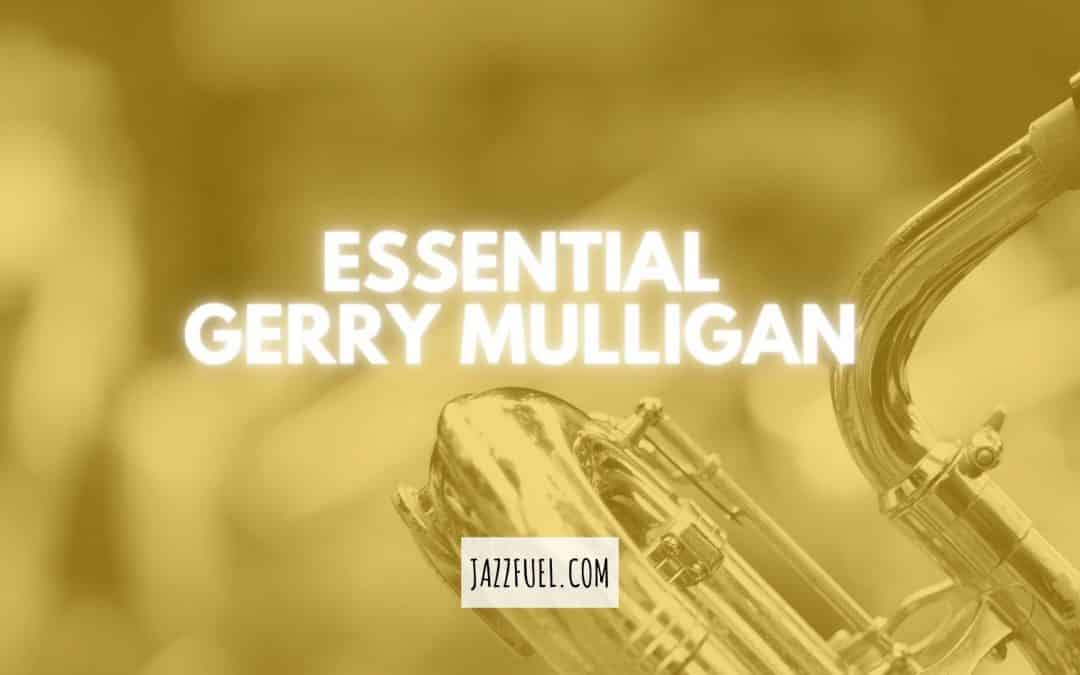 One of the first artists to popularise the idea of the baritone saxophone as an improvising solo instrument was the iconic jazz musician Gerry Mulligan, whose light, delicate tone and highly melodic style are perhaps at odds with the baritone saxophone’s reputation as a powerfully honking, rather unwieldy horn.

The baritone sax is the largest and lowest-pitched of the four commonly played members of the saxophone family and, although it is part of the standard big band lineup, it is heard relatively infrequently as a solo instrument in small group jazz.

Across a 50 year career, his work on Miles Davis’ seminal Birth of the Cool album, his innovative chordless quartets with Chet Baker and Bob Brookmeyer, his own popular Concert Jazz Band and later cross-cultural projects would all help to see him remembered as a jazz trailblazer, and perhaps the most important baritone saxophonist of all time.

So, without further ado, let’s take a look at 10 brilliant albums that tell the story of Gerry Mulligan, AKA ‘Jeru’.

Miles Davis – Birth of the Cool

Born in Queens, New York, in 1927, Gerry Mulligan’s father’s itinerant engineering job meant that they lived in various places across the United States during his childhood years.

Whilst learning the saxophone and clarinet as a teenager, he also began to take an interest in arranging, and it was as an arranger for various dance bands that he found some of his first professional work.

Whilst working for the Claude Thornhill Orchestra he met Gil Evans, a staff arranger for the band. He moved into Evans’ New York apartment and was introduced to a scene of forward-thinking musicians including Miles Davis and John Lewis (the pianist and composer who would go on to form the Modern Jazz Quartet).

Out of this, a nine-piece band was formed, which recorded the hugely influential Birth of the Cool album across three sessions in 1949 and 1950.

Its sound was influenced by classical music, with an impressionistic colour palette and the inclusion of tuba and French horn in a six-piece wind section.

Davis was the band’s frontman, but Mulligan certainly played a key role, composing three of the numbers – “Jeru”, “Rocker” and “Venus de Milo” – and lending his contrapuntal arranging style to three others, as well as playing baritone saxophone.

In 1952 Mulligan hitchhiked across America to Los Angeles, where he found arranging work for Stan Kenton’s orchestra.

Whilst there he began performing at the Haig Club in Hollywood, where he met the young trumpeter Chet Baker.

While the vast majority of jazz ensembles include a chordal instrument to provide harmony – typically piano or guitar – Mulligan’s new quartet featured his baritone saxophone and Baker’s trumpet backed by a bare-bones rhythm section of just double bass and drums.

This left more space for the horns to improvise together contrapuntally, with the two frontmen developing an instinctive rapport.

On ‘Bernie’s Tune’ and ‘Makin’ Whoopee’, the horns accompany each other, improvising simultaneously over the bass and drums.

With an 11-month residency at the Haig, the band was one of the most popular groups of the new ‘cool jazz’ movement, a lighter, more reflective style that was marketed as an alternative to the fiery bebop movement that had dominated the jazz discourse since the mid-1940s.

“We would just play a whole bunch of different things. And that was one of the joys of playing with Chet because we were able to work together so easily in that way. I had never experienced anything like that before and not really since.” – Gerry Mulligan

This 1953 date sees the Gerry Mulligan/Chet Baker group joined by Lee Konitz, with whom the baritone saxophonist had worked a few years earlier in the Birth of the Cool band.

The alto saxophone’s register sits perfectly between the trumpet and baritone, with Mulligan and Baker playing neat riffs behind Konitz’s tricky improvised lines, the addition of an extra voice allowing for slightly more intricate arrangements.

Mulligan’s beautifully sculpted original composition ‘Sextet’ is a highlight, along with Konitz’s stunning one-chorus solo on ‘I Can’t Believe That You’re In Love With Me‘.

The Mulligan-Baker group was brought to an abrupt halt in 1953.

Gerry, along with Chet and many other 1950s jazz musicians, had become addicted to heroin and that year he spent six months in prison on narcotics charges.

While Baker would struggle with addiction for the rest of his life, Mulligan eventually managed to get clean with the help of psychiatry.

“Mulligan’s arrest showed how far the heroin epidemic had penetrated the jazz world. Evidence suggests that the mafia targeted jazz musicians as a suitable market in the 1940s, with outstanding success.” – Richard Williams, The Guardian

When Mulligan was released from prison he tried to reform the group with Chet.

However, while Mulligan was locked up, Baker had reinvented himself as a vocalist with his ‘Chet Baker Sings’ album and was becoming a big star. He declined Mulligan’s offer for financial reasons.

Instead, the saxophonist formed a new version of the group with valve trombonist Bob Brookmeyer as the second front-line instrument.

In 1954 the band was invited to play at the third Paris Jazz Fair, where they received a rapturous reception in the Salle Pleyel concert hall. The tracklist of this live album includes ‘Walkin’ Shoes’ and ‘Five Brothers’, two of Mulligan’s best known compositions.

Mulligan’s chord-less quartet format was innovative, arguably paving the way for seminal groups like Sonny Rollins’ tenor-bass-drums trio and Ornette Coleman’s revolutionary free jazz quartet with cornettist Don Cherry, which both did away with harmony instruments.

But, with its focus on contrapuntal interaction between the horns, the Mulligan band actually looked backwards for inspiration. Specifically, at the collective improvisation of the 1920s Dixieland style, where independent linear parts weave a joyful tapestry of sound.

“With Gerry Mulligan, you feel as if you’re listening to the past, present and future of jazz all at one time,” – Dave Brubeck

But this 1957 meeting makes for an enjoyable album, in spite of a few slightly ragged moments.

Mulligan’s ‘Decidedly‘ sits nicely alongside a selection of classic Monk compositions and the pianist’s arrangement of the standard ‘Sweet and Lovely’, while Shadow Wilson and Wilbur Ware are excellent on drums and double bass respectively.

As Mulligan’s star grew he began to make a series of albums that placed him with another acclaimed soloist – including Ben Webster, Paul Desmond, Stan Getz and Johnny Hodges – with these juxtapositions of often quite disparate approaches making for some fascinating results.

Annie Ross had pioneered the art of vocalese with her hit “Twisted”, which put lyrics to an improvised tenor saxophone solo by Wardell Gray.

She found further fame as a member of the popular vocal trio Lambert, Hendricks and Ross.

On this album, which was released in 1959, she joins Mulligan on a lovely programme of standards that includes arrangements of ‘I Feel Pretty’ (from West Side Story) and Duke Ellington’s ‘It Don’t Mean a Thing (If it Ain’t Got That Swing)‘.

Ross is accompanied by two versions of the Mulligan quartet: first, we hear Art Farmer in the trumpet chair with Bill Crow on bass, while the second half sees a reunion with Baker, with Henry Grimes on bass. Dave Bailey is on drums throughout.

It is relatively rare to hear a vocalist in a chordless group setting, but the snappy interplay between Ross and Mulligan’s baritone more than makes up for the lack of a guitar or piano.

In 1960, as he sought to reconnect with the larger ensembles and formal written arrangements of his early career, Mulligan formed a 13-piece group called the Concert Jazz Band.

Its intricate charts maintained something of a cool jazz aesthetic, although the overall style is closer to the classic big band sound than the Birth of the Cool recordings.

The band stuck with the piano-less rhythm section that had become Mulligan’s signature, so there are moments when his baritone solos have just the sparse sound of bass and drums for accompaniment.

As a result, there are faint echoes of the classic group with Baker, especially on a moving rendition of ‘My Funny Valentine‘ – the Rodgers and Hart ballad that provided an early hit for that quartet.

The A-list personnel includes tenor saxophonist Zoot Sims and drummer Mel Lewis, who can always be relied upon to conduct proceedings in supremely relaxed, swinging fashion.

Following this, its 1960 debut, the Concert Jazz Band would remain active until 1964, with a live album from the Village Vanguard rated particularly highly.

The title of this 1962 album was also Mulligan’s nickname and the name of one of the compositions he contributed to the famous Birth of the Cool sessions.

Jeru provides a relatively rare chance to hear him in an informal small group setting accompanied by a traditional piano-led rhythm section.

The fantastic Tommy Flanagan is at the keyboard, while the somewhat surprising inclusion of Alec Dorsey on congas lends things a rather happy-go-lucky air.

Mulligan was always willing to throw himself into adventurous and unfamiliar artistic situations, and the music on this 1974 album sounds like nothing else in his discography.

Recorded in Milan, Summit is a collaboration with Astor Piazolla, the bandoneon (a type of concertina) player, composer, arranger and legend of Argentinian tango.

Piazolla, who was apparently a long-time fan of the saxophonist’s work, arranged all the material – seven compositions by the Argentinian and one by the American – for a large ensemble that includes electric instruments and a string section.

This perhaps isn’t one for the jazz purists, but there is some amazing music here.

Mulligan had experimented with various styles during the late 1960s and ‘70s, even recording some rock ‘n’ roll and contemporary rock songs.

But in the 1980s he largely returned to his straight-ahead jazz roots, settling into his status as a living jazz legend.

In 1982 he teamed up with vocalist Mel Tormé and pianist George Shearing for a high profile concert at Carnegie Hall. Mulligan wrote the arrangements for the supporting big band, and he also contributes supporting vocals, as well as excellent baritone solos.

There is also a new Mulligan-penned lyric to his old composition ‘Jeru’, which is sung by Tormé.

This fun, star-studded affair at America’s most famous concert hall demonstrates how successful the saxophonist’s career had been, and how popular his music had proved with the jazz-loving American public.

Mulligan died in 1996, at the age of 68, following complications after knee surgery, having also been suffering from liver cancer.

“Mr Mulligan was one of the great improvisers of postwar jazz. In his hands, the baritone saxophone, usually a burly, stiff creature, became supple and elegant.” – Peter Watrous, New York Times

Looking for more great albums from the legends of jazz? Head over to our top ten list of the best records in jazz history or take a look at our rundown of the most iconic jazz solos of all time.