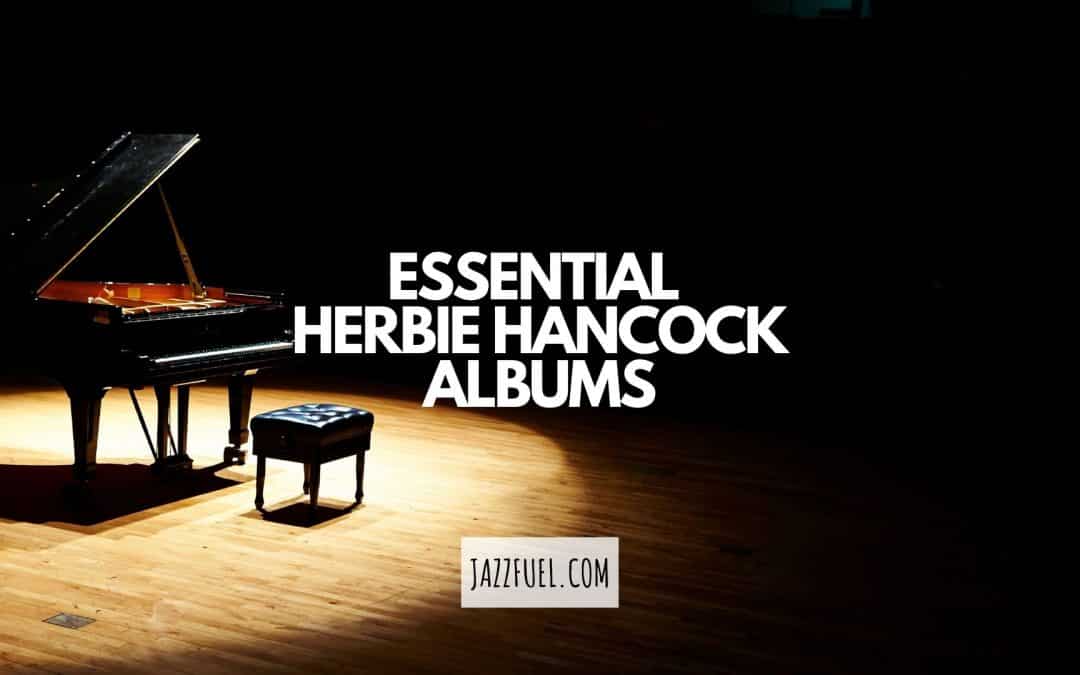 Jazz pianist and composer Herbie Hancock is widely considered to be one of the most influential figures in the history of jazz. We take a look at 10 of his most iconic albums which track his journey as a musician.

He not only performed as both sideman and bandleader on some of the important jazz albums in history, he was also at the forefront of the emergence various styles of jazz, including modal jazz in the 1960s and the emergence of jazz fusion in the 70s.

Revered by all, and with a stellar career spanning six decades (and counting), selecting just ten albums from his vast and eclectic discography is extremely difficult.

Nevertheless, here are our choices, that celebrate this great piano master in different periods of his illustrious career. As always, let us know your thoughts in the comments below!

An equally skilled composer as he is a pianist, the disc features two of Hancock’s most enduring compositions, ‘Watermelon man’ and ‘Driftin’, his playing on both demonstrating his rare ability to balance harmonic sophistication with accessibility.

Note the ease by which Hancock can reinterpret well-worn forms (such as the 16 bar blues structure of Watermelon Man) with creativity and personality, taking the funky, blues-rooted groove, and breaking out of it with daring and creative harmonic choices.

Recorded during his time as a member of Miles Davis’ legendary second great quintet, and featuring two of his fellow band mates, Ron Carter (bass) and Tony Williams (drums), Empyrean Isles is viewed by many as one of Hancock’s masterworks.

The record is adventurous and challenging, packed full of forward-thinking compositions and playing from Hancock and his quartet.

We hear this perhaps most clearly on ‘The Egg’ an elongated exploration of rhythmic ostinato, which has trumpeter Freddie Hubbard blowing freely over a repeated rhythm.

Much like Takin’ Off, the record features another hugely popular hit of Hancock’s alongside these avant-garde explorations, the instantly recognisable ‘Cantaloupe Island’ providing a stylistic contrast to the rest of the album.

Another of Herbie Hancock’s early career milestones, Maiden Voyage finds the pianist and composer at the peak of his creative powers, supplementing the same line up from Empyrean Isles (recorded 9 months earlier) with tenor saxophonist George Coleman.

Perhaps outwardly less daring than the group’s explorations on Empyrean Isles, the record features exceptional playing from all, resulting in a deep and accessible album full of varied solos, textures and harmonies, influenced by the modal jazz scene of the day.

Listen out for Hancock’s melodic writing and arranging throughout, designed to conjure images of an oceanic landscape, again featuring compositions such as ‘Maiden Voyage’ and ‘Dolphin Dance’ that would later go on to become jazz standards.

Utilising the unusual front line instrumentation of alto flute, bass trombone and flugelhorn (none of which take any solos on the record), Hancock’s sixth album as a leader Speak Like a Child further cemented his reputation as an ever evolving, deeply lyrical and forward-thinking creative force.

Much like how Hancock seeks to conjure images of the ocean throughout his writing on Maiden Voyage, on Speak Like a Child Hancock aims to capture certain childhood qualities that we lose as we enter adulthood, such as purity and spontaneity.

Featuring an open harmonic landscape (in his liner notes Hancock alludes to the fact that he arranged the chord voicings for the front line instruments to generate a wide range of possible colours for the improviser) and simple memorable melodic themes, this is essential listening for all jazz fans, and an album that just gets deeper with subsequent listening.

Hancock’s first release after his departure from Blue Note, Fat Albert Rotunda was drawn together by a series of compositions written by Hancock for Bill Cosby’s cartoon show ‘Fat Albert’.

His first foray into the world of jazz-funk, and arguably signifying the direction that he would later take with Head Hunters, the album sees Hancock draw heavily from soul music, blending the sound of his Fender Rhodes, with catchy horn riffs and funky rhythmic comping.

The rich harmonies heard on ‘Tell Me a Bedtime Story’ showcase Hancock’s exceptional compositional skills, and features from the likes of Joe Henderson and Johnny Coles make this interesting record well worth seeking out.

Following a trio of experimental albums released in the early 1970’s (Mwandishi, Crossings, and Sextant), Head Hunters, released on Columbia records in October 1973 was an enormous hit for Hancock, becoming the first jazz album to sell over 1 million copies.

Viewed by many as one of the most important jazz fusion recordings of all time, the album features Hancock extensively on various synthesizers, and fuses elements of funk, groove and R&B.

Whilst Head Hunters appears to be a marked departure from the records that he had been making for Blue Note only a few years beforehand, there are common themes to be found: deep grooves, strong melodic writing and forward thinking improvisational choices are all trademarks of Hancock’s style present throughout his career, heard on this record through the prism of jazz fusion.

Herbie Hancock’s follow up to the hugely successful Head Hunters packs just as strong a punch as its predecessor.

Fusing deeply funky and complex grooves with sophisticated harmonies, the musician once again reminds us why he is considered one of the most important jazz pianists and composers in the history of the music.

Constantly evolving and searching for new sounds, on Thrust we hear him debuting synthesizers (such as ARP’s string synthesizer), alongside his much-loved Fender Rhodes and Clavinet, pushing each instrument to its limit (this is particularly evident on the opener, ‘Palm Grease’).

The sublime ‘Butterfly’ offers a change of pace, with glistening synthesizers providing the backdrop for Maupin’s soprano saxophone to float freely over the top, before the disc closes with the driving ‘Spank-a-lee’ featuring Maupin’s tenor run through a ‘wah’ pedal.

Recorded and released in Japan, The Piano sees Hancock move away from the synthesizers and funk grooves that had brought him so much commercial success on records such as Head Hunters and Thrust.

He returns to his primary instrument, the piano, to record a set of solo interpretations of three jazz standards and four originals.

Hancock elegantly segues through ‘My Funny Valentine’, ‘On Green Dolphin Street’ and ‘Someday My Prince Will Come’ (all tunes associated with his time in Miles Davis’ band), stretching out and showcasing his endless creativity, before playing four originals, devised specifically for the solo piano, and usually performed as a suite.

Somewhat overlooked upon its initial release, Mr Hands features a real mix of styles, performed by different rhythm sections across the entirety of the record.

A return to form after a series of less celebrated electric albums, the listener is treated to Hancock’s interpretations of Afro-Caribbean, funk and fusion grooves, performed on a myriad of different keyboards and synthesizers from Hancock’s vast collection.

The track ‘Textures’ is a particular highlight, where Hancock plays all of the instruments himself, building layer upon layer of sound, as is the deeply funky ‘4.AM’ which sees Hancock reunited with old friend and virtuoso bassist Jaco Pastorious.

A celebration of one of the most important composers of the 20th century, Gershwin’s World was released to coincide with the 100th anniversary of George Gershwin’s birth, and features Hancock alongside an all-star cast of guest musicians.

Stevie Wonder’s harmonica and Wayne Shorter’s soprano saxophone can be heard behind Joni Mitchell’s lilting vocals on ‘Summertime’, in addition to the appearances from likes of Chick Corea and Eddie Henderson, amongst others.

Perhaps the stand out moment on the record is operatic star Kathleen Battle’s interpretation of Gerswhin’s ‘Prelude in C# Minor’ – hardly a jazz standard!

Hancock stated that the aim of the record was to personalise this much-loved and much-played material, whilst staying true to the spirit of jazz.

Seeking to dig into the heart of each composition and remodel them in their own way.

The result is a complex and varied album, each track different than the last, but with a common thread of the genius of both Gerswhin and Hancock binding them all together.

Thanks for joining us for this look through 10 essential Herbie Hancock albums, many of which regularly find themselves listed amongst the best jazz albums of all time!

If you’re looking for more information and music about the greatest jazz musicians of all time, we’ve got you covered here.