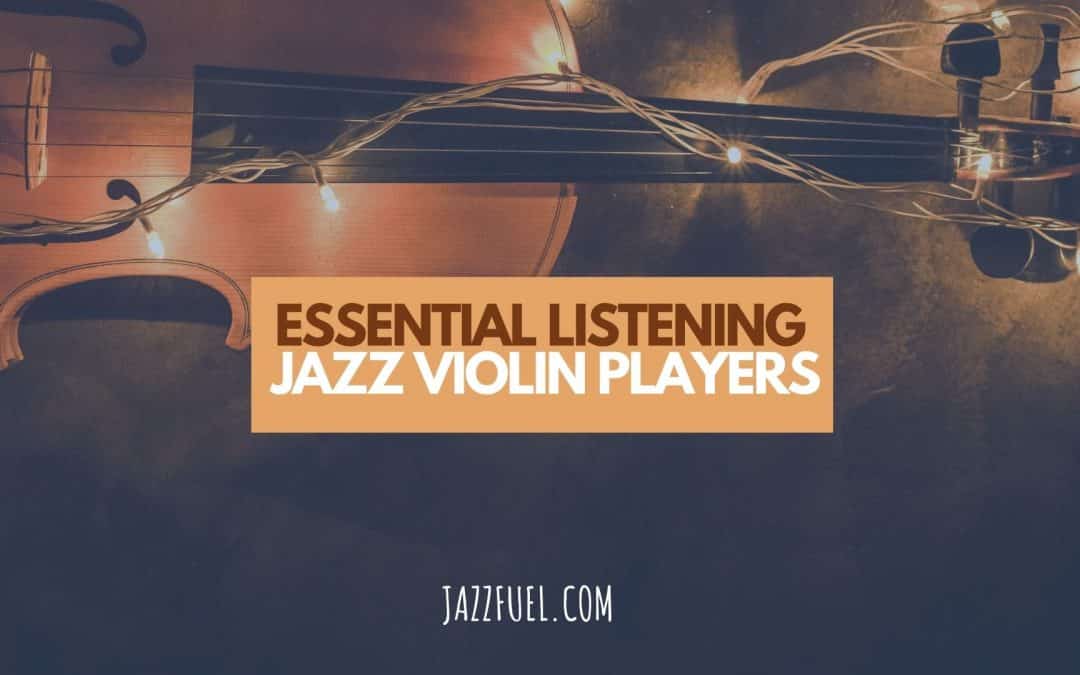 They may not grab the headlines in most styles of the music, but jazz violinists deserve their fair share of attention too, as we’ll see in this article.

Jazz music may conjure up images of saxophone and trumpet for most people, but in truth almost every instrument under the sun has contributed to the art form at one time or another.

So join us for a deep dive into one of these lesser known groups – jazz violin players – and a look at some of the best musicians who play the style, both old and new.

In fact, as you’ll see, these violinists cover 7 decades of jazz together and prove that the instrument is not just reserved for classical music!

Known as the “grandfather of jazz violinists” French musician Stephane Grappelli attended the prestigious Conservatoire de Paris (despite his family’s poverty), giving him a more formal musical education than many of his contemporaries.

He rose to prominence alongside Gypsy Jazz guitarist Django Reinhardt (who certainly hadn’t had the same type of musical training) with their Quintette du Hot Club. Post-war, and against the backdrop of the emergence of bebop music, the group’s success waned and the violinist declined into relative obscurity.

In 1971, after many years of low level background gigs, English chat-show host (and serious jazz fan) Michael Parkinson invited the musician onto his television show, pairing him up with the famed classical violinist Yehudi Menuhin with whom he made three critically acclaimed albums together.

The return to his Hot Club sound two years later was met with widespread glee and Grappelli returned to the limelight and a busy touring schedule for the rest of his career.

He died in 1997, aged 89, having recorded with the likes of Duke Ellington, Oscar Peterson and even Pink Floyd, as well as influencing a whole generation of budding jazz violinists.

Jazz violin purists might disagree with this one, as Ornette Coleman was of course primarily an alto saxophone player who pioneered the free jazz movement.

But, despite that, he was known for exploring jazz violin and trumpet in his performances and recordings too.

Influenced by his friend and fellow avant-garde jazz musician Albert Ayler, his work in the late 60s (after his famed quartet finished) brought his violin playing to the fore.

His album At The Golden Circle in Stockholm (1965) is a great example of this.

French jazz violinist Jean Luc Ponty is renowned as a visionary musician whose early career was spent juggling a position in a symphony orchestra with late night sessions at Parisian jazz clubs.

A passion ignited by the music of Miles Davis and John Coltrane won, and he went on to perform with many of the finest European jazz musicians on the scene.

He got a break in the US in the late 1960s, signing to the World Pacific label and becoming and in-demand sideman for American artists.

His prominence in the field of jazz-rock was confirmed with recordings for John McLaughlin and the Mahavishnu Orchestra.

Another French violin player, Didier Lockwood was highly influenced by his older compatriot Jean Luc Ponty and forged his own career of jazz infused with rock and electronic experimentation.

His debut album came in 1972 and he would release more than 20 more in a career which finished with his death in 2018.

Despite his contemporary style, he cited Stephane Grappelli as an important influence and his 2000 album in tribute to the legendary string player is well worth a listen.

Something of a pioneer several times over as a female, African American violinist playing jazz, Regina Carter has forged a unique sound which incorporates jazz, R&B, Latin, country, classical and blues music.

A recipient of a Doris Duke Artist Award and the MacArthur “genius” grant, she first rose to prominence in the late 80s as part of all female pop-jazz quintet Straight Ahead.

Alongside a career which has seen her appear on most of the major jazz festivals internationally, she has also performed with a who’s who of the pop world, from as Lauryn Hill and Mary J. Blige to Billy Joel and Dolly Parton.

Kentucky-born violin player Zach Brock rose to wider recognition for many as part of the early iterations of Snarky Puppy, who he met whilst studying classical violin at Northwestern University and honing his playing on the vibrant Chicago jazz scene.

Voted Rising Star Violinist in Downbeat Magazine’s 2013 critics poll, he went on to work with modern jazz greats such as Stanley Clarke and Phil Markowitz, as well as working on his own projects which have been released on iconic independent label Criss Cross Jazz.

“I called the great French violinist Jean-Luc Ponty and I said ‘So, who’s the new cat? Who’s got the stuff? And he said Zach Brock.” – Stanley Clarke

Just in case you needed further persuading that the history of jazz violin has a longstanding love affair with France, our final (and youngest) pick for this list is Paris-born violinist Scott Tixier.

Now relocated to the US where he teaches at the University of North Texas, he has juggled a busy career as a first-call session musician (Stevie Wonder, Elton John, Christina Aguilera) with that of an in-demand jazz musician who has worked with Chris Potter and Anthony Braxton (to name just two) and released his own albums on the renowned Sunnyside label.

Of course, even with an instrument as niche as jazz violin, there are many more brilliant musicians we could have included.

Feel free to share your input in the comments section and we’ll be back soon to update.

In the meantime, if you’re looking for more jazz featuring stringed instruments, check out our guide to some of the most iconic large ensemble albums in history, or a round up the Gypsy Jazz style which first launched the violin into the mainstream.