10 of the Best Charles Mingus Albums in Jazz History 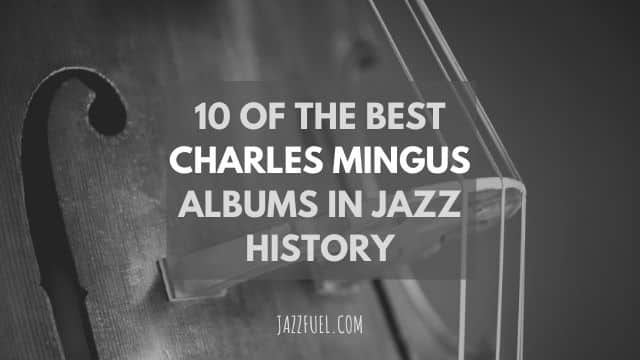 Hailed as one of the most important jazz composers & bassists in history, we’ve charted the life of the legendary Charles Mingus through 10 of his most celebrated albums.

His mother died before he turned one and his father took the family to Los Angeles suburbs where Charles Mingus grew up.

The young Mingus started taking bass lessons from New York Philharmonic bassist Hermann Rheinshagen at the age of 20 and never looked back.

Despite his relatively short life (he died aged 56) his career intersected some of the most important times in jazz history, spanning traditional jazz with Louis Armstrong and Bebop with Dizzy Gillespie through to the free jazz and Third Stream movements with which he was an integral part.

For this article, we’ll take a look at his 10 most influential albums throughout this journey.

Mingus at the Bohemia (Debut/Prestige, 1955)

Before becoming a bandleader, Charles Mingus toured and recorded as a sideman with many of the leading jazz musicians at the time including Louis Armstrong, Charlie Parker, Lionel Hampton and Roy Eldridge.

He also performed briefly with Duke Ellington but was allegedly, due to his bad temper, one of the few musicians who got fired by the great composer and pianist!

After his arrival to New York in the early 50s, Mingus joined up with drummer Max Roach to found their own record label: Debut Records. This was the start of his career as a bandleader.

Mingus at the Bohemia is arguably one of his most influential albums during that early time.

It was recorded live at the Café Bohemia in New York and is the first where you can identify a true Mingus sound.

It has already the ‘jazz workshop‘ character; a term used by Mingus to describe his working band that would experiment with songs live on stage.

“Jump Monk” is dedicated to Thelonious Monk and underlines Mingus’ similar status as a unique individualist.

“Work Song” (not to be confused with Nat Adderley’s tune of the same name) reflects on the Afro-American history and has a very bluesy character. It already has elements of the popular Soul Jazz era of the 60s.

“Septemberly” combines two jazz standards – “September in the rain” and “Tenderly” – whereas “All the Things you are C#” combines the standard with Rachmaninow’s Prelude in C#.

This shows the beginnings of Mingus’ interest in the Third Stream movement, fusing jazz and classical music.

It’s the first album where he taught all his compositions by ear to the musicians instead of writing them down – an idea coming straight out of his Jazz Workshop concept, which also relies heavily on free and group improvisations.

The title track Pithecanthropus Erectus refers to the “first human” and is divided in four sections:

In the last part the collective improvisation reaches a dissonant climax. “Profile of Jackie” is dedicated to his alto saxophonist Jackie McLean and is based on Chelsea Bridge.

Take a listen to his version of “A Foggy Day” – it’s based on the George Gershwin tune, but is inspired by an onomatopoeic description of a foggy day in San Francisco, with the musicians imitating the street noise, car honking, ship horns, police whistles etc.

The longest tune “Love Chant” is another good example of the Jazz Workshop: different rhythms, collective improvisation based on a loose theme.

In summary this album is Charles Mingus’ successful attempt of overcoming the formal language of conventional jazz.

The Clown is the immediate successor to Pithecanthropus Erectus.

Its opening track “The Haitian Fight Song” is the first recorded blues by Mingus and serves as the initial idea to his Blues Album in 1960. “Blue in Cee” is another heavily swinging blues in the alternating keys of C and Bb.

The album also features Mingus’ famous composition “Reincarnation of a Lovebird” which is a dedication to Charlie “Bird” Parker, one of Mingus’ biggest idols: “it’s my feeling about Bird. I felt like crying when I wrote it.”

The title track “The Clown” is one of Mingus’ experiments using poetry.

Famous TV and Radio host Jean Shepherd improvises on a story about a Clown, who wants to be liked by many people, does riskier and riskier things and ultimately falls to his death.

The album was well received and further cemented Mingus’ status as a leader in the avant-garde jazz scene.

Mingus Ah-Um may well be Charles Mingus’ most popular album and includes compositions which are now considered jazz classics.

In 2012 the album was selected for the Grammy Hall of Fame, receiving 5-star reviews from all major magazines and the Penguin Guide to Jazz calls it “an extended tribute to ancestors”.

Mingus honours many of his musical idols on this record:

The Gospel-inspired “Better Get It In Your Soul” features an ecstatic band with the bassist driving a seething gospel hard bop feel. It culminates in a solo by tenor saxophonist Booker Erwin where he plays like a preacher over the clapping of the entire band.

The famous composition “Fables of Faubus” is named after Orval Faubus the notorious governor of Arkansas who opposed desegregation and had to be overruled by president Eisenhower.

Downbeat Magazine writes: “Mingus has something to say, knows how and through whom to say it, and it is all stated with communicative authority.” 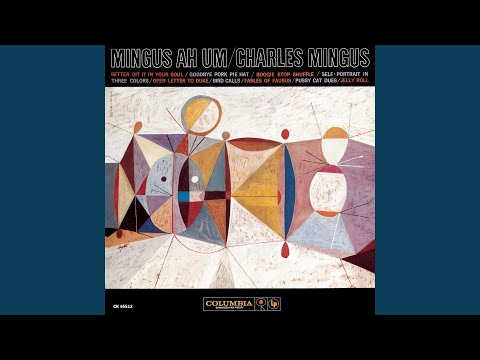 Atlantic record producer Nesuhi Ertegün suggested to Mingus that he record an entire Blues album, since some critics had the opinion he wouldn’t swing enough and that Mingus was doing too intellectual, experimental music.

He answered: “I was born swinging and clapped my hands in church as a little boy, but I’ve grown up and I like to do things other than just swing. But blues can do more than just swing. So I agreed.”

The opening track “Wednesday Night Prayer Meeting” is reminiscent once more of the Gospel music in Mingus’ childhood.

The bands shouting and clapping can be heard driving the soloists throughout this soulful album.

Cryin Blues is a very slow blues opening with an alto solo whereas Moanin’ features the baritone sax with a well-known bass line. This song was later also recorded with the Mingus Big Band.

The concept of this album, for Mingus, was to record songs he listened to before he heard Charlie Parker for the first time, hence the title “Pre-Bird”.

He uses a rare technique (mentioned before on Mingus at the Bohemia) to simultaneously combine two songs.

The opening track is a combination of “Take the A-Train” (left channel) and “Exactly like you” (right channel) and, in another tune, Mingus pairs “Do Nothing Til You Hear From Me” with “I Let A Song Go Out Of My Heart”.

The remaining tracks are originals by Charles Mingus, with Eclipse and Weird Nightmare featuring the singer Lorraine Cousins.

“Half-Mast Inhibitions” is the longest composition on the album and features 22-person ensemble. Directed by Gunther Schuller it contains a lot of classical elements that are reminiscent of Maurice Ravel and Claude Debussy.

Jazz critique Leonard Feather states that this Third Stream composition “shows more than any other Mingus title the great genius of the man as band leader, author and composer”.

The Black Saint and the Sinner Lady (Impulse, 1963)

“Black Saint is Charles Mingus’ masterpiece“ writes the Penguin Guide to jazz and it certainly is one of the most acclaimed jazz albums in history.

On par with “Mingus Ah-Um” it is undoubtedly Mingus’ most celebrated work.

Originally Mingus wanted to write a full album of ballet music, which is reflected in its titles. The tunes are all very orchestral and through composed with a big classical influence as well as some similarities to Duke Ellington’s work.

In fact, Mingus describes his album as: “ethnic folk-dance music” and once stated: “Throw away all of my records with this exception.”

Some of this album was recorded during the same session for Black Saint & The Sinner Lady, with Bob Hammer doing arrangements on both.

Better Get Hit In Yo’ Soul (previously on Mingus Ah Um) reflects once again Mingus early encounters with Gospel music. Here Mingus himself encourages his musicians with shouts and the band plays with enormous intensity.

After encountering health issues in the mid 1960s, Mingus had to step back and even take a break from playing for some time.

It wasn’t until 1974 that he started a new quintet with his longtime collaborator Dannie Richmond on drums, Don Pullen on piano, George Adams on tenor sax and Jack Wallrath on trumpet.

They released two albums, “Changes One” & “Changes Two” for Atlantic Records in 1975 that were praised by the critics and marked his successful comeback.

His famous ballad “Duke Ellington’s Sound of Love” was Mingus’ obituary to his longtime idol who passed away shortly before. The song contains literal quotations of Ellington’s tunes “Lush Life”, “Blues in Black, Brown and Beige” and “Take the A-Train”.

“Remember Rockefeller at Attica” is another political title such as “Fables of Faubus” which is quoted. It refers to a prison riot in New York in 1971 where Governor Nelson Rockefeller ordered to storm the prison, which lead to 39 dead people.

Devil Blues is co-written with saxophonist George Adams and has, once again, its roots in Gospel & Blues music, with Adams taking in the role of a traditional Blues ‘shouter’. 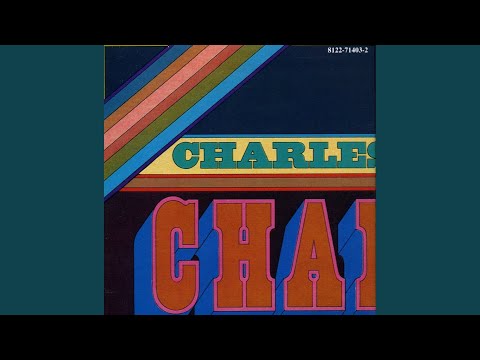 In the mid 1970s Charles Mingus developed amyotrophic lateral sclerosis (ALS), which made it impossible for him to play the double bass. Despite that, he continued composing and, in 1978, started working on a new album with singer-songwriter Joni Mitchell.

The four new compositions have lyrics written by Joni herself, following a meeting in Mingus’ apartment in New York’s Manhattan Plaza.

During the songs you can hear Mingus talking or “rapping”.

The music is experimental and pensive at once, with typically quirky Mingus effects throughout, including the howling on “The Wolf that lives with Lindsey.”

The band was selected by Joni Mitchell who had worked with them before: Jaco Pastorius on bass, Wayne Shorter on soprano sax, Peter Erskine on drums, Herbie Hancock on electric piano, Don Alias on congas & Emil Richards on percussion.

During a trip to treat his illness, Charles Mingus died on January 5th, in Cuernavaca, Mexico at age 56. The album was released after his death under Joni Mitchell’s name, fully dedicated to Mingus.

Charles Mingus’ legacy lives on in several bands managed by his wife Sue Mingus: The Mingus Big Band, Mingus Dynasty and Orchestra. The bands are touring worldwide and from 2008-2020 the Mingus Big Band played every Monday at the now-closed Jazz Standard in New York City.

You can discover more about the life and legacy of Charles Mingus via his website and, if you’re looking for more great music, check out our round up of some of the best jazz bass players in history. 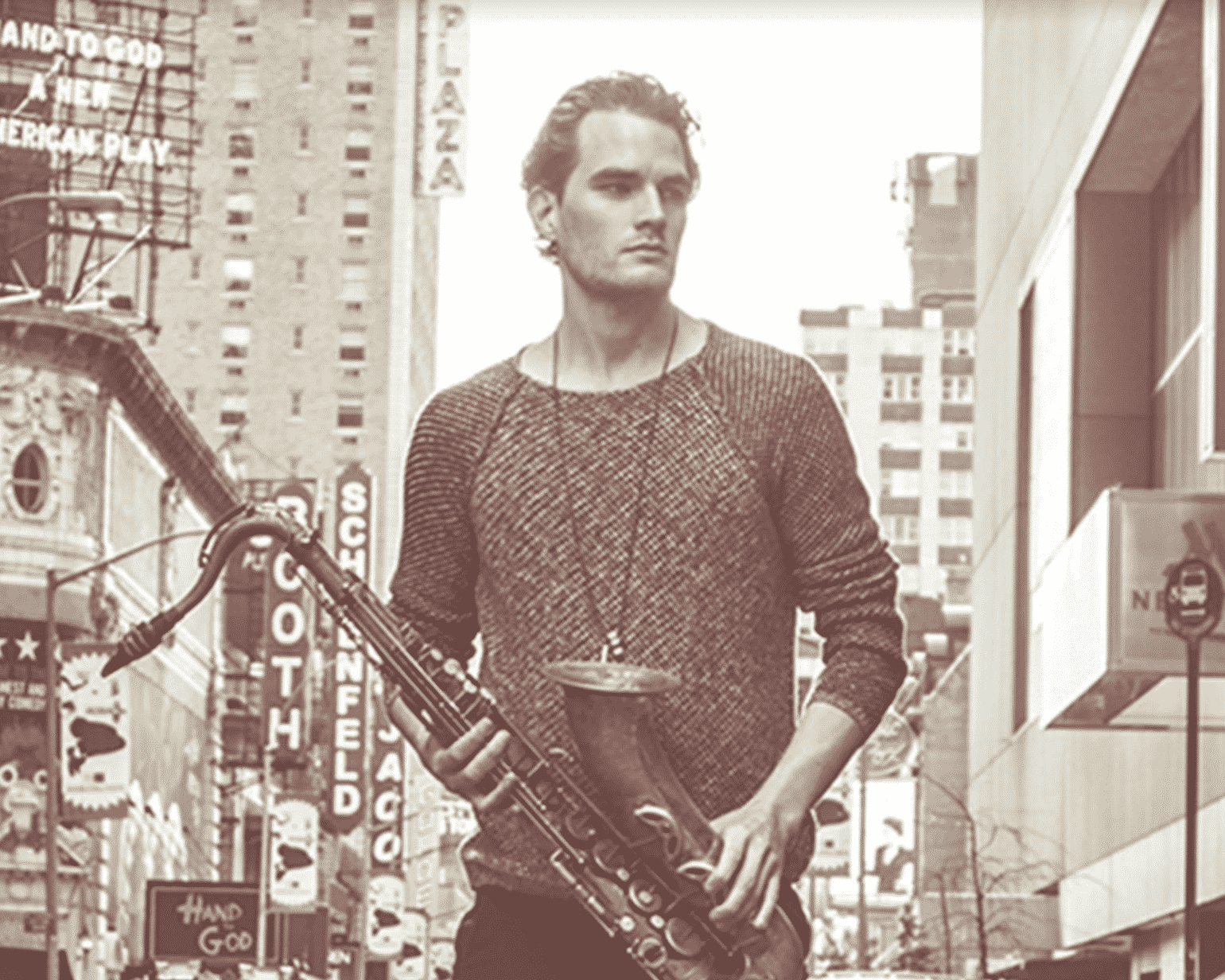 Tobias Meinhart is an award-winning saxophonist and composer based in Brooklyn, NY. Born in a small village in rural Bavaria, Germany, Tobias Meinhart has spent the last 15 years carving out a career in the international jazz scene. He performs regularly at New York’s most prestigious jazz clubs (Blue Note, Smalls and Birdland) and tours internationally with his own band.