10 of the Best Music Schools for Jazz in the USA 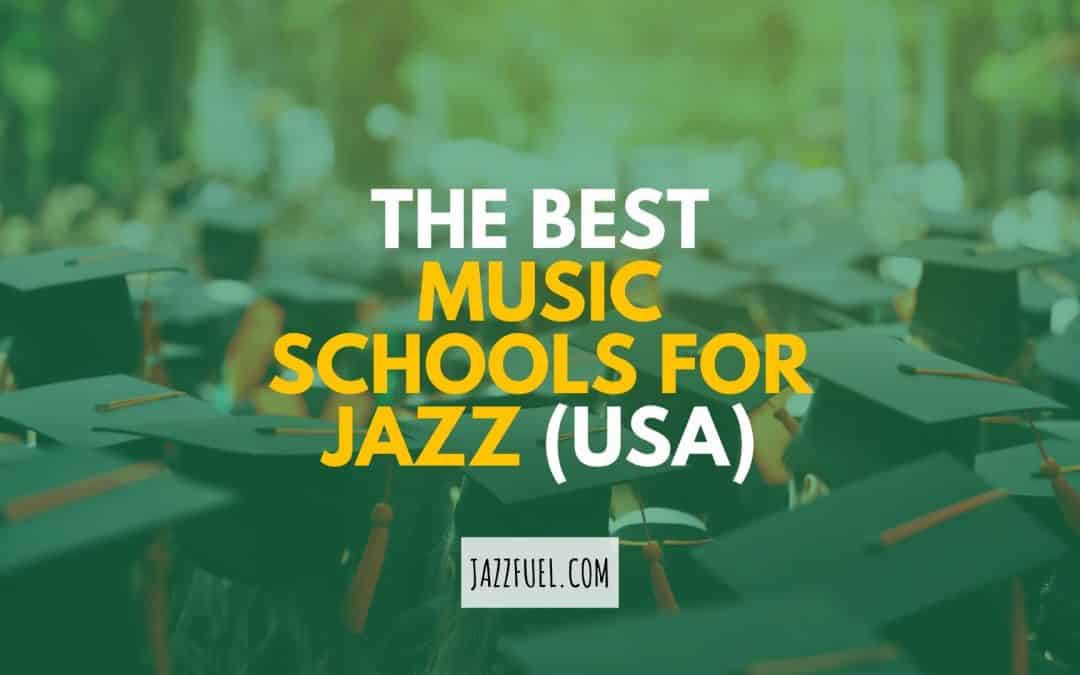 Studying jazz at one of the many great music schools in the USA is something that many aspiring jazz musicians consider as they start along the road to becoming a professional musician. In this article, we’ll offer our ten top picks.

Many music colleges in the USA also offer the opportunity to study with well-known musicians in the music industry, so its well worth checking out the faculty members and notable alumni before applying.

A music school’s reputation and ability to provide opportunities to start building a career before graduating is also impactful – alumni who have gone on to achieve success in the performing arts are often a sign of a good quality music school.

There is also a difference in overall experience between going to a conservatoire (or conservatory) and a university that has a jazz degree program – this is definitely worth considering too.

Two unavoidable aspects of studying at top music schools in the USA are competition and cost.

Many of these courses are highly sought after, with rigorous audition processes and tuition fees alone that can be in the region 40-50,000 dollars per year (not to mention living costs, which can be exceedingly high in places like New York).

Overcoming these potential barriers can require a lot of hard work and drive, and perhaps a little luck too, but it is by no means impossible with dedicated practice and a willingness to research funding options.

There are a lot of great jazz schools offering excellent bachelor’s degree, master’s degree and doctoral degree courses, but here are just ten that are particularly well known and have a strong track record.

Manhattan School’s Jazz Arts program is one of the best known and most prestigious in the world, and an excellent choice for obtaining a bachelor’s degree in jazz.

True for the Manhattan School and pretty much any other New York school, there is huge appeal in being right in the midst of such a fabled city for jazz, and the opportunities to get connected into the scene is appealing to any budding jazz music student.

This high-level undergraduate degree program in New York is offered by the School of Jazz at The New School, a leading university in the US.

The New School is particularly well-known thanks to the impact of its alumni in modern jazz. Brad Mehldau is an alumnus, along with Jazzmeia Horn, Peter Bernstein, Larry Goldings, Avishai Cohen, Keyon Harrold, Gilad Hekselman, Becca Stevens and Marcus Strickland to name just a few.

The School of Jazz also has excellent links to the music industry and is right on the doorstep of Greenwich Village, famous as a jazz hub. The Village is the home of clubs like The Village Vanguard, Smalls and The Blue Note clubs.

The music program has a reputation for being a little more forward-looking in its music education than other music schools in the USA, which may be attractive to those who are interested in modern jazz, contemporary styles and interdisciplinary collaboration.

Where the aforementioned New School has associations with modern jazz, the first word to spring to mind when thinking about jazz at Juilliard is “tradition”.

This may be unsurprising given that the jazz course is headed up by Wynton Marsalis and Juilliard’s position as possibly the world’s most prestigious classical music institution.

Many of the jazz faculty members are familiar names in the straight-ahead jazz world: Joe Magnarelli, Kenny Washington, Geoff Keezer, Billy Drummond, Ted Rosenthal, Gerald Cannon, and so on.

Don’t assume, however, that Juilliard is backward-looking.

A quick look at some alumni reveals plenty of musicians that are synonymous with modern jazz in their respective times: Chick Corea, Bob Berg, Christian McBride, Eddie Gomez and Michel Camilo are some examples.

Juilliard places significant importance on excellence and technical accomplishment, even requiring a music performance of prescribed classical works in the jazz audition process.

Competition is very fierce, with about 7-9 undergraduate jazz students accepted per year.

New England Conservatory is notable not only for its jazz music program but also for having a strong contemporary improvisation major which focuses on less traditional forms of improvisation.

The music program includes elements of contemporary classical music and a host of other influences.

The jazz department also reflects this, with many of their faculty members being involved with the “freer” end of the jazz spectrum.

Boston is smaller and less frenetic than New York, but still has plenty of top artists coming through town to various venues, including NEC’s own concert hall.

Just a short walk up the road from New England Conservatory lies possibly the most famous contemporary popular music college in the world, Berklee College of Music.

Expanding massively from its jazz roots, it now encompasses most popular contemporary music, and also offers a real range of majors including music production and engineering, music business, music therapy, and film scoring to name a few.

Jazz is still at the heart of the music college, forming the basis of the core curriculum for all majors, and it produces a pretty steady flow of top names.

Berklee may suit those who want to be part of a diverse and international musical community and to have a wide and flexible range of options in their music degree.

Unlike courses that will only accept a student who is relatively advanced in their musical development, Berklee’s size and resources allow it to offer places to some who are a little earlier in their development. Many alumni have gone on to flourish thanks to this opportunity.

Think of jazz at the University of North Texas and the world-renowned One O’Clock Lab Band immediately springs to mind.

The ensemble is the most advanced of nine ensembles that form the backbone of the jazz music major.

The emphasis on jazz tradition and ensemble playing are clear – this makes sense when you consider that UNT was the first university in the US to have a jazz music degree.

Members of the One O’Clock Lab Band record and tour every year and there are opportunities to write for the band as well.

The University of North Texas is also known for being the birthplace of Snarky Puppy, so it is worth pointing out that

Texas is rather different in climate and in culture to the places mentioned so far, though UNT is in Denton – a city in the Dallas metropolitan area, and Dallas diverges somewhat from the very conservative image of Texas as a whole.

The Jazz Studies department at the University of South California in Thornton is headed up by Bob Mintzer.

He says that the main thrust of the bachelor course is to develop well-rounded musicians in music performance, music theory, arranging and teaching. He also acknowledges the importance of having the necessary recording, music production and marketing skills for today’s industry.

Some of the best west coast jazz musicians can be found in the faculty of USC: Russell Ferrante, Peter Erskine, Bob Sheppard, Alan Pasqua and Vince Mendoza all spring to mind, as well as Bob Mintzer himself.

The course itself is actually quite venerable and has an excellent reputation.

LA is, of course, a large and iconic city for all sorts of reasons, which may appeal to some and not so much to others – though, as Mintzer notes, “the weather ain’t too bad, either!”.

Eastman is another school with a strong classical reputation, but its jazz course is excellent too.

With the likes of Bill Dobbins, Gary Versace and Charles Pillow on the faculty and alumni include Ron Carter, Maria Schneider, Steve Gadd, Joe Locke and Chuck Mangione, ESM is an excellent conservatory for jazz.

One thing to be aware of is that Rochester (where Eastman is located) is in upstate New York – which means it is some distance from New York City – Boston is actually closer.

Rochester sits on the southern shore of Lake Ontario, not too far from Niagra Falls, with Toronto on the northern side of the lake.

Rochester is not a huge city, so those who prefer less hustle and bustle may find that attractive.

It is worth noting, however, that Rochester is home to one of the biggest international jazz festivals in the US every June, with many links to the jazz course at Eastman.

The jazz course at the University of Miami’s Frost School of Music may not be as famous as some on this list, but it is highly regarded.

It’s worth noting that the course is called Studio Music and Jazz, and this makes sense considering that the faculty consists not just of excellent jazz musicians, but have a wealth of experience in studio settings, touring bands and ensembles.

Alumni include Mark Egan and Danny Gottlieb (both best known for their work with Pat Metheney, who was also there for a week before being offered a teaching job at Berklee). Bobby Watson is also an alumnus, along with Jonathan Kreisberg, Rick Margitza, and Maria Schneider.

Oberlin conservatory may be familiar to some jazz fans due to Dave Brubeck’s live album that was recorded there in 1953 “Jazz at Oberlin“.

While there are a couple of well-known jazz musicians who went to Oberlin earlier in the 20th century (pianists Al Haig and Stanley Cowell), it is better known for classical music education- majoring in jazz there only became possible in 1989.

However, the Jazz Studies Division at the music college has a good reputation, and some well known musicians on the faculty – Gary Bartz, Billy Hart, Jay Ashby, Eddie Henderson, Gerald Cannon and Dan Wall are a few. Alumni include Sullivan Fortner, Jenny Scheinman, Theo Croker and Peter Evans.

Oberlin sits just outside of Cleveland, Ohio, and unlike the other places on this list, is not right in the middle of a city. The campus is pretty nice, and may suit those who want that kind of college experience, and to avoid too much hustle and bustle.

We hope you enjoyed this top ten list of music schools in the USA.

Head over to our Discover Section to learn and discover more about jazz, from the best jazz records of all time to some of the greatest clubs and festivals in the world.