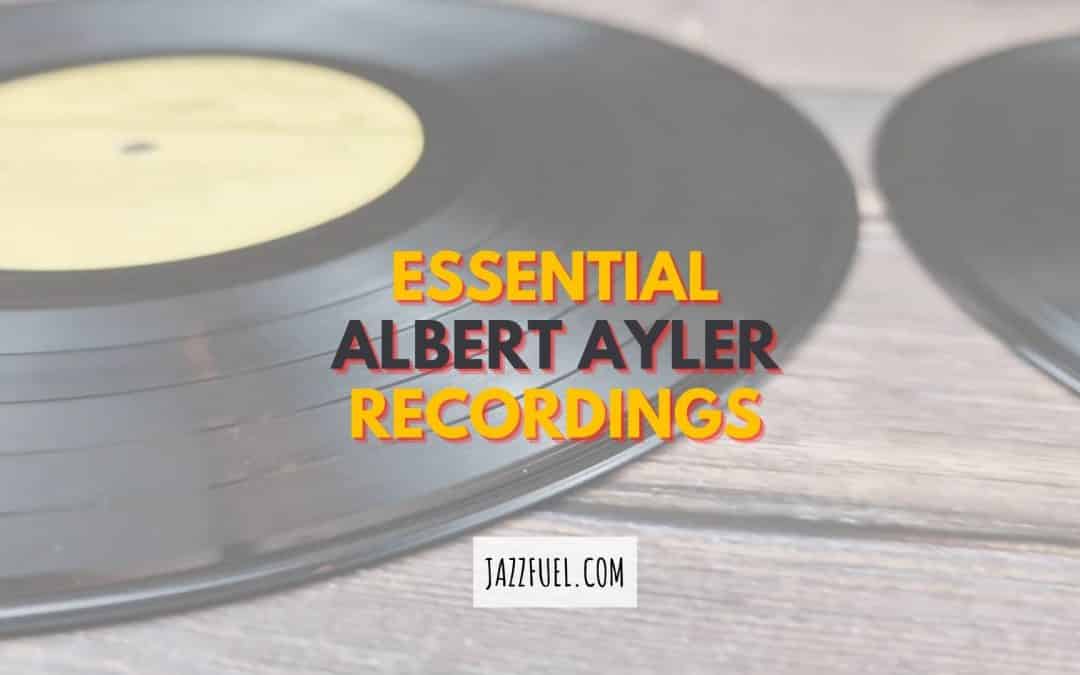 American saxophonist Albert Ayler remains in many respects as mysterious and as divisive a figure as any jazz musician throughout its history.

In this article we trace his career through some of his iconic albums.

For some, along with the likes of Pharoah Sanders and Ornette Coleman, he is one of the pioneers of a 1960s avant-garde movement known as Free Jazz and father of a style called Spiritual Jazz.

For others (like the BBC producer who famously destroyed a taped broadcast Ayler gave in London!) he is a complete charlatan unworthy of any musical consideration.

The recordings on which we base our understanding of this man’s work span a mere eight years. Although it sounds like a brief period of time, consider that the essential recorded works of the legendary American saxophonist Charlie Parker span a similar period (1945-53).

Born in Cleveland, Ohio in 1936, Ayler’s musical education followed along traditional lines, including a period of study at the Academy of Music in Cleveland.

His early exposure to music also involved, like many Black American musicians of that era, time spent performing at church services. This influence in particular with its gospel and spiritual aspects was to bear much fruit for the mature Ayler.

Describing Ayler’s approach to the saxophone and music is not simple.

In general terms, whilst saxophonists like John Coltrane and Sonny Rollins developed a style that utilized harmonic innovation, Ayler’s preoccupation was with sound and timbre manipulation as an end in itself.

With, at times, an extremely broad vibrato, over-blowing the instrument, use of an extreme altissimo range on the tenor saxophone, along with guttural utterances that call to mind the ‘speaking in tongues’ so prevalent in the church traditions.

Although there are some sophisticated aspects to Ayler’s music making he, for the main part, embraced a primitive, almost primordial approach to his art.

This very much chimed with the age he lived in.

The 1960s was the age of experimentation and free self-expression. In this regard, Ayler’s music should be seen as representative of a very particular era.

After a stint in Europe with the US Army, Ayler was domiciled in Scandinavia by 1963, where he made his first recordings.

My Name Is Albert Ayler

Recorded in Denmark in January 1963, this Albert Ayler album features the leader on both tenor and soprano saxophones with a conventionally inclined rhythm section performing a number of jazz standards.

Although the choice of material is suggestive of a traditional approach, the results for Ayler at least are anything but traditional. Clearly, the rhythm section was unprepared for the avant-garde approach Ayler takes to the material.

Even though this recording is in many respects a complete mis-match and ill thought through, it does allow the listener an opportunity to hear exactly what shocked fellow musicians and audiences when first hearing Ayler.

Listen to the recording of “Summertime” that still has a raw incendiary power and shock of the new.

Relocating back to the USA, Albert Ayler embarked on a series of recording sessions in 1964 that remain definitive of his art to this day.

Performing alongside musicians such as drummer Sonny Murray and bassists Gary Peacock and Henry Grimes (for this session the latter) he has found colleagues who are completely in simpatico with his musical sensitivities.

The absence of piano here suggests what little extent chord progressions play in this music.

What we have in its place is continual melodic variation and motivic development after the statement of a simple fanfare type theme.

The addition to the front line of Norman Howard on trumpet suggests that the model of Ornette Coleman’s sans piano groundbreaking quartet was an influence.

This album is an altogether magnificent example of Ayler as band leader and soloist.

Listen here to “Holy Holy” where the implied pulse (extremely fast) has replaced a steady played beat as expression of the tempo of the music.

Recorded in July 1964, this trio album featuring Gary Peacock and Sonny Murray alongside Albert is a bona fide classic of the free jazz era.

This was a short lived working trio of the period and very much continues in the spirit of the previous recording, albeit with even stronger contributions from all involved.

Once again, simple folk-like melodies book-end a torrent of spontaneous free improvising and group interplay. This is very much collective improvising, not soloist with accompaniment. One can’t really single out any player here.

Three superb players literally at the top of their game.

Bassist Gary Peacock famously turned down more prestigious and financially rewarding working opportunities with the likes of Miles Davis et al to fulfil this job, so highly did he esteem Albert’s playing.

A classic recording that launched the short-lived ESP NYC-based record label. It remains indispensable listening for anyone interested in Ayler’s music.

Listen here to “The Wizard” – music-making that made even established masters like John Coltrane sit up and take notice.

This album was recorded as part of a European tour undertaken by the Albert Ayler Spiritual Unity Trio in 1964, which became a quartet with the addition of trumpeter Don Cherry.

There are several recordings documenting this group on tour (The Copenhagen Tapes amongst them), all released posthumously. This particular release saw the light of day in 1980, ten years after the death of Ayler.

Hilversum was a Dutch radio station and this session was recorded at their studios, but to all intents and purposes this is a live album.

The addition of the trumpet playing of Don Cherry to the trio is one of the many things that make these recordings so outstanding.

As noted by Ayler biographer Jeff Schwartz, “there is a much greater sense of ensemble and textural variety in this group than in prior Ayler aggregations.”

The quartet runs the gamut of styles ranging from the sounds of marching bands, spirituals and dirges, to those of traditional and avant-garde jazz.

This is yet another magnificent 1964 Albert Ayler album released by the ESP label.

The particular beauty of this session lies in the utilisation of a larger ensemble (a sextet) featuring some of the very best musicians of this era, associated with the style known as ‘Free Jazz’.

So, alongside the ubiquitous Peacock, Murray and Cherry, we hear the likes of John Tchicai and Rosewell Rudd. The variety of instrumental colour and approaches to free spontaneous improvising makes for a wonderfully contrasted session.

This session was set up to supply a soundtrack for an avant-garde film with no spoken dialogue, just the recorded ensemble.

It amounted to a totally improvised jam session with no preconceived melodies, albeit side two of the recording starts off with Ayler stating the melody of ‘Ghosts‘.

There is a somewhat more subdued air to this recording in contrast to other more exultant, high energy releases Ayler had been involved with in 1964.

This release from 1965 marks one of the few occasions Albert Ayler appears as a side-man on another artist’s recording, namely drummer, Sonny Murray.

The compositions of Murray (such as they are) and presence of two bassists in the ensemble adds a layer of subdued ominous darkness that makes this session quite distinct from others of this period.

The wonderful lyricism of Don Cherry is another stand-out from this recording.

Throughout his association with Ayler, Cherry was able to act at times as a contained contrast to the more extroverted and exalted nature of Ayler’s approach.

This session provides many wonderful examples of these two musicians working in tandem. Listen to “Virtue” which showcases the group magnificently.

This 1966 live recording (released in 1967) on the Impulse label showcases a completely different band than the 1964 edition.

A wonderfully constructed group which utilizes a string section comprising bowed cello, violin and, at times, three bassists alongside the horn of Ayler.

The composition “For John Coltrane” featuring the rarely heard alto saxophone of Ayler takes on a modern chamber music approach in its elegiac ballad like tones.

There is a grandeur to performances like “The Truth is Marching in” with its old time religious revivalist fervour.

The contrast is the horns letting loose with furious improvising before once again stating the simple fanfare type theme. The tribute to Coltrane, however, remains the stand out track.

This superb concert recording from France in 1970, marks one of the last opportunities to hear Ayler prior to his death later that same year.

Most definitely major changes had occurred to the saxophonist’s approach from 1964 to this present recording.

Featuring Ayler for the most part, accompanied by the traditional jazz rhythm section of piano, bass and drums.

The music manages to simultaneously combine tonal harmonic piano playing alongside a furious textural approach by Albert. Another aspect of the music here is a more prominent R&B approach.

Whilst it might be easy to see this as a kind of popular nod to an audience more entranced by rock and blues, these aspects were always present or latent in Ayler’s music making, just not as heavily emphasised as they are here.

Having Call Cobbs on piano on a number like “The Truth is Marching In”, whilst Ayler erupts into frenzied free improvisation, shows one way of reintroducing an instrument which was so often excluded from avant-garde ensembles.

It almost seems like these live sessions represent an artist who in a short period of time (eight years) had considered all the possibilities inherent in his art and had reached a refined statement of them which he could communicate to an audience.

These choices included above are, of course, highly subjective and are intended primarily to encourage you the listener to a deeper exploration of Albert Ayler’s discography.

Summing up, the influence of Ayler is most definitely a profound one in the music we call ‘Jazz’ both from a purely saxophone-oriented point of view and also in collective ensembles terms.

Like another master of the 1960s avant-garde, Ornette Coleman, Ayler continues to exert an influence on how jazz is approached and played to this day, irrespective of style.