Saxophone History | From Adolphe Sax To The Modern Instrument 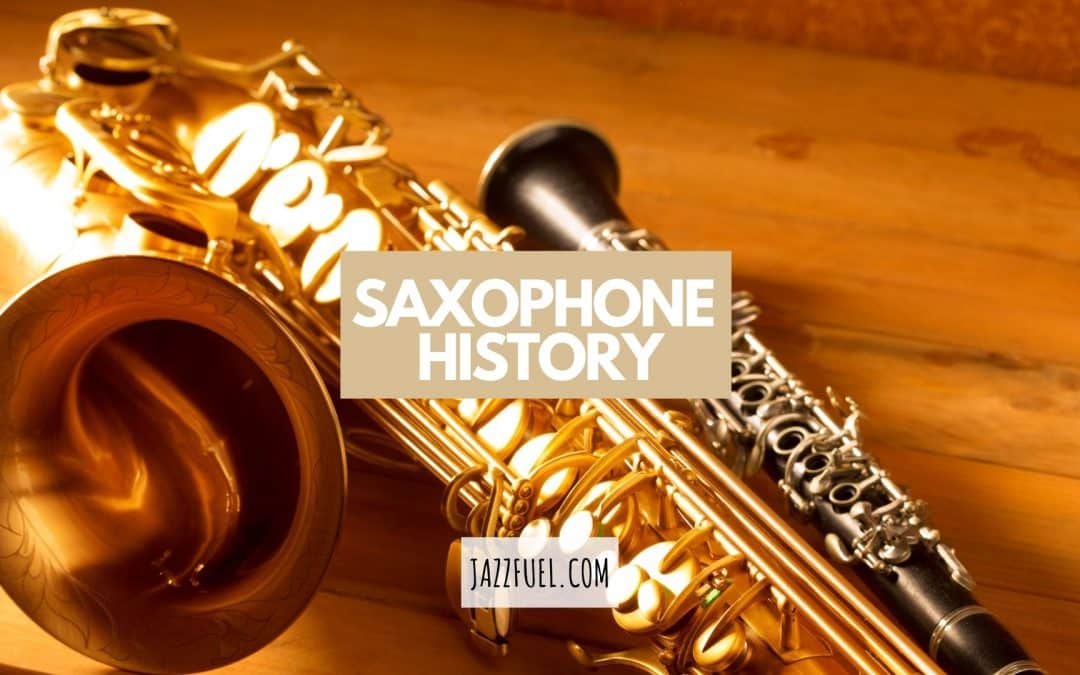 Whilst originally conceived as an orchestral instrument, the history of the saxophone is firmly linked to many of the key developments in jazz.

In this article we’re going to take a look at the saxophone‘s early days, it’s different uses, its design and set-up, and some of the key players and manufacturers that played their part in its rise to fame.

From Sidney Bechet’s wailing soprano sax in the early days of New Orleans jazz, to the spiritually charged modal jazz of John Coltrane’s tenor-led quartet, via Charlie Parker’s bebop alto and Ornette Coleman’s revolutionary free jazz: many of jazz’s biggest characters have been saxophonists, and the instrument is deeply associated with the genre.

However, that hasn’t always been the case.

In fact, the saxophone was originally conceived of as an orchestral instrument.

And, of course, saxes have also been used in classical chamber music, military bands, pop, funk, Motown and ska bands.

So, without further ado, let’s take a look at some saxophone history and how these hugely versatile and expressive instruments developed from their origins in 19th Century France, to their massive role in the most of the major movements in jazz.

Adolphe Sax and the Invention of the Saxophone

The son of an esteemed maker of musical instruments, Adolphe Sax was a Belgian who would later relocate to Paris.

Sax sought to create an instrument that combined the technical dexterity of the flute and clarinet, with the horn-like sound of the brass family; it was whilst experimenting with modifications to the bass clarinet that he stumbled across a prototype version of the saxophone.

This early goal explains a common confusion around the saxophone…

“It’s a woodwind instrument, but it’s made from brass?!”

That may be true but in terms of sound production (which, let’s face it, is a pretty important part of any instrument!) it has a wooden reed which is most comparable to a clarinet.

Originally, the saxophone was conceived as a revolutionary new member of the orchestra and, initially, a number of major classical composers lent their support by writing orchestral pieces to feature the instrument.

Hector Berlioz, in particular, was an early advocate.

Although the saxophone never became a standard part of the orchestral lineup, orchestras will often draft in saxophone specialists in order to play pieces like Maurice Ravel’s Boléro or Leonard Bernstein’s Symphonic Dances from West Side Story, which utilise the instrument amongst the ensemble.

A school of classical saxophone playing was established which still exists today.

There is a a wide body of solo and chamber works written for classical sax, with the saxophone quartet (typically comprising soprano, alto, tenor and baritone) a particularly popular example of the genre.

As with any musical instrument, the players that popularise it only tell half the story.

The instrument maker, improving and refining the technical side things, often play an important role in the advancing techniques and sound quality.

Compared to today, the early saxophone keywork was extremely cumbersome, tuning was tricky and the sound was inconsistent across the range of the instrument.

Whilst there are various excellent saxophone brands available today, one – Selmer Paris – stands out head-and-shoulders above the rest for its consistent role at the forefront of jazz history.

Listen to a handful of the most famous jazz albums of all time and chances are you’ll hear a Selmer.

From their beginnings in 1885 (less than 40 years after the sax was first patented) Selmer saxophones have been moving in-step with some of the greatest players of the day.

Today, the most commonly played saxophones are the soprano, alto, tenor and baritone saxophones.

However, Adolphe Sax’s original patents conceived of 14 members of the family, including some pitched in C (concert pitch, like the piano, flute or violin) and some in F.

It was the E flat and B flat saxes that caught on, though: those are the ones that are scored for by composers and arrangers writing for all the major types of ensemble that include saxophones, and it is these that are sold by all of the well known manufacturers.

One exception, at least for a time, was the C melody sax.

These concert pitch saxophones, which sound higher than a tenor but lower than an alto saxophone, were popular parlour instruments in the early part of the 20th Century.

However, sales dropped off as the 1929 Wall Street Crash hit, and the start of the big band craze in the early ‘30s meant that altos and tenors were now the order of the day, so C melodies are now rarely seen.

The Saxophone in Jazz

In the early days of jazz, when the music’s epicentre was first New Orleans and then Chicago, the saxophone’s role was not as prominent as it would later become.

Trumpets tended to lead the band, typically flanked by clarinet and trombone on the frontline, and there are no saxes in sight on Louis Armstrong’s seminal Hot Five and Hot Seven recordings, which are perhaps the greatest achievement in 1920s jazz.

There were, however, some exceptions to this.

Sidney Bechet’s virtuosic, vibrato-laden soprano sax is one of the most instantly-recognisable sounds in jazz, and the New Orleans man was one of the first great improvising soloists.

Things changed when Coleman Hawkins turned the tenor saxophone into a jazz instrument during the 1920s, as he emerged as a star soloist with Fletcher Henderson’s band.

Johnny Hodges and Ben Webster, two longtime Duke Ellington sidemen, and Lester Young, who first appeared with Count Basie’s band, were just some of the great saxophone players to come to prominence during the swing and big band era of the 1930s.

Since then, the saxophone has been at the forefront of most movements and innovations within jazz.

Meanwhile, players associated with the Cool jazz scene – Stan Getz, Lee Konitz and Gerry Mulligan amongst them – improvised in a relaxed fashion that was inspired with the swing stylings of Lester Young.

The saxophone’s ability to blow up an ultra-expressive storm was put on display in the late 1950s and ‘60s.

John Coltrane’s classic quartet, fronted by the leader on tenor saxophone and sometimes soprano, made some of the most spiritually-charged and impassioned music ever recorded on albums like A Love Supreme and Impressions.

In the late 1960s Miles Davis helped usher in the jazz rock era by introducing electric keyboards, synthesizers and bass guitars to his bands.

Tenor and soprano saxophone player Wayne Shorter, previously a member of Art Blakey’s acoustic hard bop groups, was one of Davis’ key collaborators, and would soon go on to form the pioneering fusion group Weather Report.

Michael Brecker, another forward-thinking player with straight ahead credibility, fronted the funky fusion group the Brecker Brothers along with his brother, the trumpeter Randy Brecker.

During the 1960s and ‘70s some non-American players began to embrace improvising in ways that celebrated their own respective national identities.

For example, the Norwegian saxophonist Jan Garbarek, like many Scandanavian players, is influenced by Nordic folk music.

The saxophone’s versatility and the stylistic breadth of jazz is made clear when we hear the stark difference between his and Sidney Bechet’s wildly contrasting soprano sounds.

The Saxophone in Other Genres

Although the saxophone didn’t take off as an orchestral instrument, it was quickly adopted by the bands of the French military, and it remains a staple of military and concert bands across the world.

It is also used in Motown, funk and ska horn sections, and there was a time during the 1980s when every pop song seemed to have a short interlude in the form of a saxophone solo (Michael Brecker was particularly renowned for contributing these to hundreds of songs).

It also features in contemporary classical music and, as already mentioned, saxophones still appear in orchestras from time to time, when required for specific pieces.

Many of today’s most recognisable jazz musicians are saxophonists.

Most modern saxophone players play either the alto – Kenny Garrett, Miguel Zenon and Tia Fuller, for example – or tenor – such as Joshua Redman, Chris Potter and Melissa Aldana.

But a few notable names make prominent use of the baritone saxophone (Lisa Parrott, for example) or soprano (such as Dave Liebman, who also plays tenor).

It is now possible to study either classical or jazz saxophone at many of the world’s top conservatories (high level, specialist music colleges), so there is no shortage of talented young saxophonists appearing on the scene to continue the instrument’s rich legacy.