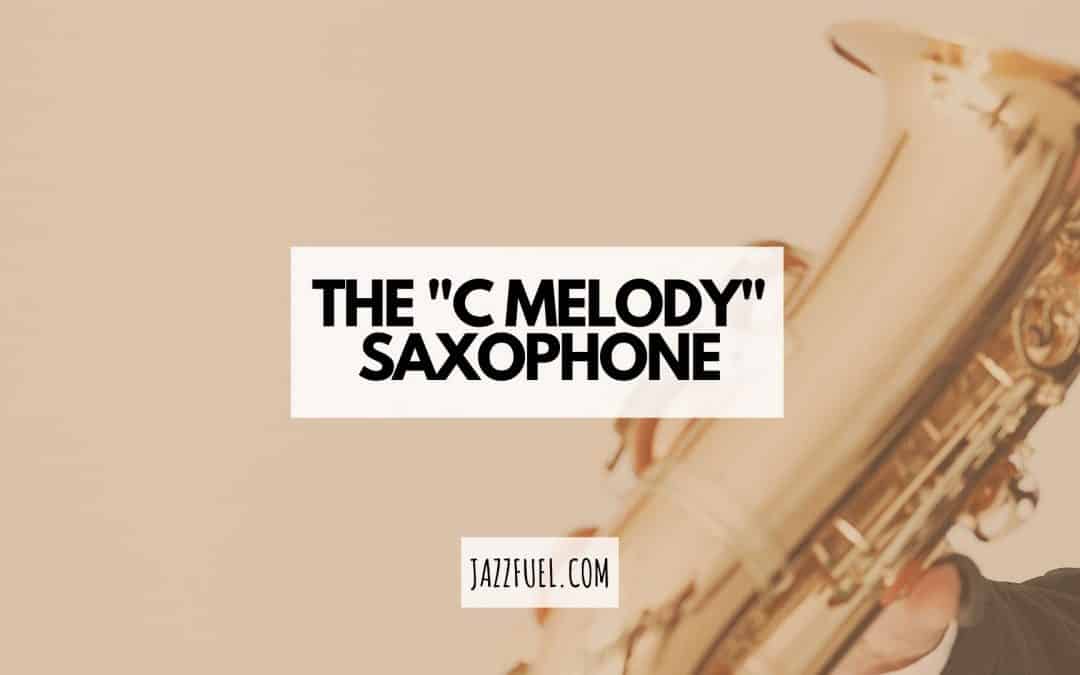 In this article we’re going to take a closer look at one of the most fascinating oddities of the saxophone family: the C Melody saxophone.

We’ll check out the few famous players who used this instrument and also explore some modern C Melody instruments that are available to buy online.

Unlike every other saxophone out there, the C Melody saxophone (which is bigger than an alto, but smaller than a tenor) plays in concert pitch.

This has some obvious practical advantages, such as being able to play from music written for piano, flute or violin without having to transpose.

But despite this, the instrument has all but fallen from usage since it’s heyday in the early years of the 20th Century.

That said, there are signs that it might be enjoying something of a mini revival, with new models being manufactured for the first time in many years.

So let’s take a look at the development of the C melody saxophone, its use in jazz and other styles of music, and at some key makes and models, both past and present. 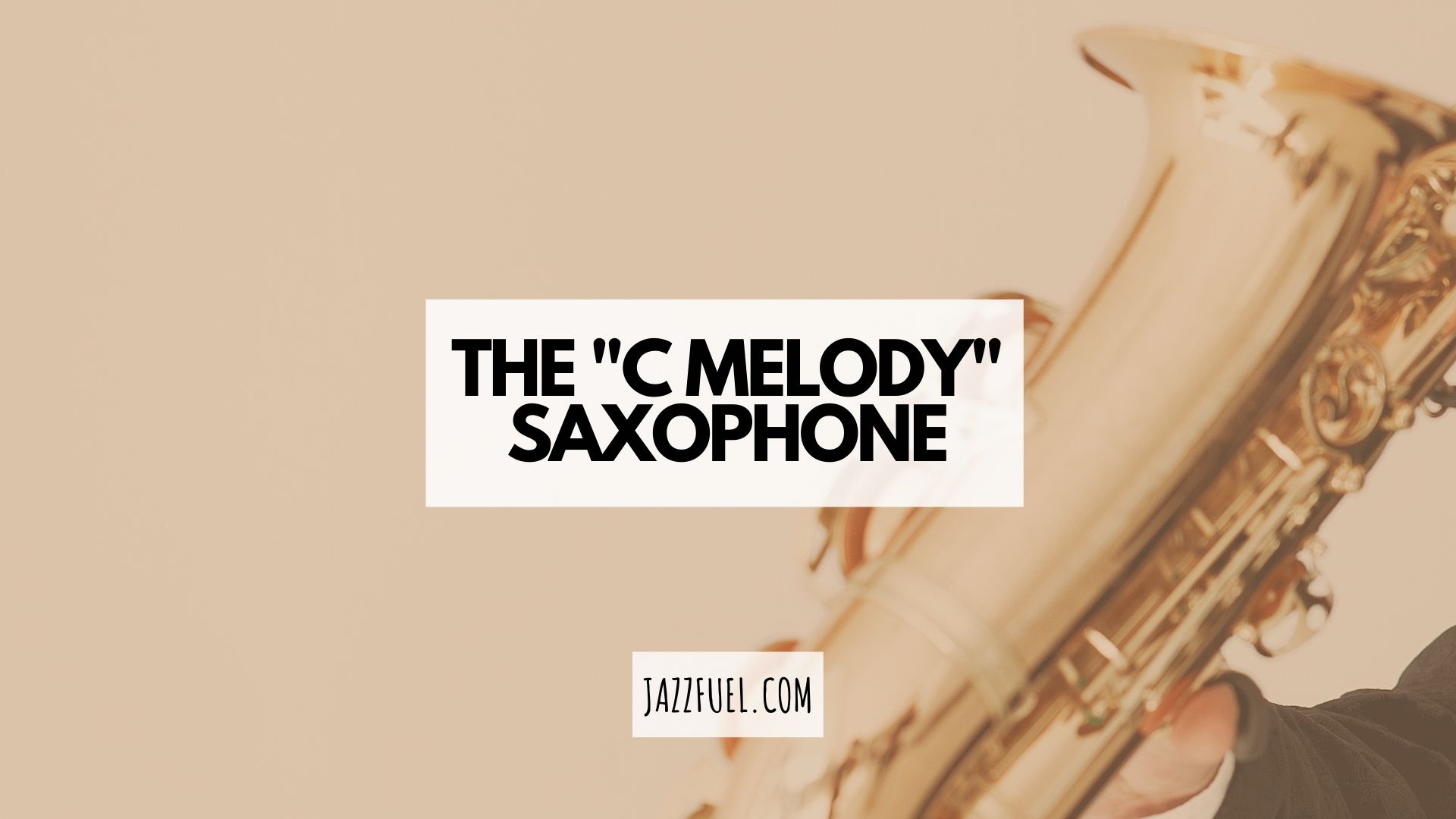 The History of the C Melody Saxophone

The C melody was conceptualised by Adolphe Sax along with the other members of the saxophone family when they were invented in the mid-19th Century.

But the C melody enjoyed its greatest period of popularity between 1914 and 1930, when it was produced extensively by the major saxophone manufacturers.

It was particularly popular with amateur musicians.

Noted for a more muffled, subdued tone than the alto or tenor, hobbyists could gather round the piano playing the popular hits of the day from that concert pitch sheet music that sold in droves during this period, with less chance of disturbing the neighbours.

But in 1929 the Wall Street Crash and subsequent economic recession had a drastic impact upon instrument sales.

Furthermore, the start of the big band era meant that if anyone did buy a saxophone, they were much likely to choose an alto or tenor, the instruments primarily making up the saxophone sections of famous big bands led by Duke Ellington, Tommy Dorsey and Artie Shaw.

The instrument faded from view and was barely seen during the bebop or hard bop eras, or for the rest of the 20th Century, for that matter.

But recently, a few manufacturers have seen a demand in the market for a saxophone in concert pitch, and have started producing brand new C melodies, and it is now not uncommon to see top players making occasional appearances with vintage models of the instrument.

An American of German descent, Rudy Wiedoeft helped to popularise the C melody saxophone during the 1910s and ‘20s.

A stunning technician, his tonguing ability is particularly impressive. Often veering into novelty territory on a series of records called things like “Saxophobia”, “Saxema” and “Sax-o-Phun”, he makes use of entertaining extended techniques such as laughing effects and slap-tonguing.

Frankie Trumbauer is best remembered for his collaborations with the Dixieland cornetist Bix Beiderbecke, with whom he made some of the most important early jazz recordings of the 1920s.

He plays a landmark solo on “Singin’ The Blues”, while “Trumbology” shows off his virtuosic side. His sweet, lyrical playing was a major influence upon the tenor style of Lester Young.

It’s rare nowadays to find a professional saxophonist who considers the C melody their primary instrument, but there are a few prominent alto and tenor players who have dabbled with it.

Joe Lovano and Anthony Braxton have appeared with C melodies on occasion, while Dave Pietro, a New York-based member of Maria Schneider’s Grammy-winning orchestra, has made a number of small group albums on which he plays the instrument, generally alongside alto and soprano saxophones.

Scott Robinson, a multi-instrumentalist of incredible range and breadth, who has played almost every saxophone-related instrument imaginable (and more!), made an album in 2000 on which he plays the C melody exclusively.

Melody From The Sky showcases the instrument’s versatility, with repertoire including 1920s standards, soul jazz-style organ quartet and a gorgeous rendition of “The Swan” from Saint-Saens’ Carnival of the Animals.

“I quickly discovered… that the instrument had a plaintive, yearning quality unique among saxophones – a sound full of hope, yet touched with a kind of loneliness and mystery.

It was a sound I would turn to again and again through the years to evoke that special feeling that only comes when I am playing the C-melody saxophone.” – Scott Robinson

Most professionals who play the C melody will opt for vintage models.

During the instrument’s glory years between 1914 and 1930, they were produced by high-end manufacturers including Conn, Buescher, King, Martin and Selmer Paris.

Although alto and tenor saxophones made during this era (especially those made by Conn and Selmer) are highly sought after for their tonal quality, vintage C melodies are available more cheaply, simply due to the instrument being less widely-played.

However, it’s worth noting that the quality and condition of these vintage instruments can vary, and the tuning and ergonomics will feel quite different to a modern horn, so inexperienced players should exercise caution before parting with their money.

Trying out a vintage instrument is the best way to decide if it’s right for you, but if you’re looking to buy a C Melody saxophone online, Ebay have a good selection here.

If you like the idea of a concert pitch saxophone but would prefer the intonation and more familiar ergonomics of a modern horn, there are a few models currently available.

These are all student or intermediate level instruments at the moment, as no manufacturer is producing professional-standard C melodies.

But the good news is that none of these models will break the bank, at least compared to many other saxophones on the market!

It was practically impossible to obtain a modern C melody saxophone until 2007, when the New Zealand company Aquilasax began making these well-reviewed saxophones.

Sadly, production ceased in 2015, but they can still be found second hand online.

Sakkusu is the in-house brand by one of the UK’s premier saxophone retailers.

Their line of solid budget horns now includes a C melody sax, which boasts consistent tuning and tone quality over the whole range, and a distinctive-looking microtuner on the neck, so that the player can attain the optimal mouthpiece position.

Thomann, a German company, is one of Europe’s biggest suppliers of musical instruments and they have produced their own C melody saxophone, the CMS-600 L.

This affordably priced offering is available in traditional gold lacquer or with silver plating.

The issue of which mouthpiece to use has often provided the modern player with something of a conundrum.

Dedicated C melody mouthpieces were made during the instrument’s heyday but, even if you manage to track down one of these in good condition, it will probably feel rather stuffy and more than a little odd.

Some players have used modified tenor mouthpieces, while others have found that alto sax mouthpieces work well.

C melody novices will probably want to experiment with different combinations: they may find that they experience quite different results due to various factors relating to the saxophone and mouthpiece.

There are now, however, a few brand-new, dedicated C melody mouthpieces on the market, which is perhaps testament to the instrument’s increase in popularity in recent years.

This ebonite piece is not cheap, but it is expertly designed and has received some rave reviews. It also comes with a Rovner Light ligature and mouthpiece cap, and has a 10-day trial period if purchased directly from the Morgan website.

Dutch saxophonist Ben van Gelder, normally an alto saxophonist, plays an unaccompanied chorus of “All The Things You Are” on his vintage Conn C melody with a Morgan mouthpiece on Instagram.

Dr. Ronald L. Caravan is a clarinetist and classical saxophonist based in Syracuse, New York, and his line of handcrafted mouthpieces are primarily designed for classical and symphonic playing.

His C melody model is relatively affordable and is designed to be used with tenor saxophone reeds.

It is unclear whether these modern Runyon C Melody mouthpieces are still in production, but they are available second-hand online and are jazz-focused mouthpieces with a more powerful sound.

The Zinner 62C mouthpiece is the German-made budget option which is supplied with the Thomann C melody saxophone.

Thanks for checking out this round up of the beautiful but highly underrated C Melody saxophone.

If you were just curious about this instrument, hopefully you’ve discovered some new music to check out. If you’re taking the plunge and buying a C Melody for yourself, let us know how it goes!

For everything else saxophone-related, head over to our saxes page, or jump right in with 10 of the best saxophone brands from around the world.