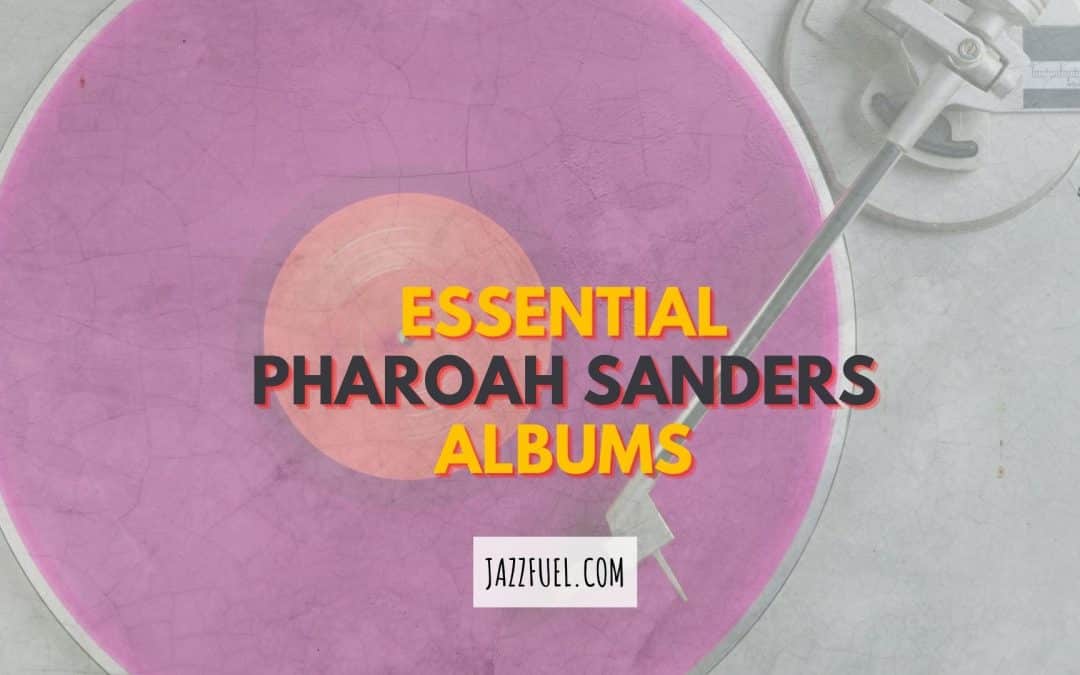 Pharoah Sanders is regarded as one of the greatest tenor saxophonists of all time. A ‘disciple’ of John Coltrane, his sound is loud, passionate and endlessly creative.

In this article, we’ll take a look at ten of the greatest Pharoah Sanders albums of all time, including his early works with Coltrane and his later solo recordings.

Saxophonist Pharoah Sanders was born Farrell Sanders on 13th October 1940 in Little Rock, Arkansas, USA. His early foray into music was with the clarinet, but by high school, he had graduated onto the tenor saxophone which would remain his instrument of choice.

After beginning his professional musical career in Oakland, California near San Francisco in the late 1950s, Sanders relocated to New York City in 1961. Sanders’ early life in the city was tough with little economic success either from music or otherwise.

Sanders described himself as a ‘street person’ (effectively homeless) during these first years of his time in New York.

All this was to change in 1965, thanks to a musical relationship with the by-then established and internationally acclaimed saxophonist John Coltrane.

It was American musician Albert Ayler who coined the phrase ‘The Father, The Son and The Holy Ghost’ to describe this trinity of 1960s avant-garde players, with Sanders cast as son to Coltrane as the father and Ayler himself as the mysterious holy ghost.

This relationship led Sanders to join the John Coltrane band, a recording contract with Impulse Records and world notoriety.

Join us as we dive into ten of the greatest Pharoah Sanders albums, starting with an incredible live recording with his mentor John Coltrane.

This 1965 live album on Impulse released in 1971 documents a fascinating short-lived band put together by John Coltrane, namely an augmentation of his classic quartet, the band behind his seminal album A Love Supreme which was released that same year.

McCoy Tyner, Elvin Jones, Jimmy Garrison performed alongside Coltrane with the addition of Pharoah Sanders and a second bassist Donald Garrett. The music contained within this recording is nothing short of astonishing.

The fact that the young Sanders does not sound out of place next to an established master like Coltrane, says much for his early maturation.

Numbers like jazz standards `Out of This World` and `Body and Soul` are sprawling modal arenas where the musicians play with ferocity and freedom. Yet, mainly thanks to drummer Elvin Jones, the music continues to always swing.

A spellbinding experience. Listen here to Harold Arlen’s `Out of This World` like it has never been performed before or since: 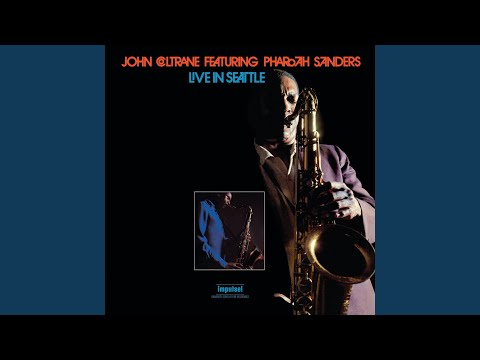 This 1966 live recording documents the last working band Pharoah Sanders was involved with alongside John Coltrane.

Featuring two extended compositions much associated with Coltrane (‘Naima’ and ‘My Favourite Things’), this session showcases the two saxophonists. Sanders` solo on ‘Naima’ highlights his use of texture, gestural playing, a guttural, almost vocal-like tone and an array of extended horn techniques, such as multiphonics and over-blowing.

The performance of ‘My Favourite Things’ is equally compelling with the tenor of Sanders duetting with the rarely heard flute and bass clarinet playing of Coltrane. Altogether, this is a magnificent example of mid 1960s free jazz married to lyrical song form.

This album recorded in 1966, marks Sanders` first release as leader on Impulse Records.

Very much of its era with a certain spiritual aura hanging over it, this album sounds simultaneously modern and ancient. There is also a world music quality here which is reflected in composition titles like ‘Japan’ and ‘Upper Egypt and Lower Egypt’. In fact, the word ‘jazz’ does appear a limiting term in this world music context. Improvisation and group interplay, however, are in abundance here.

What makes this session so attractive is Sanders` ability to make the music successfully occupy such disparate areas as free form collective abandoned playing on ‘Aum’ and the simple, melodically inspired ‘Venus’.

This Blue Note recording from 1966 led by trumpeter Don Cherry features Pharoah Sanders on both tenor sax and piccolo flute.

Alongside the driving, rhythmically propulsive bass and drum team of Henry Grimes and Ed Blackwell, this quartet date (without piano) explores a free jazz sensibility that nevertheless maintains a swing element.

In this respect, Cherry’s compositions are reminiscent of the approach of his former leader, saxophonist Ornette Coleman: melodic sketches which suggest a tonal area and yet, allow for complete freedom for all the players.

This 1970 Impulse Records release under the leadership of pianist/harpist Alice Coltrane features Sanders on tenor and the alto flute alongside Joe Henderson performing on the same instruments.

This makes for a fascinating contrast of styles and approaches to Coltrane’s multi-faceted compositions. Whereas Henderson retains more of a semblance of traditional inside playing, albeit with occasional foray into more free areas (what Coltrane characterised in the album’s sleeve notes as an `intellectual` approach), Sanders is far more abstract and oblique throughout, with much use of extended playing techniques.

Yet, all this music is rooted in a traditional jazz feel, thanks largely to the bass and drum team of Ron Carter and Ben Riley, who, throughout the session, maintain a swing approach. Altogether a compelling recording.

Listen here to ‘Mantra’ and a truly transcendent tenor solo by Sanders. 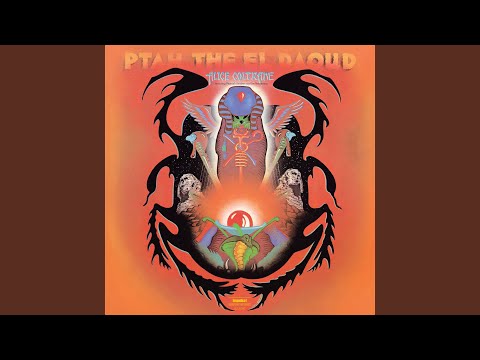 This Pharoah Sanders led 1970 Impulse Records date features what amounts to a New York super group of the period.

Sanders exclusively plays the soprano saxophone here, with much use of the same techniques that characterise his tenor playing, albeit with a lyrical, ecstatic quality that is somewhat reminiscent of the soprano work of his former band leader John Coltrane.

From the spiritually inspired, slow drones and tonal melodies of ‘Let us Go Into The House of The Lord’ to the fast latin and African rhythms and modal bass vamp of the title track, this is an exceptional recording.

By this stage in Sanders` career, many of the more extended saxophone avant-garde techniques of the 1960s had given way to a more conservative approach, which nevertheless remains constantly musical and engaging.

His former mentor John Coltrane is clearly referenced in a straight ballad reading of the standard ‘Easy To Remember’, whilst a fiery uptempo modal original ‘You’ve Got To Have Freedom’ clearly shadows the approach of Coltrane’s classic quartet of the early 1960s.

This 1985 studio recording very much continues the trends heard in Sanders’ earlier live outing from 1981.

There is another nod to John Coltrane in a fine ballad reading of the classic composition ‘Naima‘.

Throughout this quartet release, Sanders is able to tame the wilder musical excesses of his youth in favour of a simple, melodically inspired approach.

Listen here to the exquisite ballad playing on the Sanders original ‘Heart to Heart’, helped in no small measure by the superb swinging rhythm section of John Hicks, Curtis Lundy and Idris Muhammad. 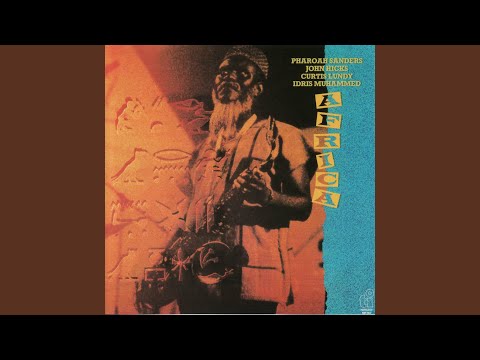 This quartet album comprised exclusively of ballads and featuring Sanders on tenor and soprano saxes, was recorded in 1990.

The choice of numbers from the Great American Songbook is clearly a nod in the direction of his former band leader John Coltrane, and the approach here by Sanders and rhythm section is clearly very reminiscent of Coltrane’s famous 1962 `Ballads` LP.

The playing is supremely mature and shows a deep understanding and appreciation of the material. On the surface and in comparison to his earlier releases, Sanders might, on casual glance, appear to have become entrenched in a kind of conservative, nostalgic reverie to a by-gone age, but deeper listening reveals beautiful, melodic music making by all involved here.

It is simply a pleasure to hear these old standards given such emotional, tender and graceful treatment.

This band with its roots in jazz swing, free form abstraction and African tribal rhythms, seems perfectly suited to the sensibilities of Sanders. From the modal jazz of the title track to the the lightly swaying Latin beat of ‘Africanos/Latinos’, through the fiery uptempo swing of John Coltrane’s classic composition ‘Miles Mode‘, there is much to enjoy on this varied release.

Listen here to some of Sanders` finest playing of this period on ‘Ka-Real’, with a wonderfully sympathetic accompaniment by the rhythm section of Ari Brown, Malachi Favours and Kahil El’Zabar.

Sanders is inspired to produce a compelling performance utilising some of the extended saxophone techniques (circular breathing, over blowing etc) not heard from him since the 1960s-70s. An absolute must hear! 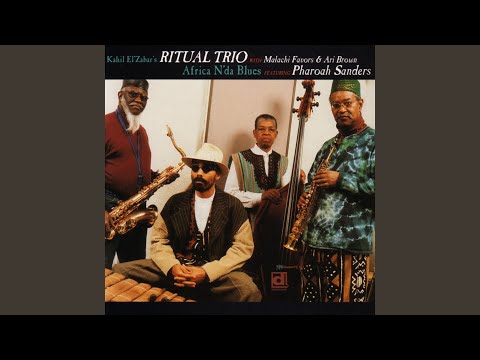 Despite being in his 80s now, Sanders continues to release ground-breaking music.

His 2021 album with electronic musician Floating Points (AKA Sam Shepherd) on Luaka Bop has garnered huge acclaim for its ambition and scope.

With the help of London Symphony Orchestra, the album marries classical music with electronic music and jazz. It’s a unique work that hasn’t quite had the chance to become a classic in Sanders’ extensive discography. Nevertheless, it is worth an honourable mention in this list of the best Pharoah Sanders albums.

Pharoah Sanders has been somewhat of a divisive figure in jazz ever since his first appearances alongside John Coltrane.

For some, a charlatan, for others, almost a messiah-like figure who defined the style ‘spiritual jazz’.

Regardless, spend enough time listening to his recordings, and his sheer command of the instrument will become clear, as will his ability to sustain intense, extended improvisations.

Which albums would you include in your top ten Pharoah Sanders albums? Let us know in the comments!

Read more about the saxophone greats by diving into our list of the best John coltrane albums or check out our rundown of essential Ornette Coleman albums.