10 of the Most Famous Saxophone Solos in Pop Music History 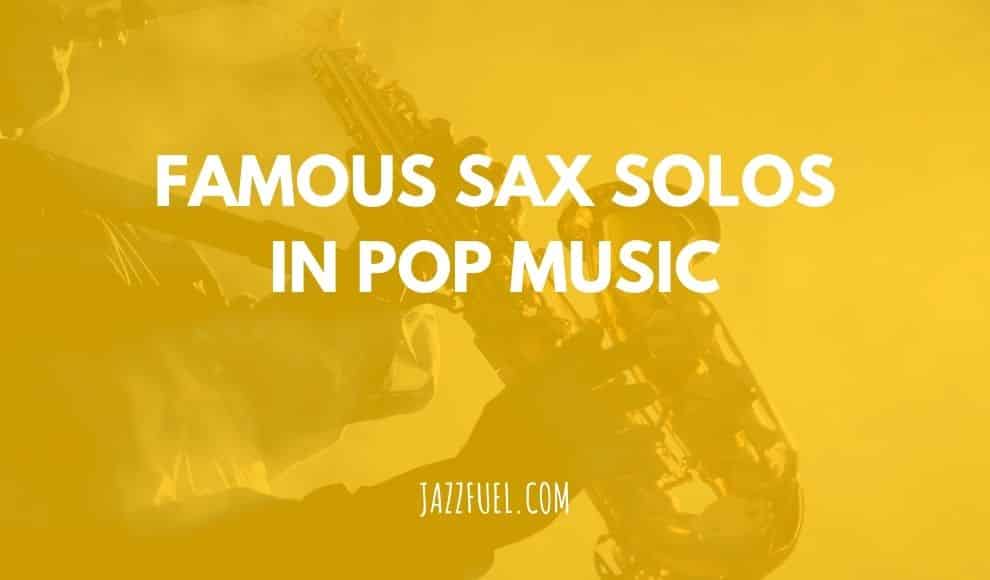 The saxophone may be most closely associated with jazz music, but it’s played an important role in many of the biggest pop songs of all time.

In the spirit of covering all things saxophone, we’ve picked 10 of the most famous saxophone songs in the history of pop music – and highlighted some hidden jazz connections that you might not have known….

A classic that even non-musicians recognise from only the first couple of notes.

This solo is probably more recognisable than the rest of the song itself, and is easy enough to be accessible for most intermediate players to perform.

Not by a lot, but enough to be noticed by musical ears.

However, this only adds to the solo; most people have heard it so often, that playing it in tune just sounds…..wrong!

Whether you’re tuning in to ‘classic’ radio or a school jazz band rehearsal, it’s almost impossible to not hear this one this at least once.

And with good reason: Careless Whisper is one of the most famous saxophone solos of all time.

It didn’t come without it’s recording difficulties though…

George Michael had a very specific vision and sound for the sax solo, and therefore went through various players before finding the one he liked – Steve Gregory on a vintage Selmer Mark VI saxophone.

It’s not an easy solo to play in the written key and was actually recorded a semitone down, and shifted up electronically – a technique that has been used by many artists, including Stevie Wonder.

Singer, songwriter and multi-instrumentalist Van Morrison was a keen saxophonist and, as a result, many of his songs feature the instrument.

Moondance is perhaps the most famous example of this, both for the hit itself, and the saxophone solo.

He actually handed over sax duties to Jack Schroer for this one, who delivers a performance full of vigour and power.

Just The Way You Are (Billie Joel)

Whilst many of the players on this list forged careers as commercial players, Woods was already a verified jazz great, having toured and recorded since the 1950s with musicians including Dizzy Gillespie, Buddy Rich and Benny Goodman.

Whilst some jazz purists frowned on this ‘crossover’ the recording – as well as others with Steely Dan and Paul Simon – helped introduce a whole generation of pop & rock fans to his saxophone playing.

Time of Your Life (Medley & Warnes)

Usually reserved for weddings, this 1987 classic has been played by saxophonists at countless functions over the years.

Once you get into it, however, the harmonics in this solo are surprisingly difficult, featuring that altissimo G# all saxophonists try to avoid due to tuning, and voicing problems…

Just The Two Of Us (Bill Withers)

It maybe a side affect from mastering, or even conscious choice, but if you’ve every tried playing this and not been able to get it quite right, that might be why.

It also adds to that ever elusive dark, warm tone, particularly in the lower register, reminiscent of another jazz saxophone great, Michael Brecker.

While this song is a less common request for saxophone players around the world, it still deserves an honourable mention as a true pop classic.

The bluesy sax solo is performed by Dick Parry and is reminiscent of the alto greats Earl Bostic and Cannonball Adderley.

Listen out for the trills, which are coloured with a slapback delay ambience from the sound engineer.

The slight pitch variations of tape add to an almost unsettling solo!

Posthumously inducted into the rock and roll hall of fame, Clarence Clemons is one of the most famous saxophonists in pop music.

Born to Run is arguably his most well-known solo and, whilst quite short, displays the sheer power and fullness of his tone for which he is renowned.

Listening with today’s ears, it’s almost a cliché if the 80’s sax tone, but it’s worth keeping in mind that this was the origins of that sound!

OK, so this is a very modern addition to the list, but deserves a special mention due to the interesting effects on the track.

The sax is fed through a whole range of effects; stutters, tape stops, distortion and even autotune, to get the final result.

Despite Kenny G appearing in the music video, the saxophone solo was actually recorded by Tower of Power’s very own Lenny Pickett, a player with an incredible level of control in the altissimo register.

While you might not remember the song on first listen, you’ll be sure to know the saxophone solo.

Performed by James Kings, the solo is almost bebop-like and features a high level of melodicism amongst passages of intense phrasing, rhythmic displacement, sideslipping….

It’s a textbook sax-pop performance that is worthy of further study by any budding commercial saxophonist!

That’s it: our round up of 10 of the most famous saxophone solos in pop music.

Of course, we could have added others, but hope you’ve enjoyed learning a little more about these hits!

You can find more sax-related articles here or, if you liked these songs, why not check out our pick of the best pop guitar solos too…