Dixieland Jazz – The Music, The Musicians & The History 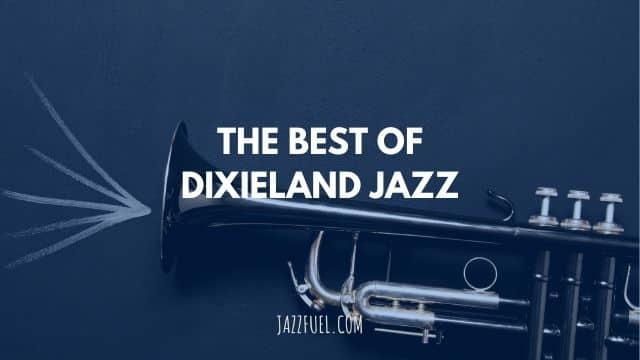 As part of the Jazzfuel series on the different types of jazz, we take a journey back in time to the early days of the music, to discover the key players and recordings of Dixieland Jazz.

Whilst Louis Armstrong may be the key artist connected to this joyous music, there are many more legendary names to learn about…

Jazz developed during the early years of the 20th Century in the “melting pot” of New Orleans, as ragtime was fused with the city’s marching band tradition and various other influences.

The style that was played during this period is now known as Dixieland jazz, or sometimes New Orleans music, traditional jazz or vintage jazz.

The heyday of this idiom occurred during the 1920s, first in New Orleans and then Chicago, although there have been various revivals of the style since then and it retains a dedicated following.

The exact lineup of Dixieland jazz bands will vary, but they typically include a frontline of trumpet (or cornet), clarinet and trombone, plus a rhythm section.

Unlike in later styles of jazz, the instrumentation is likely to be entirely acoustic.

What’s more, clarinets are heard more commonly than saxophones, a banjo often replaces the guitar, and a tuba might feature in place of double bass.

Collective, polyphonic improvisation is a key component, with the frontline instruments all playing interweaving lines around the melody to create a joyful cacophony of sounds.

Stay tuned for a look (and a listen) to 10 great artists who play in a Dixieland style, with a recommended recording for each one.

Louis Armstrong would later go on to become an all-round entertainer, best known for 1960s vocal hits like “Hello Dolly” and “What a Wonderful World”.

But decades before that the trumpeter left his mark as one of the most stunning improvising soloists the jazz world has ever known.

After growing up in New Orleans he relocated to Chicago where, in the mid-1920s, he recorded extensively with his bands the Hot Five and the Hot Seven.

Tracks including “Struttin’ With Some Barbecue”, “Cornet Chop Suey” and “Potato Head Blues” define the “hot” jazz sound of the 1920s and place his bold, operatic trumpet at the forefront. Armstrong has a masterful command of melody and rhythm, making these some of the most important solos in the canon.

In the 1930s Armstrong followed fashion and fronted a selection of big bands, in keeping with Swing era trends.

But in 1947 this live recording saw him return to a classic Dixieland small band setting, with an all-star frontline of Louis on trumpet, Barney Bigard on clarinet and Jack Teagarden on Trombone.

Along with Louis Armstrong, Sidney Bechet was one of the first major jazz soloists and, like Armstrong, he was also a New Orleans native.

After starting out on the clarinet, he discovered the soprano saxophone whilst on tour in London, pioneering the use of the instrument in a jazz context.

A virtuoso instrumentalist, he makes frequent use of intricate, lightning-fast arpeggiated runs, his sound (particularly on soprano) marked by an extremely wide, instantly recognisable vibrato effect.

After some years of struggle, he was invited to play at a festival in Paris in 1949, where he met with an ecstatic reaction.

Upon moving permanently to France, he found massive acclaim, becoming something of a national hero.

He experimented with some French repertoire – “Si tu Vois ma Mere” is one of his best-known recordings – but remained true to the New Orleans style that he had developed in the 1920s.

This compilation album features “Perdido Street Blues” – a collaboration with Armstrong – as well one of his biggest hits, “Summertime”, and a particularly rousing solo on “China Boy”.

The 1917 version of “Livery Stable Blues” by the Original Dixieland Jazz Band is generally considered to be the first ever jazz recording.

This has been the subject of much discussion: it is worth noting that a group of white New Orleans natives were given the opportunity to document their music before a number of African American players who were of much greater musical historical importance.

Still, the Original Dixieland Jazz Band are certainly a significant outfit in the development of early jazz, and their records proved wildly popular.

“Tiger Rag”, which is credited to the band’s cornetist Nick LaRocca, became a Dixieland standard.

LaRocca, whose Scicillian heritage informed the band’s sound, would later court controversy by describing himself as the “creator of jazz” – a claim which is widely considered absurd.

Originally called the Original Dixieland Jass Band, the ODJB later changed the antiquated (and arguably derogatory) “Jass” in their name to the more modern “Jazz”, helping to popularise the word.

As the title suggests, this record brings together those historic early tracks, like “Livery Stable Blues”, “Tiger Rag” and “Clarinet Marmalade”.

Cornetist Bix Beiderbecke was another hugely influential stylist of the 1920s, with an approach that makes for an interesting comparison with that of Louis Armstrong.

While Armstrong’s playing was bold and bluesy, Bix was lyrical and somewhat introspective, largely sticking to the horn’s middle register. Louis, in contrast, was capable of heading up into the stratosphere.

After making a selection of classic small band recordings early on, he joined Paul Whiteman’s highly popular dance band before tragically drinking himself to death at just 28 years old.

He was also interested in impressionist classical music, and composed a number of intriguing piano pieces inspired by this sound world, including the beautiful “In a Mist”, which he recorded himself.

Bix Beiderbecke made some of his greatest recordings with the C melody saxophonist Frankie Trumbauer. A number of classic performances and famous solos are included here, including “Riverboat Shuffle” and “Singin’ the Blues.”

Never exactly the modest type, Jelly Roll Morton famously claimed to have been the inventor of jazz.

That’s probably a bit of a stretch, but he was probably the first to write down and formally arrange the music, and he was certainly a pioneering stylist in the early days of New Orleans jazz.

The pianist’s sound was informed by ragtime, a syncopated African American music that influenced jazz, but which was notated rather than improvised.

As a composer and arranger he wrote a number of early jazz standards, including “Wolverine Blues”, “King Porter Stomp” and “Whinin’ Boy”.

Kid Ory was one of the very first jazz trombonists, with one of his innovations being the development of the “tailgate” style, which saw him playing the lower harmonies below the trumpet and clarinet in the frontline of a traditional jazz band.

His talent was first discovered by the New Orleans cornetist Buddy Bolden, a legendary figure who is considered to be the first improvising jazz musician, but who sadly never recorded.

After Kid Ory became one of the top bandleaders in the city himself, his outfit included legendary players like Louis Armstrong and clarinetists Johnny Dodds and Jimmie Noone.

He was an original member of Louis Armstrong’s Hot Five, with whom he recorded his composition “Muskrat Ramble”, which has gone on to become a Dixieland standard.

Kid Ory and clarinetist Jimmie Noone play trad jazz favourites like “That’s a Plenty” and “Savoy Blues” to an enthusiastic audience on this live album.

The school of trombone playing pioneered by Kid Ory saw the instrument take a supporting role, playing in a rhythmic, punchy fashion below the other frontline instruments.

Teagarden developed a more legato, soloistic way of playing, which put the trombone on more of an even footing with the trumpet.

In the 1920s he played with Bix Beiderbecke, Louis Armstrong, Jimmy McPartland and Mezz Mezzrow, before taking on a full-time position with Paul Whiteman’s Orchestra in the 1930s as he sought financial security during the Great Depression.

In the 1940s he was a member of Armstrong’s highly regarded All Stars band.

Teagarden sings and plays on this soulful Verve album, which was recorded just three years before his 1964 death.

Oliver’s place in jazz history is inextricably tied up with his role in the Louis Armstrong story.

He was Armstrong’s mentor and teacher, first giving him his own newly-vacated chair in Kid Ory’s ensemble, then summoning Pops to Chicago to join his own Creole Jazz Band on second cornet.

Still, King Oliver was a great trumpet player and an important stylist in his own right, although he is not as well documented on records as he should be.

His bands were innovative in their use of collective improvisation and he was able to achieve an extraordinary range of sounds by using different cornet mutes.

He also composed a number of standards, including “Dippermouth Blues” and “Canal Street Blues”.

“It was my ambition to play as he did. I still think that if it had not been for Joe Oliver, Jazz would not be what it is today. He was a creator in his own right.” – Louis Armstrong

This compilation album features the edition of Oliver’s band that placed the two trumpet greats – master and protege – side-by-side.

Trumpeter Red Allen was one of the first musicians to assimilate the innovations of Louis Armstrong and fully take on board his influence. He also followed Armstrong’s career path, heading from New Orleans to Chicago in 1927 to play with King Oliver’s band.

His impassioned trumpet sound was heard on recordings with Billie Holiday, Jelly Roll Morton, Fats Waller and Coleman Hawkins. Like many Dixieland and traditional jazz artists, he was fond of singing the melody of a tune before improvising around it on his instrument.

It may have been recorded in 1957, long after the heyday of the Dixieland style, but the three veterans roll back the years on this rip-roaring live live album from the Newport Jazz Festival.

With a stated aim of keeping the New Orleans jazz flame burning, they are one of a number of modern bands keeping the tradition alive.

Still, the Preservation Hall Jazz Band views it as a living, breathing history, rather than something to be slavishly recreated and, as such, they play original material and have collaborated with artists from outside of the jazz world.

The band interpret a selection of standards from their home city on this 1999 double album, which was recorded at their home venue.

Thanks for joining us for this trip through some of the best Dixieland Jazz artists and music of all time!

If you’re interested in learning more about some of the musicians featured here, head over to our Discover Jazz homepage and keep an eye out, in particular, for our in-depth guide to the different styles of jazz music.