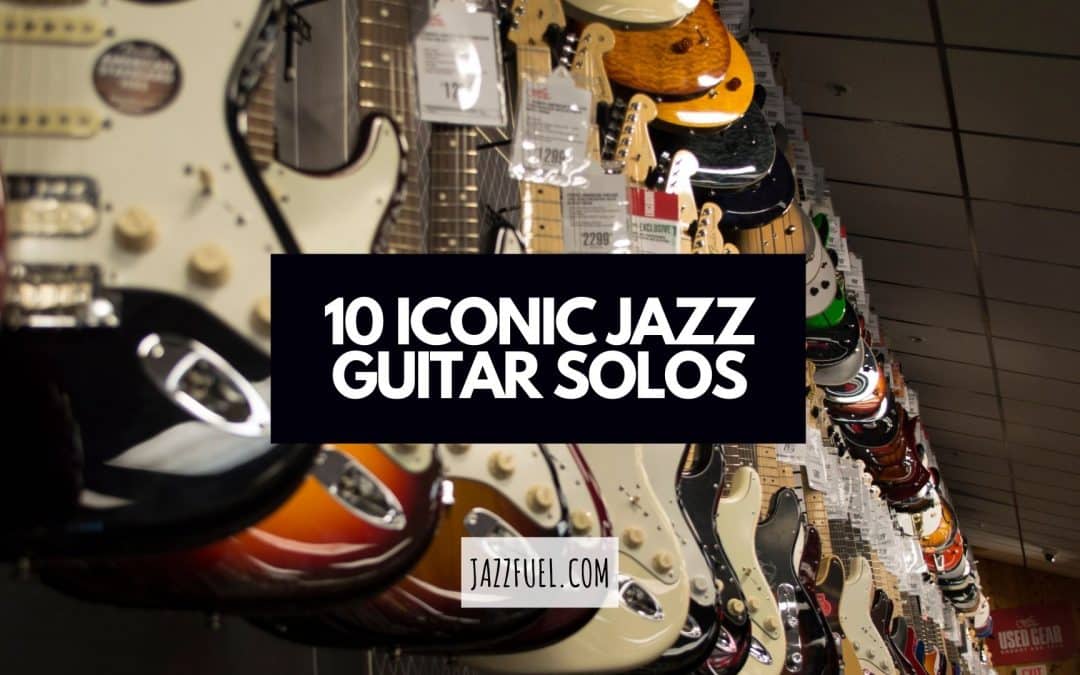 Whether you’re learning jazz guitar or simply a fan of the instrument, listening to the classic solos through history is a great exercise.

Whilst coming up with a definitive list of the ‘best’ jazz guitar solos of all time is of course impossible (as the comments section at the bottom of this article will probably show…) we decided to put our head above the parapet and showcase our 10 favourites, performed by 10 of the best jazz guitarists of all time…

Much like the piano, the guitar occupies a unique position in jazz as both a member of the rhythm section and the front line.

With many important guitarists in the music’s history, we’ve compiled a list of 10 iconic guitar solos worthy of your attention.

As always, there were hundreds of deserving solos that didn’t couldn’t make the list, but we do hope that you enjoy our selections! 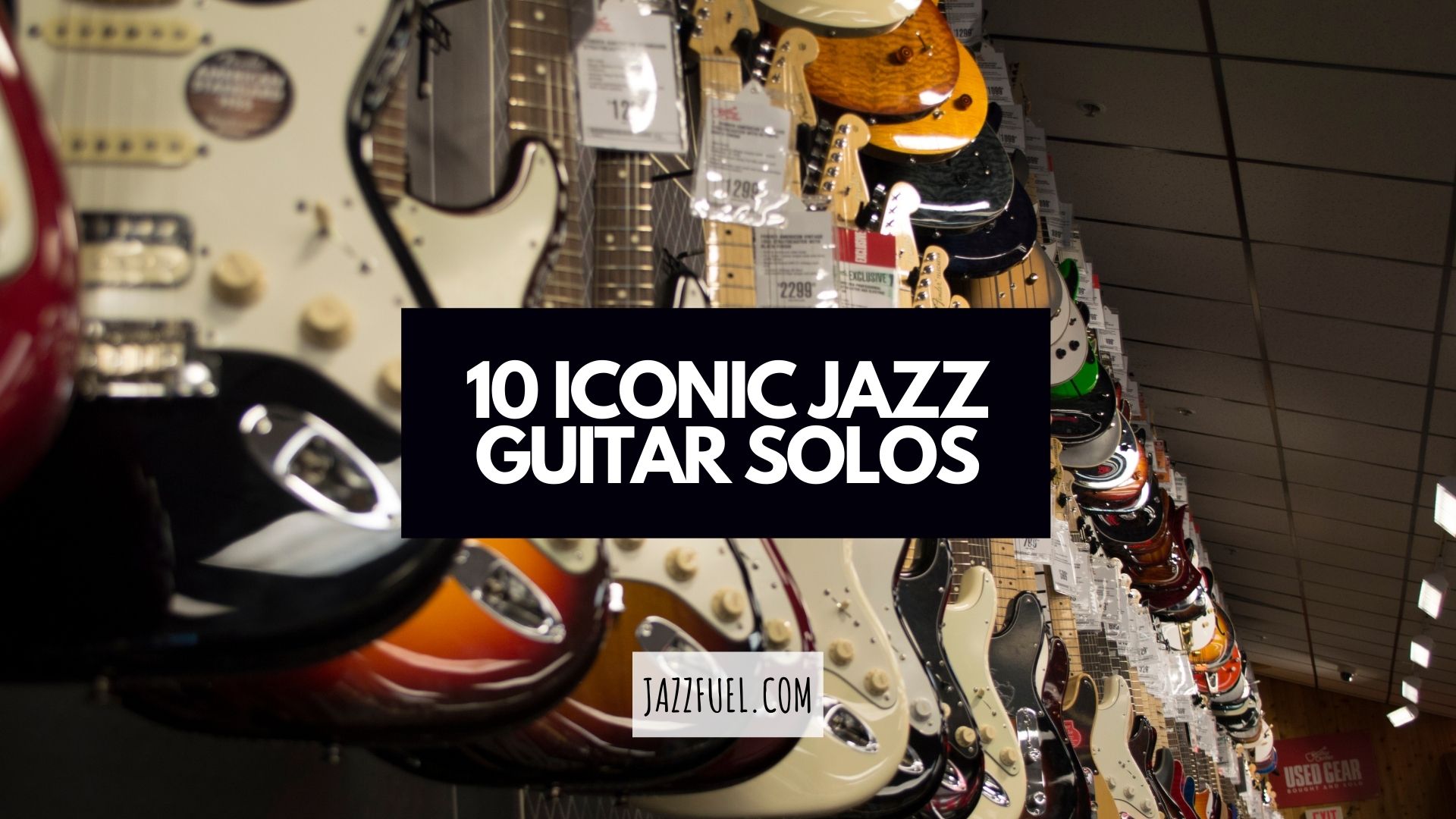 Widely regarded as one of the most important jazz musicians to have ever lived, Django Reinhardt’s inclusion on our list of 10 iconic jazz guitar solos was never in doubt.

Though his left hand was left severely damaged after a fire, (leaving Reinhardt with the use of only to two fingers when playing), he achieved a level of virtuosity and musicality in his guitar playing that is simply extraordinary, and his recordings remain as enduringly popular to this day as they ever have done.

Equally well known for the countless compositions that he penned, our first pick is Reinhardt’s solo on perhaps his best known tune, ‘Minor Swing’.

Characterful, full of swooping melodic lines, and deeply swinging, listen out to how he bends notes with his left hand to imitate a more horn-like sound, and switches seamlessly between single lines and chords. 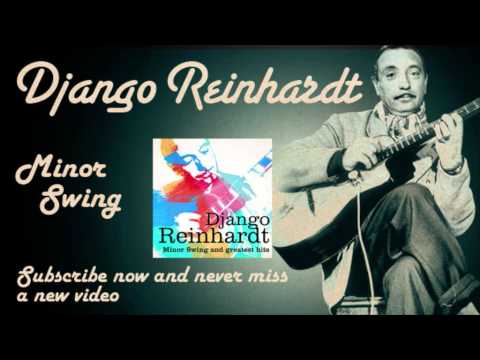 Whilst Charlie Christian is perhaps best known for being the first to popularise the use of the electric guitar in jazz, his legacy runs even deeper.

His fresh improvisational concept which combined the style of Lester Young with others, was to become the foundation of what we call the bop era of the 1940’s, and subsequently pave the way for the ‘modern jazz’ era of the 1950’s.

Listed as a key influence by practically all jazz guitarists who followed him, Christian was a true pioneer, and his recordings prove just as hip today as they must have been when first heard 80 years ago.

We’ve selected the aptly titled ‘Swing to Bop’ (based on the chord changes to the jazz standard ‘Topsy’), a live recording taken from a jam session at Minton’s jazz club.

Listen out for Christian’s strong, meaty tone, achieved by playing mostly down strokes with a stiff plectrum, the interplay between the guitar and the drums, and his flowing, adventurous, horn-like lines.

Equally prolific as a sideman as he is a bandleader, guitarist Kenny Burrell is renowned for his soulful and sophisticated touch, depth of tone, and an improvisational identity that is steeped in the blues guitar tradition.

Widely known for his close association with the Blue Note record label, we’ve chosen the title track from his 1963 release ‘Midnight Blue’ as a great example of his playing.

Masterfully fusing jazz with the blues, listen to how the Burrell and his band create the atmosphere of a smoky late night jazz clubs across the duration of the album, painting vivid pictures with their instruments.

Burrell’s solo on ‘Midnight Blue’ is just as we expect from him, groovy, full of blues based language, and possessing a subtlety that belies its depth.

Listen out to how he accompanies himself at the beginning of his solo, using the same riff based chordal passage in-between his own single line phrases.

Whilst Indianapolis-born guitarist Wes Montgomery achieved commercial success with his popular music recordings on the A&M label, it is his earlier output for both Riverside and Verve that is of perhaps more interest to jazz fans.

One of his finest discs is undoubtedly Smokin’ at the Half Note, recorded live in June 1965 at the Half Note Club in New York City with pianist Wynton Kelly and his trio.

Whilst Pat Metheny states that Montgomery’s solo on ‘If You Could See Me Now’ is his favourite of all time, we’ve selected the track ‘No Blues’ for our list.

Essential listening for all jazz guitarists, this is a fantastic example of Montgomery’s trademark style, combining endless creativity and dynamism, with sophisticated jazz harmony and the blues tradition.

Listen to his propulsive swing feel, as he shifts through the gears in typical fashion, starting by improvising in single lines, moving to octaves, and ending his solo with full chords, played with his unique technique of using his thumb instead of a plectrum.

Much like Kenny Burrell’s Midnight Blue, Green’s Idle Moments perfectly captures the Blue Note sound, and is broadly recognised as one of the definitive jazz guitar recordings of the hard bop era.

We hear Green play with elegance and grace throughout the album, his crystal clear harmonic choices and punchy guitar tone tinged with the blues.

Green’s focus on single line improvising (as opposed to using chords) places him in the frontline of the ensemble, and is a distinctive feature of his playing.

Cool as you like, Green’s understated and unique style is on display throughout this record, worthy of its place in any core jazz collection.

Uniquely positioned on our list as the only solo guitar recording, ‘Night and Day’ from Joe Pass’ 1973 recording Virtuoso is a fantastic example of Pass’ solo guitar style.

Demonstrating extraordinary technical dexterity, coupled with a seemingly endless stream of improvisational ideas, Pass manages to play melodic passages, chords and bass lines at the same time, creating the impression that a whole band is performing.

Viewed by many as the album that announced Pass’ arrival as the premier jazz guitarist of his time, listen to the varied textures and atmospheres that Pass creates on Night and Day, as he weaves seamlessly through the chord changes, surprising the listener with each turn. 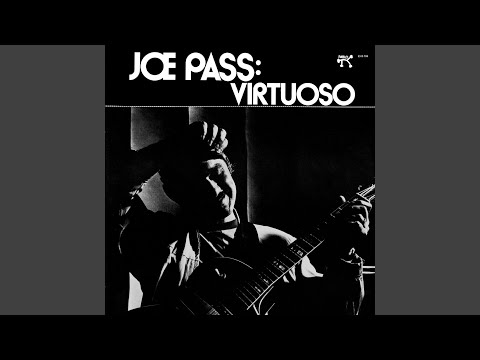 Jim Hall – I Hear a Rhapsody

Referred to by Sonny Rollins as ‘the greatest guitarist in jazz’, Jim Hall’s improvisational style is equal parts subtle and sensitive as it is forward thinking and unabashed.

Many consider him to be the father of modern jazz guitar, and his recording of ‘I Hear a Rhapsody’ from a 1975 trio recording with drummer Terry Clarke and bassist Don Thompson finds Hall in a particularly rich vein of creative form.

The interplay between the trio is sublime (listen out for how they go straight from playing the head into an improvised duet shared between Hall and Thompson), and whilst all selections on the record are well worn standards, Hall breathes new life into the music.

The results sound as modern today as they must have done upon their release over 40 years ago.

Undoubtedly one of the greatest jazz guitarists in history, Pat Metheny’s inclusion on our list of top 10 iconic guitar solos was a given.

Having recorded dozens of albums under his own name and countless more as a sideman, choosing just one wasn’t an easy task!

Considered one of Metheny’s finest albums, we’ve chosen to take a closer look at Bright Size Life, Metheny’s debut outing as a bandleader.

Despite Metheny recording it at the tender age of 21, many of his distinctive characteristics already sound fully formed. Listen out for his angular phrasing, trademark warm tone and fluid left hand articulation on the title track.

One of the greats of contemporary jazz guitar, Scofield’s distinctive sound and stylistic diversity has influenced the landscape of jazz since the 1970’s.

‘Bass Desires’ from the 1985 Marc Johnson album of the same name, is a great example Scofield playing in an open ‘time no changes’ style.

The recording starts with Scofield and fellow guitarist Bill Frisell playing in unison, and then shifts to counterpoint.

Whilst Scofield’s solo starts roughly in the key of F, it soon takes off in all manner of different directions, the band listening out intently to each other as they forge a path for themselves through the music.

Whilst perhaps better known for playing more funk-orientated styles, John Scofield’s swing feel is exceptional, and the rhythmic interaction between him and Peter Erskine is exquisite.

Kurt Ronsenwinkel’s legacy as arguably the pre-eminent jazz guitar voice of his generation is plain to see, and once again selecting just one solo proved challenging!

We’ve opted for Rosenwinkel’s ‘The Cross’ taken from his 2006 record Deep Song.

Stretching out on a relatively straightforward chord sequence, the guitarist soars through the changes with imagination and total mastery of his instrument.

With varied articulation on display throughout (Rosenwinkel is equally comfortable picking every single note with his right hand as he is adding in glissandos and slurs with his left), Rosenwinkel plays with sensitivity and control, never losing sight of the overall shape of his solo. 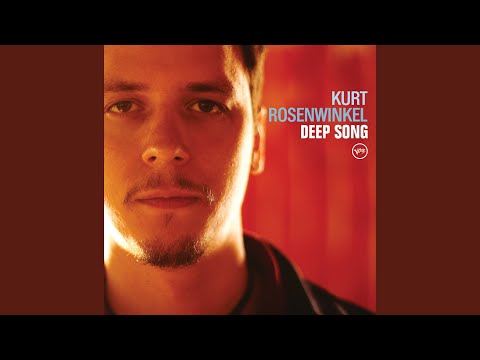 We hope you’ll agree that these are 10 jazz guitar solos of the highest order!

If you’re looking for something a little broader, check out round up of the most famous pop guitar solos of all time.

Looking for more jazz guitar? Check out our round up of the some of the best jazz guitar brands of all time, including a detailed look at the development of Gibson and Ibanez guitars.