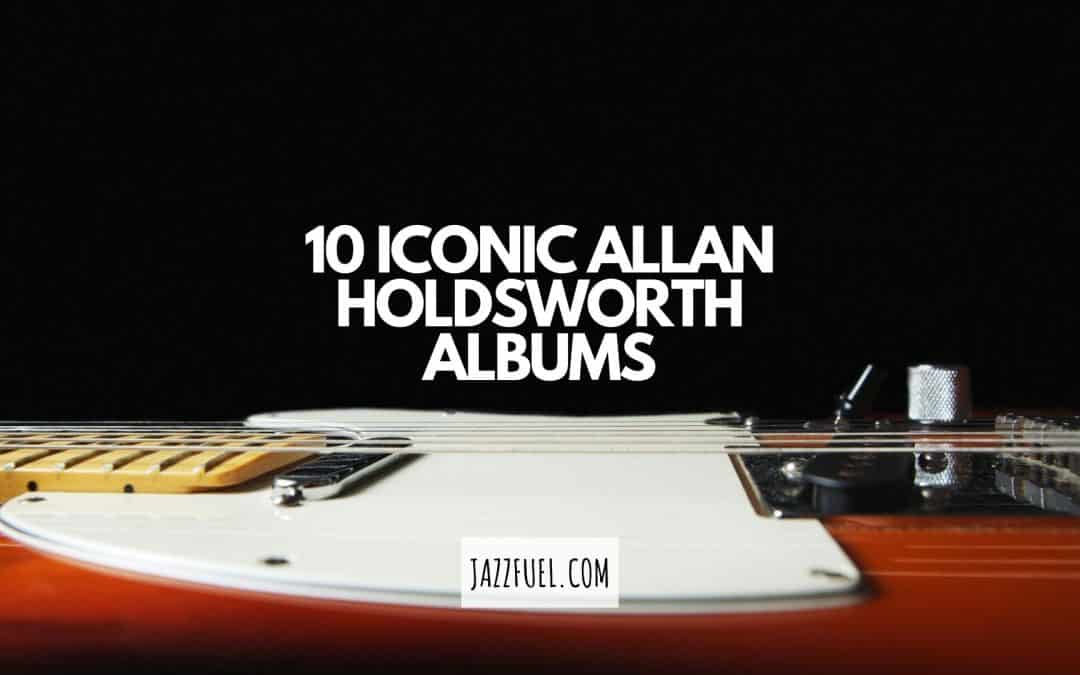 As part of series looking into the great jazz guitarists in history, we’re taking a look at the music of a true guitar icon: Allan Holdsworth.

Regularly listed as the greatest jazz fusion guitarist of all time, Allan Holdsworth has cemented his position as one of the most technically astonishing and important musicians of his generation.

Universally respected amongst the jazz fusion and progressive rock circles, his influence is vast and his recorded output, both as a leader and sideman, is extensive.

And whilst hard-core jazz fans might overlook the guitarist for his associations with rock, he was quoted as saying “I feel I’m more jazz guitar player because I write vehicles geared for improvisation.”

That’s good enough for us, without diving into that never-ending question of “what is jazz?”

We picked 10 of our favourite albums from the Allan Holdsworth discography, taken from different stages of his career and featuring him in different ensembles.

As always, narrowing it down to just ten is a difficult task, but we hope that you enjoy our selection!

Allan Holdsworth’s second studio album I.O.U was recorded in 1979, released on vinyl in 1982 through Luna Crack Records, and eventually reissued on C.D in 1985.

Due to the fact that his 1976 debut Velvet Darkness was released without his consent, Holdsworth claims I.O.U as his first official solo release, and features many re-recorded and re-titled compositions from Velvet Darkness alongside newer works.

Listen out for the extraordinary interplay between the soloing musicians, evocative compositions and ethereal textures that the ensemble creates. 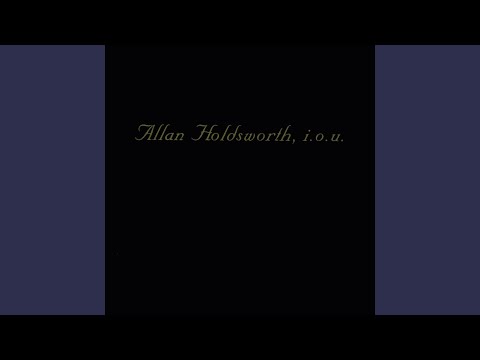 The follow up to the critically acclaimed I.O.U, Metal Fatigue is Holdsworth’s third studio album, released in 1985 through Enigma Records.

Lauded by Daniel Gioffree in his AllMusic review as “one of the most important fusion records of the 80’s’ and as amongst his best work” Metal Fatigue sees Holdsworth joined by Jimmy Johnson (bass) and Chad Wackerman (drums) to play through a set of Holdsworth’s originals.

Listen out for Holdsworth’s trademark legato phrasing and complex harmonic vocabulary on the title track, as well as Paul Williams’ vocals (as heard on his previous record I.O.U).

His ability to create unique and varied textures is present throughout, through his use of bends, slurs and the tremolo arm of his guitar, and this should be an essential addition to the record collections of those who enjoy their fusion and progressive rock.

Allan Holdsworth’s sixth studio album Secrets presents the coming together of years spent developing his sound and technique on the SynthAxe, a fretted MIDI controller created in the 1980’s, first heard on 1986’s Atavachron, and inspired by the electric guitar.

The SynthAxe is a completely unique instrument in its own right and is used extensively by Holdsworth throughout the record, in conjunction with his regular electric guitar and spoken vocals.

His mastery of the SynthAxe should not come as a surprise given his virtuosic capabilities on the guitar, yet the technical heights achieved by Holdsworth on Secrets are still to this day utterly extraordinary.

There are moments of subtlety too, fluid instrumental passages as well as poignant lyrics (written by Holdsworth) and folk like melodies weave into this unmissable record described by the press as “a true masterpiece.”

Bundles was the first time that Holdsworth was to collaborate with Soft Machine, as well as the first time in the group’s history that the electric guitar would be given such a prominent role.

Listen out for his dazzling single-note passages on ‘Hazard Profile, PT.1’ and his own compositions ‘Gone Sailing’ and ‘Land of the Bag Snake’.

Many believe that the virtuosic energy that Holdsworth brought to his brief stint in Soft Machine gave the band the shot of adrenaline and new life that it desperately needed, and for this reason Bundles is a great example of Holdsworth’s stellar work as a sideman. 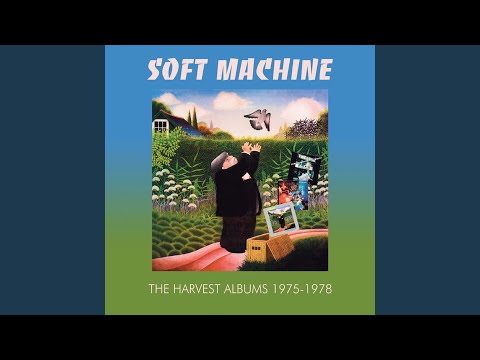 Playing in the trio format alongside long-term collaborators Chad Wackerman (drums) and Jimmy Johnson (bass) this electrifying recording with his well-honed trio serves as a great introduction to Allan Holdsworth’s musical style.

Virtuosic legato single line passages weave in and out of complex time signatures, the rhythm section of Wackerman and Johnson interacting throughout with Holdsworth.

All Night Wrong is a fantastic album, with a real mix of textures and intensity.

Showcasing Holdsworth’s versatility as a sideman, Enigmatic Ocean, a 1977 release by French jazz fusion musician Jean-Luc Ponty is a must-have album addition for fans of the genre.

Regarded as Ponty’s finest work (the album reached number one in the Billboard Jazz album chart in 1977), like many jazz fusion masterpieces it freely mixes colours and textures, intense and fiery compositions sitting alongside those which are reflective and altogether more peaceful.

Another example from Holdsworth’s stellar discography as a sideman, Gazeuse! Recorded by percussionist Pierre Moerlen’s ‘Gong’ ensemble, is the group’s first purely instrumental album, and features Holdsworth as the album’s only guitarist.

It includes two of his compositions, the superb rock-influenced ‘Night Illusion’ as well as ‘Shadows Of’.

The later of the two features a not-often-heard acoustic solo from the guitarist, executed with remarkable precision and clarity. It demonstrates that whilst some fusion guitarists relied on heavily processed guitar tones to mask a lack of ability, Holdsworth’s technique was impeccable, and that when stripped back to just an acoustic guitar, he sounded just as remarkable as when playing his usual electric set up.

Redefining Gong’s sound during a brief stay in the band, away from prog-rock and towards jazz fusion, Holdsworth’s influence on the record is huge, making significant contributions on guitar, but also on violin and pedal steel guitar on the atmospheric ‘Percolations Part One’.

Having been an integral part of Miles Davis’ Second Great Quintet in the 1960’s, Tony Williams’ output as a band leader in the 1970’s saw him move even further from the jazz tradition that he had been pushing the boundaries of with Davis’ band.

His 1975 record Believe It features Holdsworth extensively, and is seen as his breakthrough with American audiences.

Featuring his composition ‘Fred’ (more commonly known as ‘Kinder’, a composition that would stay in his repertoire throughout his career), the record is a great introduction to his unique playing style.

His distinctive harmonic language and soaring legato lines are evident throughout, heavily influenced by John Coltrane and his ‘sheets of sound’ approach.

Holdsworth’s 1993 disc Hard Hat Area remains one of his best as a bandleader.

Featuring legendary drummer Gary Husband, a master of complex polyrhythms, virtuoso bassist Skuli Sverrisson and keyboardist Steve Hunt, listen out in particular for the interplay between drums and guitar on ‘Low Levels, High Stakes’ and the driving energy of ‘Ruhkukah’.

Soaring guitar solos reach exciting heights, and the band creates moments of real tension and release on this essential disc for fans of Holdsworth.

The Sixteen Men of Tain

The most recent recording featured on this list, The Sixteen Men of Tain is Holdsworth’s 10th studio album and was released in 2000.

Displaying a more stripped-back and somewhat intimate aesthetic than previous records, The Sixteen Men of Tain features more guitar than it does Synthaxe, as well as the acoustic bass, instead of the usual electric bass.

Highlights include the intense and creative drum/guitar duet ‘The Drums Were Yellow’, a tribute to the late Tony Williams, as well as the two guest appearances on trumpet from Walt Fowler.

It’s a late career masterpiece from Holdsworth displaying fresh improvisational brilliance, and demonstrating his endless capacity for creativity throughout his entire career. 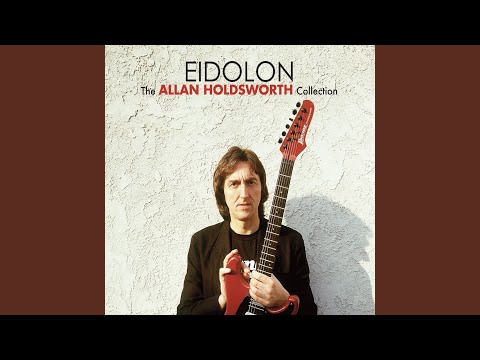 Thanks for joining us for this look through a true guitar great!

If you’re looking to discover more about the most influential guitarists in jazz history, you can find all our related articles here.

We’ve also pulled together some guides on the best jazz guitars from beginner to pro and some reviews of the best amps and strings available today.