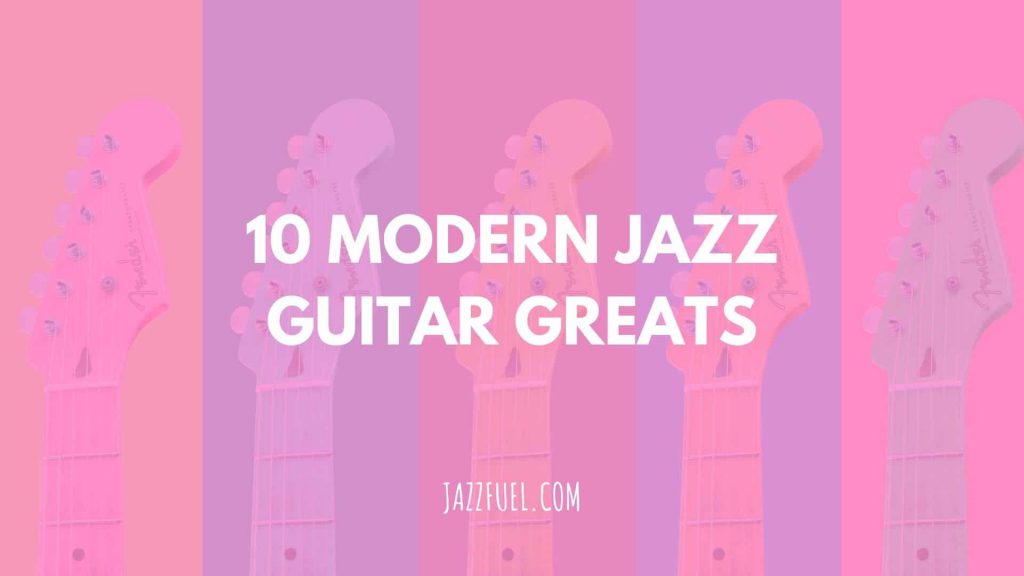 In this article we’ve picked 10 of the best modern jazz guitarists playing in 2021 and taken a look at their style and recommended some of their albums to check out.

When discussing the greatest jazz guitarists of all time, we tend to centre the conversation around heroes of the past.

Of course, whilst they all had their own part to play in defining the role of the jazz guitar, and indeed setting the bar for what could be achieved, jazz has continued to develop, with innovations in composition, harmony and technology paving the way for new generations of guitarists, and their unique voices.

This list of ten of the best contemporary jazz guitarists covers a wide variety of styles and focuses on those who have emerged since the 1990’s.

From straight-ahead to avant-garde, blues guitar to fusion, the influence of these modern-day greats can be readily observed at jam sessions and clubs all over the world. We strongly urge that you check out their recommended listening, better yet – go out and see them live! 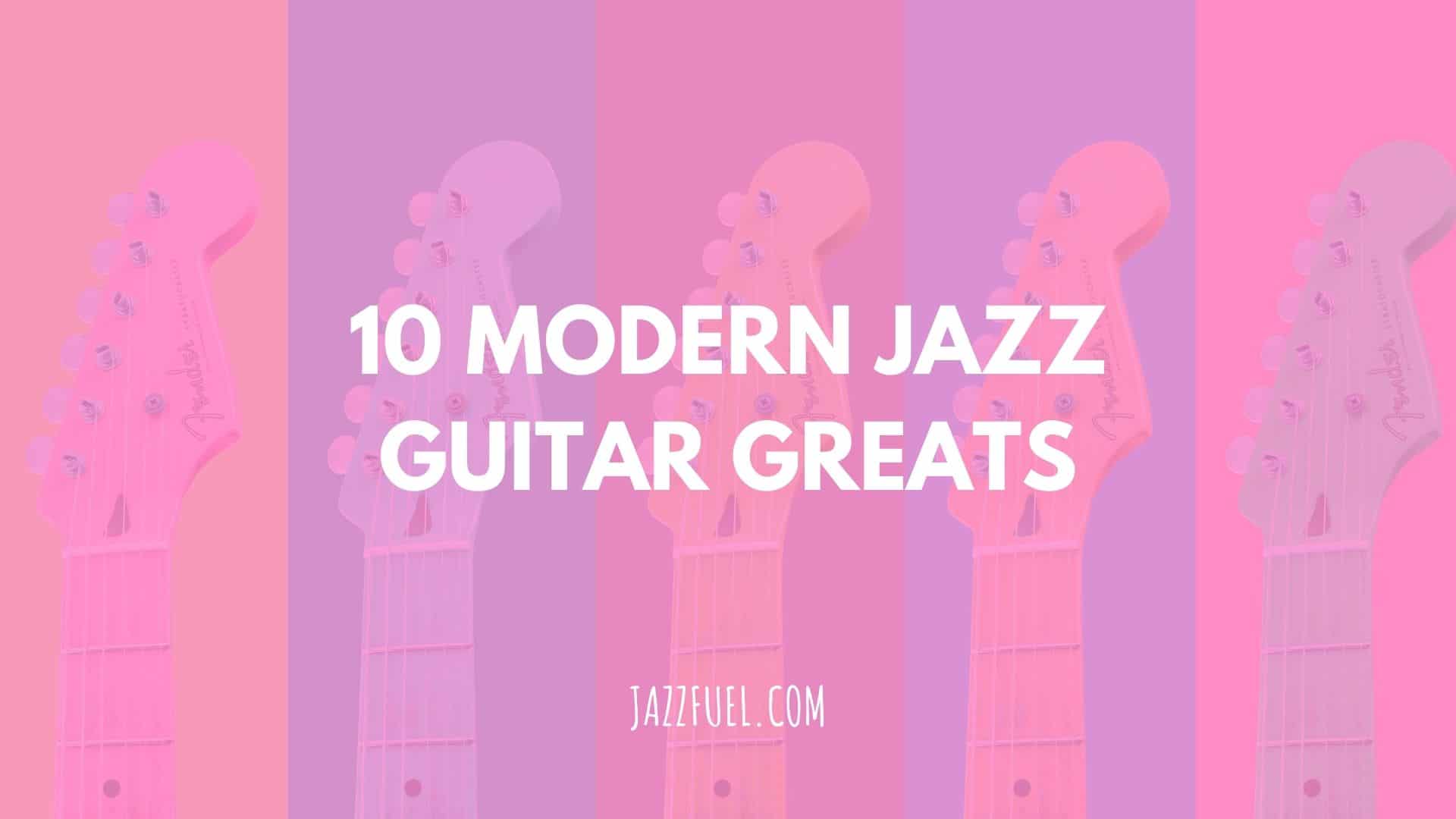 Universally respected amongst his contemporaries, Peter Bernstein has been a vital part of the New York jazz scene, as well as overseas, since 1989. With other 200 recording credits to his name, he’s worked as both a leader and as a sideman for such giants as Jimmy Cobb, Melvin Rhyne and Lou Donaldson.

Bernstein’s deep swinging feel and connection with the tradition, in tandem with his effortlessly forward-thinking approach to improvising are key aspects of his sound, and have seen him rise to prominence as one of the pillars of the contemporary jazz guitar scene.

Bernstein can also be found performing in a solo setting, or leading his most recent quartet alongside Sullivan Fortner (piano), Joe Farnsworth (drums), and Peter Washington (double bass).

Released on the Criss Cross label in 1995, Bernstein’s second recording as a leader Signs of Life showcases this modern jazz guitar great playing a mixture of originals and jazz standards alongside high-flying contemporaries Brad Mehldau, Christian McBride and Gregory Hutchison.

Pasquale Grasso is a truly virtuosic talent, inspired by the great bebop musicians of the 1930’s and 40’s such as Charlie Parker and Bud Powell.

His impeccable technique and unique approach to playing the repertoire of the Great American Songbook has seen him land a record contract with Sony Masterworks and has impressed modern jazz guitar legend Pat Metheny, who described Grasso as “the most significant new guy I’ve heard in many, many years.”

His ability to capture the essence of Powell’s piano’s playing, make it his own and then transfer it onto the guitar has never been seen before.

Grasso’s masterful solo guitar treatment of 5 well-worn jazz standards must be heard to be believed. Flawless bebop lines are punctuated with dazzling chordal work, as the guitarist demonstrates both the depth of his virtuosity and his endlessly creative spirit.

Equally renowned as a composer as she is a guitarist, MacArthur Fellowship recipient Mary Halvorson was described as “one of the most exciting and original guitarists in jazz – or otherwise” by the Wall Street Journal.

Perhaps most known for her playing in the collaboratively lead, avant-garde trio ‘Thumbscrew’, Halvorson is a 3 time winner of the ‘Best Guitar’ award in Downbeat’s international critics poll.

Whilst often defined as a jazz guitarist, Halvorson’s music really defies categorisation and includes elements of many other genres, including rock, noise and free improvisation.

Halvorson’s unique improvisational voice and endlessly creative approach to composition forces the listener to sit up and pay attention.

The trio demonstrate a strong synergy when exploring Braxton’s compositions, and their improvisations range from introspective and reserved to wild and explosive.

Since moving to New York in 2004, Israeli born guitarist Gilad Hekselman has established himself as an important figure on the contemporary jazz guitar scene, and has shared the bandstand with the likes of modern saxophone greats Chris Potter and Mark Turner.

Hekselman’s fifth recording as a leader, Homes was released in 2015. It’s a fantastic example of Hekselman playing in the trio format alongside Joe Martin and Marcus Gilmore, with two additional tracks featuring the great Jeff Ballard.

The trio display a variety of textures as they perform a mixture of originals and selections from the jazz cannon, from soaring melodic passages to moments of intimacy and reflection.

Guitarist Julian Lage is a generational talent with an impeccable technique and seemingly unending curiosity.

Whilst primarily known as a brilliant contemporary jazz guitarist, his explorations into the myriad strains of American musical history have lead him to collaborate with a diverse range of world class musicians, from John Zorn to Gary Burton.

A child prodigy, Lage was set for jazz stardom at a young age, performing at the 2000 Grammy awards aged just 12, and was soon after taken under the wing of the great Jim Hall as a student.

Lage’s 2019 release is his first using the trio of Dave King (drums) and Jorge Roeder (double bass), and was described by Thom Jurek of Allmusic as “a complete delight for listeners.”

It explores the fantastically wide range of styles contained within the American song catalogue, with interpretations of compositions by the likes of Roy Orbison and Ornette Coleman.

Totally authentic, hard swinging, intimate, and full of deep respect for the jazz tradition, the listener is perhaps best treated to his unique sound when hearing him play solo guitar.

Llombart manages to draw a huge variety of textures from the instrument, without the use of any effects or pedals, creating a full and diverse sound-world. Alongside his solo work, Llombart has recently toured as a sideman with Jorge Rossy, Al Foster and Mark Turner.

As he works his way through 10 well-known jazz standards, treating each song with deep respect and demonstrating endless creativity, he proves himself to be a guitarist with a highly individual voice and a beautiful touch.

Beninese guitarist Lionel Loueke was first inspired to pick up the instrument after listening to records by such greats as George Benson, Kenny Burrell and Wes Montgomery.

After studying at the National Institute of Art in the Ivory Coast, he continued his education first in Europe at the American School of Music in Paris, then in the United States at Berklee College of Music.

He eventually studied at the highly prestigious Thelonious Monk Institute (2001-2003) where he struck up a working relationship with faculty members such as Terence Blanchard and Herbie Hancock – both of whom hired the guitarist to be in their bands.

Loueke’s major-label debut Karibu, released on Blue Note in 2008 was met with critical acclaim and features guest appearances from both Herbie Hancock and Wayne Shorter.

His follow up, the much anticipated Mwaliko (also on Blue Note) fuses elements of traditional West African music with jazz, and has Loueke singing in Xhosa-inspired accents, weaving clicks and other percussive consonant sounds into his music.

His depth of touch, harmonic sophistication and unique improvisational voice has won him many admirers, leading him to become a much sought-after sideman for the likes of Mark Turner and the Maria Schneider Orchestra amongst others.

Equally at home with the great American songbook as he is with his impressive array of original compositions, he’s been based in New York since 2002 where he’s cemented himself as one of the most important modern jazz guitar voices around, setting the agenda for jazz improvisation in the 21st century.

Ten ambitious and creative original compositions serve as a point of departure for Lund to take flight, dazzling the listener with some of his most exciting and varied improvisations captured on record.

Arguably the pre-eminent modern jazz guitar player of his generation, Kurt Rosenwinkel’s influence on the contemporary scene is undeniable.

His distinctive voice as both a composer and improviser in instantly recognisable, and has lead him to collaborate outside the realms of jazz with artists as diverse as Eric Clapton, Q-tip and Donald Fagen.

His albums as a leader have inspired countless contemporary jazz guitarists worldwide, and his work in setting up the independent music label Heartcore Records has helped to promote a future generation of talented jazz musicians, with Rosenwinkel operating in the role of producer.

We interviewed him about this, and more, here.

Rosenwinkel’s exploration of the Great American Songbook with his ‘standards trio’ comprising Eric Revis (double bass) and Eric Harland (drums) displays a different side to his playing than previous records.

With less of an emphasis on original compositions (the only original being Rosenwinkel’s ‘East Coast Love Affair’) the listener is treated to Rosenwinkel’s typically sophisticated harmonic explorations on much-loved favourites, recorded beautifully.

Listen in particular to the interaction between the three musicians on the title track, ‘Reflections’.

Another winner of the highly prestigious Thelonious Monk International Jazz Competition (with the likes of John Scofield, Pat Metheny, Jim Hall and Pat Martino on the panel), Dutch guitarist Jesse Van Ruller is renowned for his deeply expressive playing and driving swing feel.

Equally at home as both a bandleader and a sideman, Van Ruller has shared the stage with the likes of Tom Harrell, Christian McBride and Mike Stern.

His three recordings as a leader for the Criss Cross label have been well received, and he can found teaching the next generation of young jazz musicians at the Conservatorium van Amsterdam during term time.

Van Ruller’s first release on Criss Cross features the young jazz guitarist in both quartet and trio setting, offering his arrangements of compositions from the Great American Songbook and jazz canon. Listen out for his sublime chordal work on Ballad of the Sad Young Men.

Thanks for reading and hope you found some inspiration for modern jazz guitarists to check out today.

If you’re looking for content on this topic, you can also check out our round up of the best jazz guitar players of all time, or find all jazz guitar articles from Jazzfuel here.