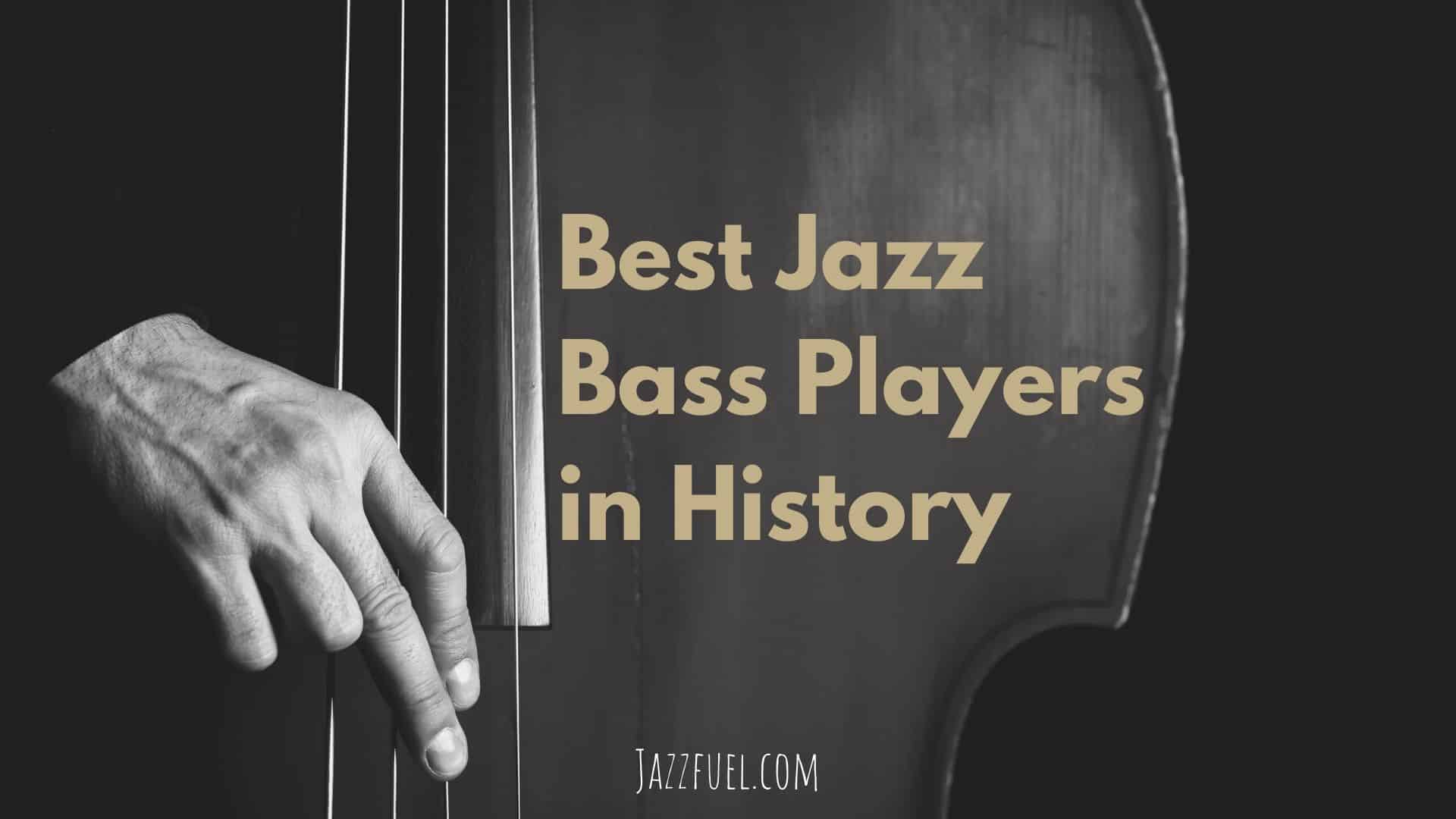 Who are the most famous jazz bass players of all time and what were their most iconic albums? We’ve rounded up players from the modern scene tell you!

Whether you’re a jazz bass player or ‘just’ a fan, we’re sure you have your own ideas about who are the best and why. You probably don’t need to read this list to discover any new names, that’s for sure.

So rather than just roll out the usual bios and video links to these bass legends, we asked some professional, gigging jazz bassists from around the world to add their personal input, from a musician’s perspective, as to why these bass players really are the greatest of all time.

Married to Ella Fitzgerald and performing in one of the greatest piano trios of all time, Ray Brown is surely one of the most legendary jazz bass players in history.

With a career that spanned 6 decades – from the 1940’s bop with Dizzy Gillespie through to his death in 2002 – he was releasing music right up until the end.

Whilst the Ray Brown discography contains some of the best records made, bass players and fans should also check out his work from the 90s as part of Superbass, alongside Christian McBride and John Clayton.

He also dived into the world of jazz education with an excellently reviewed book called Ray Brown’s Bass Method: Essential Scales, Patterns and Exercises. You can find that – and several more – in our round up of the best books to learn jazz.

The jazz bass players view: “I first discovered Ray Brown on a compilation around the double bass.

The theme “Song Of The Volga Boatmen” played with Hank Jones (piano) and Buddy Rich (drums) presented a mainstream interpretation of this traditional melody with such swinging phrasing and perfect intonation. And a few tracks later, he was back with a much more modern and free solo piece. Beautiful.

For me that’s what Ray Brown is all about. He has been through the generations of jazz and is part of the very heart of this music” – Theo Girard, France

The fact that both John Coltrane and Red Garland named tunes after this bass player (do you know both without Googling it?!) goes some way to showing his influence on the history of jazz. His performances as part of “the rhythm section” saw him most frequently alongside either Philly Joe Jones or Jimmy Cobb on drums.

We’d already compiled and published a list of 10 of the best Paul Chambers albums of all time when we put this article together – which only made his inclusion easier! Despite dying at the tragically young age of 33, Paul Chambers appeared on more than 100 albums, including many of the most legendary recordings of the 1950’s and 1960s.

The bassist’s view: “His bass lines are a total reference, for the incredible bounce in his swing and for the choice of notes, his great ears also let him be always very creative inside the song form.

He was able to synthesise the bop language and make it personal, playing also great bowed solos.

Paul is the bassist in many of the albums that a have become milestones in the jazz history, I think that digging deeply in to the study of his lines is a must for all jazz bass players.

As a listening suggestion I would mention an album I love a lot, one of his first as a leader, Whims of Chambers, with a stellar line-up. I also love The Complete Vee Jay Paul Chambers – Wynton Kelly Sessions 1959-1961″ – Ferdinando Romano, Italy

Not only one of the best and most creative jazz bassists of all time, Mingus also broke ground with his compositions. Whilst he is mainly remembered for his work as a soloist and bandleader, he did play with some of the greats in his early days, including Charlie Parker, Louis Armstrong, Duke Ellington (briefly, until he got fired for fighting…) and Lionel Hampton.

Such is his legacy, the Mingus Big Band still tours and performs and fans can attend the annual Charles Mingus Festival in New York.

The bassist’s view: “Charles Mingus is for me the double bass player/conductor par excellence.

For me, the strength of his right hand drives the whole orchestra and propels the soloist; Eric Dolphy being one of the best examples of this.

I was inspired by the madness that transpires in Mingus Ah Um and Tijuana Moods for some passages in my large ensemble, “Pensées Rotatives » (Spinning Thoughts).

“Money Jungle” – an album recorded as a trio with Duke Ellington and Max Roach – is to me a masterpiece” – Theo Girard, France

Despite being born in New Jersey, Scott LaFaro first established himself on the West Coast Los Angeles jazz scene performing with the cool school of musicians including Chet Baker, Victor Feldman and, most famously, Bill Evans.

He also played an important role on the most free scene, performing and recording with Ornette Coleman in the early 60s, before his untimely death in a car accident in 1961.

The jazz bass player view: “Bill Evans Trio’s Live at the Village Vanguard was one the of the first albums I bought and I still can’t stop listening it over and over.

Scott’s playing is so intense and his sound is so big and deep that it blows me away every time.

He set a new standard for bass playing, pushing forward the instrument’s technique and the way of conceiving interplay, still playing very lyrically and inspired.

His experiences with Ornette Coleman pushed him to explore more freedom also in the context of the piano trio, usually more traditional, and together with Bill Evans and Paul Motian they where able to create one unique voice.

Apart from the Bill Evans albums, he also recorded great music with many other musicians like Victor Feldman (The arrival of Victor Feldman) and Hampton Hawes (For Real).

I would suggest as a listening a trio session with Don Friedman & Pete LaRoca, Pieces of Jade. The album is very interesting also because it comes with a taped rehearsal of Bill Evans and Scott playing My Foolish Heart and an interview to Bill that talks about their relationship, it’s a great emotion to listen to these tracks” – Ferdinando Romano, Italian jazz bassist

With a career spanning more than 50 years, Charlie Haden established himself as a central figure in Ornette Coleman’s band, performing on arguably the most celebrated ‘free’ jazz album in history, The Shape of Jazz to Come (Atlantic, 1959).

His creative output both as bandleader and sideman continued to grow and evolve over the years, with highlights including his work on European jazz label ECM: albums with the Liberation Music Orchestra co-led with Carla Bley and as a sideman with the likes of Keith Jarrett, Pat Metheny and Lee Konitz.

The musician’s view: “Charlie Haden has a sound that is recognisable by everyone; each of his notes being charged with a rare intensity.

In his solos, his lyricism can make us lose the pulse but never the ideas – which are always clear. His songs “Silence” and “First Song (for Ruth)” are made of this Hadennian lyricism and have become jazz standards!

I particularly love the record “Steal Away” in duet with Hank Jones where they play Spirituals” – Theo Girard, French bassist

He started his professional career in the 1950s with Jaki Byard, Chico Hamilton and Eric Dolphy, before joining Herbie Hancock, Wayne Shorter and Tony Williams in the Miles Davis Quintet in the mid 1960s.

The only non-American jazz bassist to make the list, Dave Holland was born & raised in England where he established himself on the London jazz scene as the resident bassist at the legendary Ronnie Scott’s Jazz Club. It was there, in 1968, that Miles Davis heard him and, soon after, invited him to join his band.

His recordings with Miles in that period include some of the most renowned: Filles de Kilimanjaro (with Chick Corea, Wayne Shorter and Tony Williams), In a Silent Way and Bitches’ Brew.

He remained in the US, where he’s lived for over 40 years now, but kept his European jazz ties in place with a long-standing relationship with the German record label ECM. It’s there that he recorded many of his own albums as bandleader, as well as with Charles Lloyd, Sam Rivers, Tomasz Stańko & Kenny Wheeler.

The bassist’s view: “Dave represents one of the highest level of versatility, you can hear him playing at the top in the most different contexts, from solo bass to big band, even in styles you would never expect like in the case of the flamenco album in duo with Pepe Abichuela.

To me his desire for self development and growth is a great source of inspiration. He is also a great composer that I continuously dig; besides being one of the most relevant modern bassists he has a deep knowledge of the history and the tradition of bass playing.

I had the chance to talk with him once after a great concert he had with Kenny Barron and he was very nice and kind; we talked about the role of the bass in a duo context, it was deeply inspiring for me. A couple of listening suggestions: Ones All (solo bass album) and Jumpin’In.

I also love his playing with Kenny Wheeler in albums like Gnu High, Double Double You or Angel Song” – Ferdinando Romano, Italy

New York bassist John Patitucci is the second youngest bassist on this list and made his name in the 80s and 90s as part of Chick Corea‘s various bands.

Aside from 15 albums under his own name (starting with the self-titled John Patitucci 1987), he’s recorded with many of the jazz legends from the last 4 decades: John Abercrombie, John Scofield, Victor Feldman, Roy Haynes, Herbie Hancock, Jack DeJohnette, Kurt Elling…

More recently, in the 2000’s, he’s toured and recorded heavily with the great Wayne Shorter Quartet alongside Brian Blade and Danilo Perez.

Over the last 3 decades, Grammy-winning bassist Christian McBride has become one of the most requested, most recorded and most respected figures in the music world.

Born in Philadelphia and educated at Juilliard, he left music school at the age of 17 to tour with Bobby Watson; he quickly became one of the most in-demand players on the US jazz scene.

Californian bassist Larry Grenadier has played with a who’s who of modern jazz history – both from the North American and European jazz scenes, but is perhaps best known for his long-time work as part of the Brad Mehldau Trio.

His first high-profile gig out of school was with vibraphonist Gary Burton, before moving onto the New York jazz scene, as part of the new generation of players including Kurt Rosenwinkel (who spoke with Jazzfuel here), Joshua Redman, Mark Turner, Jorge Rossy, Kevin Hays and Chris Cheek.

Alongside a huge discography with these fellow musicians, on labels such as Criss Cross, Fresh Sound, Origin & Nonesuch) he’s also performed and recorded with some of the jazz legends who are still active, such as Charles Lloyd, Pat Metheny & Jack DeJohnette.

So that’s our rundown of some of the best jazz bass players of all time.

If you’d like to learn more about Christian McBride, we interviewed him for this site a little while ago and you can read it here.

Want some more Paul Chambers music? We posted a list of the 11 most legendary recordings he played bass on.