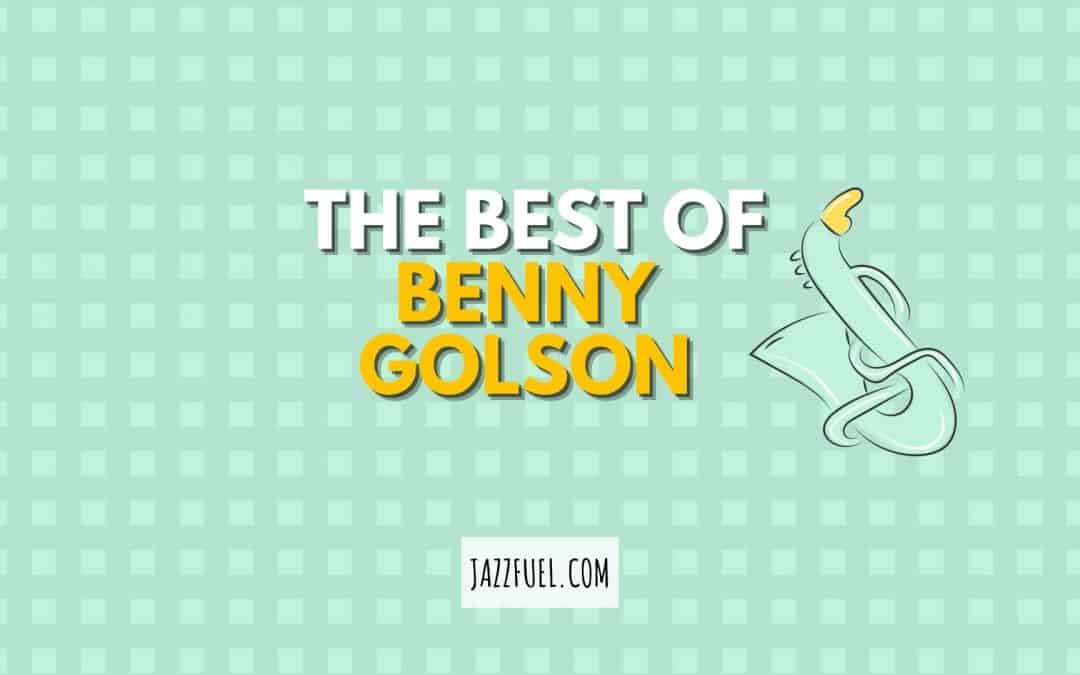 The tenor saxophonist Benny Golson is a bonafide jazz saxophone legend and the man responsible for some of the greatest jazz standards of all time.

In this article, we’ll be taking a tour through some of his best recordings, both as a leader and sideman.

Born in 1929 in Philadelphia, Benny Golson began playing with many of the city’s future jazz stars, including John Coltrane, while still in high school.

He studied music at Howard University and joined the bands of Lionel Hampton and Dizzy Gillespie before recording as a leader.

With his warm, breathy sound, his tenor sax style is influenced by players from the swing and bebop eras, such as Lucky Thompson, Don Byas and Ben Webster.

Golson was also one of the greatest composers in jazz history.

‘Stablemates‘, ‘Killer Joe‘ and ‘I Remember Clifford‘ are among the standards that he penned during his prolific career, all of which have gone on to be covered time and time again.

Benny Golson was one of the 57 jazz stars immortalised in ‘A Great Day in Harlem‘, a group photograph shot by Art Kane for Esquire magazine in 1958.

In this article, we’ll take you through some of Benny Golson’s best albums from his long and prolific career.

Golson’s debut as a leader was released in 1959, two years after his second and third solo albums were released.

The five tracks feature some fine solos from Golson and trumpeter Art Farmer, who would become a frequent collaborator of his over the following decades.

For students of his saxophone style, ‘Something In B flat’ is an opportunity to hear Golson solo over rhythm changes.

The quintet is joined by additional horns on three cuts, including arrangements of the now-classic ‘Whisper Not’ and ‘Just By Myself’.

This album is a masterpiece and is often mentioned alongside other seminal jazz albums that were released in 1959, including Miles Davis’ ‘Kind Of Blue’.

Benny Golson was central to the proceedings, contributing four of the five originals.

‘Are You Real’, co-written with trumpeter Lee Morgan, mixes interplay between the two horns with harmonised lines, and would become a trademark Messengers tune.

‘Along Came Betty‘ is a gentle swinger with phrases that develop over the 34-bar form. ‘Blues March’, which begins with a military-style drum figure, was tailor-made for Art Blakey.

It seems an unlikely jazz tune at first but it is very distinctive. These three very different compositions would become lasting additions to the Messengers’ repertoire.

Although the title track was by Bobby Timmons, Benny Golson was vital in getting the wayward pianist to complete his composition.

He was an influence behind the scenes, persuading Blue Note co-founder Alfred Lion to record the Messengers at a time when Art Blakey had been releasing records through various small labels.

The resulting Rudy Van Gelder recording is head and shoulders above the other Messengers releases from this period.

It’s worth noting that Blakey’s new sidemen were all from Philadelphia and probably knew each other well. Benny Golson and the earthy bass player Jymie Merritt had worked together with Bull Moose Jackson.

While Art Blakey was the undisputed leader of the Messengers, he often had a strong composer in his band who would function as musical director. These would include Wayne Shorter soon after Golson, and trumpeter Terence Blanchard in the 1980s.

The Other Side Of Benny Golson (Riverside 1958)

Recorded a month after ‘Moanin” and featuring a memorable cover, Golson’s third solo outing was to be the first of many with trombonist Curtis Fuller.

We hear more of Benny Golson in this two-horn front line as he takes the melody and solos more on tunes such as ‘Are You Real’, while with trumpet he would usually play a harmony part.

‘Strut Time’ is memorable for its bluesy hits and the sort of angular chord progression that Wayne Shorter brought to the Messengers.

Benny Golson was a Messenger for less than a year but he did visit Paris with the band in late 1958, shortly after recording ‘Moanin’.

This album, recorded at L’Olympia, which still stands today, presents the tracks of the studio album but with the added energy, interplay and extended solos that we would expect from a live recording.

The programme also includes versions of Golson’s ‘I Remember Clifford‘ and ‘Whisper Not’. Another recording from the same tour, issued as ‘Complete Concert at Club St Germain’, is excellent too.

Recorded a mere five days after ‘The Other Side’, this date matches trumpeter Lee Morgan with pianist Ray Bryant, Percy Heath on bass and Philly Joe Jones.

It is particularly interesting for its version of ‘Stablemates’.

Named after a Boston jazz club, this Golson composition was recorded in 1955 by Miles Davis and had already begun to have a life beyond the composer.

The 1956 recording by bass player Paul Chambers (featuring John Coltrane) is arguably the best version, with the reharmonised first bar that has become the norm.

Benny Golson composed all the tunes for trumpeter Lee Morgan’s third album, which he recorded when he was just 19.

Highlights include the Middle East-inspired ‘Hasaan’s Dream’, the fast-swinging ‘Domingo’ and ‘I Remember Clifford’; a ballad that Golson composed as a tribute to the trumpeter Clifford Brown.

This was first recorded by Donald Byrd earlier that year and quickly became a standard. It is Golson’s most covered composition, with over 300 recordings of the jazz standard.

The Dizzy Gillespie Octet: The Greatest Trumpet of Them All (Verve 1957)

This modestly-titled recording is bookended by two Benny Golson originals, ‘Blues After Dark’ and ‘Just By Myself’.

It’s good to hear the trumpet virtuoso soloing on these tunes, which serve to remind us of Golson’s ability to write catchy themes that musicians enjoyed playing. Alto saxophonist and composer Gigi Gryce is also a key man on this recording.

The Jazztet was a sextet co-led by Benny Golson with trumpeter Art Farmer and Curtis Fuller.

On the first of 12 recordings, the band included Art’s brother Addison Farmer on bass, drummer Lex Humphries and a young McCoy Tyner on piano. Among the tracks are some spirited readings of ‘I Remember Clifford’ and ‘Blues March’.

A notable success was ‘Killer Joe‘, inspired by a pimp and recorded here with a spoken monologue introduction.

Quincy Jones’ slick large ensemble recording from 1969 has become the best known version of this Golson composition. He took it at a brighter tempo, but the piano voicings, drum beat and bass line are mostly unchanged.

Benny Golson recorded a few ‘concept’ albums in his career which now seem quite bizarre.

‘Pop + Jazz = Swing’ from 1962 was an experiment with the stereo format, inviting the listener to switch tune between a jazz band and a string section on the left and right channels.

Another of his concept albums, ‘Tune In, Turn On‘ is a set of easy listening music taken from commercials, recorded in 1967.

‘Take A Number From 1 To 10’ is far more successful but it too has a gimmick: it begins with Golson’s solo tenor and adds a musician on each subsequent track. The 10th and final track, ‘Time’, is scored for a 10-piece ensemble including French horn.

Highlights on the album include Golson’s weaving bop rendition of the standard ‘You’re My Thrill’.

‘Little Karin’, a signature Golson swinger in the style of ‘Along Came Betty’, features a young Freddie Hubbard on trumpet.

Benny Golson abandoned the saxophone altogether in the late 1960s to concentrate on composing for film, TV and commercials in the lucrative Los Angeles studio scene.

Invitations to record as a sideman brought him back to jazz and he reformed the Jazztet with Art Farmer in the 1980s.

To coincide with the release of the movie ‘The Terminal’, in which he has a cameo role, Benny Golson recorded ‘Terminal 1’ for the Concord label. Here he reprises ‘Killer Joe’ and ‘Blues March’ and blows an inventive solo on Dave Brubeck’s ‘In Your Own Sweet Way’.

These are just a small selection from the hundreds of recordings that Benny Golson has been a part of.

You can discover more of his playing via our round up of the legendary Blue Note discography, or via our Hard Bop guide.

Let us know your favourite albums of his in the comments!

Discover more great music from the greats of jazz sax in our saxophone section or check out our guide to the best beginner tenor saxophones.