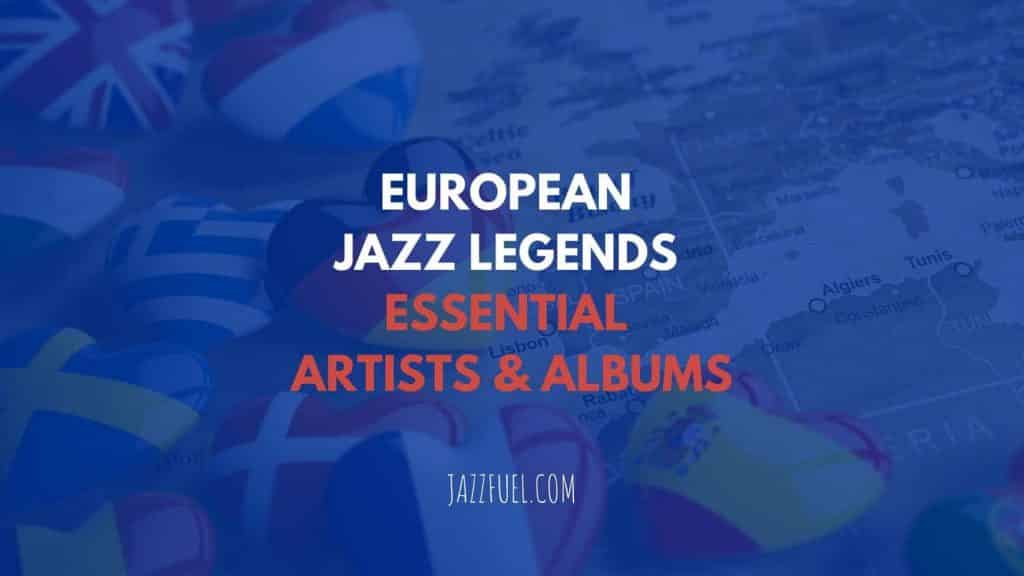 Whilst jazz music is of course, historically, an African American art form, European musicians have been performing this music since the 1920’s and have played an important role in the development of the style and its many sub-genres.

Back in the early days, with with no official jazz education, study books or even much access to recordings, it must all have seemed very mysterious.

But with the boom in air travel and the growing popularity of the music in the 1950’s and 1960’s, European jazz musicians benefitted from gigs accompanying touring Americans.

Some of most prominent of these US players even began to move to Europe around this time: Dexter Gordon, Kenny Clarke, Ben Webster, Stan Getz and Chet Baker all spent extended periods of time on the continent, playing with native musicians and helping cultivate the local jazz scenes.

Add to that the fact that many European governments have been more willing to fund the arts than their US counterparts and you can see how a recognisably European Jazz sound began to emerge.

Music with influences such as Scandinavian folk, avant garde and even classical composition – supported by legendary record labels like ECM – saw the growth of an aesthetic that was often distinctively ‘non-American’.

Of course now, with internet access and the proliferation of formalised jazz education, it’s possible to study the whole history of this music from anywhere in the world, with strong jazz scenes of all styles in nearly all the major European cities.

But for this article, we just wanted to highlight some of the European jazz musicians that played an essential role in the development and popularity of this distinctive sound.

Of course, a list like this can never do justice to all the great musicians that such a huge continent has produced.

To narrow it down, we’ve limited ourselves to one musician per country and focused on those that primarily remained in Europe. Which is why – as you might have noticed – we haven’t included the likes of Dave Holland, Annie Ross, Toots Thielemans, Victor Feldman or George Shearing…

Norwegian saxophonist Jan Garbarek has had a long relationship with Manfred Eicher’s ECM Records, having recorded extensively for the label since 1970.

Garbarek has also collaborated with the early music vocal group The Hilliard Ensemble and has incorporated various world music elements into his sound world.

This 1977 effort is the best-known album by Jarrett’s ‘European Quartet’, and is full of memorable themes.

Born in Trieste, Italy, Rava started his musical life as a Dixieland trombone player until, under the influence of Miles Davis, he switched to the trumpet.

He has been referred to as the ‘Grandmaster of Italian jazz’, and has played with heavyweight American musicians like Roswell Rudd, Carla Bley, Joe Henderson and Joe Lovano, as well as giving sidemen gigs to young players from his home country like Stefano Bollani and Giovanni Guidi, who have gone on to have major careers of their own.

After 17 years away from the label, Rava returned to ECM in 2003 with an all-Italian quintet which featured Stefano Bollani on piano and Gianluca Petrella on trombone.

Apart from the title track, all of the tunes are composed by the bandleader.

Taking inspiration from Ornette Coleman and John Coltrane, Polish trumpeter Stanko was one of the first European jazz musicians to play free music in the early 1960s.

He also appeared on pianist Krzysztof Komeda’s Astigmatic, which is considered a classic of Polish and European jazz.

During the 1970s he became one of the major names in European free jazz, playing at many of the major festivals. Later in life he moved to Manhattan and recorded with some of New York’s most creative younger musicians like David Virelles, Thomas Morgan and Gerald Cleaver in the years before his death from lung cancer in 2018.

The New York Times described him as “one of the most acclaimed improvising musicians in Europe.”

This 1997 ECM Records album features Stanko’s international quartet of the time, with Bobo Stenson and Anders Jormin (both from Sweden) on piano and bass respectively, and British free jazz drummer Tony Oxley.

It showcases Stanko at his lyrical, introspective best.

After first gaining recognition for her performances at Ronnie Scott’s Jazz Club in London in the late 1960s, Norma Winstone became perhaps the premier vocalist in British jazz.

She was in the chamber jazz trio Azimuth with John Taylor and Kenny Wheeler, and also appeared on the latter’s classic Music For Large and Small Ensemble (which made our list of 8 iconic Kenny Wheeler albums).

An incredibly versatile musician, she is known for her wordless improvisations in more Avant garde settings, but has also recorded standard material extensively.

A well-regarded lyricist, she has written words to Jimmy Rowles’ ‘A Timeless Place’ (originally titled ‘The Peacocks’) and Steve Swallow’s ‘Ladies in Mercedes’.

This 1993 recording sees the vocalist accompanied by a high profile L.A.-based rhythm section, including pianist Jimmy Rowles, whose composition ‘The Peacocks’ Winstone wrote lyrics for as ‘A Timeless Place’, and which has subsequently become something of a singers’ standard.

After early-career recordings with more mainstream players like Hampton Hawes, Joe Pass and Stephane Grapelli, German bassist Eberhard Weber developed a style of chamber jazz that was notable for its distinctly European sound at time, in the early 1970s, when this was still relatively unusual.

Placing his self-designed electric-acoustic bass at the forefront, his classical-influenced, ambient music is almost the archetype of the ECM sound.

As a sideman, he has played extensively with Jan Garbarek and also enjoyed a long association with the art pop singer Kate Bush.

A stroke in 2007 ended his bass-playing career, but he has continued to produce fresh material by cleverly editing and rearranging old recordings to create new compositions.

Weber’s 1973 debut as a bandleader was influential in embracing a highly distinctive, clearly European, chamber sensibility that was relatively free of the influence of American jazz, whilst still leaving plenty of room for improvisation.

Montoliu’s playing is more obviously connected with the American jazz tradition than many of the musicians on this list, and he performed with many great US artists who had relocated to or were touring the European jazz festivals & venues – including Ben Webster, Dexter Gordon, Kenny Dorham, Lucky Thomspon, George Coleman and others – before his death in 1996.

He was born blind in Barcelona and is considered to be one of the greatest jazz musicians to have come from Spain.

His piano style was rooted in bebop, but he also recorded with avant garde musicians like Anthony Braxton, and his compositions often referred to his Catalan heritage.

The trio, which recorded a run of albums together in the 1970s, kicks off this programme of standards with an energetic look at John Coltrane’s tricky ‘Giant Steps’.

Stenson first attracted attention whilst accompanying American artists – including Stan Getz, Sonny Rollins and Gary Burton – when they visited Stockholm in the 1960s.

He went on to play with some of the biggest names in Scandinavian jazz, including Jan Garbarek, Palle Danielsson and Jon Christensen (all three of whom were in Jarrett’s ‘European Quartet’) and Norwegian bassist Arild Andersen.

He has also released 10 albums as a leader on legendary jazz record label ECM, as well as appearing on recordings by Americans Charles Lloyd and Don Cherry.

Stenson has a long running trio with Anders Jormin on double bass and Jon Fält on drums, but this 2004 effort features American jazz legend Paul Motian in the drum chair.

Renato Wardle, writing for All About Jazz, placed this “somewhere between the worlds of twentieth century classical music, the music of Ornette Coleman, minimalism, and Scandinavian folk music”.

He is best known for his co-led big band with the great American drummer and bebop pioneer Kenny Clarke, who had emigrated to Paris.

In the 1960s it was considered one of the finest big bands outside of the United States.

The ensemble’s personnel varied over time, as it featured top European jazz musicians alongside star US expatriates and touring players.

Americans Johnny Griffin, Idrees Sullivan and Sahib Shihab appear on this this live recording from 1967 alongside a number of British players, including Jimmy Deuchar and Ronnie Scott.

Petrucciani was born with osteogenesis imperfecta, a genetic condition which caused him to have brittle bones and only grow to three feet in height, but he managed to become a world-renowned pianist and a national hero in his native France.

His virtuosic, extroverted playing saw him accompany the likes of Joe Lovano (the album From the Soul is excellent) and Charles Lloyd.

His acclaimed 1987 album Michel Plays Petrucciani saw him interpret his own compositions with an all-star American band.

Known for his confidence, showmanship and exuberant zest for life, he died in 1999, aged just 36.

Recorded live at the 1986 Montreaux Jazz Festival, Power of Three features the pianist with two giants of American jazz: Wayne Shorter on soprano and tenor saxophone, and guitarist Jim Hall.

This was Petrucciani’s 12th album as a leader, despite the fact that he was only 23 at the time.

All three players contribute compositions to this fabulous set, the footage of which is also available as a DVD.

The guitarist first found prominence in Chico Hamilton’s Quintet, which pioneered thoughtful chamber jazz in the early 1960s before, like a number of musicians on this list, working with the saxophonist Charles Lloyd.

But although the trumpeter and composer was born in Toronto in 1930, he lived in London from 1952 until his death in 2014, and left an indelible mark upon the British jazz scene.

Inspired by American players like Clifford Brown and Booker Little, he was initially active on the London bebop scene with players like Tubby Hayes and Ronnie Scott, before becoming involved in the European free jazz circuit of the 1960s.

One of his best-known albums is Gnu High, which features Keith Jarrett in a rare sideman appearance.

Angel Song, with Lee Konitz, Bill Frisell and Dave Holland is another memorable small group outing, but he is perhaps best loved for his big band writing: his highly melodic compositional style is informed by the classical composers Hindemith and Vaughan-Williams.

A real musicians’ favourite, the big band on this 1990 album features a number of prominent names in British jazz, including Norma Winstone, Evan Parker, Stan Sulzmann and Henry Lowther.

The first half of the double disk set comprises Wheeler’s Sweet Time Suite, whilst the second disk includes a number of small group combinations, finishing with a reharmonised arrangement of the standard ‘By Myself’.

Of course, there are many musicians we could have included in here, and we’d love to hear your suggestions in the comments section ahead of our next update. But, as I think you’ll agree, these 11 musicians showcase some of the great performers of this highly distinctive European jazz style.