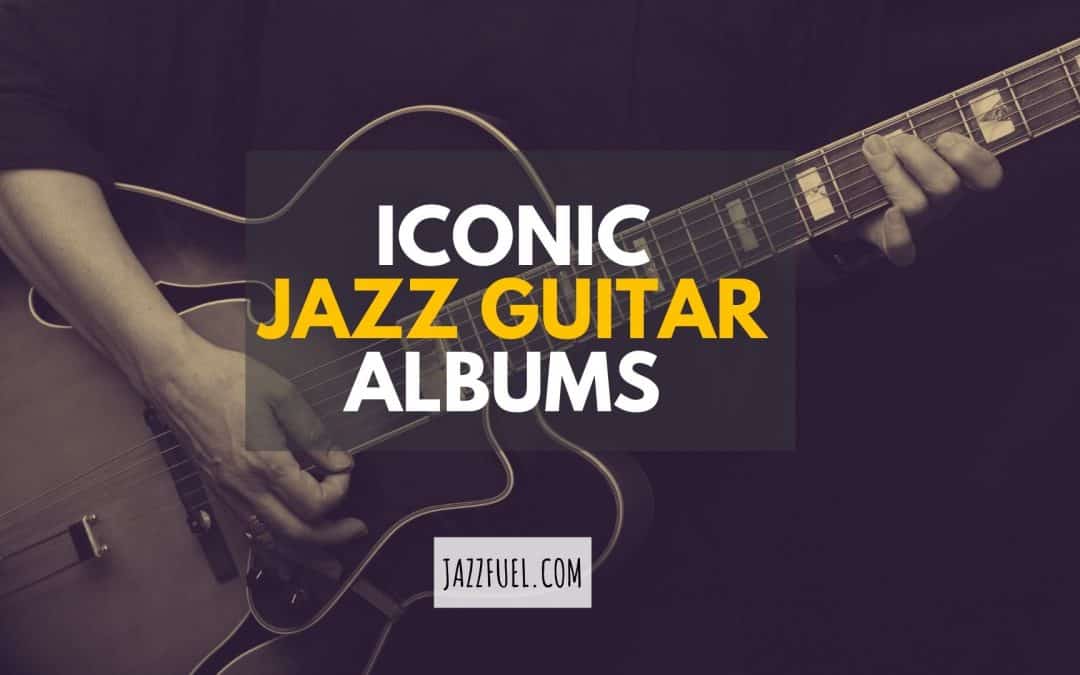 If it’s hard to pick just ten of the most important jazz guitarists in history, the challenge of making a list of just ten essential albums should be considered almost impossible!

But whilst we’ll never come up with a list that covers all bases, there are a selection of famous jazz guitar albums that trace the lineage of the instrument from its acoustic beginnings to its use on the modern scene, as you’ll see and hear in this article.

We’ve compiled a chronological list of essential jazz albums by guitarists that have been highly influential to the development of the style, through their distinctive and unique way of playing.

Starting with Django Reinhardt before moving onto Charlie Christian, one of the first electric guitar players, we’ll take a listen to virtuosos like Wes Montgomery and Joe Pass.

After that, we’ve got post-bop masters Jim Hall and Grant Green, before moving onto fusion and modern guitar references Pat Metheny, John Scofield and John McLaughlin.

We’ll finish with one of the most important jazz guitar influencers of today, Kurt Rosenwinkel.

So if you’re looking for inspiration, each of these choices should deliver!

Belgian-born Romani French jazz Manouche  – or mostly known as Gypsy Swing – guitarist Django Reinhardt is considered one of the most important musicians of the 20th century.

He was one of the first jazz talents to appear on the European scene and remains one of the essential figures in jazz guitar history.

Alongside the French violinist and improviser Stéphane Grappelli, he formed the Hot Club de France quintet which was one of the first jazz ensembles featuring the acoustic guitar as the lead instrument.

Django Reinhardt is a remarkable instrumentalist and improviser who developed his own way of playing the left hand with only two fingers.

Due to an accident that he had at the age of 18, which made him lose the use of the third and fourth fingers, he had to find new ways of playing the guitar.

As John Fordham, from The Guardian mentioned, “he developed a unique style full of vibrato-humming fast runs, piano-like trills and sax-like speed.”

Djangology, released in 1961, is a compilation that includes the last recordings made by Reinhardt and Grappelli during their tour of Italy in 1949 featuring an Italian rhythm section.

It presents some jazz standards and some of Django’s famous compositions such as Minor Swing, Brick Top and Djangology.

Daniel Gioffre, at All Music reviews, summarises saying that “Djangology captures one of the greatest jazz guitarists in history in some of his greatest performances.”

The Genius of The Electric Guitar – Charlie Christian

Charlie Christian was one of the first electric jazz guitarists who featured this instrument at the forefront of the orchestra as a solo instrument.

He is considered one of the precursors of bebop and a key figure in the development of the lead guitar role in ensembles and bands.

The Genius of The Electric Guitar is a classic jazz album consisting of a collection of tracks recorded with the Benny Goldman Sextet and Orchestra during Christian’s short career from 1939 to 1941.

It features the electric guitar as the leading melodic instrument and set the principles of what bebop improvisation will become.

Including several improvised parts, sometimes with two instruments improvising at the same time into a kind of musical dialogue. An example of this can be found in the track Waiting For Benny.

Charlie Christian was an innovator in jazz and one of the most important figures in the history of the electric and jazz guitar.

Wes Montgomery is one of the pillars of jazz guitar and hard bop.

He was renowned for his virtuosity and distinctive right-hand technique using the thumb like a pick, which generated a smooth plucked sound with less brightness.

This type of sound, looking for a softer and darker sound on the electric guitar has been a reference for many guitarists that came after and it is an intrinsic characteristic of what is recognized as a classic jazz guitar sound nowadays.

Montgomery also extensively used the octaves technique in which every note of the melody is doubled by its lower octave resulting in a more profound and orchestrated sound.

This technique was already used by Reinhardt, but he adopted it as one of his signature techniques.

The Incredible Jazz Guitar of Wes Montgomery is considered a highpoint recording and in 2017 was selected for the National Recording Registry by the Library of Congress as “culturally, historically or artistically significant.”

Its tracks exemplify Montgomery’s virtuosity and exceptional technique, and as critic Chris May of All About Jazz mentioned, “Montgomery had developed a revolutionary new approach to the instrument.”

Grant Green was an underrated player during his lifetime. However, he is one of the central players of post-bop jazz guitar.

He had prolifically recorded albums for the Blue Note Records label and played alongside renowned musicians such as McCoy Tyner and Elvin Jones – both from John Coltrane’s group.

In fact, in Matador, they are the rhythm section adding Bob Cranshaw on the double bass.

He has a clear clean sound and a remarkable technique that allows him to articulate long phrases making all notes even.

This shows how he was influenced, not just by his predecessor Charlie Christian, but also by bebop saxophone player Charlie Parker.

Steve Huey, in his All Music review, stated that “Matador is a cool-toned, straight-ahead modal workout that features some of Green’s most advanced improvisation…”

Joe Pass is perhaps the greatest reference for solo jazz guitar and Virtuoso is the album which made it so!

His impressive technique and improvisation dexterity allowed him to create arrangements of some well-known jazz standards using the chord melody technique in which the guitar functions as the leading and accompanying instrument at the same time.

Pass was able to improvise over the standards’ form with incredible fluidity making the guitar sound like an ensemble, playing the melody, the chords, melodic responses to the lead voice, and the rhythm section all at the same time.

All this without losing expressivity and originality.

He released the album Virtuoso in times of the rise of the electric rock guitar and jazz fusion.

As David Rickert of all About Jazz stated, “an entire album of [solo guitar] was almost unthinkable, yet Pass, who had singular notions of what could be done with the guitar, mastered it to wide acclaim. One of those landmark recordings that revolutionized the way an instrument was played.”

Jazz guitarist Jim Hall is considered one of the greatest players of all time on this instrument. He has been an influence on contemporary guitarists like Pat Metheny, John Scofield and even the young Julian Lage.

He has never been a virtuoso of the instrument but he impressed musicians and audiences with his musicality and smooth way of playing and improvising. His sound is soft, and light and his phrasing and expression are incomparable.

Jim Hall Live was recorded at the Bourbon Street Jazz Club in Toronto and it is a reference of the jazz guitar trio and a masterclass on how to play jazz standards.

This is an example of how the leading voice of the electric guitar is followed and developed in constant interaction with the rhythm section instruments – double bass and drums.

Scott Yanow of All Music stated, “the interplay between the three players is sometimes wondrous, and although the five selections (tracks) are all familiar standards … Hall makes the music sound fresh and full of subtleties.”

He started his career in England where he released Extrapolation, his first album as a bandleader.

However, he was recognised as a leading figure in jazz with his electric jazz fusion band Mahavishnu Orchestra and for his collaboration with Miles Davis.

McLaughlin is a remarkable jazz guitarist who can play surprisingly fast without missing expressivity. He was capable of developing a completely personal style without losing the roots of jazz, and his way of playing long and fast phrases is unmistakable.

Although Extrapolation is his first released album, it is possible to recognise his innovative view of jazz music at the time and identify how his music would become a game-changing factor in jazz history.

Quoting Walter Kolosky on All about Jazz, “Extrapolation was McLaughlin’s first album release as a leader, and it sounds as fresh today as it did way back in 1969.”

Pat Metheny is one of the most important modern jazz musicians. His music, which incorporates jazz, Latin jazz and fusion jazz is a reference for any guitarist and composer.

In Metheny’s music, is possible to find influences from all the guitar players mentioned before.

However, his playing and guitar sound are unique and show a thinking-forward attitude towards jazz style.

Bright Size Life’s importance in jazz history was recognised by the Library of Congress and was selected for preservation in the National Recording Registry in 2020.

In All Music, Richard S. Ginell mentioned that “Pat Metheny’s debut studio album is a good one, a trio date that finds him already laying down the distinctively cottony, slightly withdrawn tone and asymmetrical phrasing that would serve him well through most of the swerves in direction ahead.”

John Scofield is a reference of fusion jazz and particularly in the combination of jazz with blues, soul and funk music. He is well known for his slightly distorted “bluesy” sound and is one of the greatest modern jazz improvisers and composers.

He was an integral member of Miles Davis’ ensemble in the ‘80s, which placed him in the mainstream jazz scene. Nevertheless, he is a remarkable bandleader with an extensive discography.

A Go Go, is his first collaboration with the British groove jazz trio Medeski, Martin & Wood.

The groove and the interplay performed in this recording show how jazz is permeable style that allows musicians to discover new ways of making music without neglecting the founding elements of the genre.

Kurt Rosenwinkel (who we interviewed here) is one of the most important jazz musicians of contemporary jazz.

He took jazz guitar and composition to a new level regarding jazz as a musical element that could be combined with any other musical influences without limiting the artist’s creativity.

In his own words, “there is a place, musically, that’s above the categories. This record (Heartcore) – it’s jazz. And it’s much more.”

In “Heartcore,” an album co-produced with Q-Tip of hip-hop group A Tribe Called Quest, Rosenwinkel created a musical context in which jazz, rock, electronic – digital sampling and programming – and even classical music are blended in a unique compositional work.

In addition, the sound of his guitar is complex and extended with layers of effects and harmonic additions making the guitar lead role surprisingly versatile and rich.

In the words of Richard S. Ginell of All Music, Heartcore “is 21st-century expressionism of a sort, creating levels of ambiguity and uncertainty, leaving the listener out on a limb yet always intrigued.”

Of course, there are many more guitarists who’ve had an important role in the history of the jazz guitar.

Javier Subatin was born in Buenos Aires in 1985 before studying a bachelors degree in music in Europe. In the past years, he was selected to participate in various international contests and festivals such as the Montreux Jazz Guitar Competition 2015, Komeda Jazz Composers Competition 2017, the Euroradio Jazz Competition 2019 at the Copenhagen Jazz Festival, So What’s Next? Jazz Festival 2020, Südtirol Jazz Festival 2019 and Gaudeamus Music Week 2020.