The Most Famous Blues Musicians of All Time 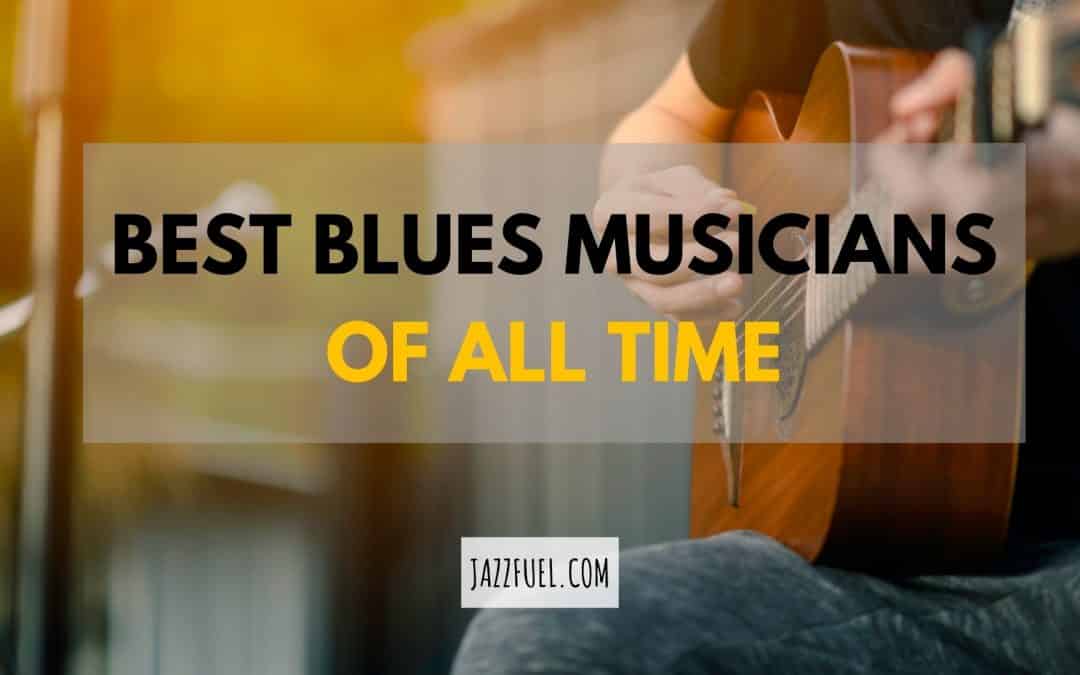 The best blues musicians in history have not only developed and refined a style loved by many around the world, they’re also responsible for the evolution of other genres such as jazz, soul, R&B and many more.

In this article, we’ve picked 11 of the most famous blues musicians of all time, from a range of styles including the original pioneers to more modern blues specialists.

Of course, there are many more we could have included, but these represent some of the biggest-selling and most talked-about artists in the genre.

Nicknamed the “Empress of the Blues“ Bessie Smith was born all the way back in 1894 and reached the peak of her success during the Jazz Age of the 1920s and 30s as one of the era’s most popular female blues singers.

She had a tough childhood; her parents died when she was very young and she was raised by her older sister in a life of poverty, during which she performed on street corners with her brother Clarence.

Bessie Smith formed her own group around 1913 at the 81 Theatre and first recorded in 1923 after garnering a strong reputation in the South.

Much to the surprise of the record labels who had rejected her due to her “rough” demeanour, Smith found massive success, with her stage presence and ability to enrapture her audience compared to that of a preacher.

She is best known for her deep vocal range and for songs including “Nobody Knows You When You’re Down and Out”, “Devil’s Gonna Git You”, and “‘Tain’t Nobody’s Bizness If I Do”.

Being the son of a sharecropper likely left Hooker with little to do, especially as he and his siblings were homeschooled and only allowed to listen to church songs.

That changed when Hooker’s parents separated, and his father figure was replaced with a blues singer, who introduced Hooker to the guitar.

Hooker soon developed a unique style, a combination of boogie-woogie that likely came from his time as an up and comer in Memphis, and an electric adaptation of perhaps the earliest form of blues music, The Delta blues.

This lent Hooker an authentic edge that separated him from the rest of the pack.

Supposedly trading his soul for his musical talent, and as legend has it, meeting his end to a poisoned bottle of whiskey, Robert Johnson is a bona fide blues legend.

Johnson’s 1936 and 1937 recordings, which later helped to inspire the British Blues Revival, are the only recordings Johnson ever made.

The recordings, comprised entirely of an acoustic guitar and vocal accompaniment, are a perfect display of Johnson’s talents. In particular are his standout tunes “Cross Road Blues”, and “Sweet Home Chicago”.

Koko Taylor incorporated elements from several sub-genres in her music, ranging from Chicago blues all the way to soul, despite her iconic rough-and-ready voice.

Taylor was known for her gritty yet powerful vocal style, which was full of raw emotion, but her vocal performances were rarely senseless screaming, and instead laden with quirky and talented vocal phrasing.

Taylor got her start in the late 1950s, like many, in Chicago’s blues clubs. It didn’t take long before she was discovered by Willie Dixon in 1962, which lead to more performances as well as her first recordings.

Taylor enjoyed some success until 1964, when her popularity skyrocketed with the song “Wang Dang Doodle”.

Taylor would later go on to greater success in the late 60s and early 70s, during which she toured the United States relentlessly, signed with Alligator Records in 1975, and went on to record nine albums for them.

Eight of those records went on to be nominated for Grammy awards.

Son House began as a preacher and church pastor. A surprise, then, that the common hostility toward the ‘devil’s music’ didn’t stop House from turning to the blues at the age of 25.

House picked up the guitar and took the vocal skills he had developed from preaching and applied them to the blues, resulting in an intense and tenacious vocal style.

With Patton behind him, House became a local sensation in Coahoma County, despite failing to achieve national success toward the start of the Great Depression, when his first recordings were released.

After a twenty-year hiatus from music, House was rediscovered in 1964 by young record collectors, who encouraged him to relearn his repertoire and reestablish his career, when he became a part of the American folk revival as a folk-blues singer.

Burnside lived quietly for most of his early life, dabbling in guitar from the age of 16 and learning how to play the harmonica. He has reportedly said that the first time he played publicly was between the ages of 21 and 22.

Burnside tried to make it in Chicago, where his father’s side of the family resided, even striking up a friendship with Muddy Waters, but things didn’t pan out.

Within a year, both his father, two brothers, and two uncles were murdered. Burnside soon left Chicago, having given up.

Burnside slowly built up a reputation between 1960 and 1990 as a part-time blues artist, also working as a sharecropper and a fisherman.

He was officially discovered by the journalist George Mitchell, who visited Burnside’s house to make his first recordings.

By the 90s, however, Burnside was playing alongside Jon Spencer of the Jon Spencer Blues Explosion, supporting the Beastie Boys (of all people), and even appearing as a musical guest on ‘Late Night with Conan O’Brien’.

Safe to say, Burnside’s legacy was cemented before his death, and went on to inspire many blues-rock artists, including the Black Keys’ Dan Auerbach.

Described by the Rock and Roll Hall of Fame as “arguably the greatest instrumentalist in the history of rock music”, it’s news to nobody that Hendrix was a hugely influential figure during his short but prominent career.

Hendrix took influence from electric blues and old school rock and roll, and combined those influences with highly overdriven amplifiers and wild effects that were abnormal at the time.

These effects included the [heavy] use of fuzz, wah-wah, a Uni-Vibe, and an Octavia.

Hendrix’s sound often included the use of phasing, and Hendrix also popularized the once-detested use of amplifier feedback by using it creatively.

The most famous example of this was Hendrix’s political statement at Woodstock, when Hendrix performed the USA’s National Anthem whilst mimicking the sounds of bombs dropping, screaming, and machine guns with his guitar.

It is perceived by many that this was a statement against the USA’s occupation of Vietnam.

Described by London in the famous graffiti, “Clapton is God”, Eric Clapton began his career with the Yardbirds in 1963 after playing in various local bands. He only remained with them until 1965 after they changed their sound from blues-rock to a more radio-friendly pop direction.

As a guitarist, Clapton took heavy influence from Chicago blues, which was being rediscovered in Britain at the time, specifically in London amid the Blues Revival.

The records coming into the country included Howlin’ Wolf, BB King, Freddie King, and Buddy Guy to name a few.

Clapton’s exposure to Chicago blues, alongside his early dedication to the guitar, helped him to create a distinctive and highly advanced style.

Clapton garnered a reputation at the Crawdaddy Club (famous for housing the Rolling Stones in their early days), where he also played with the Yardbirds.

Next, he departed from the Yardbirds to perform in several bands before landing on his feet as the lead guitarist of Cream, where he would begin to become a legend.

After having a hand in Cream’s biggest hits, “Sunshine of Your Love”, “White Room”, and “I Feel Free”, Clapton formed Derek and The Dominos and eventually went on to a prolific and more folk/country direction, whilst still retaining his bluesy style.

Born in 1918 and known primarily as the “King of the Slide Guitar”, Elmore James was famous for his aforementioned use of the slide guitar, a cranked-up amplifier, and a warbling, soulful voice.

James soon began to perform with his band, the Broomdusters, and began working with Sonny Boy Williamson II in the late 30s before his stint in the United States Navy during World War 2.

Upon his return, James began working in his adopted brother’s electrical shop, where he used parts from the shop as well as two DeArmond pickups to create a unique guitar (a modified hollow-body acoustic guitar).

In 1992, James was inducted into the Rock and Roll Hall of Fame. His most prominent tunes include “The Sky Is Crying”, “Dust My Broom”, and “Shake Your Money Maker.”

Famous for his tireless touring (reportedly playing over three hundred shows in 1956 alone), and his smooth and slick style, B.B. King began his early career on Beale Street in the early 50s.

He quickly rose to prominence for his bellowing vocals and precise and deliberate guitar playing, which often featured a plethora of vibrato.

Most impressively, at one show in Arkansas, after a fire broke out, King was said to have ran back into the burning building to retrieve his guitar.

After managing to evacuate the building a second time, this time with his guitar in tow, the first thing he saw was two men arguing over a woman named Lucille, whom he decided to name his guitar after.

Among King’s many standout songs are “The Thrill Is Gone”, and “Chains And Things”.

Born in 1910 under the name Chester Burnett, and known rival to the equally famous Muddy Waters, was a blues-rock guitarist and vocalist that rose to prominence in Chicago in the 1950s.

Additionally, he was active as a performer during the 30s and 40s after he was taught how to play guitar and harmonica by some of the best bluesmen at the time (Charley Patton taught him the guitar, and Sonny Boy Williamson II the harmonica).

Wolf caught his break when he recorded for Sam Phillips at Memphis Recording Service, which would later become the famous Sun Studio, as well as the HQ of the record-label-to-be, Sun Records.

However, as Sun Records had yet to be formed, Phillips licensed the recording to Chess Records, a prominent Chicago label that specialised in blues.

Burnett supposedly got his name from squeezing his grandmother’s chicks too hard, and killing them.

Burnett’s grandfather scolded him for this, warning him that the wolves would come and get him if he continued, leading to his family dubbing him as “Burnett “The Wolf.”

Among Howlin’ Wolf’s standout tunes are “Smokestack Lightnin’”, “Spoonful”, and “Killing Floor”, all of which have become popular blues-rock standards.

Of course, whilst there’s no doubt that these musicians played a huge part in either the pioneering of blues music, its evolution, or its revival, they do not represent the full extent of the blues.

There are many great players out there, and a top 10 list is simply not enough to comprise them all. But for someone looking to get into the blues, these artists provide a great place to start.

I strongly encourage you to explore the rest that this expressive genre has to offer!