10 of the Best Jazz History Books of All Time 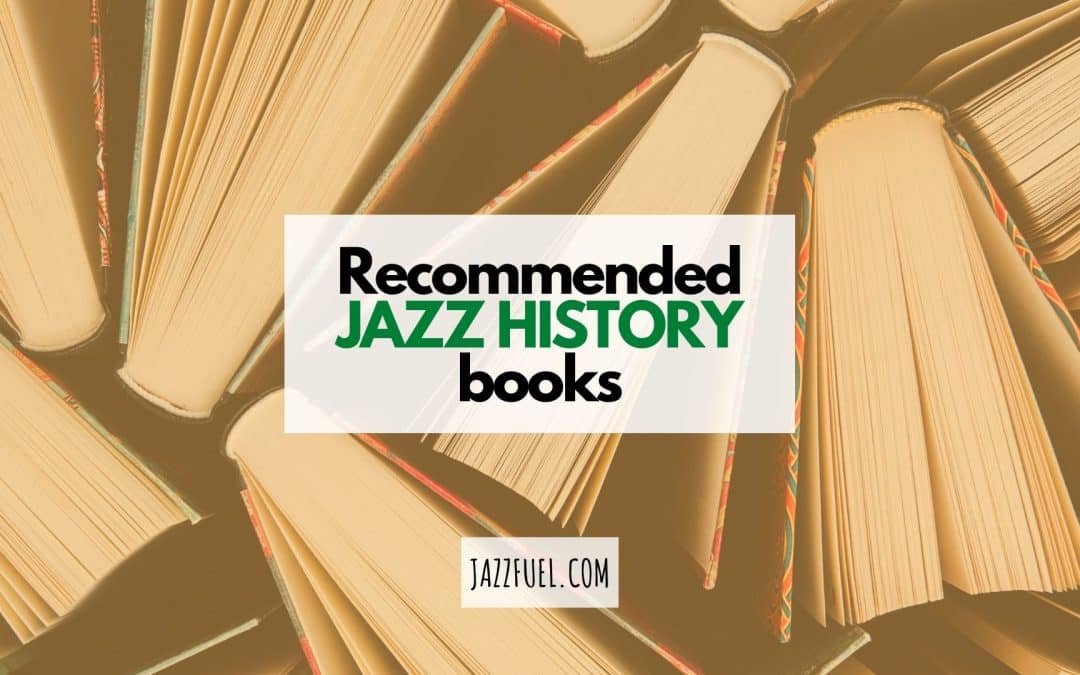 This post may contain affiliate links. Info here.
Great jazz music didn’t appear in a vacuum and in this article we’ve picked 10 books which allow the reader to get deeper into jazz history. The goal? To discover the people and the situations which led to the evolution of the music we love.

Whether you’re an artist, fan or just starting to learn an instrument, a lot of focus is (of course) on listening to or playing jazz.

But getting to know the history of the music gives it context and brings the people who made it to life.

In fact, almost any question you have about jazz instruments, styles or trends can be found in stories from the past.

It can also be starkly revealing for a lot of modern music which purports to be ‘cutting edge’ that many of the hippest trends can be found in recordings from way back, if you know where to look!
Before we dive into the details, let’s look at our top 3 jazz history books:

So, without any further ado, here’s our run down of 10 incredibly insightful jazz history books which might deserve a place on your reading list…

Best known as the French horn player on Miles Davis’ The Birth of The Cool, Gunther Schuller had a varied career as a performer, conductor, composer and academic.

Schuller’s book on early jazz is thoroughly researched and details the genre’s beginnings and transformations in the ’20s.

His second volume covers jazz up until the mid-forties, and the reader is given a sense of the painstakingly methodical approach in the preface: we are told he listened to over 30,000 recordings in compiling the book.

Musically notated examples and discographies make these publications essential reading for anyone wishing to study jazz in its youth in fine detail.

Bebop: The Music and Its Players (Thomas Owens)

Thomas Owens describes the defining characteristics of bebop vocabulary as they are distinctive from the styles which came before and after, as well as the individual approaches of bebop’s significant players.

The book is organised by instrument group, after a prehistory of the style and discussion of bebop’s most eminent exponent, Charlie Parker.

This configuration leads to many discussions about musical roles and techniques often missing in books of its kind, such as the evolving responsibilities of drummers and bass players.

Complementing this close examination of the period is a slew of notated examples (often with functional analysis) and there are frequent lists of recorded examples for further study.

Exploring jazz history through a lens other than style, instrument or chronology can shed new light on what we think we know about the music and its contributors.

This account of the record company which issued some of jazz’s most important albums is principally about the music released.

However, it also examines the overall design and artwork of the record sleeves and how these aspects contributed to a recognisable brand still much-loved today.

Richard Cook, clearly a fan of the label, gives Blue Note a cultural context without falling into the trap of stringing together a succession of record reviews.

Jazz enthusiasts, no doubt possessing many of the discussed albums in their collection, will consume this book with gusto.

This book is the accompanying catalogue to a 2012–13 exhibition about ECM Records shown in Munich. It is an anthology of essays, interviews, photographs, film stills and album artwork bound together in an edition as impeccable as the label’s aesthetic.

Although the book usefully contains a chronology, discography and history of ECM, its key value lies in pulling the curtain back on the elusive nature of the organisation and its processes.

Intimate portrayals of its artists often show a side hitherto unseen in the jazz press and serve to soften the somewhat austere public image of the label.

Well worth having in your collection, it will make you wish you attended the exhibition yourself!

Swing to Bop: An Oral History of The Transition in Jazz in The 1940s (Ira Gitler)

The differences between Benny Goodman in the late ’30s and Charlie Parker in the early ’40s are stark.

It can often seem like bebop came from another planet, and it’s challenging to hear the links between the two styles.

This compendium of interviews is presented as a narrative which takes the reader smoothly from jazz as popular music to jazz as elitist clique.

Although there are no musically notated examples, there is plenty of anecdotal information regarding the players’ thoughts and techniques.

Ira Gitler was a renowned journalist, historian and writer of liner notes.

His considerable reach into the jazz community is evident here: the list of people consulted includes everyone from Jay McShann to Gerry Mulligan.

Hear Me Talkin’ to Ya, The Story of Jazz as Told By The Men Who Made It (Nat Shapiro and Nat Hentoff)

Musicians are not normally well-known for writing treatises which give a full picture of their methods and worldview and they more often require a friendly interviewer to extract their story and arrange it as a chronicle.

Few writers in the ’50s could have handled the artists quizzed in this book more delicately than columnists and jazz historians Nat Shapiro and Nat Hentoff.

Jazz history is littered with apocrypha and hearing the facts from the horses’ mouths is more useful than an academic’s distillation and interpretation of the events.

The voices transcribed here are allowed to retain their personalities, and the strong characters which shine through make for an entertaining and unforgettable read.

Other than jazz-fan journalists, only a fellow practitioner could lend a more sympathetic ear to the tales told by musicians.

Artists tend to have a public persona for the press which is not representative of how they actually talk amongst themselves.

These conversations conducted by drummer Art Taylor between 1968 and 1972 are candid and reveal much about the social dynamics and struggles of the time.

Some of the views expressed are controversial and shocking, but nonetheless vital to understanding the individuals involved.

Reading Jazz: A Gathering of Autobiography, Reportage and Criticism from 1919 to Now (ed. Robert Gottlieb)

Robert Gottlieb has set himself the task of not only uncovering jazz history but also the history of jazz writing.

Organised into autobiography, reportage and criticism, this book is composed of sources both in and out of print at the time of its publication.

Furthermore, these pieces provide insights into the history of the music and its musicians Their inclusion also reflects the editor’s goal of answering big questions such as what jazz is, and how it fits into the world around it.

For the music student as well as the music fan, this work is indispensable for those wishing to round out their jazz reading experience.

Rather than curating a compilation of materials of various authorship, Gary Giddens has used his own columns as a springboard for this collection.

Grouped into themes universal in art, Giddens has a fresh spin on jazz’s evolution while avoiding the historian’s trope of chronology.

Like Reading Jazz, this is a text meant for dipping into rather than reading from cover to cover.

The writing is dense, and Giddens’ awareness of music theory may leave some out in the cold. Even so, it contains a wealth of knowledge and is a valuable supplement to a would-be jazz historian’s education.

Thanks for reading and let us know how you get on with these great jazz history books. If you’re looking to discover more great jazz stories, you can check out our round up of the best jazz biographies or best jazz documentaries.