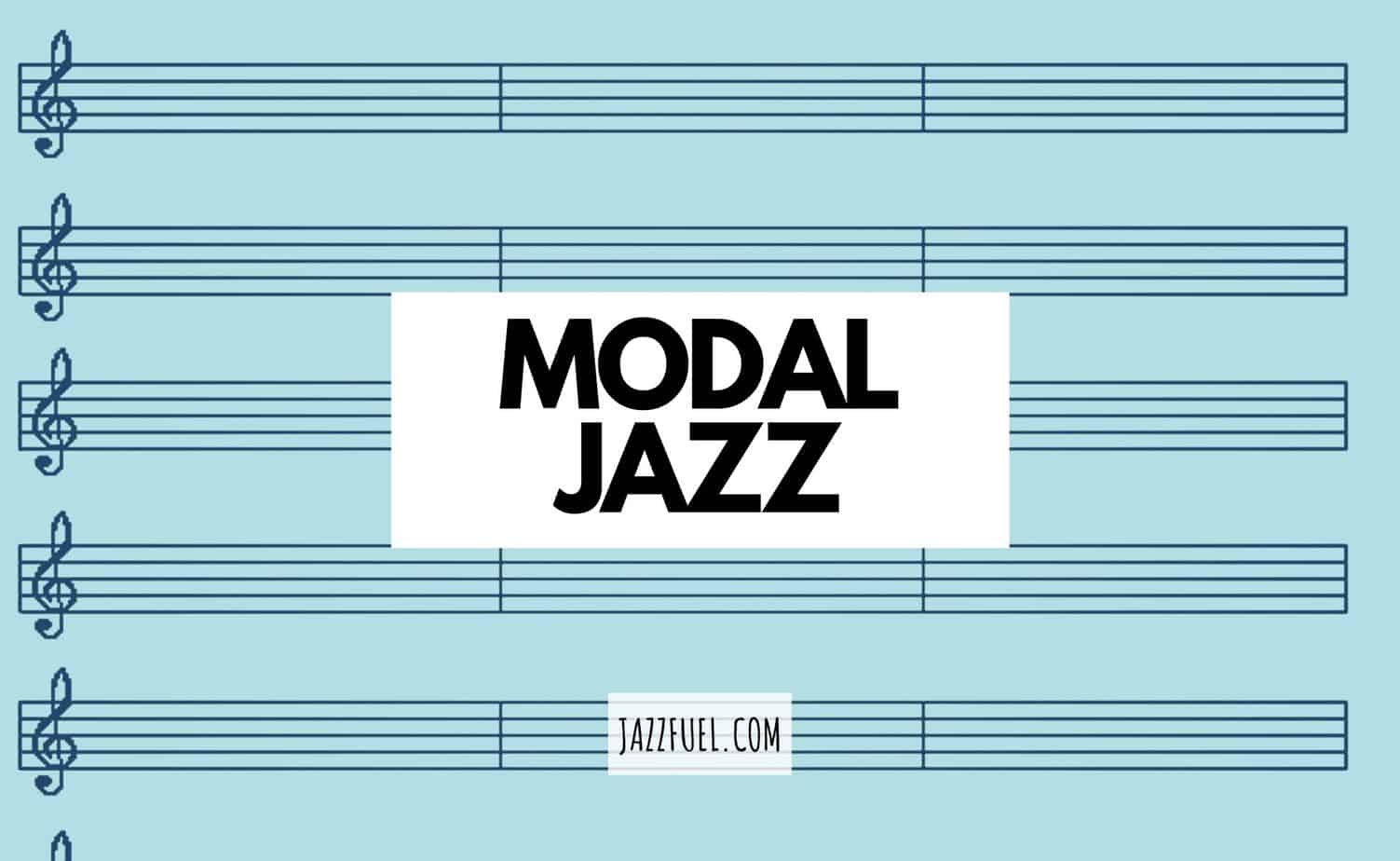 Modal jazz emerged in the late 1950s as musicians began to seek alternatives to the ‘functional’ harmony that had dominated all of jazz up until that point.

In this article, we’ve highlighted some of the most important modal jazz artists of the time, and a recommended album to check out.

Western harmony traditionally relies upon a tonal key centre with related chords and cadences – the perfect, or V-I cadence, being the most obvious example.

This led to a situation in jazz where some players were tired of what they felt had become a stale bebop and hard bop orthodoxy, where improvisers played the same selection of licks over the same few cadences and chord sequences.

Inspired by the theoretical work of George Russell and also by 20th Century classical composers like Maurice Ravel and Claude Debussy, jazz composers began to write pieces that rejected functional harmony, which in turn forced performers to improvise over them in different ways.

Modal harmony takes a chord and corresponding scale (or mode), where it may remain for some time or move to another, possibly unrelated mode. The most famous examples of this tend to stay on one chord for extended periods, but during the 1960s we start to see pieces with ‘non-functional harmony’ that move more quickly between chords and corresponding scales in sometimes surprising ways.

Nowadays, most new jazz compositions will use elements or techniques related to modal jazz. Back in the late 1950s, it was revolutionary!

So anyway, here’s our list of some of the best modal jazz musicians and albums of all time.

All of these players pioneered the approach in some way, although, of course, they all played other styles as well. Many of them made albums that place modal tunes alongside more traditional repertoire – it’s actually quite rare to find an album where every tune could be considered a modal jazz composition – while some compositions even veer between functional and non-functional harmony.

Miles was a relentless innovator who was a key player in so many seismic shifts in the jazz world.

He had already played in classic bebop, cool jazz and hard bop bands when, in the late 1950s, he began to experiment with more static harmonic material, which stayed on one chord for long periods.

The most famous example is ‘So What’ from Kind of Blue, which utilises his understated, mid-register trumpet sound to brilliant effect in one of his best-loved solos.

Like many classic standards and songbook tunes, the composition uses a 32 bar, AABA structure, but the A sections use a D minor seventh sound, and the dorian mode, while the B section goes up a semitone to E flat dorian.

You certainly can’t use your trusty II-V-I licks on this one!

Kind of Blue is more famous, but Miles’ previous album, from 1958, actually contains his first foray into modal music. The title track, not to be confused with an earlier dense bebop tune of the same name, comprises long stretches of dorian and aeolian harmony.

Russell is an interesting figure: he played the piano, but is better known as an arranger and jazz composer.

In fact, on recordings under his own name he would often let someone else (often Bill Evans on his early albums) take the piano chair so that he could focus on directing the band.

He is also not really associated with the scene of 1960s musicians that most people consider the most important contributors to the development of modal jazz.

But Russell is an important figure in jazz history: his book Lydian Chromatic Concept of Tonal Organisation (1953) codified the modal (or scale-based) approach to harmony, and influenced the thinking of players like Miles Davis, Bill Evans and John Coltrane.

It also impacted the first generation of American musicians who started to formalise jazz education, like David Baker and subsequently Jamey Aebersold, so if you’ve studied jazz at a conservatory, there’s a good chance that the content of the course was influenced by Russell’s work.

Russell plays piano on this sextet album from 1961. His composition ‘Lydiot’ contains long stretches of dominant chords with a raised fourth (hence the title’s reference to the lydian mode). 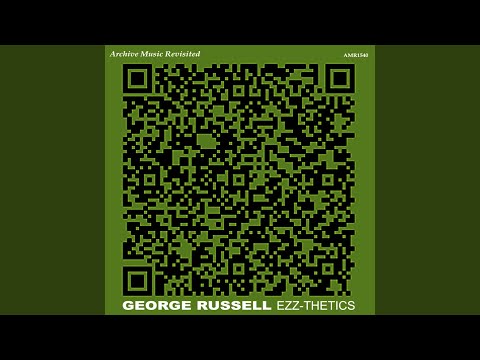 Bill Evans’ piano playing married the influence of beboppers like Bud Powell with an introspective impressionism.

Although he continued to play classic standard material with functional harmony throughout his career, he was a key contributor to Miles Davis’ genre-defining Kind of Blue, with most experts agreeing that he at least co-wrote the ballad ‘Blue in Green’, which makes liberal use of the lydian mode – even though Miles took official credit.

The tune ‘Walking Up’, with its strings of parallel major seventh chords, is a good example. ‘Peace Piece’ from Everybody Digs Bill Evans is another interesting case study: its gentle solo piano mood is a far cry from the raucous exploration of the Coltrane quartet, for example, but with Evans improvising softly within a set tonality, it is certainly a kind of modal jazz.

The rest of this live album is based on more standard harmonic material, but ‘Milestones’ sees him offering a more conversational, interactive take on Miles Davis’ modal jazz classic with his famed trio featuring Scott LaFaro and Paul Motian.

But during the mid-1960s, on his own albums for Blue Note and as a member of Miles Davis’ Second Great Quintet, Hancock’s sophisticated harmonic concept was at the forefront of the modal movement.

The tune ‘Cantaloupe Island’, from Empyrean Isles, adds a funky twist to a modal harmonic landscape.

Hancock’s Blue Note masterpiece Maiden Voyage has a nautical theme. The static harmony of the title track brings to mind the open seas, whilst ‘Dolphin Dance’ combines standard II-V-I cadences with surprising non-functional movements, including use of the mysterious harmonic major scale. 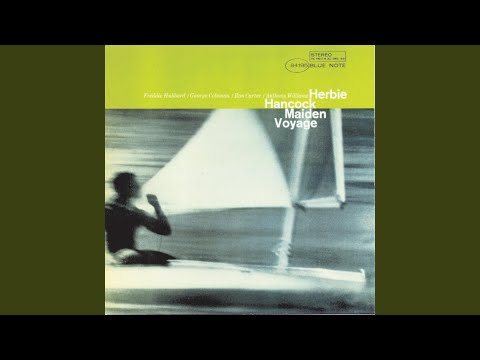 Wayne Shorter is one of jazz’s most recorded composers and, like Hancock, was a member of Miles Davis’ Second Great Quintet.

His saxophone playing and compositional skills first came to prominence during his stint with Art Blakey and the Jazz Messengers, the great hard bop talent factory, but he is perhaps most celebrated for his slightly more left-field efforts for Blue Note in the 1960s, which spotlight his imaginative modal jazz tunes.

Interestingly, the members of the rhythm section on this 1965 effort – McCoy Tyner, Reggie Workman and Elvin Jones – had all played together in an early edition of John Coltrane’s classic quartet.

The title track features Debussy-esque whole tone sounds, while ‘Yes or No’ contains a mixture of static modal harmony and faster-moving cadences.

His own mid ‘60s Blue Note albums tend towards a modal direction, as the title of 1966’s Mode For Joe suggests, although they always retain elements of hard bop and the blues.

Henderson synthesised the influences of Charlie Parker, Lester Young, Sonny Rollins and others to create a sound that was all his own, and was comfortable playing with intensity over static modal harmony, or threading intricate lines through bebop-style changes.

‘Inner Urge’ has become a jazz standard and is Henderson’s most famous composition.

Beginning with a locrian sound, each following lydian chord is held for four bars, before a faster moving sequence of major seventh chords towards the end. ‘El Barrio’ is a brooding, Spanish-tinged piece that uses two scales, and the album finishes with a reharmonised version of the Cole Porter standard ‘Night and Day’.

Coltrane played on Miles Davis’ early modal explorations Milestones and Kind of Blue, although he had also experimented with dense functional harmony around the same time: tunes like ‘Giant Steps’ and ‘Countdown’ are almost the opposite of modal jazz, with their relentless cadences through unexpected key centres.

Coltrane still sets the standard when it comes to the ability to generate intensity and wring every single possibility out of a single chord, although the band also applied this approach to songbook standards like ‘My Favourite Things’ and ‘Softly As In A Morning Sunrise’.

Coltrane’s 1964 masterpiece comprises a passionate four-part suite and is considered one of the greatest jazz albums ever. 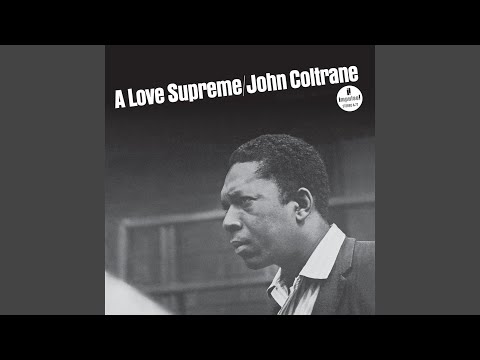 McCoy Tyner’s idiosyncratic language had a huge impact upon the jazz piano world, although he is still arguably underrated in this regard.

He was key to the identity of John Coltrane’s classic 1960s quartet, and also released essential albums of his own. The sound of his thunderous left hand followed by a chord built upon a stack of fourths is hugely distinctive.

He recorded jazz standards too, as on the excellent trio record Reaching Fourth, but his exploratory style and modern concept made his playing the perfect fit for the modal movement of the 1960s and beyond.

Tyner’s Blue Note debut features an all-star band with Joe Henderson on tenor, Ron Carter on bass and Elvin Jones, McCoy’s colleague from the Coltrane quartet, at the drums.

‘Passion Dance’ is a modal jazz classic, and the pianist’s solo is a masterclass in approaching static harmony, employing techniques such as inside-outside playing.

Shaw was a major innovator in the jazz trumpet lineage.

Musicians have used various techniques to create interest when playing over static harmony, and Shaw was particularly noted for his striking use of wide intervals and for his application of patterns and pentatonic shapes.

After a stint with Horace Silver’s hard bop outfit in the late 1960s, he continued to play largely acoustic straight ahead jazz with a strong modal flavour through the 1970s, a time when many major musicians on the scene were embracing fusion and jazz rock.

A virtuosic technician, he was also famed for his perfect pitch and photographic memory.

This 1977 album features Shaw in a sextet that also includes Joe Henderson on tenor saxophone. 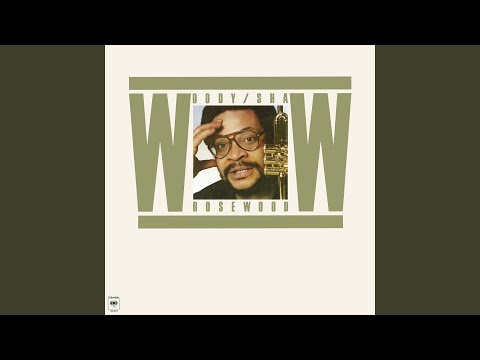 Like George Russell, Evans played piano but is better known as a jazz arranger and composer.

In the late 1950s and early ‘60s the pair worked together again on a series of large ensemble albums which hinted at Russell’s harmonic ideas, and applied some of the modal techniques heard on Kind of Blue on a larger scale, although none of these records could be characterised purely as modal jazz.

Sketches of Spain contains some extended sections of Latin-tinged scalic improvisation, and when discussing Porgy and Bess, Davis said:

“When Gil wrote the arrangement of ‘I Loves You, Porgy,’ he only wrote a scale for me. No chords… gives you a lot more freedom and space to hear things… there will be fewer chords but infinite possibilities as to what to do with them. Classical composers have been writing this way for years, but jazz musicians seldom have.”

‘The Time of the Barracudas’ is a kind of sophisticated big band take on modal jazz, and features a great solo by Wayne Shorter, backed by ferocious drumming from Elvin Jones.

So that’s it: 10 of the best modal jazz artists in history – and some recommended listening for each! I hope this has helped you discover some more great music – or reminded you of some albums you haven’t checked out in a while.

As with all our ‘Discover Jazz‘ articles, we’ll be adding more in due course, so please feel free to add suggestions in the comments section below.

Until then, you can read more about the other types of jazz out there…