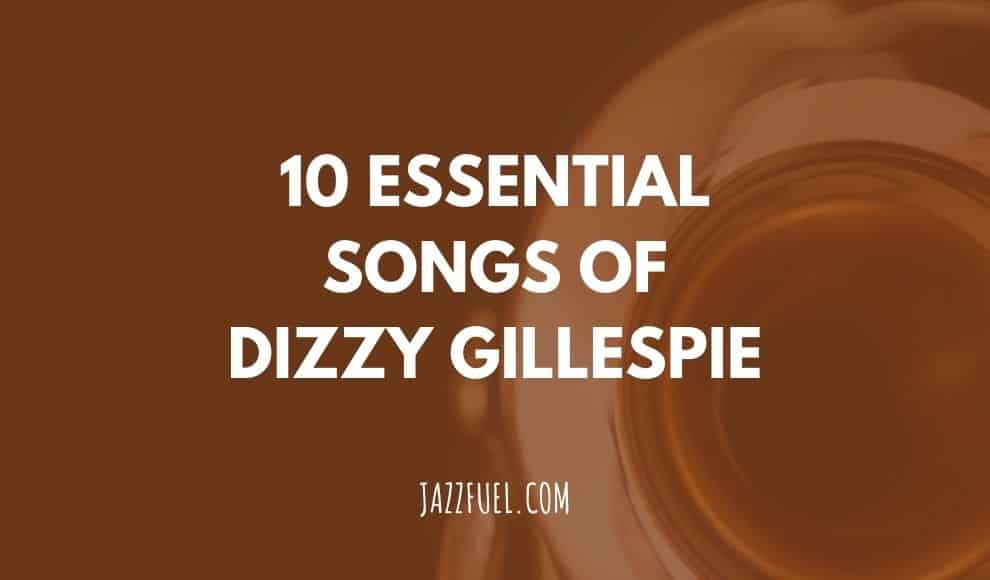 With his inflated cheeks and bent horn, trumpeter Dizzy Gillespie’s pivotal role in the invention of bebop and the composing of some of the best jazz songs of all time makes his name synonymous with the form.

And, like many of the truly great musicians, his influence was not just felt in one specific style of jazz; he was also one of the founding fathers of the Afro-Cuban jazz tradition and also pioneered the modern big band format long after the swing era ended.

For such an acclaimed musician, we’ve set ourselves a tough task: to highlight 10 of the best Dizzy Gillespie songs and performances, with some recommended listening for each.

You’ll find those (in reverse order…) below, followed by some more info about Dizzy, including the story behind that famous bent trumpet..! 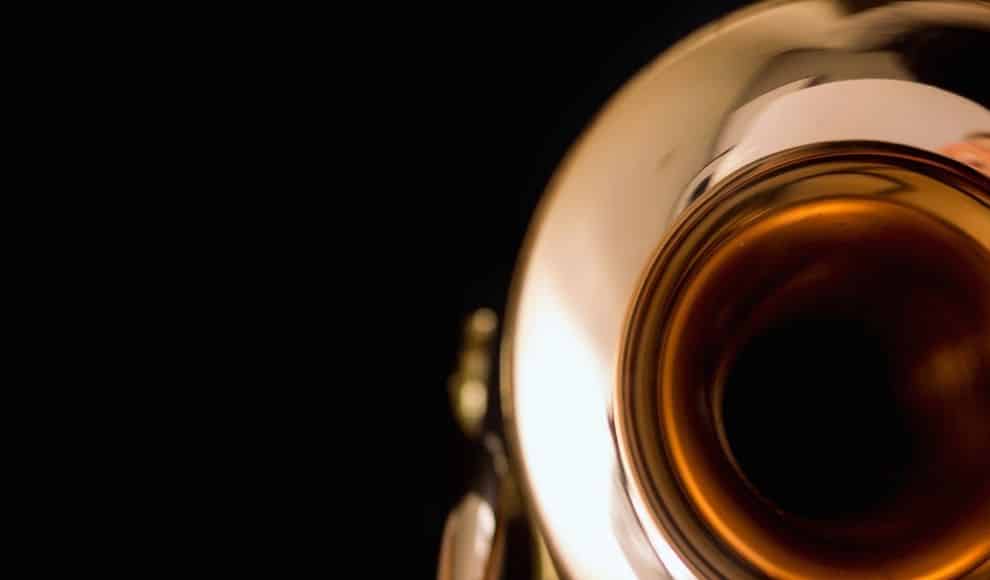 Gillespie joined bandleader Cab Calloway’s orchestra in 1939, and recorded ‘Pickin’ the Cabbage’ (one of his earliest compositions) in 1940.

Though he lasted less than two years, it remains an important chapter in his musical life, and it was during this this time that Gillespie would start writing big band music for the likes of Woody Herman and the Dorsey brothers.

It is said that Calloway had always disapproved of Gillespie’s mischievous antics and adventurous soloing style (a style that Gillespie would develop further in the 1940’s), and was viewed as being too far removed from such swing-era giants as Roy Eldridge and Louis Armstrong.

After refusing to take the blame for throwing a spitball in a rehearsal, Gillespie stabbed Calloway in the thigh with a pocket knife and was subsequently dismissed from the band. 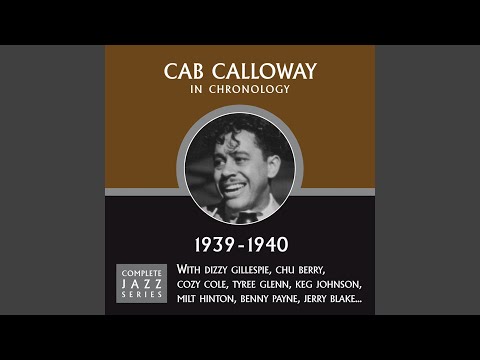 9. Disorder at the Border

Written by tenor giant Coleman Hawkins, ‘Disorder at the Border’ features a young Dizzy Gillespie and is credited as being among the first ever recorded examples of bebop.

Hawkins was renowned for hiring young and exciting pioneers, with the likes of Gillespie, Max Roach and Thelonious Monk passing through his band, one of the first swing-era greats to embrace the fresh new sounds of these new young lions.

The session also yielded a premiere of Gillespie’s ‘Woody ‘N You’ (one of his most enduring compositions) and Budd Johnson’s ‘Bu-Dee-Daht’.

Whilst Gillespie’s progressive and daring improvisations on ‘Disorder at the Border’ drew some criticism at the time, it remains an important recording from a time of transition in jazz and a great example of Gillespie’s developing style in the early 1940’s.

Widely regarded as one of the great ‘jam session’ records of all time, Gillespie’s idea of placing tenor titans Sonny Stitt and Sonny Rollins alongside each other was a master stroke.

Sparks fly throughout the record, though perhaps none more so than on Stitt’s ‘The Eternal Triangle’, with all three frontline musicians on scintillating form.

The story goes that in the run up to the recording session band-leader Gillespie provoked the tenor men over the phone by telling stories about Rollins to Stitt, and stories about Stitt to Rollins, lending the date a competitive fire that is audible to the listener.

Not content to be playing trumpet and leading bands, Dizzy also made use of scat singing in jazz.

His 1942 composition Salt Peanuts is a great showcase of this, with the bandleader’s improvised lines punctuated by the cry of “salt peanuts!”

As with many jazz standards of the bebop period, this is a contrafact; a brand new melody written over an existing song (I Got Rhythm in this case)

There are a wealth of great versions of this song to check, but our top recommendation is one of the originals: in quintet with Charlie Parker on Groovin’ High.

After his seminal recordings with Parker, Gillespie would go on to lead other small combos, before starting to put together successful big bands from 1947.

Aiming to introduce the energy and harmonic complexity of bebop to an enlarged format, the big band recordings form a noteworthy part of the Dizzy Gillespie discography.

Though by the 1950’s it was becoming harder and harder for many big bands to continue touring, Gillespie would persevere, and this 1957 recording of original composition ‘Birks Works’ (a reference to his full name John Birks ‘Dizzy’ Gillespie) finds the band on sparkling form.

Featuring the likes of Benny Golson, Lee Morgan and Wynton Kelly (all fine bandleaders in their own right), it’s a great example of Gillespie’s big band in its prime.

Fans of John Coltrane can also dig out an excellent version of Birks Works on 16-track set The Complete Recordings with Dizzy Gillespie. 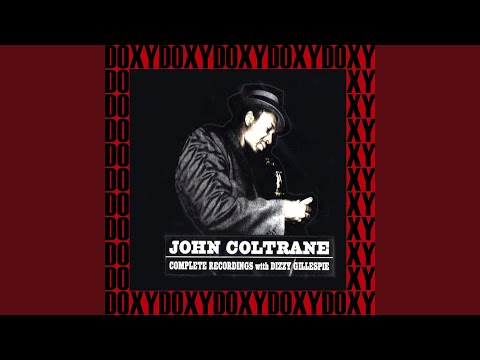 Groovin’ High is another composition by the American jazz trumpet player, first recorded in 1945 with Dexter Gordon, based on the pre-existing chord changes to ‘Whispering’, a huge hit for the Paul Whiteman Orchestra in 1920.

The trumpeter’s stop-start melody which pairs short staccato statements with long chromatic phrases became something of an anthem for bebop musicians, with Gillespie going on to perform it throughout his career as one of his signature pieces, including at the White House in 1982 as part of a jazz gala event.

Whilst there are dozens of brilliant recorded examples of ‘Groovin’ High’ we particularly recommend Gillespie’s 1945 recording with Charlie Parker.

Whilst Gillespie would frequently borrow pre-existing chord changes from older songs for his own compositions (‘Groovin’ High’ being based on ‘Whispering’ and ‘Dizzy Atmosphere’ being based on Gershwin’s ‘I Got Rhythm’), ‘Con Alma’ follows no such trend, and is among Gillespie’s finest works.

A sophisticated and subtle composition, (the melody line in the ‘A’ section is primarily constructed from repeated half notes) Gillespie makes ingenious use of a descending bassline in his chord sequence, and changes in texture between the ‘A’ and ‘B’ sections.

Check out his debut recording of ‘Con Alma’ in 1954 where the Latin groove is particularly dominant, and then compare it to his recording with Sonny Stitt three years later which places far greater emphasis on the soloist.

Some of Gillespie’s finest work from the 1960’s can be found on his popular disc ‘Dizzy on the French Riviera’ recorded in France in 1962.

His rendition of Jobim’s ‘No More Blues’ ably accompanied by an all-star band from all corners of the world, begins with the sounds of children having fun by the ocean.

It complements the mood of the album perfectly, as Gillespie and alto saxophonist Leo Wright playfully trade over the melody in a relaxed manner.

The rest of the album is just as strong, with Gillespie’s ‘Here It Is’ (a catchy shuffling blues) also being a highlight.

Frequently cited as one of the first modern jazz musicians to acknowledge and celebrate the strong influence of Latin and Caribbean folk music on jazz, Gillespie’s heavy involvement with the Afro Cuban jazz movement of the 1940’s is a hugely significant part of his life in music.

His 1947 recording of original composition ‘Manteca’, co-written with Cuban percussionist Chano Pozo has been described as ‘one of the most important records ever made in the United States’ (Garry Giddins, The Village Voice) and is believed to be the first composition based on the clave (an important rhythmic pattern used in Afro-Cuban music) to become a jazz standard.

It features the two musicians alongside Gillespie’s big band, and remained one of Gillespie’s most popular compositions throughout his long and varied career.

1. A Night in Tunisia

Undoubtedly Gillespie’s most iconic composition, ‘A Night in Tunisia’ was written in the early 1940’s during a stint with Benny Carter’s band at Kelly’s Stables on 52nd street.

Whilst the earliest recordings of the song did not indicate how successful it would eventually become (Sarah Vaughan was the first to record it under the title ‘Interlude’), the trumpeter’s live renditions with Charlie Parker, (captured on ‘Jazz at Massey Hall’ and their 1947 concert at Carnegie Hall) would cement its place as one of the most enduring jazz standards of all time. 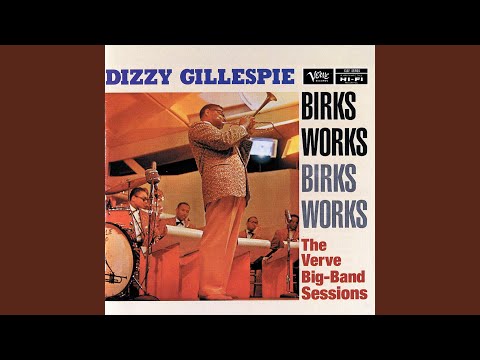 The legendary jazz trumpet player was born in South Carolina in 1917 as the youngest of 9 children and, with a bandleader as a father, was playing from the age of four.

With Roy Eldridge as an early idol, he went on to study music on a scholarship before picking up his first professional gig playing with the Frank Fairfax Orchestra in 1935.

From there, he graduated to performing with many of the most respected musicians of the day, as well as writing and arranging for his own groups.

So here are 10 of the most essential Dizzy Gillespie tracks to check out….

“Bebop” as the new style would be called, brought a radical shift in jazz away from swing and toward a new frontier of experimentation. Gillespie and Parker worked out these experiments in “small combo” bands of five musicians. Gillespie kept writing, with his song “Woody n’ You” being the first recorded bebop track of all time.

If you’ve read this far, we’re going to assume you know which jazz musician was known for playing a bent trumpet?

Many of the most iconic images of Dizzy Gillespie show him playing his trademark trumpet, with the bell bent upwards at a 45 degree angle.

He didn’t acquire this until 1953, though, when a guest at a party for his wife accidentally sat on his trumpet, bending the bell upward.

Dizzy discovered that he preferred the sound after the accident and so had bespoke trumpets made from there on out with the distinctive style.

The trumpet was acquired by the Smithsonian Institute in 1985, as explained by music curator John Edward Hasse who wrote a letter to Gillespie’s wife proposing the idea.

“Four days after sending the letter, this great big box arrives at the museum by UPS! In it is his trumpet and a specially built trumpet case to accommodate this unusual shape, with travel stickers from France and various parts of the world. I could hardly believe it.”

Dizzy became a celebrity figure for his unique look and crooked trumpet, not to mention his unparalleled playing and creative output.

He ran as a write-in candidate for president in 1964 on a platform of renaming the White House to the Blues House and nominating a retinue of jazz greats to cabinet positions with Malcom X as the Attorney General.

Proceeds from sales of his campaign pins went to the Southern Christian Leadership Conference, Martin Luther King, Jr., and the Congress for Racial Equality. He also converted to the Baháʼí Faith, becoming a notable figure in the small religion.

He continued to play and record through the century, even leading the United Nations Orchestra during the eighties.

As with many of the jazz greats, there some great quotes atrributed to him.

This one is particularly insightful for the developing jazz student when thinking about space and control:

It was in 1991 that his long career of live performances ended when he was diagnosed with pancreatic cancer. In early 1992, he made his final recording. Nearly one year later, in January of 1993, he died.

The jazz world owes an incredible debt to the genius of Dizzy Gillespie.

The music he left behind with us is some of the best to ever be carved into wax. And so it seems that the dream of a boy growing up in South Carolina listening to swing on the radio really did come true.