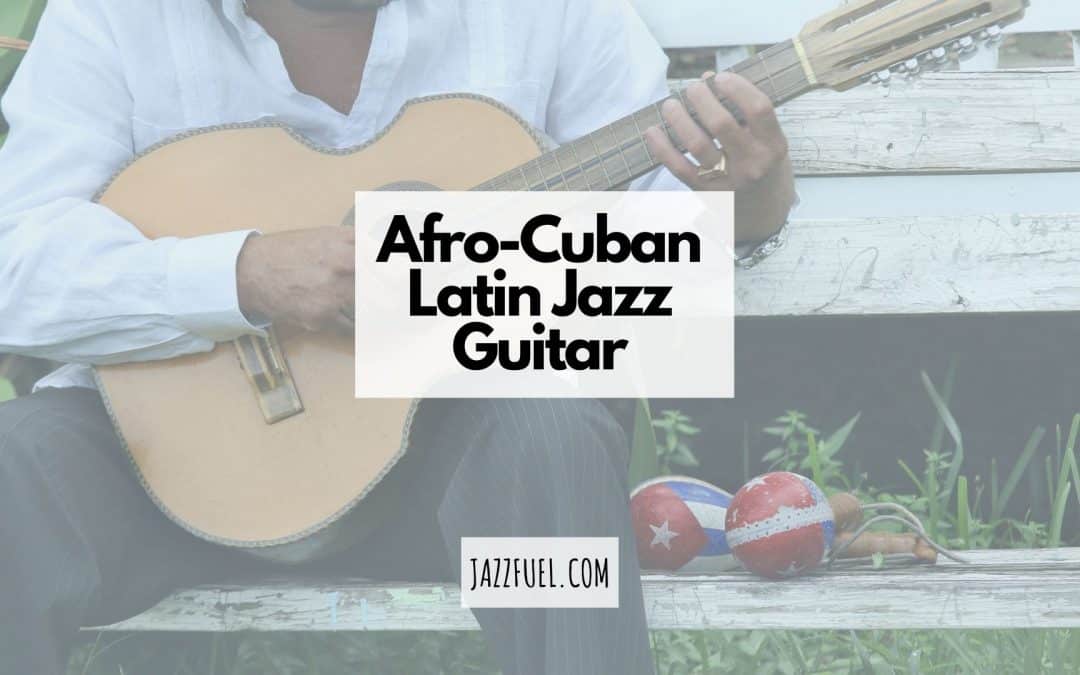 The guitar is no stranger to Latin music and, as part of our series on the different types of jazz, we’re diving into some of the key players and albums who popularised the Afro-Cuban side of Latin Jazz.

Much has been written, recorded and documented about the guitar’s evolution in the Latin Jazz style which came out of Brazil.

But whilst there remains a wealth of recordings that demonstrate the Afro-Cuban / Puerto Rican side of this music, it’s influence can be sometimes forgotten by the mainstream Latin Jazz audience.

We’ve picked a selection of Afro-Cuban jazz recordings which provide great insight into the guitarists, bandleaders, composers and arrangers who pioneered the instrument’s role within the style.

Traditionally in Latin America the guitar accompanied the tres, cuatro and requinto to provide harmonic, melodic, and rhythmic support. Its link to these musical cousins, as well as its unique sonorities, make the guitar an excitingly fresh sound in Latin Jazz music which is so often dominated by piano.

Each of these albums were chosen not just for their beautiful sounds, but for their exceptional portrayal of some of the main elements of Latin Jazz guitar.

In particular, listen out for: 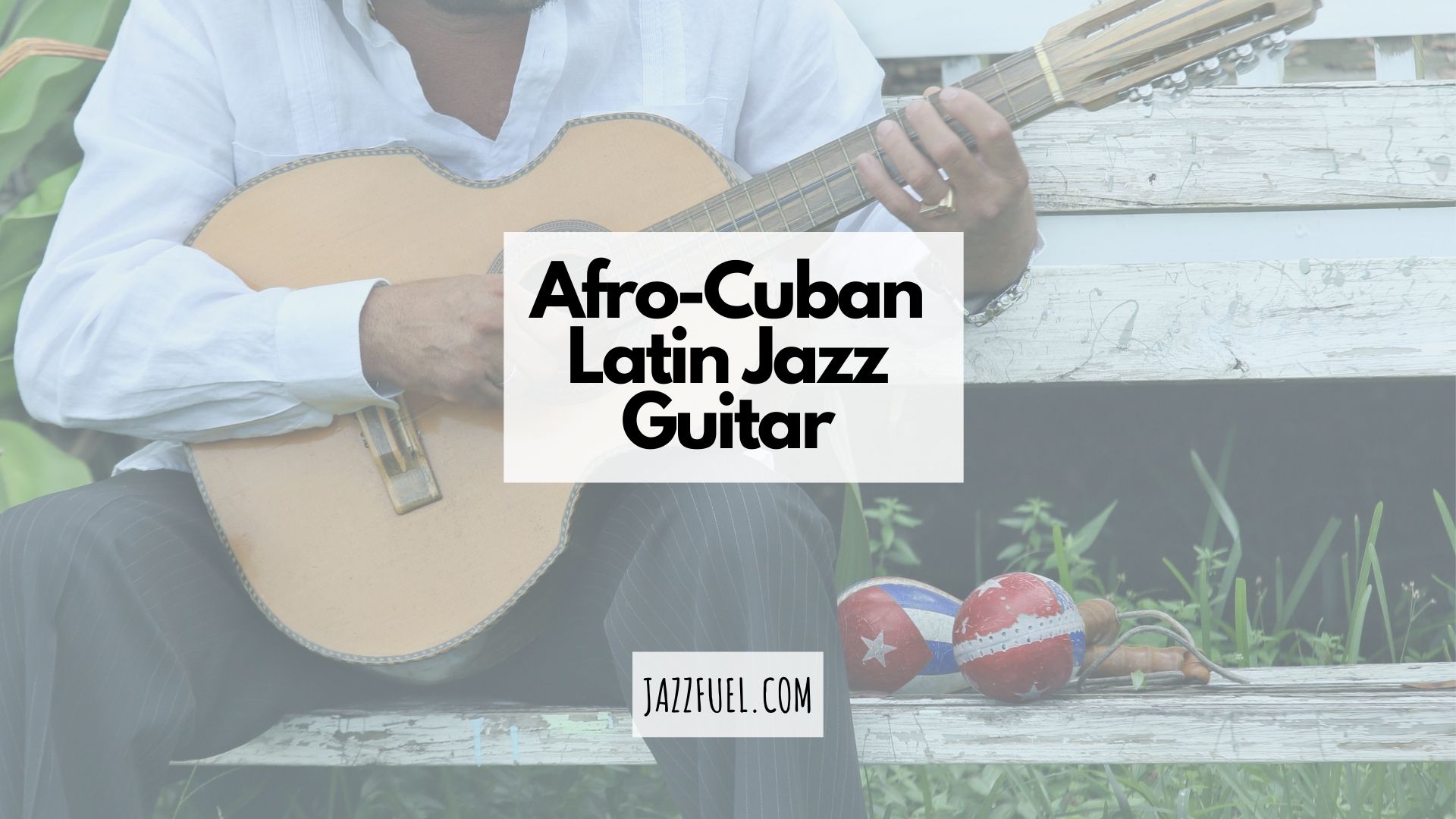 Juanito Marquez is one of the most influential Cuban guitarists of all time.

He left an incredible legacy for his guitar playing and his arranging skills that graced recordings including Omara Portuondo, Elena Burke, Julio Iglesias, Jose Feliciano and Gloria Estefan.

On this album, Juanito brings out the playful virtuosity of an ensemble instrument doubling horn lines with his guajeos/montunos as support to the rhythm section.

This album is fascinating for his unique arranging technique which features the guitar ahead of the piano as the principal soloist and harmonic instrument.

What makes their style so unique is the clarity of the sound, the rhythmic feel and their way of layering harmony instruments – such as with the guitar of Frankie Sanchez or a piano.

On A New Dimension we hear Sonny Henry covering the complete range of accompaniment duties that would previously have been done by two instruments.

Carlos Emilio “El Gordo” Morales is one of the most influential guitarists of the new generation of Cuban players after Juanito Marquez and Pablo Cano.

His infusion of jazz latin, funk & rock alongside Carlos Santana has left an indelible mark on Latin Jazz guitarists, as has his work as co-founder of Irakere.

Carlos Emilio creatively blended with Irakere pianist Chucho Valdez by functioning as another voice to the horn section and supporting the rhythm section with his great right hand.

Listen closely to some of these innovative techniques on the right side of your speakers on “Los Caramelos.”

This live album highlights the blend of vibraphone, fender Rhodes, and guitar.

Vibraphonist Cal Tjader featured only a handful of guitarists throughout his career.

From Rainey to Burrell to Zoller, the last guitarist Bobby Redfield fulfilled the guitar chair with the hallmarks of stylistic consistency with the period.

Listen out for Bobby on the right channel.

Clare Fischer’s contribution to Latin Jazz with songs such as “Morning” and “Pensativa” and his work with Cal Tjader maintain his importance in the development of the style.

His collaborations with guitarist Bobby Redfield in Cal Tjader’s group influenced his perspective on the role of Latin jazz guitar, which can be seen in this next recording on our list, Crazy Bird.

On this album we hear guitar Danny Embrey not only as a harmonic extension of Fischer’s piano voicings but as an ensemble instrument too. Fischer’s arranging techniques utilised the vast potential of the guitar in new ways.

As a great example, listen to how Embrey blends with Clare on “Pavillón.”

Legendary Cuban pianist and father to Chucho Valdeś, Bebo was a central figure in the Golden Age of Cuban Music.

The album Bebo de Cuba, which dates from the last section of his career, is a 2-CD set that highlights his classic Cuban piano style in various ensemble settings.

What makes this recording especially interesting is the inclusion of Puerto Rican guitarist Edgardo Miranda.

An accomplished cuatro player, Miranda’s unique approach to the guitar that combines his folkloric knowledge with sophisticated jazz vocabulary. It’s on display throughout this record, with his tasteful playing and accompaniment adding colour to the classic style of Bebo’s piano playing.

This recording caters to both the Afro Cuban and Brazilian sides of Latin Jazz.

Argentinian pianist and composer Jorge Dalto brings forth, together with his All-Star band, a stellar performance.

This album features one track in particular – “My Latin Brother” – which sheds more light on the greatness of George Benson’s Afro Cuban guitar playing.

Although his solo is full of jazz vocabulary, he uses critical Latin rhythmic patterns such as cláve (explained in more detail here), cáscara, tumbao, and marcha patterns.

This recording (and the next, “Paraiso”) offer an extraordinary glimpse into the guitaris genius of Steve Khan.

Considered ‘The Voice of Latin Jazz Guitar” Khan’s fusing of traditional Latin guitar with the sophistication of modern jazz brings forth a new, unique sound.

His tasteful yet luscious chords and rhythmic ideas support Samuels’ vibraharp and the flute of Valentín, while taking the role of the guitar into new horizons that can only be overtaken by his solo work.

Listen to the excellent arrangement of John Coltrane’s “Naima.”

One of Steve Khan’s most recent recordings reinforces his distinction as the “Voice of Latin Jazz Guitar” with his unique synthesis of traditional Latin guajeos and montunos with sophisticated Jazz harmony.

As did Sonny Henry with Willie Bobo, Khan features the guitar as the principal melodic and harmonic instrument without the support of traditional instruments such as the piano on his previous recordings.

However, on ‘Patchwork’ he changes the format; rather than featuring the guitar as the principal soloist and accompanist, he includes his longtime comrade in arms pianist Rob Mounsey.

Listen to Steve’s version of the Thelonious Monk classic “Epistrophy,” representing why Monk’s repertoire translates so well to Latin Jazz.

Thanks for reading and hope this has opened your eyes (and ears) to some of the beautifully underrated Afro-Cuban jazz out there.

If you’re looking to discover more, you can check out our round up of 10 great Latin Jazz artists here or head over to our Jazz Music homepage.