Afro-Cuban Jazz – An Introduction To The Style 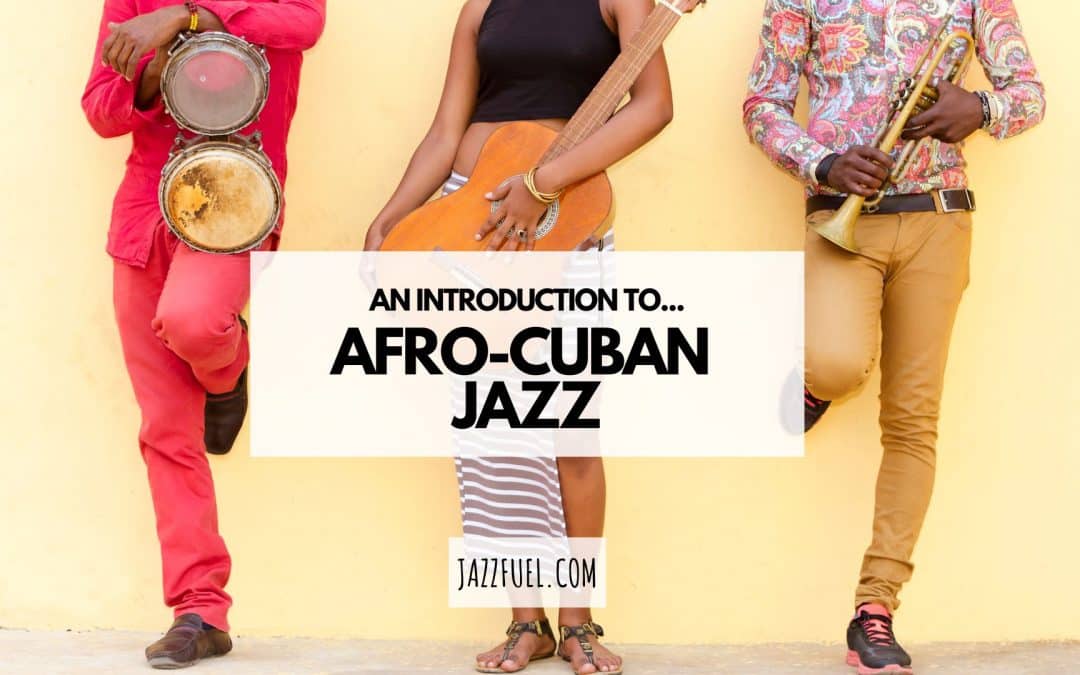 Afro-Cuban Jazz is the combination of Cuban and Latin rhythms with jazz improvising.

While the term “Latin jazz” is sometimes used to categorize all jazz-oriented music from Latin and South America, the styles of some of the countries have their own distinct qualities, with the bossa-novas of Brazil and the tangos of Argentina being quite a bit different than the more high-powered rhythms of Cuba.

Before there were any recordings, in Cuba the rhythms, polyrhythmic chants and drums that were brought over by Nigerian slaves. Over time they were blended in with the language and songs of Spain and the clavé was developed.

The basis for all Cuban music, the clavé is an unusual but catchy rhythm pattern played over two bars that was originally stated by hitting together of two wooden sticks (known as the clavés) and later adopted by the full rhythm section.

The catchy rhythm repeats every two bars and (if one assigns eight beats to a bar) can be achieved by clapping on 1-4-7 in the first bar and 3-5 during the second. This pattern is often reversed during solos.

Cuban rhythms were first heard in the U.S. in the music and playing of pianist and classical composer Louis Moreau Gottschalk. He had visited Cuba in 1854 and the influence was strongly felt in some of his compositions.

Sebastian Yradier’s “La Paloma” in the mid-1860s and Manuel Ponce’s “Estrellita (1909) were among the first hits in the U.S. that had Latin rhythms and melodies.

The son (the predecessor of the rumba) was one of the first rhythms invented by Cubans, becoming part of Cuban music around 1915-20.

Among the types of groups that were common in Cuba in the 1920s were the septeto (comprised of trumpet, tres, bass, maracas, clavés, bongos, and a singer) and the charangas (dance orchestras with a flute in the lead joined by violins, piano, bass and timbales).

The first authentic Cuban band to make an impact in the U.S. was Don Azpiazu’s Havana Casino Orchestra. Azpiazu’s goal was to combine Cuban music with jazz. He and his ensemble debuted on Broadway in 1930 and introduced such numbers as “Green Eyes,” “Mama Inez,” “Marta,” and their giant hit, “The Peanut Vendor.” 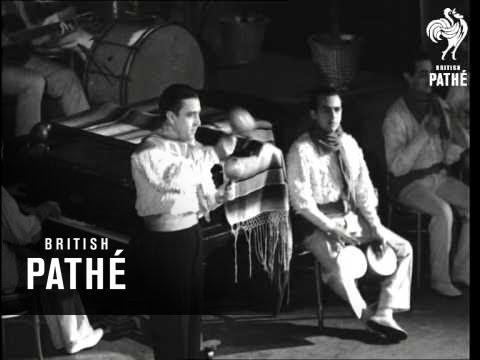 Ironically, while many of the songs that Azpiazu brought to the U.S. became standards (Duke Ellington and Louis Armstrong were among the many that recorded “The Peanut Vendor” in the 1930s), the name of Don Azpiazu has been mostly long forgotten. He returned to Cuba in 1932 and passed away in 1943, shortly before his musical dream was about to become reality.

In the 1930s, some Cuban and Latin-American melodies caught on in the U.S., but invariably they were utilized because they sounded “exotic.” The swing era musicians did not attempt to play the complex Cuban rhythms.

In Cuba at the same time, the music was becoming more sophisticated and evolving. The septeto (several trumpets, piano, tres, bass, conga, bongo and voices) was first formed by pianist-composer Arsenio Rodriguez.

The conga, which had been associated with carnivals and religious cults, became the most important rhythm instrument and a symbol for Cuban music. And quite significantly, in 1940 Machito put together his big band, the Afro-Cubans.

Although originally a Cuban dance band, Machito’s Afro-Cubans soon had the leader’s brother-in-law trumpeter Mario Bauzá as its musical director and arranger.

Bauzá had worked with several American swing bands (including those of Chick Webb and Cab Calloway) and he had the same goal as Don Azpiazu had a decade earlier. The first Afro-Cuban jazz song was Bauzá’s “Tanga” in 1943.

While swing musicians were mostly unable and unwilling to explore the complex Cuban rhythms, the generation of bebop modernists of the mid-1940s were much more open-minded. Machito’s ensemble was admired by both Dizzy Gillespie and Stan Kenton.

The fusion of jazz with Cuban music was beginning

Dizzy Gillespie added the Cuban conga player Chano Pozo to his big band, recording “Manteca.” Gillespie’s “A Night In Tunisia” (written in 1943) was also becoming a standard and, when he added bassist Al McKibbon to his orchestra, he found the ideal fusion between bebop and Cuban music which some called “Cubop.” Gillespie would be a proponent and leader in Afro-Cuban jazz throughout his career. 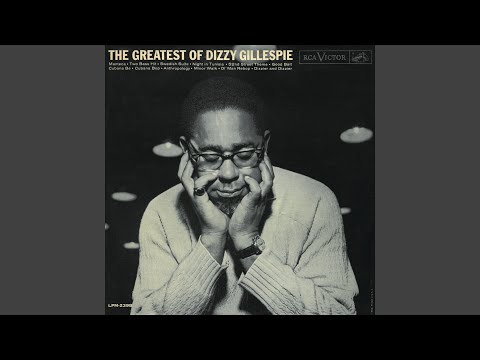 Stan Kenton recorded a new original called “Machito” and revived “The Peanut Vendor.” In January 1948 his orchestra played opposite Machito’s at a concert.

George Shearing in the 1950s regularly spiced up his quintet’s music by having Armando Peraza as his regular “special guest” on conga.

On the Cuban side, bandleaders Pupi Campo, José Curbelo, Noro Morales, René Touzet, Tito Rodriguez and, most significantly, Tito Puente were among those who opened up their Cuban music to add jazz soloists.

As for Machito, he used such guest jazz soloists on his recordings as Charlie Parker, Flip Phillips, Buddy Rich, Howard McGhee, and Brew Moore.

Parker, who recorded an album called South Of The Border, composed an Afro-Cuban jazz standard, “My Little Suede Shoes.”

Bud Powell’s “Un Poco Loco,” Kenton’s “23 Degrees North, 82 Degrees West” (the geographic location of Havana), and the arrangements of Chico O’Farrill (who wrote “Cuban Episode” for Kenton and “Afro-Cuban Jazz Suite” for Machito) were also quite significant, as were the hit mambo recordings of Damaso Pérez Prado.

In the 1950s, Afro-Cuban jazz was very popular and dance halls were filled with fans who loved to dance to the music.

Not all of the stars were actually Cubans. Tito Puente was born and raised in New York, percussionist Ray Barretto was from Brooklyn, and Cal Tjader (who was a major force in introducing the vibraphone to Cuban music),was of Swedish heritage and originally from St. Louis. But the great majority of the leaders of the music were Cubans and there were many in Cuba, including pianist-bandleader Bebo Valdes, who were not well known to Americans but were performing exhilarating music on the small island.

Although the Cuban revolution largely closed the door between the U.S. and Cuba for 30 years (other than the Cuban musicians who were able to defect), the music remained popular in the United States and was relatively prosperous while continuing to evolve.

Salsa, a parallel and often overlapping style that is generally outside of jazz, became very popular in the 1970s, putting the emphasis on rhythmic singers rather than instrumental solos although the function of the rhythm section is similar.

Among the most significant Afro-Cuban jazz musicians around today are:

The above list can be multiplied many times over and should be considered just a start in exploring the adventurous and rhythmically exciting (yet usually danceable) music.

The most rewarding Afro-Cuban jazz musicians have held onto the idiom’s foundations in bebop and Cuban dance music while being free to open their music to the influence and inspirations of r&b/soul, fusion, modern pop music and more adventurous styles of jazz.

As with jazz in general, Afro-Cuban jazz continues to move forward and attract colorful and innovative musicians who invigorate the music with their own fresh ideas.

Scott Yanow is a jazz journalist and historian who has written 12 books including Afro-Cuban Jazz and his most recent one, Life Through The Eyes Of A Jazz Journalist – My Jazz Memoir. He’s penned over 900 liner notes and reputedly reviewed more jazz recordings than anyone in history, including for magazines including Downbeat, Jazziz, the NYC Jazz Record, the Los Angeles Jazz Scene and Syncopated Times.