The Best Jazz Books of All Time 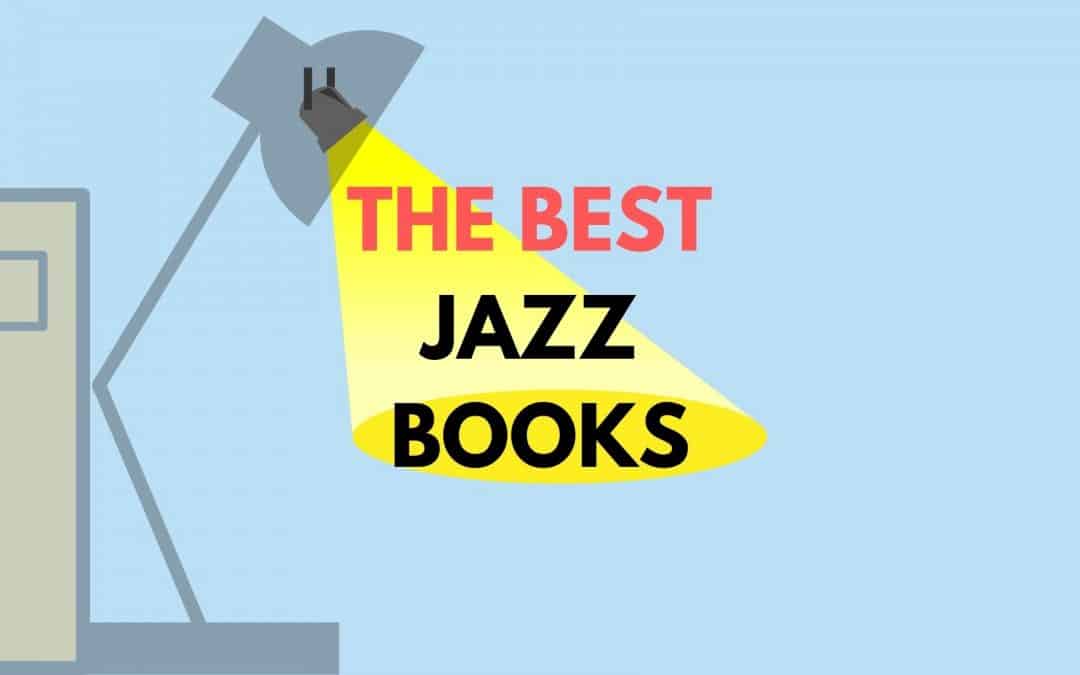 We’ve compiled this collection of some of the best jazz books of all time to unravel the stories behind the lives of some of the jazz greats. From Louis Armstrong and Charlie Parker through to Miles Davis and Keith Jarrett, here’s our pick of the recommended reads to get to grips with jazz history…

[if you’re actually looking for the best books to learn jazz & improvisation, we put together this list of the best jazz education books for each instrument]

Like many of the best jazz history books, this was written by the musician himself.

Miles: The Autobiography, like the man himself, holds nothing back. Miles bravely details his struggle with drugs and racism, and talks about the various women he has been with.

However, most of all, Davis talks of music and musicians, with many tales of the greats he’s played with, from Bird and Dizzy Gillespie to John Coltrane and Charles Mingus.

Miles continues his winning streak of engaging the audience by offering a fascinating and often riveting read about into his life as a jazz trumpet great.

You can check out which of his records we picked for our roundup of the best jazz albums in history here.

Biographer Laurence Bergreen enthusiastically pursues the story of Louis Armstrong both as a person and as an artist.

From the beginnings of jazz history at funeral marches and brothels, in a world of marijuana smoke, mobsters and razor-wielding prostitutes, to Armstrong’s role in turning it into high art.

This is one of the greatest books on jazz – a vivid bundle of information, put together using an archive of Armstrong’s writing, recordings, photographs and 1,800 hours of tape-recorded reminiscences and anecdotes.

From his emergence in the 1950s – when an uncannily beautiful young man from Oklahoma appeared on the West Coast and became, seemingly overnight, the prince of cool jazz.

In this first major biography, the story of Baker’s demise is finally revealed.

So is the truth behind his tormented childhood. The author brilliantly recreates the life of a man whose journey from golden promise to eventual destruction mirrored America’s fall from post-war innocence – but whose music has never lost the power to enchant and seduce us.

You can also find our Jazzfuel guide to the life & music of Chet Baker.

Filled with beaming admiration, Bird Lives! offers a riveting account of the great saxophonist-composer, which is not just limited to his artistic endeavours or his personal life.

Instead, the book aptly describes the environment that produced Parker and honed him. Russell explains Parker as a complex personality brought out by his times; a wayward virtuoso who exhibited an endless desire for sex, drugs, food, and, most of all, life.

Bird Lives! discusses Parker’s immense influence and importance for the decades that followed him, and details of how the driving force behind the mid-1940s bebop revolution never lived up to his potential as the domineering talent he was. It’s a personal and dedicated account.

Music students looking for an insight into his music should also check out the Charlie Parker Omnibook – a collection of transcriptions of his most famous jazz solos.

“One of the very few jazz books that deserve to be called literature” – Grover Sales, Saturday Review

Also: junkie, convict. And the author of Straight Life, the self-portrait that manages to put the pieces of this life together.

A truly engrossing jazz autobiography about the cool jazz great, described by JazzTimes Magazine as “the most harrowing jazz memoir ever”

Anyone wanting to learn more about the life of this alto saxophone great should as check out the 1982 documentary Notes from a Jazz Survivor which packs a powerful emotional punch.

You can also find our Jazzfuel guide to 10 of the best Art Pepper albums.

Coltrane: The Story of a Sound by Ben Ratliff

The story of John Coltrane goes beyond a simple discussion of music and cannot be reduced to the tale of a man who played the saxophone in the 60s.  Ratliff explores this very idea in his engrossing book, Coltrane: The Story of a Sound.

More than a simple jazz biography, it’s a study into the musical zeitgeist created by Coltrane; his identity, his influence, his distinctive language.

Understanding of music or of Coltrane is not essential to enjoy Ratliff’s engaging book. The words entrap us in an atmosphere that shows love, adoration, admiration, and wonder in spades, transporting us into something ethereal – the experience that only John Coltrane can give.

Unsurprisingly, for one of the most forward-thinking musician in history, you can find him in our round up of both the best Avant garde albums in jazz history and the best Hard Bop albums of all time.

An Unsung Cat by Safford Chamberlain

This book explores the life and music of jazz saxophonist Warne Marsh, who is possibly one of the most under-rated jazz musicians of all time.

It also includes a comprehensive discography along with archive photographs of the great musician who came through the purist Cool School of Jazz as a protégé of pianist Lennie Tristano.

Some of his most celebrated recordings include those with Lee Konitz, Bill Evans & Chet Baker.

Saxophone Colossus: A Portrait of Sonny Rollins by Bob Blumenthal

Filled with images taken by John Abbott, Rollins’ photographer of choice, this book captures the essence of the myth and the man.

Sonny Rollins’s influence on jazz is well-documented, most of all by Blumenthal, yet this book aims to offer a complete look into the life of the great saxophonist.

Painstakingly captured with evocative pictures and glowing words – and named after the 1956 masterpiece Saxophone Colossus – it’s an engrossing look into the jazz musicians life.

“Bluementhal’s familiarity with Rollins, and his insight into the body of work, is palpable throughout.” – JazzTimes

Books about the best jazz singers

Queen of Bebop: The Musical Lives of Sarah Vaughan by Elaine M. Hayes

With a host of accolades including Best Book of 2017 by both Publishers Weekly & The Washington Post, this jazz biography looks at the life and career of a true legend.

Sarah Vaughan came to prominence in the 1940’s during the rise of bebop, performing in Billy Eckstine’s band. One of her most celebrated songs – Lover Man – was recorded at this time, with Dizzy Gillespie & Charlie Parker.

“Necessary and exciting. . . . Queen of Bebop models a way of understanding the lives and artistry of jazz musicians — one that establishes their importance and centrality in creating the best that America has offered the world.” – Washington Post

A Biography of the First Lady of Jazz by Stuart Nicholson

While unable to talk with Fitzgerald directly, Nicholson went about creating as true an image of the great jazz singer as possible through written accounts and exhaustive interviews of childhood and professional associates.

The resulting book details the rise of a career that began at the age of 17. From the New York City Apollo Theater to the grandest halls and theatres around the country, Nicholson offers an insight into the jazz legend’s life through those who witnessed it all with her.

Nicholson’s account proves to be a fascinatingly detailed look into the life of a true great.

“a glittering, engaging, comprehensive biography and “must” reading for all her fans” – Midwest Book Review

The Life and Times of an American Original by Robin Kelley

A rewarding and exciting journey through the life of one of the jazz greats. The book is based around the idea that every great artist has a muse that propels them. In Thelonious Monk’s specific case, there were three…

Through this triumvirate,  the artistic zeal of Thelonious Monk went unabated for 3 decades. His tale is one of a child who received love and encouragement to be himself and explore his talents, in an environment of social and cultural emancipation.

“I doubt there will be a biography anytime soon that is as textured, thorough and knowing as Kelley’s” – August Kleinzahler, New York Times Book Review

The Man & His Music by Ian Carr

The Man & His Music celebrates the career and talent of the controversial jazz pianist who became known across the world for his improvisation.

Keith Jarrett found fame early, with his exuberant solo piano performances and his work with renowned artists – including many European jazz musicians – propelling his reputation. The author details his career’s many twists and turns, with obvious admiration and praise for Jarrett’s musical prowess.

The book also highlights various compositions, Jarrett’s tryst with classical music, and the various artistic mannerisms that made him such a distinctive voice in the jazz world.

Duke: A Life of Duke Ellington

In this Duke Ellington biography, American author Terry Teachout explores the life of the pianist, bandleader and composer, starting when he dropped out of high school and tracking his journey to becoming a. successful jazz musician.

In presenting the narrative of both Ellington’s public and private life, his personality is analysed in unflinching detail, moveing beyond just a famous music career.

As critic for The Wall Street Journal and author of a biography on Louis Armstrong – one of Ellington’s contemporaries – Teachout is more than up to the task of chronicling the pianist’s incredible life.

At 496 pages it’s not short, but it’s packed full of insight to keep your attention throughout and is well-worth a read.

Biographies of the jazz guitar greats

This was perhaps the first authoritative biography of jazz guitar legend Django Reinhardt’s life and works.

The original version of this book was written by French author, jazz expert, co-founder and long-term leader of the Hot Club de France, Charles Delauney.

Out of print for many years, the latest edition is split into 3 parts: first, the authoritative biography by Delaunay himself, the second a complete discography of the works of Django Reinhardt and, the 3rd, more than 150 photos and illustrations of the legendary gypsy jazz guitarist.

Further reading: our pick of the best jazz guitarists in history