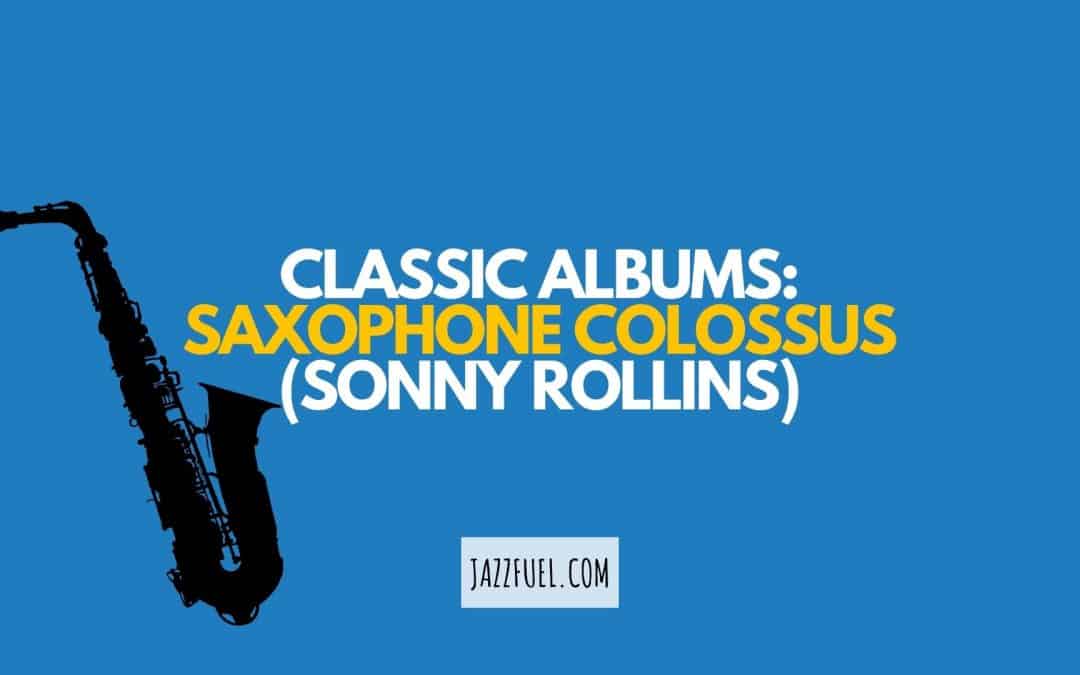 Saxophone Colossus by tenor saxophone titan Sonny Rollins is one of the most outstanding jazz albums at all times. Join us for a deeper look into what made the influential recording the masterpiece is is…

Theodore Walter Rollins, aka Sonny, is an American tenor saxophonist who can truly lay claim to be one of the greatest exponents of his instrument and also one of the foremost improvisers in jazz.

He is, of course, far too modest to make such a claim but that is no reason to be modest on his behalf.

Born in New York in 1930, he was immediately in the right place at the right time with the development of bebop and hard bop of the early fifties right on his doorstep.

While still in his teens he had recorded with Bud Powell and trombonist, J.J. Johnson, and would later work with Thelonious Monk and Miles Davis, Max Roach and Clifford Brown in the Roach/ Brown Quintet.

These collaborations date before Brown was tragically killed in a car accident in June 1956, and just a few days after Sonny had recorded Saxophone Colossus for the Prestige label.

His time with the Quintet found Rollins as one of the premier saxophonists of the era, and while he had already made some impressive albums for both Prestige and Blue Note between 1951 and 1956.

It is perhaps this extraordinary recording made on June 22, 1956 that witnessed the emergence of Rollins as one of the giants of the music and guaranteed him a place in the pantheon of tenor saxophonists along with Coleman Hawkins, Lester Young, Ben Webster and John Coltrane.

So, what is it that makes Saxophone Colossus such a classic?

Firstly, Rollins seems to have entered a purple patch over the previous six months leading up to the recording and had been prolific in his output in the studios.

The Quintet with Max Roach and Clifford Brown was predicted as being destined for great things, and the saxophonist seems to be playing freely without the shackles of self-doubt that would blight his career.

Later, it will enforce two sabbaticals where Sonny would simply disappear from the scene to practice and reassess his music.

Secondly, key to the recording is the personnel, and in particular the presence of Max Roach on drums.

On paper this is a top-drawer quartet with pianist Tommy Flanagan and the hugely experienced Doug Watkins on bass, but it is Roach who proves himself up to the challenge and able to keep up with the unstoppable Sonny.

The album comprises five tunes, a couple of standards, and three tunes credited to Rollins including the saxophonist’s first recorded version of the calypso that would be forever known as ‘St Thomas’.

From the outset it is obvious that Rollins is on top form. From Roach’s setting up of the rhythmical impetus to Sonny’s statement of the theme he means business.

There is a commanding edge to his tone, firm yet pliable, and the ideas seem to just come tumbling out of his horn.

One melodic idea after another, inextricably linked to the last in a solo that is completely satisfying in its logic and lyricism.

This is matched superbly by Max Roach’s solo that matches the intensity, mood and musicality of the saxophonist.

By complete contrast is the ballad ‘You Don’t Know What Love Is’.

Taking that big, granite hard tone Rollins gives a reading of the tune that is by turns stark, empty and almost devoid of emotion.

There is a let up of this almost unbelievable tension in the saxophone solo that relaxes just enough to let a little light into the darkness, although the pain and longing inherent in the song can be clearly felt.

This tension is further relieved by Flanagan’s delicate solo over Watkins’ solid support and the Roach’s brushwork.

The following ‘Strode Rode‘ is taken at a brisk tempo over which Rollins begins his solo with just bass accompaniment from Watkins until piano and drums re-enter giving the saxophonist a further lift to his already inventive solo.

With its relatively straight ahead feel and pulse, Tommy Flanagan feels right at home and also gets in a fine effort, perhaps even his best on the album.

A similar treatment is given to ‘Moritat‘ possibly better known as ‘Mack The Knife‘ in which again Rollins produces a wonderfully paced solo that concludes leaving things neatly for Tommy Flanagan to pick up in his solo.

These two tracks that would close side one of the original LP and begin side two, and provide some much needed relief from the drama of the opening pieces. They also set things up for the closing number ‘Blue Seven‘.

Initially an assuming blues with its stately introduction from bass and drums, and understated accompaniment from Flanagan, the piece turns into a quiet tour de force for the tenor man.

His lines unfurl with an indisputable logic, firmly placed with that wonderfully warm and flexible tone before a brief solo from the pianist. Rollins picks up his tenor and blows a few phrases before Max Roach takes center stage for a compellingly musical solo.

As if inspired by what he has just heard, Rollins again enters the fray with a series of phrases that dazzle with their lack of orthodoxy yet complete and utter logic. Altogether, the definitive blues perhaps.

Throughout the structure and feeling of the blues is retained, yet also hints at possibilities in the form that are yet to be investigated.

Whilst there is some continued uncertainty about the release date of Saxophone Colossus, depending on the source release dates vary between autumn 1956 and summer of 1957 it remains one of the most outstanding jazz albums of all time.

This period in time saw a creative period for Rollins that would result in a number of great recordings over the following twelve months, and would end 1957 with another classic recording from Sonny as we will discover later in this series.