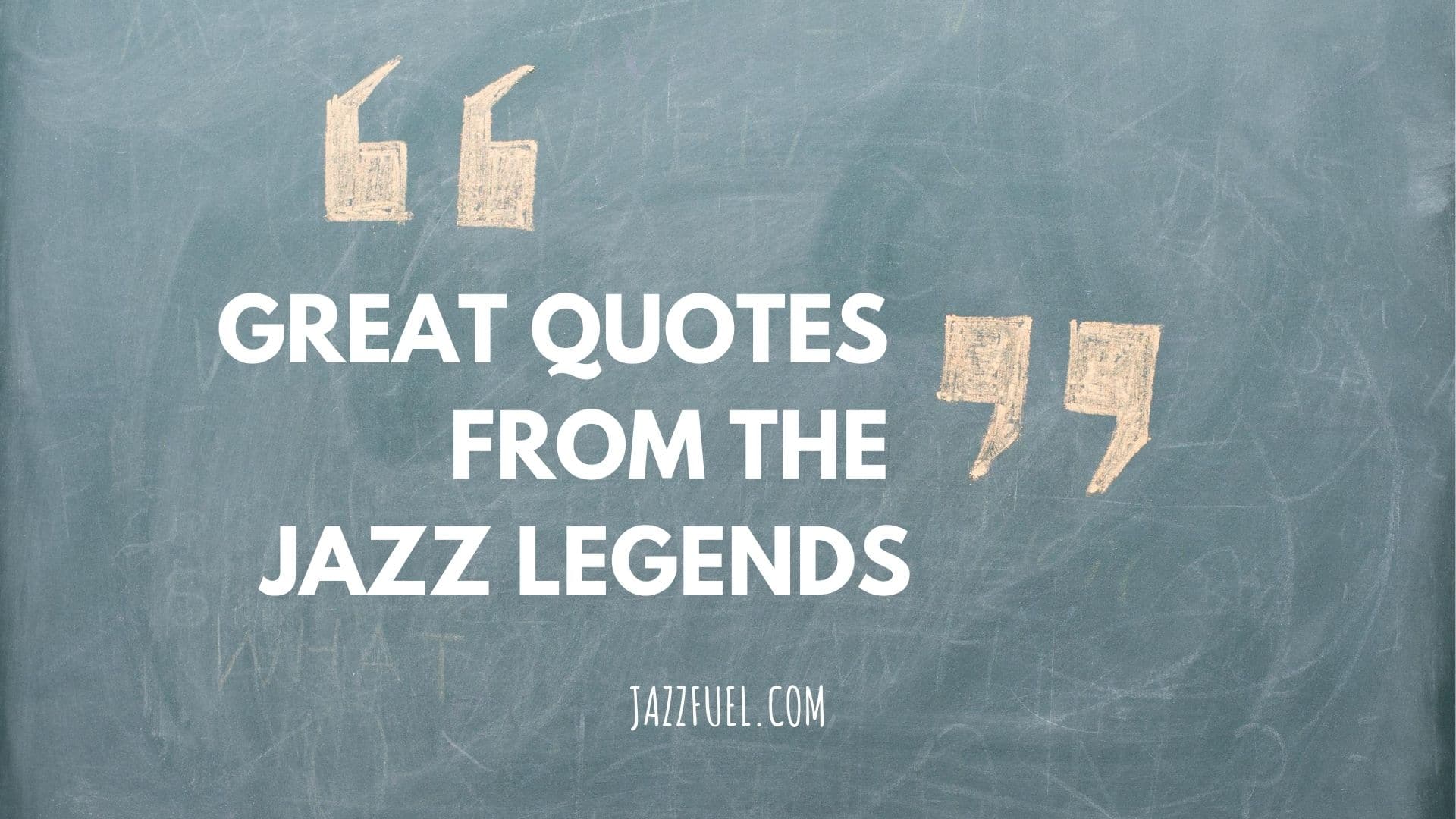 In this article we’ve picked 10 great jazz quotes from ten legendary musicians in history. The notes they play or sing may well be the most important thing, but checking out what they had to say on the topic of life and music gives an often fascinating insight into what propelled them to greatness!

The world of Jazz is full of highly interesting characters, deep thinkers and enigmatic personalities.

Quotes about jazz from our favourite musicians can help us to better appreciate their classic recordings, in terms of their intentions and feelings about the music.

How did the greats players approach the act of improvisation? How did they reflect upon their own work?

It can also be fascinating to learn about the context and conditions in which this art was made, and to gain an insight into what the jazz scene was like in years gone by.

So, we hope you enjoy our look at 10 great quotes from some of the most important musicians in jazz history.

“You should never be comfortable, man. Being comfortable fouled up a lot of musicians” – Miles Davis

This quote really captures one of the key reasons for the enduring importance and popularity of Miles Davis.

The legendary jazz trumpeter was a key figure in numerous major developments in jazz: he played with Charlie Parker at the height of the bebop era, before his nine-piece Birth of the Cool band became one of the most talked-about ensembles in the Cool jazz movement.

His ‘First Great Quintet’ made some of the finest hard bop records of the 1950s, while his Milestones and Kind of Blue albums signalled a harmonic revolution in the development of modal jazz.

His ‘Second Great Quintet’ had an innovative ‘free-bop’ approach, and in the late ‘60s he went electric and was at the vanguard of jazz rock, while in the ‘80s and ‘90s he was playing contemporary pop songs and winning over legions of new fans.

Miles could easily have just rested upon the success of Kind of Blue – the biggest selling jazz album of all time – but instead he refused to stay still, remaining determined to move forward stylistically until the end of his career.

Of course, that doesn’t mean that we all need to change our playing as drastically as he did, but it’s certainly true that many of the greatest artists share a similar dedication to honing their craft and pushing their art forwards, even if that’s within a narrower stylistic framework than Davis.

“Jazz washes away the dust of everyday life” – Art Blakey

Art Blakey is best known for his long running band The Jazz Messengers, which he led from the drum chair.

With a revolving cast of talented young musicians, the ensemble functioned as jazz’s premier apprenticeship scheme, with players of the calibre of Lee Morgan, Freddie Hubbard, Benny Golson, Mulgrew Miller, Wynton Marsalis and dozens of others coming through the ranks over the years.

As the name suggests, the band also acted as a kind of advocacy programme for jazz, spreading the message of the music wherever they played.

Blakey wanted their sound to be fun and accessible for ordinary working people, and this jazz quote captures the way in which art can help us to forget our troubles, and perhaps fleetingly transport us to somewhere otherworldly.

“I think the music situation today has reached the point where it isn’t necessary for categories. I think what people hear in music is either agreeable to the ear or not. And if this is so, if music is agreeable to my ear, why does it have to have a category? It either sounds good or it doesn’t” – Duke Ellington

Duke Ellington remains one of the most important composers and bandleaders in American musical history.

He came to prominence during the swing era of the 1920s and ‘30s and is thought of as a giant figure in jazz history.

But the way in which his music was labelled and marketed was something that always concerned Ellington. He tried to avoid using the word “jazz”, preferring “Negro” or “American” music instead.

His friend and colleague Billy Strayhorn coined the expression “beyond category” and, as far as Duke was concerned, this was one of the biggest compliments that could be paid to a musician.

“Jazz music is the power of now. There is no script. It’s conversation. The emotion is given to you by musicians as they make split-second decisions to fulfil what they feel the moment requires.” Wynton Marsalis

As well as being one of the world’s most acclaimed jazz trumpeters, Wynton Marsalis is a major public face of the genre as artistic director of New York’s Jazz at Lincoln Center. He’s also won multiple Grammy Awards, for recordings of both jazz and classical music, and the Pulitzer Prize for Music.

This quote sums up the wonder of jazz as an improvised music: much of its magic comes from the fact that it is being created in real time.

When you see live jazz, you witness the musicians onstage bouncing ideas off each other and essentially composing on the spot: what could be more enthralling than that?!

“I had spent many years pursuing excellence, because that is what classical music is all about… Now it was dedicated to freedom, and that was far more important.” Nina Simone

Simone was an extremely talented classically trained pianist in her younger years, prior to the lift-off of her career a jazz musician.

The singer and pianist initially had hits with standards such as ‘I Loves You, Porgy’ and ‘My Baby Just Cares For Me’, but later on her music took on a more overtly political tone.

In the 1960s she became involved in the Civil Rights movement and sang songs like ‘Mississippi Goddam’ and ‘Backlash Blues’, which addressed racial inequality in the United States.

Other works by jazz artists that touch upon themes of protest and the struggle for equality include Sonny Rollins’ ‘Freedom Suite’, John Coltrane’s ‘Alabama’ and Charles Mingus’ ‘Fables of Faubus’.

“Music is your own experience, your own thoughts, your wisdom. If you don’t live it, it won’t come out of your horn. They teach you there’s a boundary line to music. But, man, there’s no boundary line to art” – Charlie Parker

The alto saxophonist also spoke about more mundane things like the importance of practice and technical proficiency, but in this quote he touches upon something that a number of great musicians have suggested: that art is at its best when it is informed by real life experience.

Many jazz musicians have talked about telling true stories whilst improvising, and the importance of conveying genuine emotion and feeling.

Trumpeter Louis Armstrong perhaps put it more succinctly when he said: “You blows who you is”.

“I stole everything I ever heard, but mostly I stole from the horns” – Ella Fitzgerald

The First Lady of Song, as Fitzgerald was known, is one of the most likeable and infectiously swinging musicians in jazz. From her beginnings as a big band singer with Chick Webb to her innovative Songbook Series, via collaborations with Louis Armstrong, Joe Pass and Count Basie, she never sounded less than pristine.

This quote about her jazz education ties in with the old adage “talent borrows, genius steals”.

As jazz has generally been an aural tradition – much of it is not written down at all – it is quite commonplace to learn to improvise by copying and “stealing” from the masters.

It’s also interesting to learn that Fitzgerald took particular inspiration from “the horns” – i.e. the saxophone and trumpet players, probably largely from the swing and bebop eras – which explains her own highly impressive scat singing.

As a counterpoint this quote, Billie Holiday stressed the importance of ultimately finding one’s own unique voice (which, of course, both women had in abundance:

“Everyone’s got to be different. You can’t copy anybody and end up with anything” – Billie Holiday

“There are four qualities essential to a great jazzman. they are taste, courage, individuality, and irreverence” – Stan Getz

After coming to prominence as a soloist in Woody Herman’s ‘Second Herd’ band, Getz found mainstream fame when his collaboration with Brazilian guitarist Joao Gilberto spearheaded the Bossa Nova craze in the 1960s, with ‘The Girl From Ipanema’ becoming a huge hit.

Nicknamed ‘The Sound’, he was known for his gorgeous, lyrical tenor saxophone tone and his flawless technique.

In a situation not dissimilar to that of Miles Davis, he could have easily milked the the success of Getz/Gilberto into old age, but instead continued to push forwards artistically (albeit in a less radical way than Miles), working with younger musicians like Chick Corea and Joanne Brackeen.

“I believe in things that are developed through hard work. I always like people who have developed long and hard, especially through introspection and a lot of dedication.

I think what they arrive at is usually a much deeper and more beautiful thing than the person who seems to have that ability and fluidity from the beginning. I say this because it’s a good message to give to young talents who feel as I used to” – Bill Evans (pianist)

Despite being revered as one of the greatest jazz pianists of all time – not least for his wonderful trio albums and contributions to legendary records like Kind of Blue – Bill Evans was a shy and modest character, who was often plagued by doubt as to the value of his own work.

This quote refers to the importance of deep private study and self-reflection in developing a voice as an artist.

Of course, many of our favourite jazz musicians possessed stunning natural gifts, but most of them worked extremely hard to sound as good as they did.

“I say, play your own way. Don’t play what the public wants. You play what you want and let the public pick up on what you’re doing – even if it does take them fifteen, twenty years” – Thelonious Monk

Monk is perhaps the ultimate example of this.

A famously eccentric character, his piano playing is also highly unconventional and idiosyncratic.

But Monk was a genius who was way ahead of his time: although he wasn’t always appreciated by critics or audiences in his own day, his records are now considered classics and dozens of his strangely brilliant compositions have become jazz standards.

This quote perfectly sums up Monk’s steadfast dedication to his artistic vision, regardless of critical opinion or fads and fashions, which is one of the reasons that he continues to be held in such high regard.

We’ll be adding to this list of jazz quotes from time to time, so feel free to share any other favourites in the comments section here.

Looking to discover more jazz? Check out all our articles on the jazz legends here.