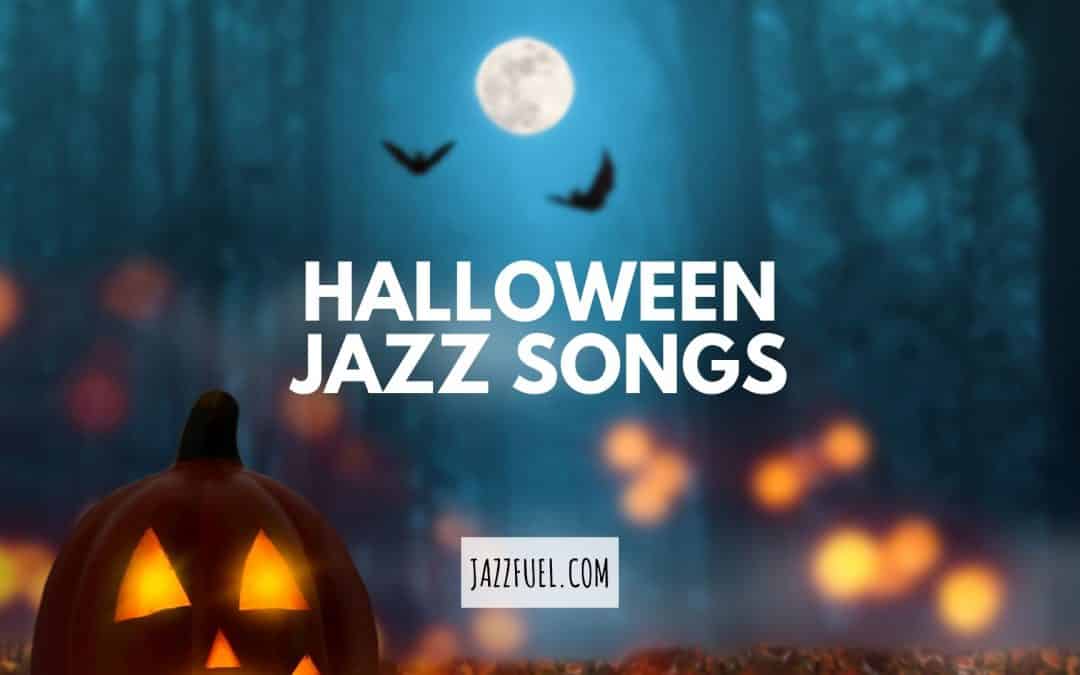 Jazz might not be the first thing you think of when it comes to Halloween music, but that doesn’t mean this genre doesn’t have its fair share of swinging, spooky-themed songs !

To celebrate this popular holiday, we’ve put together a list of 10 Halloween jazz songs whose titles make them essential listening this October…

We’ll be honest: these are not tracks full of haunted house sounds, ghostly noises and monster growls, but if you’re looking for a great excuse to listen to some classic jazz whilst keeping in the spirit (sorry!) of Halloween, you’re in the right place…

If you’re a Spotify, you can find the accompanying playlist here to listen to whilst you’re reading…

What could be more Halloween than witches?!

This Great American Songbook tune was written in the early 1940s by Rodgers & Hart and tells the tale of a lovestruck girl who seems to have her cast under a spell.

Whilst there are countless versions of this song out there, our top pick is from Ella Fitzgerald sings The Rodgers & Hart Songbook in 1956.

Ding-Dong! The Witch Is Dead

The title of this one speaks for itself: a true tale of murder and witchery.

You may know it best from the classic movie The Wizard of Oz, but we’d highly recommend this 2001 Harry Connick big band album Songs I Heard.

Listen out for guest soloist Branford Marsalis on Soprano sax!

I Don’t Stand a Ghost of a Chance with You

Of course, Halloween is not just about witches, and we’d be remiss not to include something of ghouls…

Technically this one is not themed around ghosts, but it has it in the title and gives us the chance to dig out this killer (see what we did there…) version of tenor saxophone Stan Getz playing it live in Stockholm…

In ancient tarot, the devil card indicates temptation or deception, whilst the moon tells of fears or secrets.

Needless to say, when these two things appear together – as in the title of this song – it’s not a good sign!

But despite the ominous title, this jazz standard has brought us some brilliant performances from jazz greats including Frank Sinatra, Anita O’Day, Jamie Cullum and Ahmad Jamal.

Or pick for you today, though, is trumpeter-turned-singer Chet Baker, a true Cool Jazz icon. Best enjoyed in the candlelight…

Beauty and the Beast

Whilst witches, ghosts and pumpkins might grab the headlines this holiday season, let’s not forget the monsters and other beasts!

Beauty and the Beast is a relative latecomer to this list, as it wasn’t written until 1991 when it was featured in the Disney movie of the same name.

Luckily for us, various jazz artists have taken to Disney repertoire over the years and Bebel Gilberto (daughter of Bossa Nova legend João Gilberto) does great things with this one.

I Put a Spell on You

Possibly one of the most famous jazz–blues songs of all time, I Put a Spell on You is a true classic with a perfect fit for Halloween.

It tells the tale of a woman who is so desperate to keep the object of her desire that she sings about putting a spell on him.

There are a huge number of versions of this song spanning a whole host of genres, but this one by Nina Simone is arguably the definitive one, which deserves a place on everyones Halloween Songs playlist this season!

It’s hard to escape Witchcraft this time of year, and this jazz song written in 1957 by Cy Coleman and Carolyn Leigh tells the tale of a man who seems to have fallen under a spell…

It’s become a hugely popular standard – Frank Sinatra recorded it 3 times alone and Bing Crosby also did an early version – but our pick this Halloween is a modern version by British singer-pianist Anthony Strong from his 2013 album Stepping Out.

What is Halloween without a little voodoo?

This selection is the only one on the list that comes without lyrics, so you can make your own guess as to the story behind this one.

Composed by Hard Bop trumpeter Lee Morgan, it was performed by Art Blakey and the Jazz Messengers on an album of the same name in 1961.

Listen out for solos by Lee Morgan himself as well as saxophone great Wayne Shorter.

We’ll round things off with a little occult.

And once again the act of being or falling in love is described as some horrible spell which some falls under – or has cast upon them!

Whilst the subject matter may be dark, our pick for this is anything but; a bouncy, swinging version by Oscar Peterson and his trio.

You’re spoilt for choice with this one though; you’ll also find classic versions by Louis Armstrong, Frank Sinatra and Ella Fitzgerald.

Thanks for reading! Hope this list keeps your Halloween night swinging and maybe also gives you some more listening ideas between now and the Christmas jazz period!

Looking for some more tips? Check out our pick of the 50 best jazz albums of all time, played by some of the most famous jazz musicians in history….