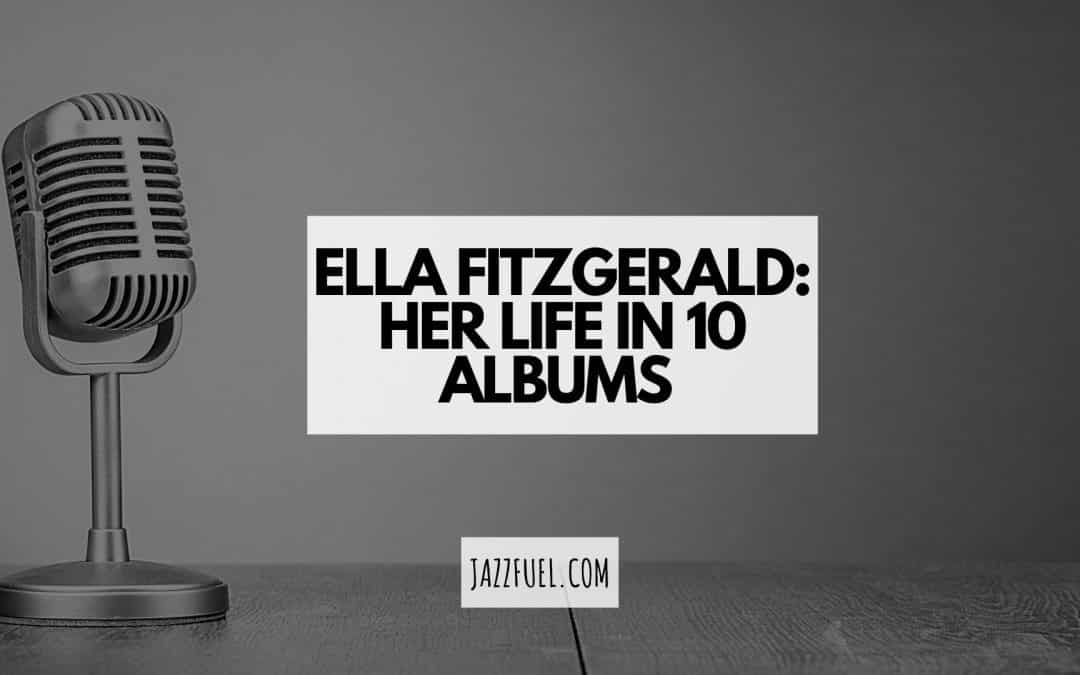 If you’re a fan of the great jazz singers, they don’t come much more legendary than Ella Fitzgerald.

For this article, we’ve picked 10 of her best albums, spanning more than half a century, which tell the life story of the American vocalist.

Affectionately known as ‘The First Lady of Jazz’, Ella Fitzgerald had a long career which spanned the whole gamut of twentieth century popular genres, from intimate duets to Country and Western numbers.

Her innovations in jazz scat singing in the ’40s and ’50s cemented her place in the halls of jazz history fame, and her timeless renditions of American popular songs serve as archetypes for students and music lovers alike.

We’ve collected together ten albums which show how this multifaceted artist went from humble beginnings to becoming one of the most famous characters in the story of jazz. 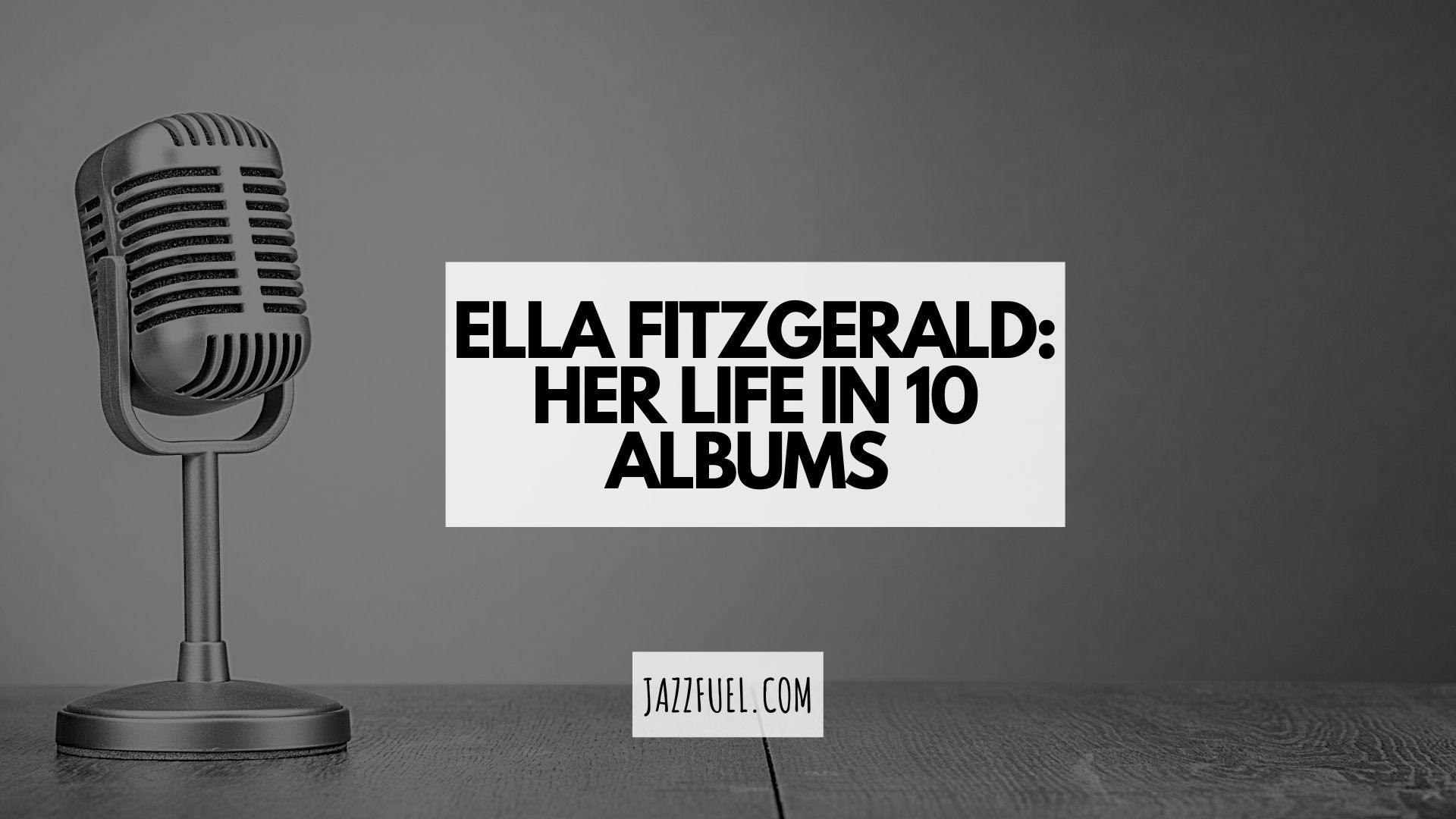 Born in 1917, Ella Fitzgerald grew up in poor neighbourhoods in Virginia and Westchester County, New York.

She was a bright student, enjoyed dancing and adored The Boswell Sisters.

Following the death of her mother in 1932, she relocated to Harlem to live with a relative. She fell behind at school and ended up in a reformatory, from which she escaped and survived by singing on the streets.

Her voice won her first prize in a talent show in 1934, and she continued to win competitions which would get her close to professional musicians. It was in 1935 when she met Chick Webb, who hired her to sing with his band.

With Webb, Fitzgerald went on to record hits such as ‘Love and Kisses’, ‘(If You Can’t Sing It) You’ll Have to Swing It (Mr. Paganini)’ and ‘A-Tisket, A-Tasket’.

When the drummer-bandleader died in 1939, she took on the role of running the group, renaming it Ella Fitzgerald and Her Famous Orchestra.

This collection of 78rpm singles includes her first credited recording, ‘I’ll Chase the Blues Away’, and provides great insight into her formative style. 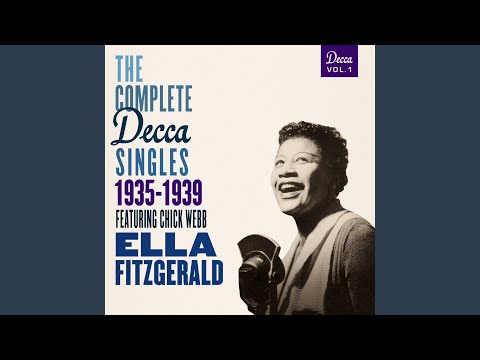 In 1942 Fitzgerald folded the orchestra and signed with Decca Records.

This led to her recording with famous rhythm and blues groups of the day, and between 1944 and 1945 she had two #1 hit singles with The Ink Spots (‘I’m Making Believe’ and ‘Into Each Life Some Rain Must Fall’).

By the mid-forties, impresario Norman Granz had become her manager and she began performing in his Jazz at The Philharmonic concert series. She started to develop a distinctive scat vocal style in imitation of the instrumentalists around her.

Lullabies of Birdland is a compilation of singles released in 1955 as an LP and includes critically acclaimed scat solos on ‘Oh Lady be Good’ and ‘Flying Home’.

Norman Granz was so enamoured with Ella Fitzgerald’s voice that he created a record company, Verve Records, to produce new recordings by her.

The first in the catalogue was Ella Fitzgerald Sings the Cole Porter Song Book (1956).

This would be the beginning of a succession of albums dedicated to American Songbook composers, and the first to offer a serious and thorough exploration of those songwriters.

Each composer is examined individually and in collaboration with famous arrangers and bandleaders such as Nelson Riddle and Billy May. The Duke Ellington Songbook is the only example in the series in which Fitzgerald sings with the composer himself.

This suite from George Gershwin’s opera sees Louis Armstrong and Ella Fitzgerald cast as the principal actors with a lush orchestral backdrop provided by Russell Garcia.

As the material is from an opera, we should expect storytelling to be at the heart of the work.

But the pair here draw out touching characterisations which, like all great drama, will have you lose yourself completely in the narrative.

Porgy and Bess is the third and final collaboration with Armstrong. The other duet albums, Ella and Louis (1956) and Ella and Louis Again (1957), are highly recommended.

One of Fitzgerald’s most commended and best-selling albums, Ella in Berlin features a vocalist at the height of her powers.

She had by then consolidated her approach, and the innocence in her tone in the ’30s matured into a worldly and nuanced style capable of everything from heartfelt ballads to bebop acrobatics.

This recording is live, and you can hear the excitement of the audience as well as the warts in the playing.

In ‘Mack The Knife’, Fitzgerald forgets the lyrics but doesn’t miss a beat: as if improvising scat melodies wasn’t enough, she takes it one step further by spontaneously creating new lyrics!

Other great small-group albums recorded around the same time are Clap Hands, Here Comes Charlie! (1961) and Ella in Hollywood (1961).

Interesting comparisons can be drawn by putting the Berlin concert next to Ella in London (1974). In both cases she is a tour de force and is barely off-mic, but the more gravelly timbre of her voice in London hints at how her sound would change in later years. 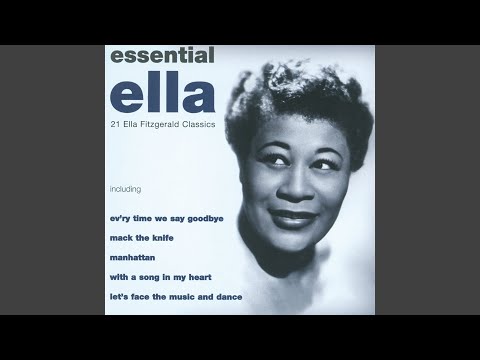 The early to mid-sixties was Ella Fitzgerald’s prime in both her proficiency and popularity; the same could be said of Count Basie and his big band, which makes this album a real treat.

It also serves as a wonderful contrast to her work with long-time friend and collaborator Duke Ellington.

Typical of Basie’s arrangements (penned here by Benny Carter and Quincy Jones), the writing and playing is tight and muscular.

Although no barriers were broken in this session, it epitomises Fitzgerald’s singing at the time and is a joy to listen to.

Norman Granz’s Verve Records was sold to MGM in 1961, and Ella Fitzgerald’s contract was not renewed.

As a result, when her engagement came to an end in 1967, she moved to Capitol Records.

The albums made under this new management mark a brief departure from the American Songbook, and saw Fitzgerald explore Christmas carols (Ella Fitzgerald’s Christmas, 1967), country hits (Misty Blue, 1967) and medleys (30 by Ella, 1968).

Brighten The Corner is a collection of Christian spirituals with choral and orchestral accompaniment.

The singing here is generally aligned with the more reverent aesthetic, although Fitzgerald probably allows too much swing in her phrasing for conservative gospel aficionados.

Throughout her career, Ella Fitzgerald worked with great jazz pianists in the dangerously stark setting of voice and accompanist.

There is nowhere to hide and both musicians are required to pull more than their usual weight.

She was more than up to the challenge, however, and over the years recorded duo albums with Ellis Larkins, Paul Smith and Tommy Flanagan.

This example with Oscar Peterson (and former husband Ray Brown joining halfway through) showcases a seasoned voice in the early years of deterioration.

However, her rhythm is still swinging and her diction still sharp.

Not usually regarded as one of Ella Fitzgerald’s Songbook editions, Ella Abraça Jobim nevertheless follows the same pattern of dedicating an entire album to a single composer’s work and is the last instance of this approach.

The album of Antonio Carlos Jobim songs features arranging and recording techniques prominent at the time: the sound is clear (bordering on harsh) due to digital mixing, and the amount of reverb is, shall we say, of its time.

A singer’s instrument is her body, so we can expect the aging process to affect her abilities more than other musicians. Ella Fitzgerald’s once focused tone has morphed into a wide vibrato by now, and there is less accuracy of pitch.

However, she still has an enormous capacity to tell stories in a poignant and expressive way, and the decades of experience make this well worth a listen.

By the early eighties, Fitzgerald was suffering from a number of health problems exacerbated by a lifelong heavy touring schedule.

In 1986 she underwent heart surgery and was becoming blind due to diabetes.

Her declining physical condition did not stop her from recording in a duo setting however, this time with guitarist Joe Pass.

This final chapter features a noticeably fading voice, but with the richness and sense of swing present in all her performances.

Ella Fitzgerald performed in public for the last time in 1991 and lived in Beverly Hills with her family until her death in 1996. Her legacy of work still inspires us today, and she will be forever remembered as a legend of twentieth century music. 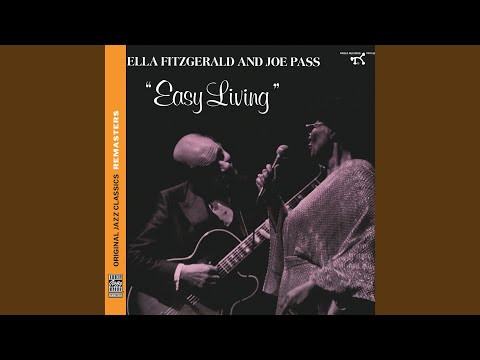 Thanks for joining us for this journey through the life and music of Ella Fitzgerald, one of the greatest jazz singers of all time!

Looking for more? Jump forwards to the 21st Century with this appreciation of Cecile McLorin Salvant or check out all our articles on jazz music.