Few artists bridge the gap between jazz and the wider public like ‘Ol’ Blue Eyes’. Here we take a look at ten of the greatest Frank Sinatra songs from across his iconic career.

Frank Sinatra is one of the biggest selling artists of the 20th Century, with numerous recordings that are instantly recognisable to almost everyone.

At the same time, many jazz musicians regard him as an authoritative interpreter of the Great American Songbook, show tunes and theatre songs that makes up a significant proportion of the jazz standard repertoire.

Sinatra also collaborated with a number of important jazz musicians, including Count Basie and Duke Ellington, in an illustrious career that saw him lauded as one of the greatest singers of all time, as well as an academy award-winning actor and era-defining style icon.

In this article we’ll take a look at ten of Sinatra’s most iconic recordings, in roughly chronological order, ranging from snappy swingers to moving torch songs and everything in between.

And, for those of you looking for a first taste (or a classic relisten) our top pick from the Frank Sinatra discography is without a doubt Frank Sinatra Live at The Sands which you can find on Spotify, Youtube or on physical here: 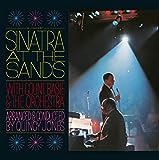 Sinatra at the Sands
Check Price on Amazon

Francis Albert Sinatra was born in 1915, to Italian immigrant parents in Hoboken, New Jersey. As a teenager, he became a fan of big band jazz, idolising Bing Crosby as he started to work professionally as a singer himself.

During the swing era, star bandleaders led hugely popular big bands that would often include a featured vocalist. Sinatra first found some success filling this role with trumpeter Harry James’ band, before moving on to front Tommy Dorsey’s orchestra.

He had a number of huge hits with Dorsey, among them this mournful ballad, on which Sinatra is backed by vocal group the Pied Pipers and a distinctive celeste part. ‘I’ll Never Smile Again’ was written by Ruth Lowe as she grieved following the premature death of her husband.

Sinatra – at this point a skinny young man with a charming smile and piercing blue eyes – became a massive heartthrob during this period, as hordes of teenage girls (known as “bobby soxers”) flocked to his concerts.

This particular recording spent 12 weeks on top of the Billboard charts.

Following this initial success, Sinatra’s career had taken a downward turn by the early 1950s as his popularity waned and he went through various troubles in his personal life.

He turned a corner in 1953, however, when he signed a recording contract with Capitol Records.

Pairing him with the arranger and conductor Nelson Riddle, the label encouraged him to take a new direction focused on sophisticatedly swinging selections from the Great American Songbook, in a marked contrast to some of the second-rate novelty numbers he had recorded in recent years.

One of the great albums of this period is Songs For Swingin’ Lovers, a set of relaxed romantic numbers that are brilliantly orchestrated by Riddle.

‘I’ve Got You Under My Skin’ is one of the most popular Frank Sinatra songs in his discography, with the crooner unfolding Cole Porter’s wry lyrics around that memorable refrain in the low wind parts, punctuated by a powerful trombone solo in the middle.

Sinatra’s great career revival around this time was also helped by his appearance in the film From Here To Eternity, for which he won an Oscar.

An innovative facet of Sinatra’s wildly successful run of albums for Capitol Records was his creation of some of the very first ‘concept albums’; records where all of the tracks contribute towards a unified narrative or theme.

One of these was Frank Sinatra Sings For Only The Lonely, which followed in the footsteps of past releases like ‘In The Wee Small Hours’ and ‘Where Are You’.

It explores themes of heartbreak and despair. For, while things were now going well in a professional sense, Sinatra’s personal life was turbulent – he had recently finalised his divorce from Ava Gardner, his second wife – while arranger Nelson Riddle had suffered the deaths of his mother and daughter.

The haunting title track, ‘Only The Lonely’ was written especially for the session by regular Sinatra contributors Jimmy van Heusen and lyricist Sammy Cahn.

The album’s Grammy award-winning artwork, by Nicholas Volpe, features a painting of Sinatra made up as a tearful clown.

A more upbeat concept album, Come Fly With Me was designed as a kind of musical trip around the world, with a number of geographically-themed songs featuring: ‘Brazil’, ‘Moonlight In Vermont’, ‘On the Road to Mandalay’, ‘Blue Hawaii’ and so on.

The album contains some of the most influential Frank Sinatra songs which are instantly recognisable even to this day.

This album is notable as Sinatra’s first collaboration with the arranger Billy May. Whereas Riddle was known for his gorgeous string writing, May – a trumpeter himself – tended towards a punchier brass-laden sound.

The title track ‘Come Fly With Me’ – again composed for the occasion by van Heusen and Cahn – perfectly encapsulates Sinatra’s aura of easy-going charisma. The song has become a favourite of crooners and jazz singers, with covers from the likes of Kurt Elling, Eliane Elias and Curtis Stigers.

‘Fly Me to the Moon’ had already been covered by dozens of artists by the time that Sinatra put his stamp on it.

Might as Well Be Swing. The 1964 album was one of a number of collaborations the crooner made with Count Basie’s fabulous jazz orchestra, following on from Sinatra-Basie: An Historic Musical First.

Originally titled ‘In Other Words’, Bart Howard had first conceived of the song as a waltz. However, it was repurposed as a toe-tapping 4/4 swinger for the Sinatra-Basie record by the arranger Quincy Jones, who would later go on to find fame as a songwriter and producer for Michael Jackson, among others.

Today the song, with its famous opening lyrics – “Fly me to the moon and let me play among the stars” – is inextricably linked to the American singer and is of course one of the most definitive Frank Sinatra songs.

Fans would clamour for him to perform it in concerts throughout his career.

‘One For My Baby (And One More For The Road)’ is a booze-soaked classic of the American Songbook.

With music by Harold Arlen, Johnny Mercer’s lyrics – allegedly inspired by his own scandalous and ill-fated affair with a young Judy Garland – detail the protagonist’s romantic troubles whilst demanding more drinks from a fictional bartender named Joe.

Sinatra recorded the song four times during his career, but this version is from the classic Live at the Sands album, another collaboration with the Basie Orchestra that was recorded in concert at the Sands Hotel and Casino in Las Vegas.

This particular track signals a rare moment of quiet intimacy during the programme, as Sinatra is accompanied solely by his long-standing regular pianist Bill Miller.

7. Strangers In The Night

With this 1966 hit, Sinatra started to abandon his usual swing aesthetic in favour of a driving contemporary pop sound.

This artistic decision was a success: the song won multiple Grammy Awards and the album of which it was the title track became Sinatra’s most commercially successful yet.

Unlike, say, Ella Fitzgerald or Mel Torme, Sinatra was not an improvising jazz scat singer. However, towards the end of this track, with the music building to a crescendo, he memorably replaces the lyrics with the scat syllables “doo bee doo bee doo” before taking a short embellished vocal solo.

Sinatra made one of his most memorable collaborative albums in 1967 when he joined forces with the father of bossa nova, Antonio Carlos Jobim.

Bossa Nova – a fusion of Brazilian samba rhythms with sophisticated jazz-influenced harmony – had taken the US by storm a few years earlier, with Stan Getz’s albums with Jobim and Joao Gilberto making a particularly big impact.

As it happened, Sinatra’s cool delivery was a perfect match for Jobim’s beautifully understated music.

With Claus Ogerman on conducting and arranging duties, we hear seven Jobim compositions, including eternal bossa favourites such as ‘The Girl From Ipanema’ and ‘Corcovado’, with Sinatra singing translated English lyrics, rather than the original Portuguese ones.

There are also three American Songbook tunes that are given bossa makeovers: ‘Baubles, Bangles and Beads’, ‘I Concentrate on You’ and Irving Berlin’s brilliant ‘Change Partners’, which works perfectly with a Brazilian twist.

Like ‘Strangers In the Night’, ‘My Way’ has less of a jazz-adjacent feeling to it than much of his earlier work, but it is certainly one of the most iconic Frank Sinatra songs, and perhaps the one that has made the greatest impact upon the wider public.

With lyrics that look back nostalgically at a life of defiantly following one’s own path, it’s no surprise that ‘My Way’ is consistently cited as the number one most popular music choice for funeral services and memorials.

And, like many of the Frank Sinatra songs on this list, it has been covered by dozens of artists – in this case, that includes the likes of Elvis Presley, Sid Vicious and Marvin Gaye! – but it is Sinatra’s version that is definitive.

The song that would become Sinatra’s last great hit was originally written for Liza Minnelli to perform in the Martin Scorsese film of the same name.

But it became one of Frank’s signature songs and a key part of his live repertoire when he recorded it on his 1980 album Trilogy: Past Present Future, upon which he combined a return to classic swinging American Songbook material with covers of contemporary pop numbers.

An ode to The City That Never Sleeps, there are few songs that have such iconic or instantly recognisable opening lines:

Thanks for joining us on this whistle-stop tour of Frank Sinatra’s incredible career. What have we missed from the list? Let us know your favourite Frank Sinatra songs in the comments below.

Fancy learning more about the greats of the swing era? Check out our article on the best big bands of all time and be sure to read our list of the top ten jazz singers in jazz history.