A Guide To The Different Types of Guitars 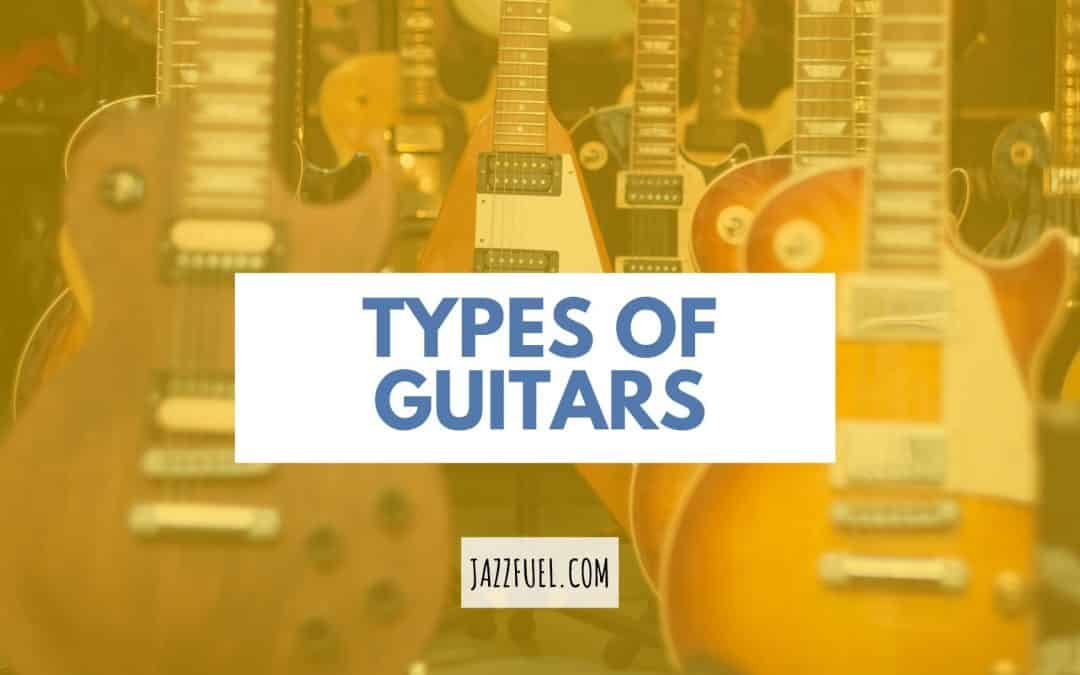 The guitar is one of the most prominent and commonly played instruments in music history and, in this article, we’re going to look at the main types of guitars, as well as some more unusual varieties…

On first glance, the many and varied types of guitar could probably be broken down into two categories: acoustic and electric.

But what about the bass guitar? The semi-electric? Does ‘classical guitar‘ deserve its own category? And let’s not even get started with the pedal steel, baritone or jumbo guitars!

Like saxophones, keyboards and other instruments, the many different types of guitar cover a broad range.

We’ve already written in-depth about the most famous guitar brands from around the world, so let’s get deeper into the different types and their usage, their tuning, and some of the musicians that have popularised them.

Acoustic, semi-acoustic or electric, it includes six strings tuned to E A D G B E which allow it to hit some deeper bass tones at its lowest and veering towards tenor and even alto frequencies at its highest.

Most guitar players learned how to play on an inexpensive acoustic guitar and many still focus exclusively on this dynamic and engaging instrument.

The acoustic guitar often reveals the full range of a player’s abilities at their most exposed; no effects or distortion, just their fingers and strings to produce great music.

There are many different types of acoustic guitar to choose from and the one you choose will depend on the music you play.

Aside from the standard options (usually jazz vs classical, depending on size), a few popular examples include twelve string guitar, flamenco guitar, resonator guitar and parlour guitar.

Steel is usually better for jazz because it has higher resonance and can withstand the heavy attack many jazz players put on their strings.

However, more delicate players may prefer nylon. It requires a softer touch and produces a tone that puts it more in classical music.

As always, it’s useful to listen to the greats to really get an understanding of what an instrument can do.

Inside the world of jazz guitar, a couple of greats to check out are:

If you’re looking for an electric guitar that can still play acoustic sounds, this guitar type may be the best for you.

As the name suggests, it lets you utilise the subtle style of the acoustic with the resonance of the electric.

You can play it either unplugged or plugged into an amp, switching between the different types with ease.

The semi acoustic guitar isn’t typically used by big-name players but combined with a loop pedal, it may be a good instrument for the solo guitarist.

The other popular use of this guitar is for touring musicians who aren’t able to take both electric and acoustic instruments with them.

It’s a great all-in-one option, but it’s not quite as subtle and soft as an acoustic, nor as powerful as an electric.

It can do in a pinch, though, and it is still an excellent recording guitar.

These days, most guitarists who play in bands use one of three types of electric guitar:

The hollow body and semi hollow guitar are generally regarded as the best types of guitars for jazz.

They produce a very subtle and easy-to-adjust tone which sounds great right out of the box.

The archtop is an especially popular hollow option amongst jazz players, with guitar brands such as Ibanez and Gibson leading the way here.

If you play a more punchy style of jazz, like jazz-rock or jazz-funk, a solid-body guitar such as the Fender Telecaster or Stratocaster might be worth checking out.

These guitars have a bit more bite to them, with a sharper tone that works well in fusion genres.

However, traditional jazz players may find them a bit too “rock and roll” for their needs.2

If we’re looking for examples of legendary guitarists playing electric, there’s a lot of choice!

You can check our in-depth guide to many of these players here, but three great choices to get you started:

Whilst the bass is often considered a completely separate category of instrument to a guitar, it does technically deserve a place in this list!

The electric bass guitar is of course incredibly common in the music world can be heard in a range of more modern jazz genres such as fusion.

A standard bass guitar has the first four strings tuned to that of a traditional prime guitar tuning (E A D G), making it simple for guitarists to transition to this instrument.

Modern rock or heavy metal bands, however, often use six or even seven-string bass guitars to produce very deep tones.

It’s also worth noting that acoustic bass guitars do exist, although they are not cheap and their use is limited.

Outside of the most common guitars that we all know, there are a whole host of unusual guitars and guitar-related instruments.

We’ve picked a few of the more utilised ones here…

The soprano guitar looks like a normal acoustic ‘prime’ guitar in just about every way; it’s just it’s sound which is higher-pitched.

In fact, you can turn a good-quality prime into a soprano guitar by stringing it with higher strings and tuning it a full octave higher than usual.

We wouldn’t suggest doing this, though…

Specially-made soprano guitars have a higher-quality construction, which is necessary for handling the higher tension produced by the strings.

Beyond this difference, this instrument has the same six guitar strings and the same string layout: E A D G B E.

As a result, prime guitar players can easily transition to the soprano guitar with relative ease.

You don’t hear this instrument too often outside of Niibori orchestras.

These groups typically use the soprano guitar as the primary solo instrument due to its straightforward and high-pitched tonalities.

Unfortunately, keeping this instrument tuned is challenging due to the high string tension.

This is a fascinating instrument and, whilst a regular 6-string alto guitar exists (pitched a 5th higher than a regular classical guitar) the name is usually used to describe and 11-string instrument.

In this form, the alto guitar includes five more bass strings to create a broader range of potential tones, which are usually tuned to:

These extra strings, and alternate string tunings, make it harder for regular prime guitar players to transition to the instrument.

Developed during the 1960s, it has the shape and feel of a large lute, which means the alto guitar is primarily used to play traditional lute music in a modern format.

The lute itself requires a different playing style that can be hard for other guitar players to emulate, so this alto guitar provides a way for players to transition to lute music without as much struggle.

Though it may take time to master the tuning, skilled players will get the hang of it reasonably quickly.

Developed by Gibson and C.F. Martin, the tenor guitar is another fascinating change-up from the regular classical prime guitar.

It’s a smaller instrument with just four acoustic strings and was initially created to help banjo players to transition to guitar.

It covers a very similar tonal range to the four-string banjo but is a little easier to play and doesn’t require as much careful picking and finger control.

This type of guitar is typically tuned in fifths with a standard option of C G D A. This makes it similar to not just the banjo but the viola and the mandola.

As a result, players of those instruments often transition easily to the tenor guitar.

However, you can also use tunings like D G B E (Chicago) and G D A E to produce slightly different tonal coverage, such as that of the violin or mandolin.

The baritone guitar is similar to the prime guitar in that it possesses six strings. However, it has a longer scale length, a larger body, heavier bracing and a more substantial body.

Uncommon until the late 1950s, it became popular in its electric form for surf music and spaghetti western soundtracks, as well as a replacement for the bass guitar in some groups.

Tuned E A D G B E (an octave below the normal guitar), it has become more commonly used in recent years.

Rock guitarist Duane Eddie legendarily used it in songs like “The Son of Rebel Rouser” to produce his trademark “twang.”

The Beach Boys’ Brian Wilson also used it heavily in songs like “Caroline, No” and “Dance, Dance, Dance.” Guitarist and singer Glen Campbell also used it on most of his biggest hits, like “Galveston.”

This is by no means a complete list of the many and varied types of guitars out there.

If you’re looking for more interesting variations, check out the harp guitar with its additional unstopped strings or the touch guitar, which are tapped instead of strummed.

The lap steel guitar is another interesting instrument. Played horizontally, it originated in Hawaii after the Spanish guitar was brought to the islands in the 1800s. It produces the trademark ‘Hawaiian sound’ that became a craze in the US in the first half of the 20th century.

Lastly, if you’re looking for an interesting classical sound, why not give the baroque guitar a go or a parlor guitar which is a great option for intimate solo gigs.