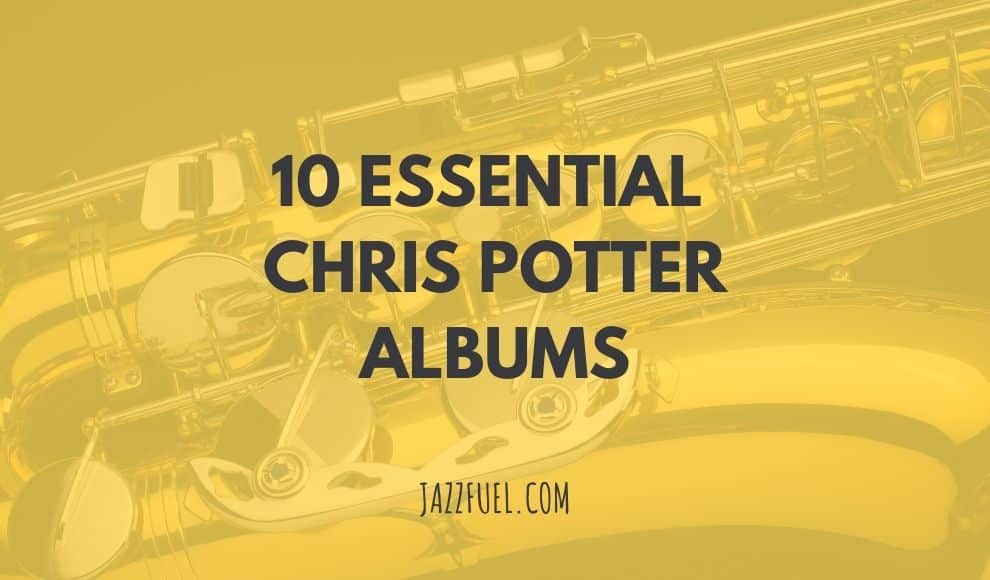 Tenor saxophonist Chris Potter remains one of the most impressive jazz musicians to have emerged in the last 30 years.

Blessed with awe-inspiring instrumental technique, no doubt honed through countless hours in the practice room, he emerged as a young prodigy in the early 1990s.

After cutting his teeth in bands led by various elder statesmen and women, he established himself as one of jazz’s major soloists and sidemen, as well as a formidable bandleader and accomplished composer.

With albums on many of jazz’s most important record labels, featuring all-star colleagues, and a stylistic palette ranging from swinging standards to futuristic fusion, this article will take a look at 10 of the finest albums from Chris Potter‘s impressive discography, along with some videos.

And don’t forget, you can find tips on other legendary modern sax players here.

Chris Potter was born in Chicago, Illinois, in 1971, before his family moved to Columbia, South Carolina.

It was here that he began learning several musical instruments, before settling upon the saxophone after hearing a recording of the altoist Paul Desmond.

He quickly developed a reputation as something of a prodigy, and YouTube videos of live performances from his teenage years document a young man in possession of remarkable instrumental facility and musical maturity.

After moving to New York to study at The New School and Manhattan School of Music, he started playing with the trumpeter and bebop icon Red Rodney, a veteran who had earned his own stripes playing with Charlie Parker back in the early 1950s.

Potter made his debut recording as a leader whilst still in his early twenties. A fairly straight-ahead set, it was released on Criss Cross, a Dutch label with a cult following that seeks to document the best of the New York scene.

Joining Chris on the front line is trumpeter John Swanna, while his young colleagues in the rhythm section – Kevin Hays (piano), Lewis Nash (drums) and Christian McBride (bass) – would all go on to have stellar careers of their own.

This 1996 recording offers a rare chance to hear Potter in an intimate duo setting. His partner here is pianist and Effortless Mastery author Kenny Werner.

Recorded live at Maybeck Recital Hall, the programme features original compositions by both players, plus some well-chosen standards. Tom Harrell’s lovely “Sail Away”, featuring Potter on soprano saxophone, is a particular highlight.

The title of this 1998 album refers to one of the symptoms that Potter suffered when he went through an unpleasant and scary bout of Ménière’s disease, a condition of the inner ear that caused severe dizziness and loss of hearing in one ear.

This programme of original music helped confirm the tenor saxophone player’s move towards a more contemporary, introspective sound world, in comparison to his hard bop-adjacent roots.

“Modeen’s Mood” is a dedication to the drummer Paul Motian, who both Potter and Lovano have played with as sidemen.

Vertigo was named one of the top jazz CDs of the year by both Jazziz Magazine and the New York Times.

In 2000 Potter (still only in his late twenties) was selected as the winner of the Jazzpar prize, one of the most prestigious awards in Danish music.

This was not an insignificant endorsement of his talent, with the list of previous winners including the likes of Lee Konitz, Roy Haynes, Tommy Flanagan and Geri Allen.

As part of the festivities surrounding his receipt of the award, Chris’ band played a set, which was recorded live for release on the Danish Storyville label.

The centrepiece of the album is a six-part suite written especially for the occasion.

Meanwhile, the title track, after opening with an impressive solo sax cadenza, turns out to be an original melody written over the chord sequence to the standard “My Shining Hour”.

Tribute or themed albums are relatively common in jazz, but they will usually focus upon the music of a single musician or composer.

Potter took a different approach on this 2001 album, by opting to pay homage to a whole range of his saxophone heroes from across the history of jazz.

With most of the material composed by Potter himself, each piece is dedicated to a saxophonist who has influenced him, which provides a fascinating insight into the makeup of the tenor player’s own sound world.

There are tributes to:

The album closes with an unaccompanied rendition of the ballad “What’s New”, with Potter looking towards the future of jazz in a dedication to “the current generation” of musicians.

Lift: Live at the Village Vanguard

Chris Potter is at the top of his game on this 2004 live album from legendary New York jazz club The Village Vanguard.

By recording at the Vanguard he joined an illustrious list: Sonny Rollins, Bill Evans, John Coltrane and many other legends of the music have recorded seminal live dates at the Greenwich Village venue.

The climax is an impressive 13/4 arrangement of Charles Mingus’ “Boogie Stop Shuffle”, replete with an epic solo sax intro.

The no-nonsense acoustic quartet lineup is completed by Kevin Hays on piano, Scott Colley on double bass and Bill Stewart on drums.

“Lift is a sharp, tough, and streetwise record of a fine gig played in a jazz temple with aplomb and sass. It points in new directions and offers a solid portrait of the artist as not only a strident voice, but as a visionary as well”. – Thom Jurek, All Music

The more amplified sound heard here is provided by Craig Taborn on Fender Rhodes, Wayne Krantz and Adam Rogers on guitars and Nate Smith on drums.

This ensemble and its gritty brand of 21st Century fusion would become a significant part of the leader’s musical life over the next decade or so.

He toured as Chris Potter’s Underground extensively, and the lineup (now with Adam Rogers solely established in the guitar chair) would return for the albums Follow The Red Line (2007) and Ultrahang (2009).

The original Underground album closes with a dream-like cover of Lennon and McCartney’s “Yesterday”.

This 2011 release features the saxophonist as guest soloist with the DR Big Band, the Danish Radio jazz orchestra based in Copenhagen.

Not content with playing ensemble parts and soloing extensively, Potter also composed and arranged all the music here, showing himself to be an extremely skilled large ensemble writer and orchestrator.

This dense set of driving modern big band music features some highly compelling playing from both Potter himself, and from the excellent supporting cast of Northern Europeans, with trumpeter Mads la Cour playing a particularly strong solo on “New Year’s Day”.

Two years later he released Imaginary Cities, his second album for the label. This ambitious project features his fusion-centric Underground band augmented by a string quartet.

The expansive set of original music met with rave reviews from critics, with All About Jazz’s John Kelman describing it as “the first real masterpiece of 2015”.

In 2019 Potter signed to Edition Records.

Up until fairly recently, Edition had largely worked with European artists, so the American’s arrival was certainly something of a coup for the UK-based independent label.

Circuits saw him return to an amplified band sound that was reminiscent of his Underground group, with young Houston native James Francies on keyboards, Linley Marthe on electric bass, and virtuoso drummer Eric Harland completing a powerful rhythm section.

His journey to becoming one of the most influential and popular saxophonists in modern jazz has seen him play as a sideman on more than 150 albums, including records by the likes of Joanne Brackeen, Steely Dan, fellow saxophonist Wayne Shorter, bassist Dave Holland, drummer Paul Motian, James Moody and Steve Swallow, in addition to his 22 as a bandleader.

He has also won various major prizes, including a Grammy Award, Denmark’s Jazzpar Prize, as well as finishing top of various Down Beat polls.

“Music has always been a vehicle for me to investigate the things that are important about life. It’s been a way of figuring out what it is I need to say. Plus, I keep learning new things about it.” Chris Potter