The Story of A Great Day In Harlem

Arguably the most iconic photo in jazz history, the 1958 snap of 57 legendary jazz musicians on the steps of a Harlem brownstone gives a fascinating look into the late 1950s New York scene…

Critic Whitney Balliett once described jazz as “the sound of surprise“, but within the genre the surprises come in other guises too.

These can often come in the form of anecdotes or visual images as is the case in the remarkable photograph taken by a young photographer in 1958, that has since become known as A Great Day In Harlem.

This black and white photograph has since become synonymous with the jazz scene in New York in the late fifties.

It seems to capture the essence of the music and the musicians, and the variety and history inherent in this great American art form. 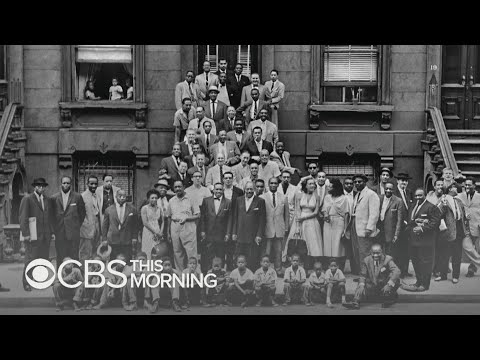 This historic photograph was commissioned by Esquire magazine was for the cover of their 1959 Golden Age of Jazz edition, and the young man tasked with the job of capturing the essence of jazz for the cover artwork was Art Kane.

Kane was a young art director and amateur photographer and jazz enthusiast when approached by Esquire, and remarkably this was his first photoshoot.

With the idea of taking a photograph of as many of the leading jazz musicians in the city as he could, he put the word out that a photoshoot would take place at 17 East 126th Street, between Fifth and Madison Avenue in Harlem for the feature on jazz in Esquire.

The arrangements by today’s standards sounds a little vague.

Word of mouth could be a precarious method of communication, and it would be easy for time, date and venue details to become confused and mixed up as word travelled.

With no mobile phones or internet trying to gather an unknown number of people in the same place and the same time was fraught with danger. To get jazz musicians to perform this feat was seemingly even more risky.

Many of the musicians would have been working the night before and with clubs open until the early hours of the morning, some would have had little or no sleep.

A nervous Art Kane could do no more than arrive at the designated venue and wait, along with.

What would happen next is the stuff of legends, and the stunning photograph that is the result captures some of the greatest musicians of the time.

The designated shoot time of 10.00am came and went with a steady trickle of musicians arriving at 17 East 126th Street, and much to Kane’s amazement there were many more that would make their way address in Harlem.

As the numbers swelled, this presented another problem for Kane. Many of the musicians had not seen each other for some considerable time.

As their working commitments would keep them from friends and fellow musicians who would all be working similar hours the opportunity to socialise and catch up just did not exist.

As a result, as people arrived for the photoshoot they would meet up with old friends, and very quickly the street would fill up with small groups gathering to catch up.

How Kane was going to get so many people in the right place for the photograph he envisaged was proving t be a headache.

Eventually, and some considerable time after 10.00am, a total of no less than fifty-seven musicians had turned up for the event. 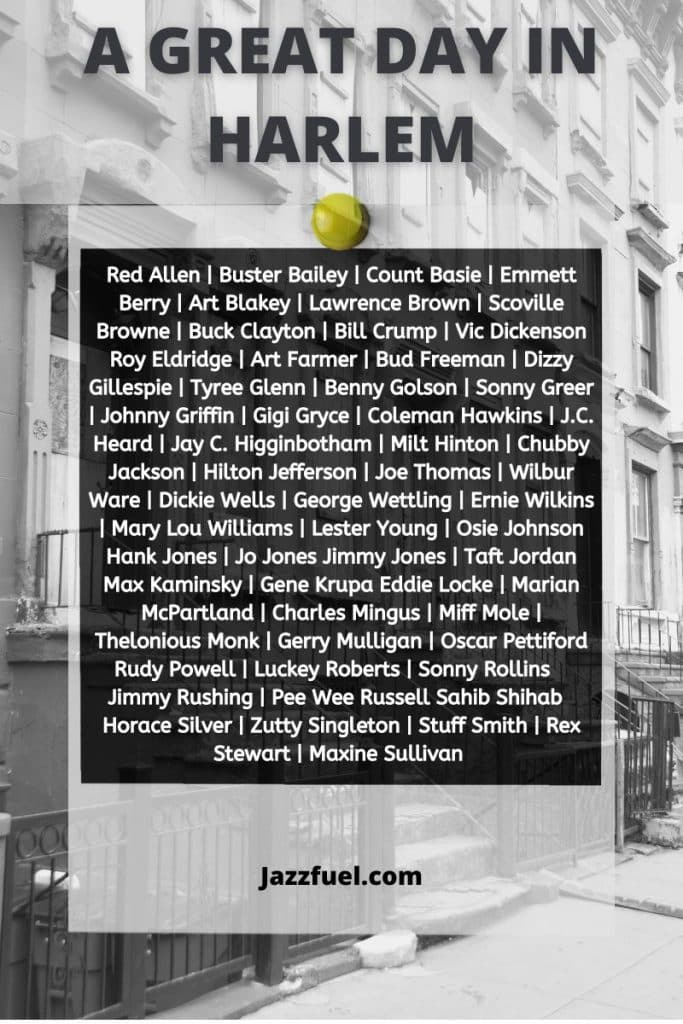 With much effort, conversations interrupted for long enough to get everyone into some sort of formation in front of the building, Count Basie can be seen sitting on the kerb alongside some of the local children who had inveigled their way into the shot, as the photograph was taken.

It was later divulged that it would have taken more trouble to remove them from the scene than to capture was happening at the time out of natural curiosity.

Even when some semblance of order had been established, chaos still ensued as musicians carried on their conversations, constantly moving about amongst themselves.

In the end several shots were taken, and it would be left to the editors at Esquire to determine the best picture to use.

Taking a close look at the photograph that made it onto the front cover of the January 1959 issue of Esquire, you can see how the musicians had appeared to dictate informally the form of the image captured, with the pianists gathered in a group in one segment, and the saxophonists, drummers, in other parts of the photograph.

This natural order of things could not have been predetermined, and would have been a logistical nightmare to have attempted to pull off.

All in all a unique view of the jazz scene in New York City in 1957 captured for posterity.

A Great Day In Harlem – The Documentary

As with all great art, A Great Day In Harlem has stood the test of time, and its value in capturing a moment in time that will never be seen again has become ever more important.

So much so that in 1994 director Jean Bach made a documentary under the same name, using bassist Milt Hinton’s photographs (he always had his camera with him) and home video footage shot by Hinton’s wife, Mona on her 8mm movie camera as the basis for the film.

This film includes interviews with among others Dizzy Gillespie, Horace Silver, Marian McPartland, Sonny Rollins and of course, Art Kane himself.

Kane is suitably self-effacing, recounting just how inexperienced and nervous he was, even to the extent that he was given a camera by his assistant in which the film had been loaded incorrectly.

The film was nominated for an Academy Award for Best Documentary Feature, and described by none other than Whitney Balliett as “a brilliant, funny, moving, altogether miraculous documentary.”

The documentary is also invaluable for including film excerpts of performances by Lester Young, Ben Webster, Willie “The Lion” Smith, Maxine Sullivan and Thelonious Monk which greatly enhances appreciation of the visual aspects of the film.

Nevertheless, it also serves as a reminder of why the subjects of the photoshoot were such an important and vital part of American culture and history.