We may be familiar with the most famous jazz drummers in history, but what about those bringing the music firmly into the 21st Century?

In this article, we’ll have a look at 13 of the best modern jazz drummers on the scene; those who are not only the first choice for contemporary jazz artists, but pioneers unto themselves.

Since the beginning of jazz, drummers have been an integral part of moving the music forward.

They have a direct influence not only over the rhythms of the ensemble, but also tempo changes, form, dynamics, texture and the idiosyncratic ‘sound’ of the band.

Gone are the days of the drummer sitting at the back keeping time; in 200m they are expected to be as much an instrumentalist, bandleader and composer as the next musician, and as likely to have albums and projects under their own names as they are to be a prolific sidemen and women.

The list below comprises not only of drummers of modern jazz, but also modern drummers stretching the instrument to its limit; they will be pushing ahead and inspiring us for many years to come.

We’ve picked a recommended album to listen to for each, too, but of course there are many more out there for you to discover on your listening platform or record store of choice. 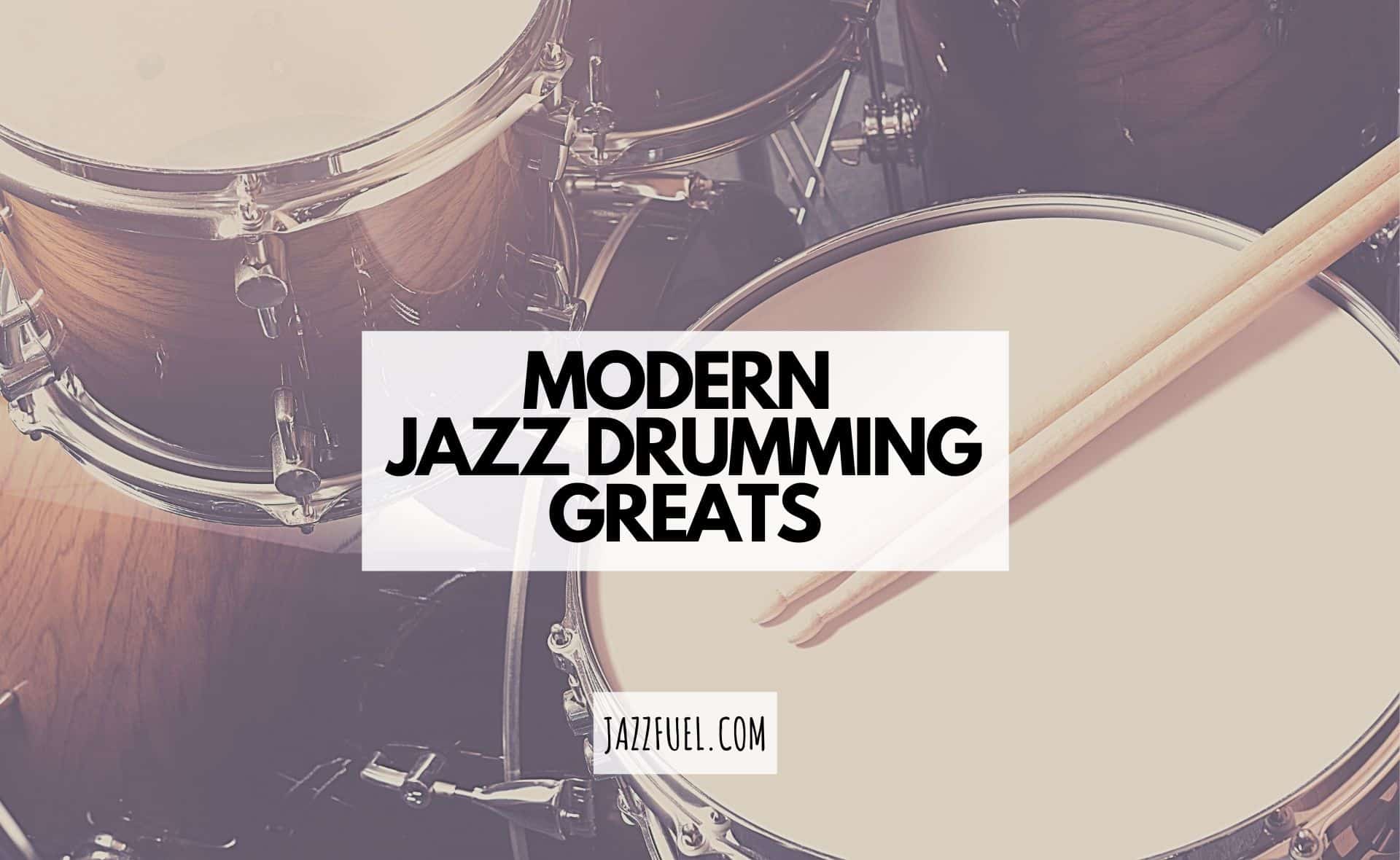 Brian Blade’s sideman resumé boasts trailblazers such as Chick Corea, Herbie Hancock and Wayne Shorter, while his own projects – as an Americana singer/songwriter (Mama Rosa, 2009) and with The Fellowship Band – have been met with critical acclaim.

Brian Blade is one of the most versatile musicians of our time, able to work with a variety of artists, from Joni Mitchell and Bob Dylan to modern sax greats like Joshua Redman and Mark Turner.

Hear him on Wayne Shorter’s Without a Net (2013) for some explosive and multidirectional drumming. Blade as much contributes to the soundscape of the music as he provokes his fellow musicians into going further out.

Well known as a fierce technician and master of odd time-signatures, Eric Harland studied at the Manhattan School of Music at the recommendation of Wynton Marsalis.

His discography shows that his talent is endorsed not only by jazz legends such as Charles Lloyd, Dave Holland and McCoy Tyner, but also cutting-edge modernists like Kurt Rosenwinkel, Walter Smith III and Chris Potter.

As a leader, Harland has released three albums, the latest of which 13th Floor (2018) is well worth a listen. Incorporating irregular metres and fusion jazz grooves, the drumming here takes no prisoners.

New York-based drummer Allison Miller moved to the city shortly after graduating university and has carved out a reputation as an in-demand musician, educator, bandleader and side-musician.

Her work as a side-musician has seen her collaborate with artists including Brandi Carlisle, Dr. Lonnie Smith, Patricia Barber and Ben Allison, as well as being part of the all-female jazz group Artemis.

In terms of drum technique, her educational lineage can be traced back through the greats: “Michael [Carvin, her teacher] had studied with Philly Joe Jones, who’d studied with Charley Wilcoxon, the percussionist who wrote the classic snare textbook for drummers. So, I’m a part of that lineage.”

But whilst she arrived in New York a relatively straight-ahead drummer, her work has gone on to embrace a wide spectrum of styles taking in contemporary jazz, avant garde and more mainstream music.

Growing up in Iowa in the 1970s, Bill Stewart began by playing in cover bands and was propelled to fame when working with John Scofield as well as funk legend Maceo Parker in the early ’90s.

He is a member of a powerhouse organ trio with Larry Goldings and Peter Bernstein, one of the longest running groups of today, and has proved himself as a multifaceted musician, composer and bandleader.

Stewart’s drumming style is lilting and dynamic, with a melodic focus. He tends to lend equal significance to all areas of the drum kit, layering polyrhythms to great effect.

The album Toy Tunes (2018) with Goldings and Bernstein showcases not only his unique playing but also his quirky compositional approach.

The youngest of this collection of modern jazz drummers, Justin Faulkner was a child prodigy who played his first professional engagement at 13.

Attending specialist music schools such as The Girard Academic Music Program in Philadelphia and Berklee College of Music in Boston, he studied extensively with Art Blakey protégé Ralph Peterson.

Faulkner went on to replace drumming titan Jeff ‘Tain’ Watts in Branford Marsalis’s quartet in 2009 – a ringing endorsement not to be understated – and, although his CV is not as broad as some others, his musicianship certainly is just as mature.

We have lots to look forward to with this drummer, but for now check him out on Marsalis’s latest album, The Secret Between The Shadow and The Soul (2019).

Born into a jazz family (her grandfather played with Fats Waller!), Terri Lyne Carrington emerged as a child prodigy in the late 70s and has been a fixture of the international jazz scene ever since.

Mentored first by Clark Terry then Jack DeJohnette, she moved to New York in the early 80s and has since played with fellow jazz greats including Stan Getz, Dizzy Gillespie, Herbie Hancock, Wayne Shorter and countless others. Her debut recording in 1989 was Grammy award-nominated and she has released a host of acclaimed releases for labels including Concord, Verve, Motema and ACT Records.

Arguably the most influential female jazz drummer of the modern era, she serves as founder and artistic director of Berklee’s Institute of Jazz and Gender Justice which you can read more about here.

Descended from jazz royalty, Marcus Gilmore is the grandson of the iconic ‘snap, crackle and pop’ Roy Haynes and nephew of Graham Haynes, co-founder of the influential 1980s M-Base Collective.

It therefore comes as no surprise that he has worked with musicians at the forefront of modern music such as Vijay Iyer, Steve Coleman and Ambrose Akinmusire.

His technical prowess on the drums allows him to treat the instrument melodically (musically satisfying sequences of notes), harmonically (combinations of sounds in rhythmic unison) and polyphonically (the layering of two or more melodies).

Often using ‘matched grip’ (where the left hand holds the stick in the same way as the right), he has the freedom to play not only across the drums fluently but also adjust the tone of the drums by how long the stick is in contact with the head.

Listen to Walter Smith III & Matthew Stevens’s In Common (2018) and hear for yourself!

Son of Freddie Waits, member of and composer in Max Roach’s famous M’Boom percussion ensemble, Nasheet originally studied psychology and history in Atlanta before receiving a BA in Music from Long Island University.

He was Jason Moran’s chosen drummer for many of his seminal albums in the 2000s, and has been associated with other progressive musicians such as Fred Hersch, Tony Malaby, Dave Douglas and Mark Turner.

It is not just Waits’s association with modernists which marks him out as a top modern jazz drummer, however.

His ability to move seamlessly between ‘in’ the time, ‘against’ the time, and ‘over’ the time gives him the flexibility to phrase in a way which is profoundly up-to-date.

A good example of this can be found on Ethan Iverson’s album The Purity of The Turf (2016).

Virtuoso jazz and rock drummer Cindy Blackman Sanata (yes, that Santana!) has been a stalwart of the music scene since the early 80s when she was showcased on a popular New York station’s “Jazz Stars of the Future” show.

Her career in jazz, both as a bandleader and side-woman, has seen her work with some of the contemporary jazz greats including Kenny Garrett, Joe Lovano and Steve Coleman as well as living legends like Pharoah Sanders, Ron Carter, Sam Rivers and Joe Henderson.

Away from jazz, she is an in-demand session musician perhaps best-known for her almost 2-decade stint with Lenny Kravitz.

Tyshawn Sorey evades categorisation, incorporating elements of jazz, folk, drum & bass, free improvisation, and twentieth-century classical music into a style and approach unlike any other.

He has not only studied jazz performance formally, but also holds an MA and doctorate in composition, and in 2017 was awarded the MacArthur Fellowship (colloquially known as the ‘genius grant’).

Tyshawn Sorey regularly expands the traditional drum kit set-up to include orchestral and world-percussion instruments and has been known to conduct sections of his own compositions.

Having performed and recorded regularly with jazz visionaries such as Vijay Iyer, Steve Lehman, Anthony Braxton, Evan Parker and John Zorn, Sorey is clearly a far-sighted artist whose concept of music spans many levels.

His sound world is weird and wonderful: his latest album with violinist Jennifer Curtis Invisible Ritual (2020) is largely freely improvised and is an example of both modern drumming and modern music.

A diverse portfolio is a key theme in this list of modern drummers, and Nate Smith is no exception.

He has been given the seal of approval from the jazz community for his work with luminaries such as Dave Holland and Chris Potter, but is also a member of funk band Vulfpeck and has even released a solo drum album.

Listen to the latest from Nate Smith on his self-penned and self-produced EP Light and Shadows (2020).

Musicians in 2021 are not only expected to be great technicians, performers, composers, producers and self-publicists, but also educators.

Ari Hoenig ticks all these boxes, and has written several instructional books regarding drumming and music.

Widely regarded as an odd-time-signature specialist with a relentlessly clarified beat, Hoenig spent part of his education at The University of North Texas, playing in the prestigious One O’Clock Band.

One of Ari Hoenig’s many contributions to modern jazz is an interest in ‘metric modulation’, where the tempo of the music seems to change to a faster or slower rate; this gives the impression of gear shifts.

Another is playing melodies quite literally on the drums – this is better heard than described, as a listen to his album Inversations (2013) should demonstrate!

Mark Guiliana caught the jazz scene’s attention when Avishai Cohen employed him in his group, after graduating from William Paterson University in 2003.

Guiliana went on to perform and record with many of modern jazz’s leading lights, including Brad Mehldau, Dave Douglas and Lionel Loueke, and his interest in electronic music has led him to form his own project, Beat Music.

For Mark Guiliana, combining electronics and acoustic drums means both using drum loops and drum machine sounds (such as can be found on the famed Roland TR-808 drum machine), but also mimicking the sound and style borne out of the electronic music movements of the ’80s and ’90s.

In a jazz context, this means assimilating a rhythmic approach not found in traditional drumming, and in this Guiliana has discovered a niche.

He found a wider audience when asked to participate in David Bowie’s final album Blackstar (2016) by colleague Donny McCaslin, which is highly recommended.

Thanks for reading and hope you found some new top jazz drummers to check out from this roundup of modern greats.

If you’re looking to discover more about the ‘legends’ we made a list of the most famous jazz drummers in history for you, as well as this in-depth look at the life and albums of the legendary Tony Williams.

We also published a guide to 10 jazz drum legends and their choice of setups and gear.