The Best Drum Songs Ever (All Styles Considered!) 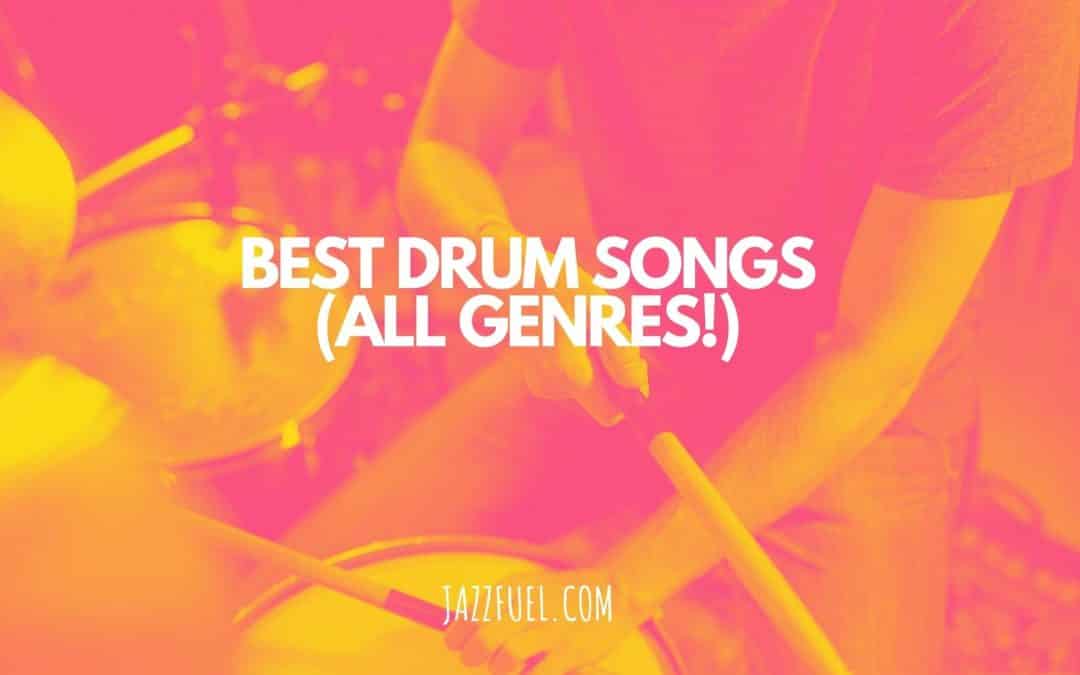 Whilst it’s useful to put music into specific styles and sub-genres, sometimes it’s fun to take a step back and simply appreciate songs for the skill or musicality displayed.

Regardless of genre, most music would be nowhere without a drummer at the back, laying down the beat.

And whilst many musicians spend their entire career playing within one specific genre, it doesn’t mean that their influences can’t be heard far outside of this community.

So, in tribute to those players whose careers have spawned a whole generation of fans or wannabe musicians,  we’ve put together a list of some of the best drum songs of all time; performances where the drummer has (intentionally or not) taken centre stage.

Ready? Then let’s get right into it!

The Best Drum Songs of All Time

Phil Collins is a legendary musician, and In the Air Tonight is often regarded as his most well-known song. The drums in this track are held in high regard for their sound, despite being almost unnoticeable for the first half of the song.

The reverb sound Collins achieved was actually an accident, but definitely one that’s more than welcome.

For most of the song, the drums play a subtle backseat and mostly help with providing its dark atmosphere. However, near the end they suddenly burst into an explosive drum fill that releases all the tension that has been building up to this point.

Even if you don’t know this song by name, chances are you’re familiar with its masterful combination of swing and jazz.

While the saxophone is one of the most memorable aspects of this track, it’s also impossible to forget the incredible drum solo that ties it all together.

For most of the song, Joe Morello uses light cymbal hits to keep the tricky 5/4 time signature going.

However, when it comes to the solo he breaks out the rest of his drum kit.

Despite his solo taking up over half the song’s runtime, Morello doesn’t go overboard. With rolling snare hits echoing a military march and the tom drums building up over time, Take Five is a masterpiece of subtlety.

Going straight from jazz back into psychedelic rock, Sunshine of Your Love brings some of Ginger Baker’s best. It’s almost easy to ignore the other instruments to focus solely on the clash of cymbals and complex fills.

Even during the song’s guitar solos (which are also incredible), Baker is the star of the show.

When the song reaches its end, the cacophony of cymbals combined with rhythmic bass drum beats provide the perfect conclusion to this psychedelic classic.

At 7 and a half minutes, 21st Century Schizoid Man has a lot going on. In The Court of The Crimson King is renowned for its often cacophonous and hectic songs, and its opening track is no different.

The rhythm, time signature, and style of the song changes multiple times throughout its runtime, and it’s hard to keep track of what’s going on.

At least, it would be hard if drummer Michael Giles wasn’t there to keep everything in check. Somehow, the pounding drums not only coordinate all the other instruments, but also manage to adapt to every change the song throws in.

While everything else seems random and chaotic, the incredible drumming ties it all together and keeps the whole song under control.

Add in those ultra-fast blast beats at the end and you have a thing of true beauty.

Ringo has sometimes been criticized for his relatively simple drum beats. However, Come Together proves why he belongs in the most famous band of all time.

If the pounding bass drum isn’t enough, the subtle high-hat hits and rolling fills will. Ringo also builds up his drumming really cleverly throughout the song.

It can be hard to notice without a second listen, but once you hear how he layers each aspect of the kit on you’ll never stop appreciating it.

6) Won’t Get Fooled Again – The Who (Drummer: Keith Moon)

Speaking of great drum fills, The Who’s drummer Keith Moon uses them perfectly in this 8 and a half minute track.

It’s hard to think of a more iconic drummer than Keith Moon, and his bombastic backing and increasingly complex fills prove why.

It can be easy to keep things simple or repetitive in a song this long, but during Won’t Get Fooled Again Moon manages to keep things fresh and interesting the entire time.

Without his explosive fills and eccentric style throughout this song, it’s likely that it wouldn’t be the classic we love.

Iron Butterfly’s iconic magnum opus, In-A-Gadda-Da-Vida has some of the best drums in psychedelic rock.

Not only does Ron Bushy’s heavy but simple drumming make the perfect backing for the guitars and vocals, but the song also features a whopping 5-minute drum solo.

Even when the guitars and keyboard start creeping back in, the drums are still the main focus for further 5 minutes.

It’s no exaggeration to say that the drums are the highlight of this 17-minute long track, and help make it the classic it remains to this day.

This rock classic has an iconic intro. But did you know that it’s not actually a motorbike revving at the start? The motor noise is actually drummer Alex Van Halen layering four different bass drums together.

While Alex is often overshadowed by his guitarist brother Eddie Van Halen, this track is a great example of how the siblings showcased the best of their respective instruments.

With his innovative use of fills and the combination of blazing cymbals and bass drum, Hot For Teacher proves why Van Halen became one of the biggest rock bands in history.

Iggy Pop has famously stated that this song’s lyrics are based on a poem by The Doors’ Jim Morrison. However, when you listen to the drums in this track it’s clear that the lyrics aren’t the only poetry here.

While the drumming may seem simple at first, it quickly becomes the focal point of the song. The perfect accompaniment to Iggy Pop’s vocals, the drums provide a lot of the song’s emotional build-up.

As the song progresses the drums add more and more layers, until you’re left with the crash of cymbals punctuating every line.

This doesn’t drown out anything else, though, and only serves to bring the song to a glorious climax.

So there you are: some of the best drum songs ever performed.

These are far from every song with great drums, and if you haven’t heard any of the songs here, there’s nothing better to do than give them a listen.

Sorry if we’ve missed any of your favourites out – there are way too many great drum songs to fit on any list. Nonetheless, we hope you’ve enjoyed looking at some of these great tracks!

Looking for more drums? Check out our pick of the best modern jazz drummers today, or the classic list of drum greats.