A Complete Guide To Scales And Modes In Jazz Music 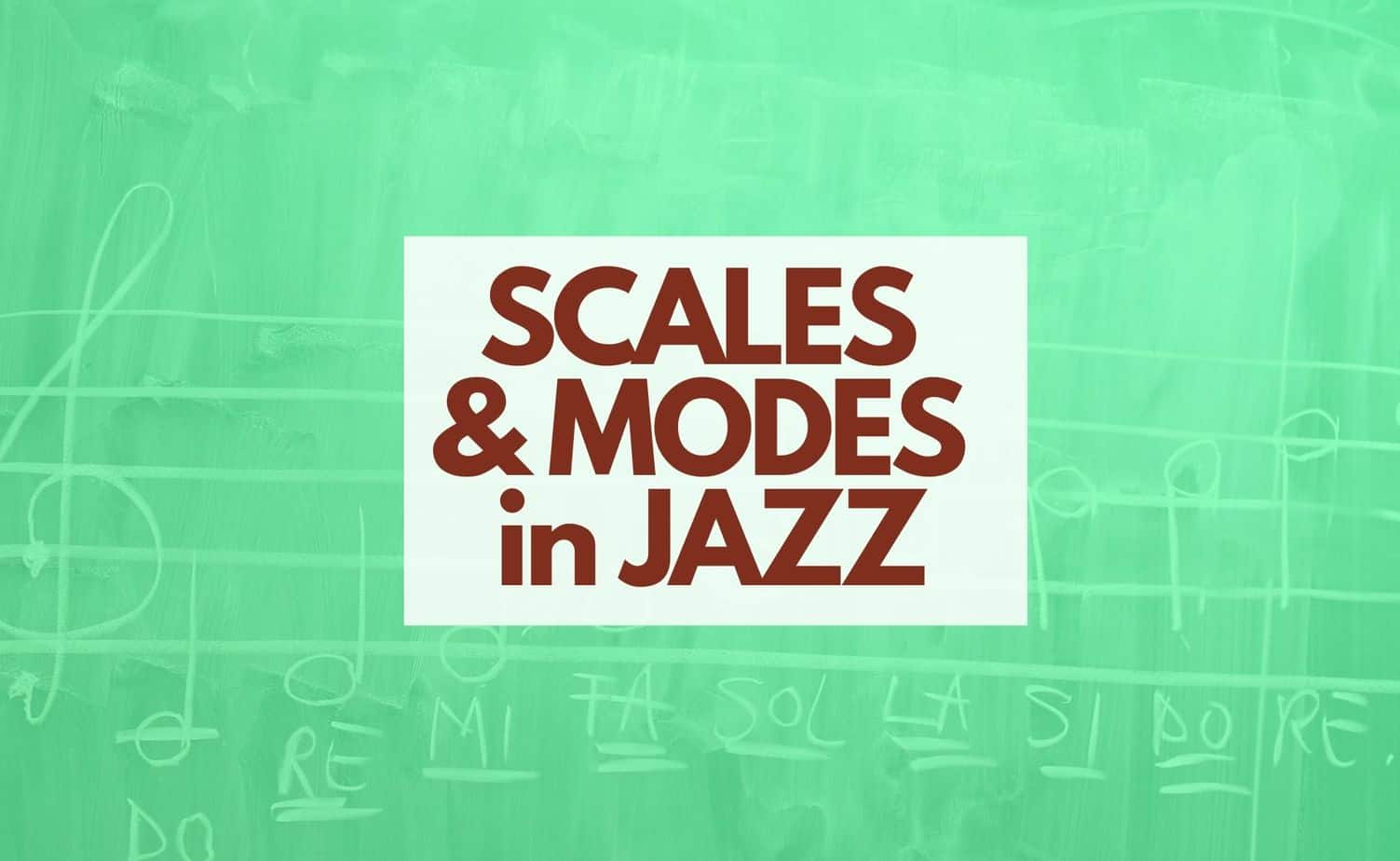 Jazz scales and modes are by no means the be-all and end-all when it comes to improvisation, but they are an important part of your musical education.

In this article, we’ll take you through the various types of jazz scales and modes and share some examples of where they’re used.

Most common, are the modes of the major scale:

But we’ll also look at others including modes of the melodic minor scale, the harmonic minor scale and the whole tone scale.

You can’t just ‘noodle’ within a mode and expect it to sound like the real deal: a great jazz solo (like these 11 classics here) also needs authentic vocabulary, strong rhythm and so on.

But as a 21st Century jazz musician, it’s a really good idea to practise your scales and modes, and to understand how you can use them. In fact, there are plenty of great instructional books on how to learn and practice these.

Prior to 1959, many of the great jazz musicians wouldn’t have been thinking about scales when they improvised.

But, despite that, a ready knowledge of this area of jazz theory can really help you understand what the greats from every era in jazz were doing – even if they weren’t all necessarily thinking of scales themselves!

Whatever way you look at it, learning about this is useful.

Knowing all the jazz scales and modes is really good for you on a technical level: it will help your finger dexterity and the evenness of your sound across the range of your instrument.

And, on top of that, it will also help you to become comfortable improvising in all 12 keys, some of which naturally tend to feel less familiar.

You might also want to check out our in-depth guide to jazz chords alongside this, as the two topics are very interconnected.

In any case, read on for an introduction to the most common jazz modes and scales…

Lots of jazz composed from the 1960s onwards – modal music, or contemporary jazz that uses slash chords or non-functional harmony – requires an understanding of modes to be played effectively.

A modal approach can also be applied to tunes with more ‘functional’ harmony – bebop compositions, jazz standards and the like – in various ways.

The standard classical pathway of learning an instrument tends to teach us the main major, harmonic minor and melodic minor scales. But from these we can derive lots of other scales, or modes, each of which has its own distinctive sound.

The purpose of this guide isn’t to list every single mode that can be derived from each scale, but rather to talk about some of the most commonly used ones, and to illustrate how they can be utilised and where you can find examples of them in compositions and on recordings.

The modes of the major scale

The major scale is the first one that most people learn, and its seven modes are also the most well known:

Of course, the fact that these are derived from the major scale doesn’t mean that all of the individual modes have a major tonality.

For example, Dorian, Aeolian, Phrygian and Locrian can all be characterised as types of minor scale, as the third degree of each is flattened.

This is simply another name for the major scale, so probably you already know it, and you’ve probably already improvised with it.

This one obviously works on most major chords, but you can also use it in a broader approach to a section of music that sticks to a given major key centre.

For example, if you use B flat Ionian over the first four bars of ‘Autumn Leaves’, or the A sections of a Rhythm changes, or in fact any II-V-I cadence into B flat major, you can’t go too far wrong.

This scale should generally be your go-to jazz scale choice on a minor seventh chord.

It’s a minor mode with a flattened seventh but a natural sixth, and you can work it out by playing any major scale starting on the second degree.

Miles Davis’ ‘So What’, the most famous modal jazz tune of all time, uses long stretches of D Dorian in the A sections, before going up a semitone to E flat Dorian in the bridge.

The Lydian is like a major scale but with a raised fourth, which gives it an even brighter sound.

In fact, when modern jazz composers write major seventh chords they often mean a Lydian, rather than Ionian, sound, even if they don’t specify the sharp eleventh (or raised fourth).

You can also play a Lydian scale on major chords in more functional settings to create a distinctive, brighter sound.

The Lydian scale is the fourth mode of the major scale.

The Mixolydian is like a major scale, but with a flattened seventh, and is the most basic scale option for a dominant seventh chord, and also for sus (suspended) dominant chords, like the ones heard in Herbie Hancock’s ‘Maiden Voyage’.

When becoming familiar with these modes it may be easier at first to think of each one in relation to its parent scale.

For example, Lydian is the fourth mode of the major scale, so if I want to play the A flat Lydian mode I work out the notes by first thinking of E flat major, its parent scale, to find the key signature.

But it may ultimately be more useful to try to think of each mode as a separate entity with its own sound.

Why not try to sing a Lydian scale, then play it through all the keys? Then do the same with the other modes.

The modes of the melodic minor scale

In fact, some of them don’t even have universally agreed-upon names: the second mode of the melodic minor can either be described as a Phrygian scale with a natural sixth, or as a Dorian scale with a flattened second.

The melodic minor scale itself (sometimes referred to as the ‘jazz minor’) should be your go-to scale choice on tonic minor chords, and on minor sixth chords and minor chords with a major seventh.

For example, listen to how Miles Davis emphasises the E natural over the G minor chords in the head of ‘Autumn Leaves’ (Cannonball Adderley – Something Else).

The fourth mode of the melodic minor is the Lydian Dominant scale.

It’s the go-to scale choice on secondary dominant chords (the dominant of the dominant, e.g. D seventh in the key of C major), such as bars three and four of ‘Take The ‘A’ Train’, or bars 13 and 14 of ‘Donna Lee’.

And also in a ‘back door cadence’, where a dominant chord built on the flat seventh of the home key resolves to the tonic chord.

For example, in the fourth bar of ‘Just Friends’ you’d play an F Lydian Dominant scale on the F seventh chord before it resolves to G major.

This is the name for the seventh mode of the melodic minor.

In jazz we often ‘alter’ the notes of dominant chords to give them more flavour, to create more tension before we resolve to the tonic – for example, the use of a flattened ninth rather than a regular ninth.

The Modes of the Harmonic Minor

The harmonic minor scale is notable for its distinctive jump of a minor third between its sixth and seventh degrees, although its first mode is not used that frequently in jazz improvisation.

Its fifth mode – so the notes of C harmonic minor starting on G, for example – is sometimes called the Spanish Phrygian, or the Phrygian Dominant.

This is used to imply the sound of a dominant chord with a flattened ninth and a flattened thirteenth, and this sound is used commonly in Bebop, although those players may not have thought of it in these terms.

This works well on dominant chords that resolve in a minor key: The C seventh chords in the A sections of ‘Caravan’ are a good example.

The diminished scale is composed of alternating tones and semitones (whole steps and half steps).

It’s a symmetrical scale, or a ‘mode of limited transposition’, which means that is only has three transpositions (up or down in semitones) before we get the same notes again.

This scale is an option on dominant chords, and implies a flattened ninth, but a natural 13th.

The Billy Strayhorn tune ‘Upper Manhattan Medical Group’ implies this sound on a number of chords. You can also use this to spice up regular dominant chords in II-V-I progressions.

The symmetrical nature of the diminished scale means it lends itself to patterns: players like George Coleman and Hank Mobley use these to create this sound.

The ‘whole-half’ diminished scale starts with a whole tone followed by a semitone, and is used on diminished chords, like the second chord of Jobim’s ‘How Insensitive’.

As the name suggests, the whole tone scale is made up entirely of whole tones.

It’s another ‘mode of limited transposition’ and there are only two variations of it before you get repetition: C, D, E, F sharp, G sharp and A sharp whole tone scales are all the same, just starting on different notes.

Whole tone harmony has a very distinctive, unsettled sound due to its lack of semitones.

The whole tone scale is used on dominant chords that have both an augmented fifth and a natural ninth.

The classic example is the first eight bars of Wayne Shorter’s ‘Juju’, which specifically uses a whole tone sound in a kind of static modal context (this is not a dominant chord that resolves to a tonic).

The sound is also implied, less explicitly, on the augmented dominant chords which crop up often in early jazz standards, like in the second bar of ‘Foolin’ Myself’.

Some bebop musicians also use the whole tone scale as an occasional distinctive effect on regular dominant chords.

Thanks for reading this introduction to jazz scales and modes and hopefully it’s given  you some good ideas for how to use these.

If you’re looking to dive deeper into this topic, you can check out all of our learning jazz articles.