The Mixolydian Scale [Guide To Modes in Jazz] 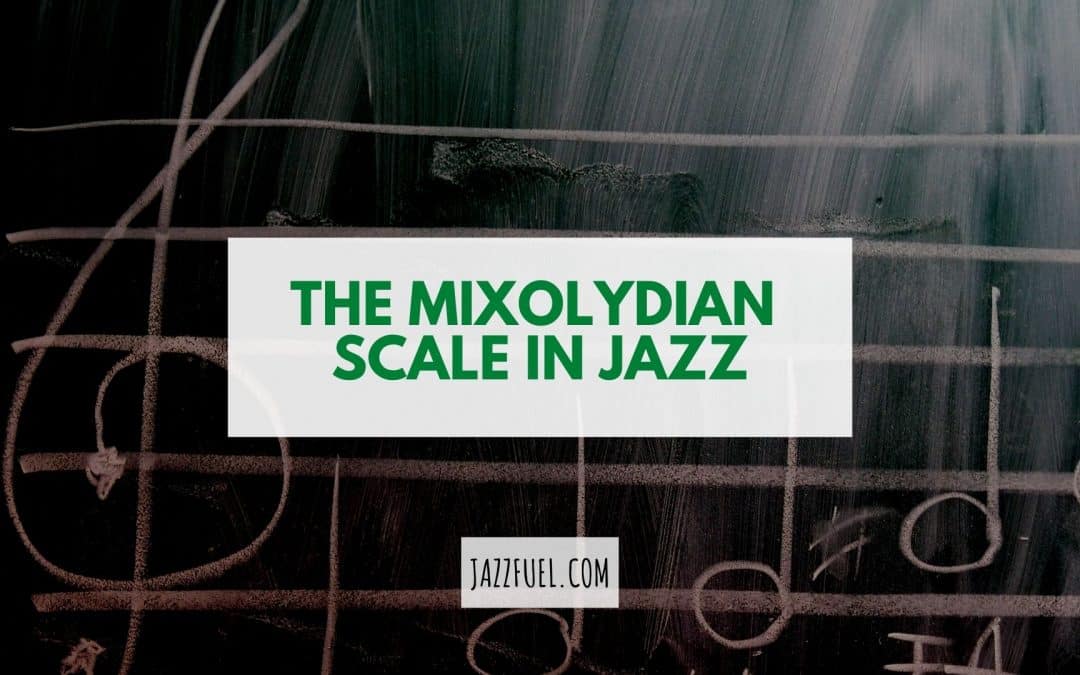 As part of our series on the different scales and modes used in jazz, we shine a spotlight on the mixolydian scale.

Aside from being one of the easiest scales to learn, it’s a versatile and essential tool for every jazz musician’s tool-kit.

Whether laying down the harmony on piano or guitar, or as the improvising soloist, it’s an important one to know and provides part 1 of the ‘tension and release’ that is so prevalent in good music.

What is the Mixolydian scale?

The Mixolydian scale is, theoretically speaking, the 5th mode of the major scale.

Also called the dominant scale, it’s notable for its flattened 7th which creates the question-like tension often found in jazz and blues.

In fact, that flattened 7th is the only thing which differentiates it from a classic major scale (or ‘ionian mode’ to give it it’s other name).

How to play the Mixolydian scale

There are two main ways of finding the same mixolydian scale; whilst you’re still getting familiar with playing this, it’s totally up to you which method you use.

Method 1, is to simply play a major scale, starting on its fifth degree.

For example, take a look at this G major scale:

Count up to the fifth note of it (the ‘dominant’) and then simply play all the notes of a G major scale; you’ll be playing a D mixolydian mode:

Method 2, if you know your major scales, is to play this but flatten the 7th note by a half-step.

As you can see, it’s the same result as the first method!

Flattened notes – particularly 3rds, 5ths and 7ths, have been used since the early days of jazz to inject that blues sound into a song or solo.

As such, the mixolydian mode has been used since the beginnings of jazz – even if the early musicians wouldn’t have called it this.

It really came into its own in the bebop era, when players experimented much more deeply with chromatic playing and chord extensions.

As such, you can hear this scale action on almost every famous jazz album in history post 1940.

Particular artists to listen to for this sound would be:

What chord progressions can you play a mixolydian scale over?

Whilst it is a truly flexible mode, the Mixolydian scale is most commonly used in jazz improvisation over a dominant seventh chord – also called a ‘flat 7th’ chord.

So anytime you see this type of chord – for example D7, G7 or Bb7 – the corresponding mixolydian works well!

Given that the most common chord progression in jazz, the II-V-I, includes this chord, it’s very common.

The examples below highlight the dominant V chord, over which you’d use the mixolydian scale, in bold:

Given the prevalence of the ‘two-five-one’ progression, there are a huge number of jazz standards to practice this over, including:

Practice Improvising with the Mixolydian Scale

There are a huge number of resources and books out there for practicing this scale.

The classic series of educational books by American saxophonist and educator Jamey Aebersold actually include a whole volume for the ii/v/i which is perfect for this.

Aside from that, the best way of learning to play jazz is listening to the greats who came before and transcribing their solos.

All the Mixolydian Scales

Whilst scale practice might not be the first thing you think of when you listen to the legendary musicians from jazz history, having these modes at your disposal is an important step for every student.

The Mixolydian scale is an easy to learn, powerful jazz-blues scale with a huge number of use-cases and, as such, should be near the top of your list!

Here’s the complete list, if you’re looking for a quick-start!

Looking for more jazz scales and modes? Check out our complete overview here, or jump to our article on the dorian scale.