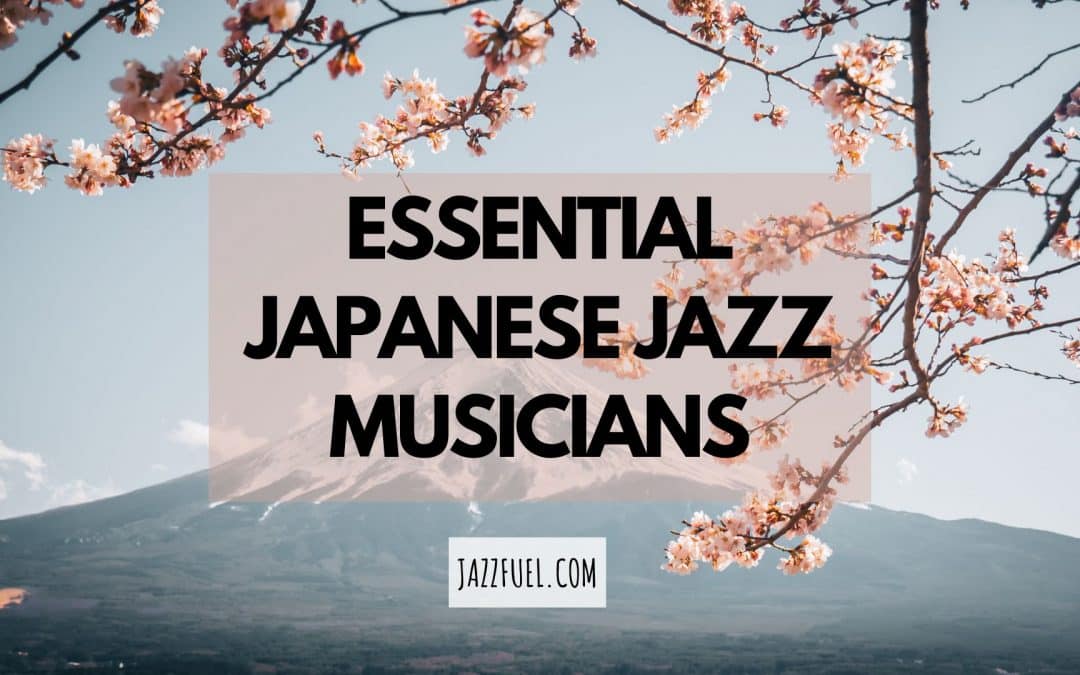 Japan seems to hold a special appeal to jazz musicians and fans alike and, unsurprisingly, there have been a steady stream of incredible Japanese jazz musicians to emerge since the mid-21st Century. In this article we highlight 5 of the most prominent, old and new.

From John Coltrane and Miles Davis to Keith Jarrett and Chick Corea, many of the most famous jazz musicians in history have a connection to Japan.

When it comes to the reverse, though, Japanese jazz musicians are less well-known internationally.

In this article we take a look at a handful of performers from Japan who have played an essential role in developing jazz music there.

Sadao Watanabe is a Japanese saxophonist who plays alto (predominatly) as well as soprano and sopranino saxes and flute. His music has incorporated straight ahead jazz, fusion, bossa nova and classical music.

Born in February 1933, Watanabe took up the clarinet while in high school, influenced to do so after watching the film Birth of the Blues which starred Bing Crosby.

In 1951 he moved to Tokyo and studied flute under the tutelage of classical flautist Ririko Hayashi from the Tokyo Philharmonic Orchestra. He also started playing alto saxophone around the same time.

Performing around the Tokyo area with local bands, he was also a member of a quartet led by pianist Toshiko Akiyoshi. When Akiyoshi left for the U.S., the saxophonist took over a leader of the group.

Recording his self-titled debut album in 1961, Watanabe was himself destined to head for America when a year later he went to study at Berklee College of Music in Boston. 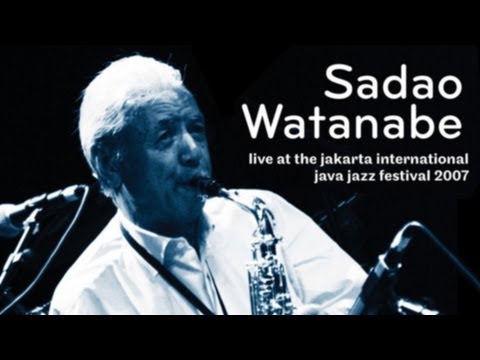 It was while studying at Berklee that he worked with Chico Hamilton and Gary McFarland, and also expanded his musical horizons with his burgeoning interest in Brazilian music and Bossa Nova. After completing his studies, the saxophonist returned to Japan and taking up a position as director of the new Yamaha Institute of Popular Music.

He would also continue to play, performing his own unique brand of bebop with his own quartets, and even got to play alongside John Coltrane in 1966 when the American jazz giant was touring Asia.

Towards the end of the decade, Watanabe would also turn his hand to broadcasting, presenting radio programmes that would help promote jazz across Japan.

In 1972 he began broadcasting his own show called My Dear Life that he would present for twenty years.

Over the course of a long career the saxophonist has recorded prolifically, often with top drawer American players. His fusion albums, while attractive, are no match for his best work in a straight ahead bop session with sympathetic rhythm sections.

The album Round Trip recorded in 1976 finds the saxophonist crossing swords with Chick Corea, Miroslav Vitous and Jack DeJohnette on what is perhaps his finest recording.

Born in Manchuria 1929, Toshika Akiyoshi and her family lost their home when the Japanese were forced out of the territory after the second world war.

Returning to Japan, the family were unable to afford a piano for Toshiko to continue her studies so as a teenager she would play in the local clubs entertaining the troops and locals.

Her interest in jazz was ignited by a local record store owner who played her a recording of Teddy Wilson.

Her big break came when Oscar Peterson heard her perform while he was on tour in Japan in 1952. Peterson was so impressed that he persuaded Norman Granz to record the young pianist for his Verve imprint, and so with Peterson’s rhythm section of Herb Ellis, Ray Brown and J.C. Heard. 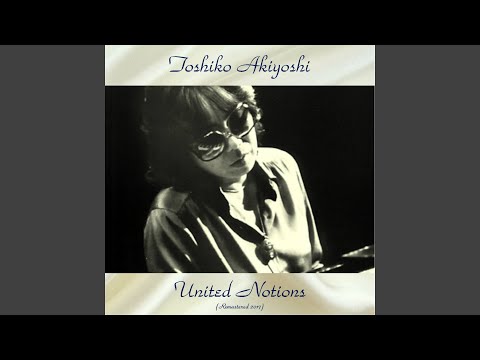 Toshika Akiyoshi became the first Japanese jazz artist to study at Berklee College of Music in 1956, being awarded a full scholarship.

After completing her studies at in Boston, she moved to New York in 1959 and, shortly after, married saxophonist Charlie Mariano. Playing around the clubs she soon established herself as a first rate pianist and formed a quartet with Mariano recording the fine Toshiko-Mariano Quartet for Candid.

Splitting from Mariano in 1967, Toshiko continued to build on her considerable reputation and, two years later, moved to Los Angeles with her new husband Lew Tabackin, and formed the Toshiko Akiyoshi Jazz Orchestra.

The band morphed into the Toshiko Akiyoshi-Lew Tabackin Big Band and over the years produced many fine albums that demonstrated what a fine composer and arranger she had become. Sadly, many of these were released in Japan only.

In 2003 Toshiko and Lew Tabackin played their final big band concert in Japan, but not before they had recorded the excellent Hiroshima: Rising From The Abyss a fitting conclusion to her career as arranger and composer.

Toshiko’s reason for disbanding the large ensemble was to be able to concentrate on her piano playing. This she has continued to do and documenting her work in a trio and solo setting in the intervening years.

Starting out on organ at the age of just two years old, it is said that Ozone was an accomplished improviser too by the age of seven.

After having studied classical music for organ, the young Ozone was turned on to jazz by hearing recordings by Oscar Peterson and consequently took up the piano.

Like many of his fellow jazz musicians from Japan, he too went to Berklee College of Music in Boston to study, graduating in 1983.

Attracting much attention from the tutors at the College, he was invited by vibraphonist Gary Burton to join his band. He went on to record three albums with Burton between 1984 and 2004.

No stranger to the international jazz scene, Ozone has had a successful career keeping such stellar company as Chick Corea, Christian McBride, Mike Stern and Branford Marsalis among others.

He also leads his own longstanding trio with bassist, James Genus and Clarence Penn on drums.

In 2004 he formed his Japanese big band, No Name Horses, taking the band on several successful tours across Europe, Asia, and the United States. 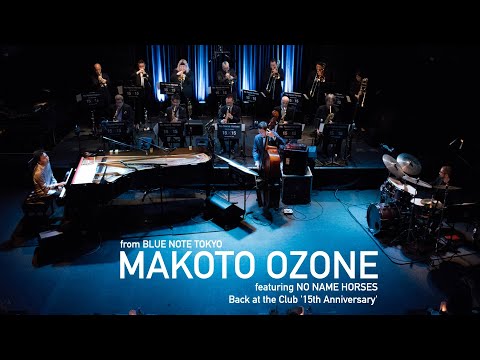 In recent years he has divided his time between his love of jazz and continuing interest in classical music and has performed on a regular basis with New York Philharmonic, and also by invitation with the San Francisco Symphony Orchestra.

Ozone was able to combine both disciplines when invited by director of the Scottish National Jazz Orchestra, Tommy Smith (with who he had played in Gary Burton’s Whizz Kids band), to arrange and perform music by Wolfgang Amadeus Mozart. For the concerts and subsequent recording, Ozone rearranged Mozart’s 9th Piano Concerto, also known as ‘Jeunehomme’ for which he was also the featured soloist.

Continuing his work in jazz, Makoto Ozone undertook a duo tour with Chick Corea in 2016, and again shared the stage with Gary Burton prior to the vibes maestro announcing his retirement from public performance in 2017.

In 2021, in celebration of his sixtieth birthday, the pianist recorded two solo piano albums, Ozone 60 featuring masterpieces by Mozart, Ravel and Prokofiev and Ozone 60 – Standards playing some of the best compositions from the Great American Songbook and jazz standards.

Pianist Masabumi Kikuchi is a somewhat elusive genius of jazz music, often overlooked, under-appreciated and even regarded as a ‘difficult’ artist to appreciate.

However, a little investigation and patience reveal a truly original musician, whose dogged determination to follow his own path produces some of the most spectacularly inventive piano improvisations of the last fifty years.

By the time of his death in July 2015, Kikuchi was beginning to receive acknowledgment of his unique contribution to jazz piano.

He absorbed influences from pianists as diverse as Red Garland, Andrew Hill and Thelonious Monk and melded them into a personalised ay of playing that also incorporated music from his native Japan.

If the jazz public were slow to pick up on Kikuchi talent as a pianist, then some of the great musicians that invited Kikuchi to work with them certainly knew just how good he was.

Over the course of his career, he would grace the bands of Miles Davis, Sonny Rollins and Elvin Jones. He also studied informally with Gil Evans and, whilst some of these meetings and associations were fleeting, Kikuchi ensured that he absorbed as much as possible from eachexperience and allowing it to filter into his own music in varying degrees.

One of the pianist’s longest and most productive association was with the drummer Paul Motian. Both musicians had an intuitive grasp of the other’s methods, and together they produced some of their most vital work over a working relationship that spanned more than two decades.

The trio that they co-led with bassist Gary Peacock, known as Tethered Moon, produced many fine albums as did the recordings for the Winter & Winter imprint under Motian’s name and leadership.

Since his death, there have been two solo piano recordings issued that have helped confirm Kikuchi’s position as one of the leading piano voices of his generation.

Black Orpheus was released in 2016 by ECM and is the last concert performance given by the pianist on October 26, 2012, and the last ever studio recordings made for Red Hook Records, Hanamichi: The Final Studio Recording was released in 2021.

Both are very different in terms of the material performed, and both are essential listening for anyone interested in the history of the piano in modern jazz.

Born in March 1979, Hiromi Uehara is a pianist and composer who has once again thrust Japanese jazz musicians firmly on the international scene.

Starting on the piano at the age of six, and becoming interested in jazz just two years later, the young pianist initially followed the traditional route of studying classical music, performing with the Czech Philharmonic Orchestra at just 14 years old.

Introduced to jazz by her piano teacher, Hiromi first listened to Erroll Garner and Oscar Peterson, and although it would be sometime later that she would turn more towards her interest in jazz her mind was always open to the intuitive nature of improvisation.

In 1999 she took up a scholarship to Berklee College of Music where she studied arranging and orchestration with bassist Richard Evans.

Evans who so impressed with Hiromi’s abilities that he took a demo tape for his friend to hear. That friend was none other than Ahmad Jamal, who was so taken with Hiromi’s demo that he went on, along with Evans, to produce the pianist’s debut album Another Mind that was released on the Telarc label in 2003

Since then, each subsequent album has been showered with praise and awards.

Her group Sonicbloom featured guitarist Dave Fiuczynski, Tony Grey on bass and drummer Martin Valihora, whilst she enlisted the services of bass guitarist Anthony Jackson and drummer Simon Phillips for her Trio Project which released albums in 2011, 2014 and 2016.

Hiromi has a reputation as a virtuoso instrumentalist and her music knows no stylistic boundaries. She is an energetic performer who music and stage presence are equally captivating.

You can read more about her in our guide to some of the most famous female jazz pianists to discover. 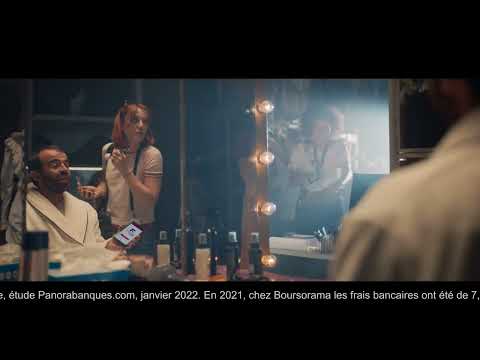 Of course, trying to do an entire country’s history of jazz justice in one short article is unrealistic, so please check back for our expanded edition soon, or head over to your favourite music platform to dive deeper into this topic.

We can also highly recommend the Jazz Japan Magazine.