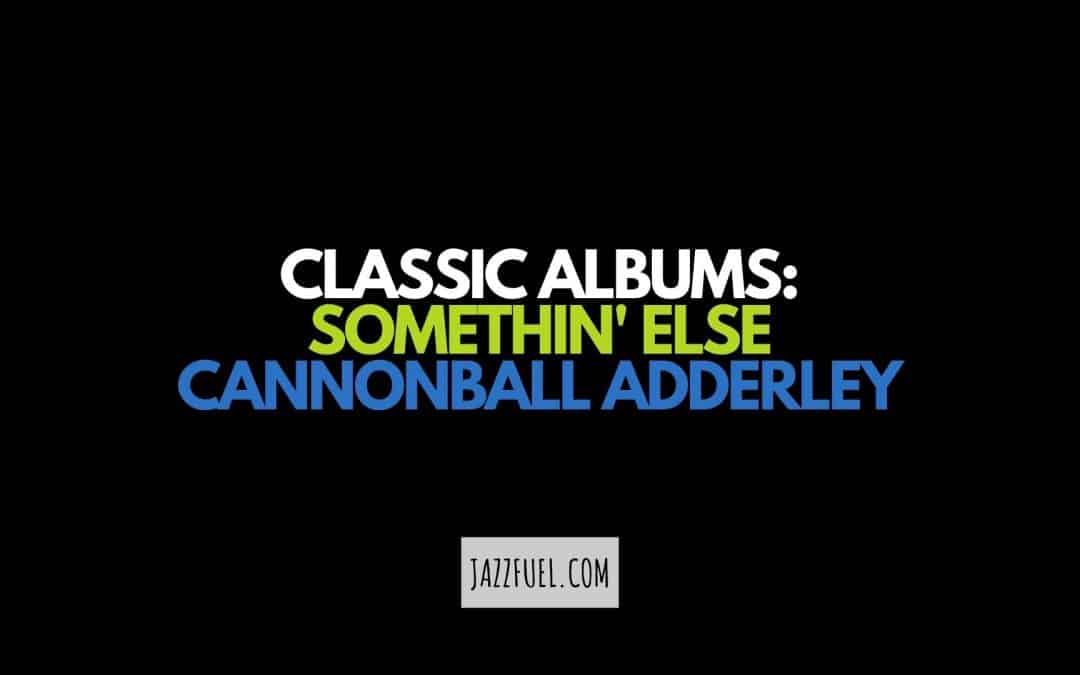 If you’re on the search for joyous alto saxophone playing, you probably need to look no further than Cannonball Adderley.

Whilst some of his most famous album contributions have been as a sideman, British writer Nick Lea takes a look her at one of his most enduring records as a bandleader: Something’ Else.

Julian Edwin ‘Cannonball’ Adderley’s arrival on the New York scene in 1955 not only caught everyone by surprise but also blew them away.

He arrived fully formed as a vibrant and mature alto stylist who would go on to record on some of the most influential albums in the history of the music, and not to be mention some classic albums under his own name too.

Born in Tampa, Florida on September 15, 1928 he received early musical training firstly at high school, where he acquired the nickname ‘Cannonball’ (a corruption of Cannibal due his prodigious appetite) and then at Florida A&M University where his parents held teaching posts.

Following in their footsteps, Adderley also taught and became band director at Dillard High School in Fort Lauderdale until 1950.

Eager to continue his own studies, Cannonball moved New York in 1955, originally with the intention of checking out the conservatories for a graduate course but instead fate intervened and his life would follow a very different path.

It is one of those stories that falls into lore, and it doesn’t matter how many times it is told it still retains an air incredulity. It is certainly a case being in the right place at the right time, but there is no element of luck in the career that would follow this most fortuitous of circumstances.

Carrying his saxophone case, Adderley waked into the Cafe Bohemia to hear some music, only to be asked by the band leader, Oscar Pettiford if he would sit in to replace his regular saxophone player who was late for the gig.

His performance that night created an air of excitement that spread around the jazz scene in New York City that the heir to Charlie Parker had arrived.

Like Parker, Adderley had an outstanding technique on the his instrument and a tone that was shot through with the blues. There was also a soulful edge to his playing that would, in later years, soften the hard bop language into the gospel and soul influenced jazz of the sixties.

In 1957 his fortunes were to change again.

The saxophonist had formed his own band with his brother, Nat Adderley, on cornet and had signed a record contract with Savoy Records after his success at Café Bohemia.

With several albums under his belt for Savoy and EmArcy/Mercury, Miles Davis came knocking on his door. Not being able to turn down such an opportunity, Cannonball put his own quintet on hold staying with Miles from October 1957 to September 1959.

During this time, the saxophonist would perform nightly with Davis’ Sextet, John Coltrane would shortly re-join the band having kicked his drug addiction, and record on two of the trumpeter’s seminal albums, Milestones (recorded April 1958) and Kind Of Blue (March/April 1959), and would recall of his time with Miles.

“Jazz has no place for stagnation. I know one thing for sure. You can’t repeat yourself night after night when you’re working with Miles Davis. Miles and Coltrane are creating all the time and the challenge is tremendous…Miles group is at is should be. It’s a laboratory. New and exciting music is played each night… I learn so much being around him.”

Before the session for Milestones, Cannonball had his own record date for Blue Note and Miles did him the honour of playing sideman to his saxophonist.

The resulting album, Somethin’ Else is one of the classic albums, and upon its release divided opinion on whether the trumpeter dominated the record, and thus taking the shine away from Adderley.

The truth is perhaps rather different with the benefit of hindsight, and knowing how the careers of each of the two musicians would develop in the years that followed.

Listening to the album again reveals how much respect Miles had for Cannonball, and while it is easy to jump to the conclusion that the trumpeter was the driving force behind the success of the record (Davis is arguably at the peak of his powers at this point in his development and playing magnificently).

However, careful listening brings to the fore the difference in their approach to the material and how this complements and elicits the best from both musicians.

This contrast also build tremendous tension that is almost palpable, and it is to the credit of the rhythm section that the differing approaches of the two horns are resolved and supported so ably.

The original album consisted of five tracks, three of which were standards and two original compositions. One a piece by Miles and Cannonball.

The opening jazz standard ‘Autumn Leaves’ would be a staple in the trumpeter’s repertoire for many years, and is a wonderful performance that serves to demonstrate superbly the contrast in, and compatibility of the playing of the two men.

From the rather austere opening chords from pianist Hank Jones and the horns, to the melancholy statement of the theme by Miles to Adderley’s effervescent solo with his blues drenched alto sound.

Miles follows on muted trumpet and his solo is a beauty. A model of restraint, his solo is economy in motion, throwing the alto solo into stark relief. This restraint and is then imposed on Hank Jones who also produces a solo that is devoid of any superfluous notes or gestures.

The piece plays out with muted trumpet reprising the theme before one again the opening chords return albeit with a lighter feeling to draw the piece to a close. Davis seems t have the final word with a second solo as the piece concludes.

This is immediately followed by ‘Love For Sale‘ (another Davis staple) taken a bright and breezy tempo with the trumpeter once again using the Harmon mute.

After the tune is stated, Blakey kicks things up a notch setting this up for Cannonball’s typically joyful and euphoric solo.

The trumpeter does not solo on this track but his playing is vital to the performance creating a perfect counterbalance to the saxophonist’s quicksilver outing.

The title track, written by Davis, has a short punchy theme using alternating phrases from trumpet and alto. Putting the Harmon mute to one side, Miles plays open horn is an expensive and uplifting solo that is superbly driven along by Sam Jones’ propulsive bass-line and the forceful, swinging drumming from Blakey.

Following Miles’ majestic solo, Cannonball sounds a little glib as if waiting for inspiration to arrive.This it does in the form a glorious two horn dialogue that lifts the altoist to new heights.

On his own composition, ‘One For Dady-O‘, Adderley is once again back to form. The tempo is less frenetic, and the alto is suitably relaxed and full of intention.

This time it is the trumpeter that takes the second solo and does so with a graceful and perfectly weighted offering on open horn.

The album closes with a ballad in ‘Dancing In The Dark‘ by Howard Dietz and Arthur Schwartz. Miles sits this one out, and Adderley treats us to a beautiful reading of the tune, and equally gorgeous solo to match.

Sounding relaxed, the saxophonist allows his sensuous lines and sweet tone of his alto to enthral. Blue Note reissued the album on CD in 1999  as part of RVG Editions series which was remastered by Rudy Van Gelder, and included an additional “bonus” track entitled ‘Bangoon’ written by Hank Jones.

However, the title was incorrectly listed as ‘Alison’s Uncle’ as prior to the session Nat Adderley’s wife had given birth to a daughter named Alison, and thus Cannonball became Alison’s Uncle.

The theme is extremely attractive, and seems more suited to the hard bop of the day, and Art Blakey almost manages to hijack the track with his playing.

The result is a fine piece of music making but ultimately sounds more like a version of the Jazz Messengers than the feeling of the originally issued titles; however this does not detract from the inspired performances on this classic album from one of the music’s finest alto saxophonists.