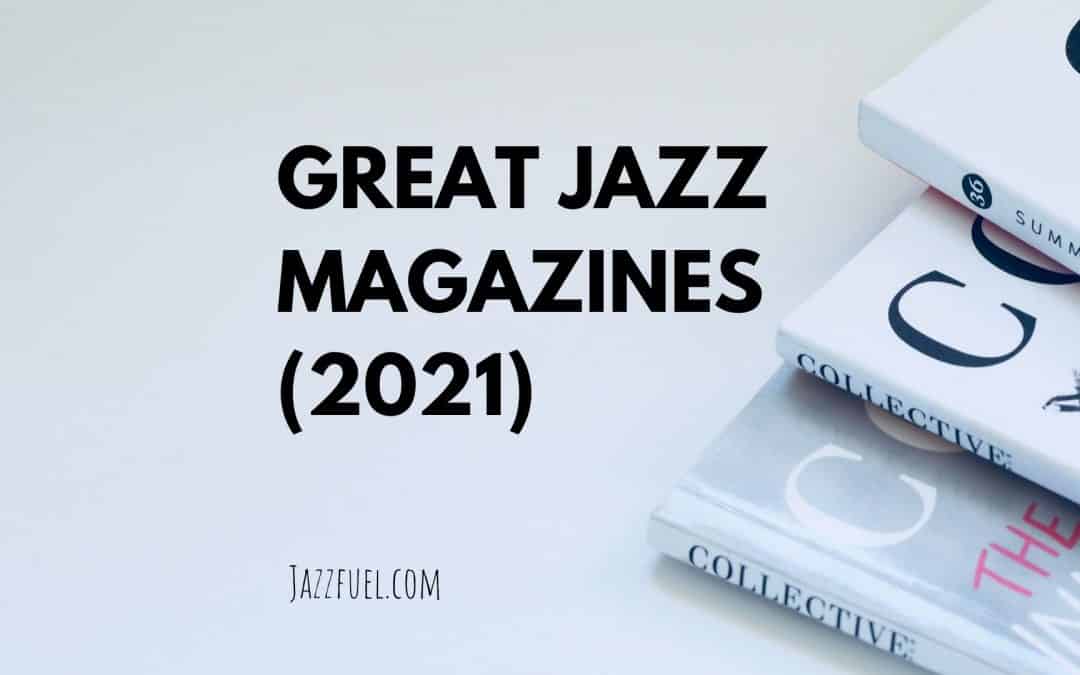 Here’s the Jazzfuel rundown of 10 of the best jazz magazines from around the world that you can still read in a physical format.

Whilst there are many jazz websites and blogs out there providing the latest gig listings, album reviews and news from around the world, sometimes nothing beats the smell of a new magazine and the chance to switch off your phone and laptop and digest some quality content, distraction-free.

Through our work running press campaigns for jazz musicians, we’ve come across many jazz media outlets and want to highlight 10 of the best magazines here, for you.

Of course, there are many more than that out there, so feel free to add your own suggestions in the comments section at the end and we’ll be adding some extra ones soon…

Running since 1997, Jazzwise is the biggest selling British jazz monthly and has been crowned Jazz Publication of the Year at both the Parliamentary Jazz Awards and the Ronnie Scott’s Jazz Awards as well as Best Jazz Media at the Jazz FM Awards.

Its in-depth interviews and features often include the biggest names in international jazz (recent memorable front covers include Sonny Rollins, Esperanza Spalding, Kamasi Washington & Snarky Puppy) but there is a strong focus on the UK jazz scene too. The ‘Taking Off’ column presents 2 new artists each month and there’s also a comprehensive gigs guide, industry gossip column and reviews section.

“While magazines are ‘old media’ pretty much every musician loves an article in print! I think there’s something about making it into print that says something about the quality of the work presented – it means an artist has developed to a serious level to stand out from the crowd – and the writers we use have very often written about jazz for a long time, written books on jazz and are often musicians themselves.”

Check it out at jazzwise.com

Possibly the most established and well-known jazz magazine in the world, Downbeat has been in circulation for than 80 years! Established in Chicago by Al Lipschultz, it was named Jazz Publication of the Year in 2016 and 2017 by the Jazz Journalists Association.

Alongside the usual in-depth articles, reviews, news stories and features you’d expect from a magazine of this quality, Downbeat is perhaps best-known for its annual critics poll, which will mark its 68th edition in 2020.

Around 150 jazz journalists from around the world vote on more than 50 categories which are generally split into instrument-specific versions of both ‘best‘ and ‘rising star‘ as well as categories for producers, big bands, arrangers, albums & jazz groups. Check out the summer 2019 results here.

Check it out at downbeat.com

They’ve published more than 125 editions of the magazine to date and the list of artists on the frontpage usually presents features from big name American jazzers, established German talent and a who’s who of the European jazz scene.

If you’re not a German speaker, it’s still worth checking out their website (thanks Google Translate!) for some of the magazine highlights plus featured videos – or even to buy the physical magazine to see the upcoming gig listings if you’re planning a trip or a tour in Germany.

Check it out at jazzthing.de

Those of you familiar with the European jazz scene will know that Poland is a huge territory presenting a really broad range of music – both international and domestic.

In contrast to most others on this list, Jazzpress started out first as a jazz website and e-magazine, before launching a free, bi-monthly paper edition less than 10 years ago.

With the look and feel more of a newspaper, it provides a comprehensive run down on what concerts are happening on the Polish jazz scene, as well as music from further afield.

According to the editorial team:

“JazzPRESS is not only jazz media, but above all an environment gathering enthusiasts of jazz – journalists, music lovers, organisers, promoters, and sometimes also musicians willing to act for jazz in Poland”

Check it out at jazzpress.pl

Based in Paris and running since 1950, this is the leading French-language jazz magazine in the world, covering both new releases, as well as stories from jazz history. Recent front covers, as an example, have featured the 50 best jazz singers of all time and a profile of Chet Baker film ‘Chet’s Romance’.

Jazz Magazine consolidated its position as the go-to print publication for jazz in France in 2009 when it absorbed the long-running monthly Jazzman.

As you might expect, alongside in-depth profiles of international legends (McCoy Tyner’s death led to a 15 page hommage!) it also gives a great insight into the exciting modern jazz scene in France.

Check it out at jazzmagazine.com

Coming out of Boca Raton in Florida, Jazziz magazine celebrated its 35 birthday in 2019. Its now-quarterly print issues are glossy & stylish (“they bring the stories behind the music”) and, alongside that, they’ve developed an in-depth offering for digital subscribers who receive daily features, reviews, music and video streaming.

This development into 2022 and beyond is perhaps unsurprising; Jazziz was the first magazine in any niche to put a CD on the cover and has regularly evolved over the last 3 decades to keep up with the latest in jazz and audience demand.

Check it out at jazziz.com

Founded in 1945 by journalist Gian Carlo Testoni, this Italian monthly magazine is one of the world’s longest-running jazz magazines with more than 750 editions!

Many of its cover stories are heavily influenced by the American jazz tradition – both current legends (Wayne Shorter, Pat Metheny…) and historical figures (Jaco Pastorius, Tony Williams…) – with others focused on the biggest names on the Italian jazz scene (Enrico Rava, Stafano Bollani).

The magazine has long been recognised for the high quality of its jazz photography – something it continues to this day.

Check it out at musicajazz.it

Discover: our list of the best jazz clubs in Italy

Published 6 times per year, this Dutch jazz magazine pays attention to a wide range of jazz from the international and domestic scene.

Despite being a relatively small country, there’s a vibrant and busy jazz scene in The Netherlands (heard of North Sea Jazz Festival anyone?!) and Jazzism provides a great window into the clubs, venues and festivals that are going on.

You can read some of their reviews and features via the digital magazine (such as this review of the NuHussel Orchestra, from a campaign we worked on) but the print version is still recommended for the full experience!

Check it out at jazzism.nl

Based in Warsaw and in existence since 1965, Jazz Forum was one of the first jazz magazines published behind the Iron Curtain – allowing Polish culture, under a communist regime, to reach the West.

For many years it had three different language editions with an international distribution: English, Polish and German but, since 1992, is only in Polish.

Currently published 8 times per year under the guidance of editor Paweł Brodowski, it positions itself as “the European jazz magazine” – perhaps due to the fact that it was made the official publication of the European Jazz Federation in 1969.

According to its editors:

“In addition to jazz, you can also find articles, interviews and reviews in the field of blues, world music, rock and other genres of contemporary music.

Check it out at jazzforum.com.pl

Whilst every magazine in this list reaches far beyond it’s borders when discovering music to review and artists to interview, Jazz in Europe is perhaps the only one which doesn’t place itself in any one country.

Published in the Netherlands, edited by a British person based in France and with writers all around the continent, it is a truly European enterprise!

As with many modern jazz magazines, Jazz in Europe is built around its website, which presents traditional reviews, jazz interviews and features alongside more digital-only strands like a new releases playlist and video premieres.

The print edition comes quarterly, in line with the 4 seasons, and is a full-colour glossy publication available to order-on-demand.

According to the editorial team:

“Our goal is to spread the word about all the great jazz talent and happenings in the European jazz scene to the broadest audience that we can reach. Our focus is truly worldwide and this is represented by our large global readership.”

Check it out at jazzineurope.mfmmedia.nl

So there you have our run down of some of the best international jazz magazines to check out in 2022.

Whether you’re a jazz musician looking to get press coverage and book some gigs, or a jazz fan looking to uncover some hidden gems, hopefully this list will point you in some good directions!

Of course, it’s by no means a comprehensive list and was based on the magazines and editors that we’ve got to know through our press work over the last couple of years. If you have others to suggest, feel free to add in the comments section here!