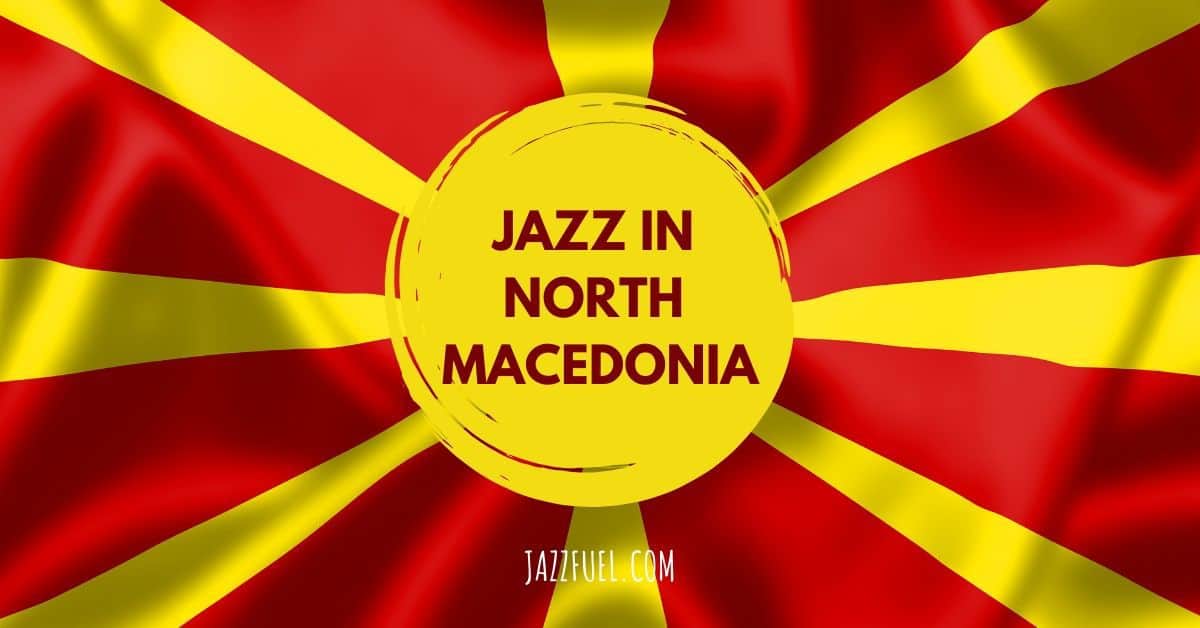 When it comes to touring in Europe there are many smaller countries which, whilst not as ‘famous’ on the international jazz circuit, provide some great opportunities for performing at clubs and festivals in front of enthusiastic and discerning jazz fans. We’re going to focus on just one of those today, with this guide to jazz in North Macedonia.

For those of you who haven’t kept up to date with your Balkan geography, the Republic of North Macedonia is the new (since 2019) name for the county previously known as Macedonia. Situated in South East Europe it has borders with Kosovo, Serbia, Bulgaria, Greece and Albania. As such, you could quite easily do a 6-country tour in 6 days!

Its capital city of Skopje hosts an autumn festival which, for more than 30 years now, has been bringing some of the biggest names in jazz to Macedonia. But, alongside that, there’s a whole range of venues and festivals to discover.

Big thanks to Jazzfuel friend Saso Popovski for his advice on putting this together. He’s a Skopje-based jazz guitarist, professor at the University of Goce Delchev in Shtip and artistic director of the Jazz Factory Festival in Bitola.

Ohrid’s Jazz Inn is Macedonia’s oldest and arguably most famous jazz club, It opened in 1989 and has been family run ever since, with three generations of owners contributing to the cultural scene in this lake-side city.

As one of the only jazz clubs in the Balkans that has never been closed, it’s won many prizes and accolades from companies like TripAdvisor and Lonely Planet.

From traditional to contemporary and even free jazz concerts, Jazz Inn Ohrid has welcomed international artists including the likes of Oscar Salas, Christina Diaz Trio, Zvonimir Tot and Vasil Hadzimanov.

Check out the Jazz Inn here

Porta Jazz is pretty much a synonym for live culture in the Southwestern town of Bitola. Opened in 1993 as an underground venue, it’s become a mainstream place for live jazz today.

Something of an architectural gem, it’s built across two floors with a big stage in between, offering a unique setting for the artistic performances.

Musicians such as Greg Hopkins, Dave Wilson, Theodosii Spassov and Toni Kitanovski have marked jazz club’s history and transformed it into a sought-after place for album release shows.

Since 2012 the Brooklynski Jazz Bistro has been an essential part of the Macedonian capital Skopje’s nightlife – as well as a cosy escape from the busy city during the day.

Famous for its award-winning wines which are carefully selected and stored in their own winery, it transforms at night into a dimly-lit jazz club that brings to mind the authentic spirit of New Orleans in the heart of Skopje’s Debar Maalo neighbourhood.

As the only jazz club in Strumica, Depo Jazz Club has, since 2017, been presenting a programme of mainly straight-ahead jazz standards, alongside some special events for album releases and international tours. The friendly owner has built a loyal audience of jazz fans that frequent this North Macedonian jazz club.

Held in the capital of North Macedonia, Skopje Jazz festival has been running since 1982 and is one of the biggest cultural events in the country, as well as an established member of the European jazz festival circuit.

Led by artistic director Oliver Belopeta (interviewed here for Balkan Insight), it presents a colourful line-up of jazz artists – both international and local – across a broad range of jazz styles.

Since 2002, the organisers have been organising a 2nd event – OFFest – which presents a variety of music touching styles such as ethno, folk, roots, urban, contemporary and experimental sounds.

Finally, cementing their status as one of the leading jazz initiatives  in the region, Skopje Jazz Festival also runs SJF Records. The label was created to support up-and-coming jazz and world talent from Macedonia and has released more than 40 albums so far.

This Macedonian jazz festival was originally created in 2011 as annual workshop for young people to learn the basics of jazz and to develop their interest in improvised music.

This inventive gathering has spawned many long-term collaborations from the participants, who continue working together long after the event.

Since 2018, Bitola’s Jazz Factory Festival has evolved into an international festival, whilst still focusing heavily on supporting Macedonian jazz artists.

Musicians who have performed at the festival include: Theodosii Spassov, Toni Kitanovski, Vasil Hadzimanov, Dusan Jevtovic, Viktor Filipovski and many more.

Find out more about the Jazz Factory Festival: www.jff.mk

Held in the city of Tetovo every September since 2014, this jazz festival offers a range of jazz concerts featuring both home grown talent and top European jazz musicians.

The organiser’s goal is to not only bring together jazz fans, but also to support the work of Macedonian jazz musicians by promoting their latest initiatives and projects.

In existence since 2009, Astibo Jazz Festival is run by the  Dom Na Mladi Stip cultural organisation with the primary goal of promoting high quality jazz from Macedonian musicians, as well as from the international community.

Over more than 10 years, the festival has built an audience of loyal and educated jazz fans who support the concerts.

As one of the leading cultural events in the Eastern part of Macedonia, Astibo Jazz Festival plays its part in educating young musicians through close relationships with the city’s music school.

One of the newer European jazz festivals, this event was launched in the Kumanovo district of Macedonia 2017, where it’s been contributing to the modern jazz and culture scene ever since.

The festival is aimed at providing a platform for contemporary jazz music in the region, both via homegrown Macedonian artists as well as their international counterparts.

This has its beginnings in the recording industry: it was originally conceived as a record label that to date has published about 10 albums of Macedonian jazz musicians working in the contemporary and Avant-grade genre.

The need to promote this releases was the launchpad for the festival idea to create this festival. It’ is a special type of festival that’s held in several cities around the country with concerts organised in partnership with local jazz clubs.

Over the last 2 years, the Jazz Fortnight Festival has presented local Macedonian musicians in cities such as Skopje, Bitola, Ohrid, Kavadarci and Kumanovo.

Find out more about the Jazz Fortnight Festival here: jazzfortnight.com

As an extra way to get to know the jazz scene and history in Macedonia, we picked a few musicians to highlight. Hopefully this can lead you on a journey of discovery!

Born in Skopje in March 1931, Shpato was a self-taught multi-instrumentalist, composer and arranger who was an early pioneer of jazz in Macedonian.

Deeply involved in building the modern Macedonian music scene after the second world war, he founded and led the Macedonian National Radio Television Big Band and was credited as writing the earliest jazz composition in the country – Teme I – in 1947.

Across a carer of more than 40 year he wrote over 6,000 arrangements and many of his compositions are still performed today by local artists and ensembles.

As a jazz educator, countless improvisors, singers and composers studied with him and went on to become important contributors to jazz culture themselves.

His legacy is kept alive through creative work of his students (including guitarist Toni Kitanovski, one of the leading figures of jazz in Macedonia today) and two of his sons who are both based in Germany: double bass player Martin Gjakonovski and trombonist & music educator Neni Gjakonovski.

Born in Bitola in March 1945 , Dimitrovski was a famous Macedonian jazz trumpet and flugelhorn player.

He joined the Skopje Radio Big Band whilst still in his teens before moving to Belgrade in 1967 where he later became a member of the Big Band Radio Television Belgrade and worked frequently with the Novi Sad Big Band as a conductor and soloist.

His profile in the region saw him perform with international stars including Freddie Hubbard, Clark Terry and Frank Rosolino, as well as appaearing at European jazz festivals such as Pori Jazz Festival, Belgrade Jazz Festival and Ljubljana Jazz Festival.

From the early nineties until his death, Goce Dimitrovski lived in Skopje and worked in the RTV Big Band as a soloist and conductor, as well as being very active on the Macedonian jazz club scene.

Born in Skopje in 1964, Tony Kitanovski is a renowned Macedonian jazz guitarist and composer.

Although jazz is his first love he is equally active in wide variety of styles including world music, classical music, contemporary dance, hip-hop and music for film.

Currently head of the Music Academy at the University of Goce Delchev-Stip, Kitanovski started his musical education with Dragan Spato Gjakonovski as a teenager (learning from the Macedonian jazz legend for 8 years) and also studied on a full scholarship at the prestigious Berklee College of Music in Boston, where he stayed for 10 years.

His debut album, One For Charlie (SJF Records) was released on hi return to Macedonia and the collaboration with that record label continued with future releases including Duet, Boston, 3 x 3 and Big City Scare.

Toni’s fascination with the gypsy music tradition from his native Skopje (which has largest Roma community in Europe) led to him forming Toni Kitanovski & Cherkezi Orcestra which went on to release 2 albums on Enja Records and toured through some of Europe’s most prestigious jazz clubs and festivals.

Born in Skopje in 1970, this Macedonian-born bassist moved to Germany in early nineties where he is considered one of the most prominent jazz players in Europe.

With a jazz singer mother and a father who founded the Macedonian Radio Jazz Big Band, Gjakonovski comes from a musical family indeed and first learnt violin as a young child, before moving onto double bass in his early teens.

Gjakonski studied at the Cologne University of Music with Reiner Linke and Dieter Manderscheid in the early 90s, where he had the opportunity to attend masterclasses with jazz greats such as Reggie Workman, Arild Andersen, John Clayton, Mike Richmond and Eddie Gomez.

His authentic, versatile playing has brought him to the most diverse jazz scenes from avant-garde to mainstream to world music and, in the last 25+ years, he has recorded more than 120 albums with a range of projects. Just a few of those names include Bob Berg, Bireli Lagrene, Richie Beirach, Benny Golson, Charlie Mariano and Adam Nussbaum.

Born in 1977, Saso Popovski is a Macedonian guitarist & composer who is currently head of jazz at the University Goce Delchev-Shtip music academy.

Across a professional career which has spanned more than 20 years he’s also collaborated with many famous jazz musicians including Toni Kitanovski, Oscar Salas, Milcho Leviev, Dave Wilson and Goce Micanov and written for film & theatre.

“The music of Saso Popovski is one of pure lines, concluded structures and lush imagination” – Mario Batelic, Cerkno Jazz Festival

Hope this guide provided some useful insight into this small but happening Eastern European jazz scene. If you’re looking to discover more live jazz clubs and festivals, you can check out these guides to New York, Paris, London & Italy.

If you know the jazz scene in North Macedonia and would like to add recommendations, feel free to use the comments section below.